Why this upcycling couple built their colourful, 100sqm eco home next to a train track Two bike-loving upcyclers have built an eco home that is off the rails in suburban Auckland — but only just.

There’s a rhythm to life in Jessica Rose and Callum Dowie’s Avondale home.

First a toot, then the rattle as the Western Line commuter train chugga-chuggas past marking the cadence of rush hour in 10-minute intervals. The conversation pauses, the kombucha SCOBY wobbles in its jar on the kitchen bench, the sunflowers and corn in the garden sway — then the chatter resumes.

In 2014, when the Auckland couple saw the triangular trackside section for sale with its rumpty old ramshackle cottage, there were no other prospective buyers. From inside they watched another young couple pull up and take one look before speeding off like Bruce McLaren from the starting line. Jessica and Callum’s home, with its Mondrian-like windows, is the first step of many they are taking on the path to a lighter footprint.

“You can barely hear it,” said the real estate agent, bracing herself in the corner to stay upright as a diesel train rocked the little shack to its foundations. Jessica and Callum weren’t deterred.

This location close to the city would have been beyond their budget if it weren’t for the train tracks, so they’ve learned to live with them.

“One of the most important things for us when buying was being near public transport and we couldn’t really be closer,” says Jessica. “We’ve embraced train life. Families with young children call this ‘the choo-choo house’ and friends who live in Taupaki and Mt Albert listen to the same freight train go by late at night. 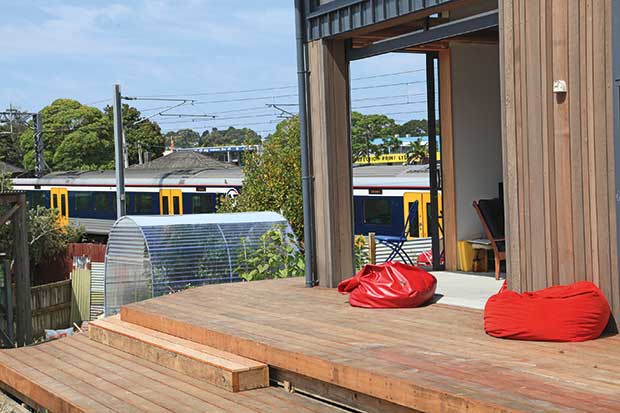 The couple grow their own fruit and vegetables, and keep three chickens which are not fazed by the passing train.

Rather than being a disturbing noise, it’s a nice thing that connects us. The train in the evening is like an alarm clock, telling us it’s bedtime.”

The section was perfect; not so the old railway worker’s cottage on it. Callum, an associate at Jasmax Architects in Parnell, and Jessica, a senior administrator with Unitec’s housing project, designed their house together to meet environmentally sound principles.

While Callum drew the plans and Jessica had lots of input with quirky flourishes, the process wasn’t without debate. “Callum, being an architect, designed a kitchen with no cupboards,” says Jessica.

“Well, it was an aesthetic direction,” counters Callum.

“I showed him how many pots we had and he added kitchen cupboards,” she says.

For two years now, the couple has been drilling, nailing, bolting, hammering and sanding, together creating their 100sqm home.

Callum took off four months from work and his dad Dennis, a retired architect, lent a hand. Meanwhile, Jessica worked on the house in the evenings and during the weekends while holding down her full-time job and being a member of the Albert-Eden local board. 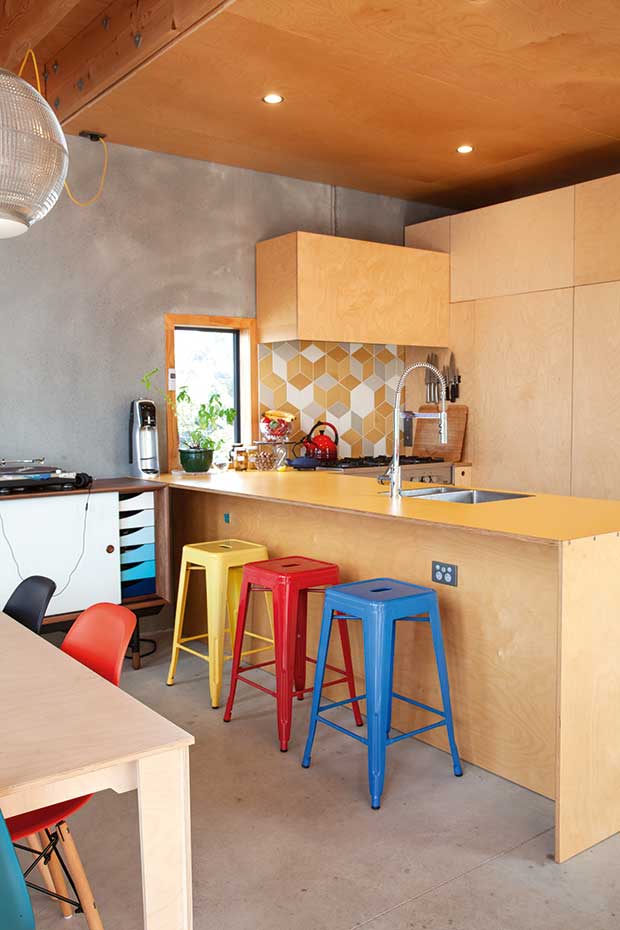 What they could not do themselves was operate the 130-tonne crane which dropped in the 12.7 tonnes of insulated concrete panel that makes up the continuous wall along the south side of the house. Getting permission to operate the crane near the train tracks was intense due to the risk of electricity arcing between the nearby power lines and the train, or the load being dropped on a passing train.

What they saved on labour costs, they spent on energy-efficient features such as Mammoth insulation made from the fibres of recycled plastic bottles, and a retractable insulated door.

Passive house elements include: north-facing windows to maximize warmth captured in the concrete floor; windows at the very top of the house and low to the floor to create maximum air circulation with the stack effect distributing heat; a metal SIPs roof and precast concrete panels providing good insulation through thermal mass. The 100sqm home has passive-house features including windows up high and close to the floor which create a heat-exchange effect.

One of Jessica’s flourishes is the razzle-dazzle of yellow, blue and red double-glazed windows making a Mondrian-style pattern similar to the famous modernist Eames house in Los Angeles.

More stories you might like:
Welcome to Rockwood: A glamping retreat and train carriage are the newest arrivals to this high-country station

Eco-considerations go beyond their own use of resources as the couple look at their impact on the wider environment. Capturing rainwater in two 7000-litre tanks (for the toilet and washing machine) not only saves money but reduces the stormwater load.

“In a rainy country, this is only one idea to manage our water resources better,” says Callum. 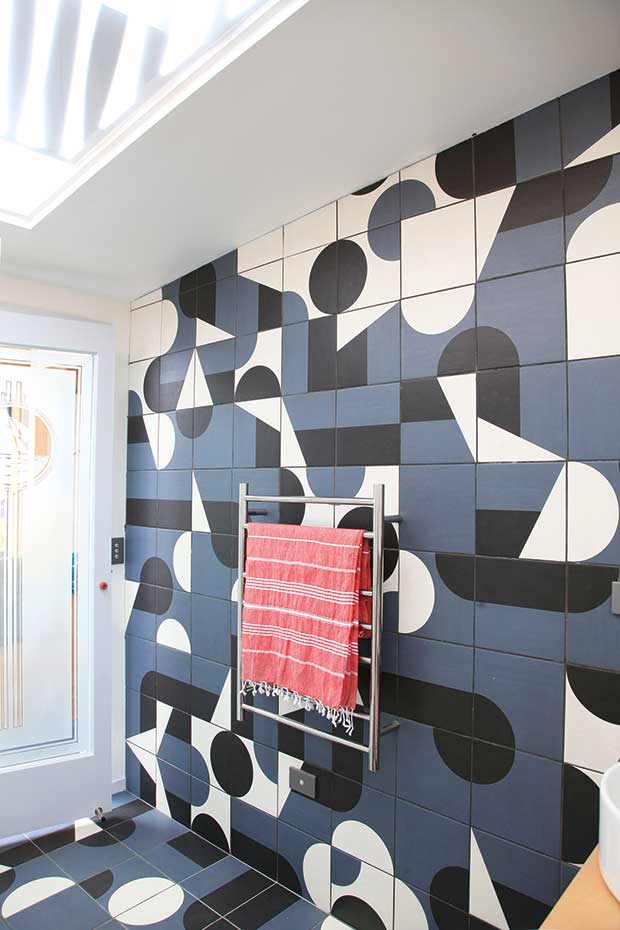 Their home is the first step of many they are taking on the path to a lighter footprint. They are keen gardeners growing veggies, passion fruit, citrus, persimmon and berries and they keep chickens for eggs.

On weekends, Jessica is likely to be making beeswax food wraps, bottling ginger beer or obsessively pickling onions in an effort to perfect a family heirloom recipe. Or she’s out on her e-bike with either Callum or a group of likeminded girlfriends called Frocks on Bikes who put on their glad rags to ride around the city. No boys, no Lycra. 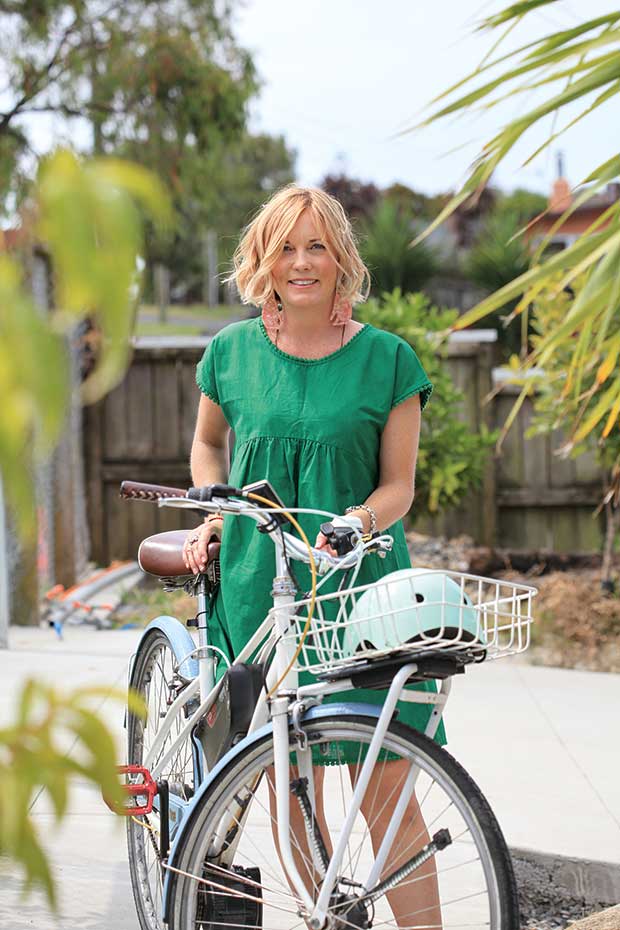 “Biking is fun and social, but also the way I get around. I bike or use public transport 80 per cent of the time. We live in a city, but that doesn’t mean I have to sit in gridlocked traffic every day. It’s not good for my mental health or the health of the planet, with car emissions.”

An “important” design consideration for Callum was having a deck where he could enjoy a beer after a hot cycle home from work (craft beer, of course). But the street-facing deck serves another purpose and is aligned with principles of urban activism. Jane Jacobs, author of The Death and Life of Great American Cities, argues that safer communities come from having a vibrant street culture. 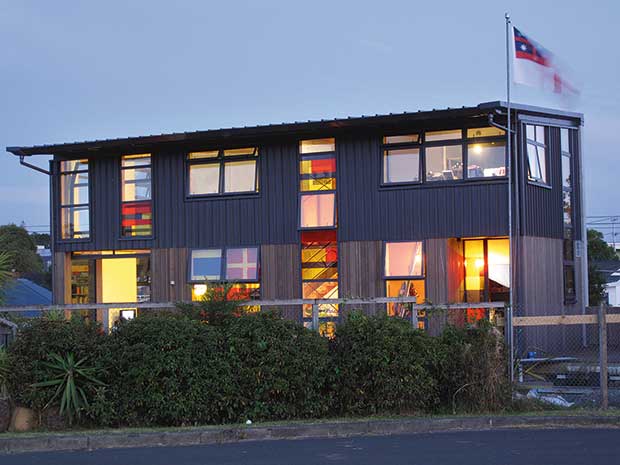 Jessica taught herself how to lay the Mondial tiles by watching video tutorials on YouTube. New Zealand’s first flag (the United Tribes flag) flies outside the house.

“Many people have their deck hidden at the back of the house but by having our deck and living room facing the street, we’re trying to make our house approachable to others,” says Callum.

“I think it’s worked too,” adds Jessica. “People have seen our house from the train, then walked the streets of Avondale for a couple of hours to find us and ask about the design.

“Our house is quite small, but that doesn’t mean we live small. We only have a small patch of lawn because we prefer to grow food. Who wants to mow lawns anyway? If I want grass, I’ll go to the park.”

There’s a touch of Paris in Jessica and Callum’s home. Where possible they’ve used secondhand or upcycled items and that includes the glittery 1950s light in the living room, once a Paris streetlight, bought from The Vitrine in nearby Morningside.

Jessica’s boardgame collection and their books are on shelving from a library and the television stand is a 1970s stereogram cabinet gifted by a friend. The stairs are made from off-cuts of framing timber and, in the garden, untreated native timber salvaged from the original cottage was used to make planter beds.

TALK OF THE TOWN

Urbanism is the study of built environments and the mental and social impact of city planning on people.

“Cities are exciting places to live,” says Callum, “and good planning can mitigate density.” He cites densely populated Copenhagen with its common green spaces as a prime example.

“A large house and a large front lawn won’t make you feel safer or more connected. It’s the community around you that does.”

This is an extract from our new special edition In Your Backyard: Living Lightly