The ultimate guide for growing, sowing and harvesting dill Dill is often confused with fennel, but if you love to cook, you need to know the difference.

Last season I sowed dill (Anethum graveolens) in my garden for the first time. I gave them plenty of space, fertilised the soil, and waited for the marvellous ferny fronds to scent the air with dill-iciousness. It didn’t happen. When I inspected them, the leaves were curled over and unrecognisable. A barrage of aphids delivered their last rites.

Determined to succeed, I sowed more seeds in four different sites. Naturally, it was the seedlings I forgot about that thrived, hidden behind a sprinkler, nestled beside a tall Italian parsley plant.

Since then, I’ve read that dill developed as a ‘field plant’ in the wild and prefers to grow amongst other plants. By the time the cook discovered them, there was plenty ready to harvest.

1. Once dill finds its ‘happy place’, it’s a pleasure to grow. In the morning, the fine, blue-green, feathery leaves sparkle with dewdrops. As the sun heats the leaves, and you brush past it, a pungent aroma is released, a mix of anise and parsley, with hints of celery and citrus.

2. The flat, bright yellow flowers are decorative and fragrant, delightful among marigolds in your vegetable beds. The flowers are a super-food for beneficial insects, such as parasitic wasps.

3. Nothing is wasted – all parts of the plant can be used.

4. Dill doesn’t keep well and is best harvested and used straight from the garden. It will be fresher, tastier, and have a longer shelf life than leaves bought from a supermarket.

Why grow dill if you have fennel?
Some people argue you don’t need dill if you have the perennial fennel (Foeniculum vulgare) in your garden. Not according to chefs. While fennel can be substituted, its flavour is much sweeter, with a definite anise taste, and doesn’t give you the same effect.

Dill is pungent, with a pleasant sour tang and just a hint of aniseed, and many cooks prefer its more refined flavour. At first sight, the two plants look similar. However, dill has feathery, blue-green leaves, while fennel has yellow-green leaves.

Dill is a smaller plant (up to 90cm) with a single stem; fennel is multi-stemmed and will grow to 1.5m. The two plants should be kept apart, especially if you’re saving seed, as they cross-pollinate, with fennel more dominant. 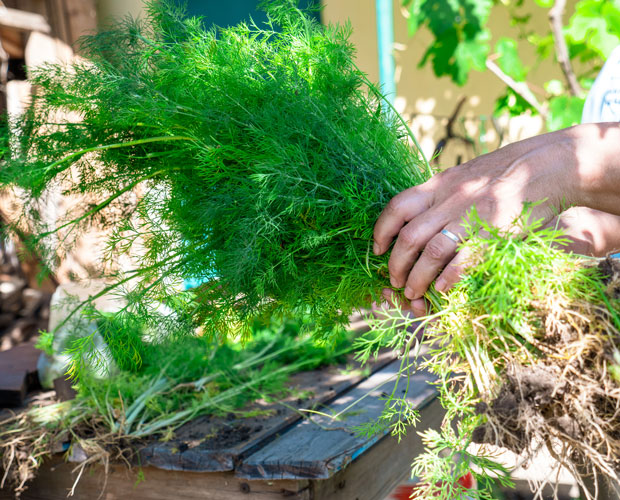 HOW TO GROW DILL

Dill is a short-lived annual, and the only way to grow it is from seed. If possible, source a slow-bolting, more compact variety such as Lena or Vierling.

Choose a sunny site, protected from wind, with well-drained soil, enriched with compost – dill doesn’t like being hungry or thirsty. Plants are tender, and the taproot is easily damaged, so sow it directly into a bed of finely tilled soil. Sow in blocks, so the hollow-stemmed, top-heavy plants support each other, or near to other companionable plants (except fennel).

Sow every 4-6 weeks, starting as soon as soil is warm enough for a continuous supply. Seeds germinate best when it’s 15-21°C. Thin seedlings to 20cm apart, so their hollow stems support each other. Moisture is key. With good moisture throughout its short growing season, dill will reward you with abundant, healthy foliage; without, it quickly goes to seed. It’s worth experimenting with a few different sites – plants will soon show their preference. If you hit the right spot, allow plants to self-seed; next season, you may not have to sow as the dill will do it for you.

Fresh dill should be bright green and have no yellow or pale green colour in the leaves. Harvest close to the stalk from when plants are 15cm high until the first flowers appear. Avoid older, darker leaves that have poor flavour. Snip flowers for pickles when heads are beginning to form seeds.

HOW TO HARVEST SEEDS

Harvest when half the seeds on each umbel start to turn brown and dry.

Cut stems about 30cm long and hang upside down in a warm, airy place, in a loosely tied paper bag, or with a tray or paper underneath to catch falling seeds. Seeds will either fall or can be shaken off.

Store in airtight containers in a dark, cool place. Use within 6 months.

6 quick-and-tasty ways to use fresh dill