The Wedge House: This musical couple traded city life for a triangle-shaped home in Central Otago 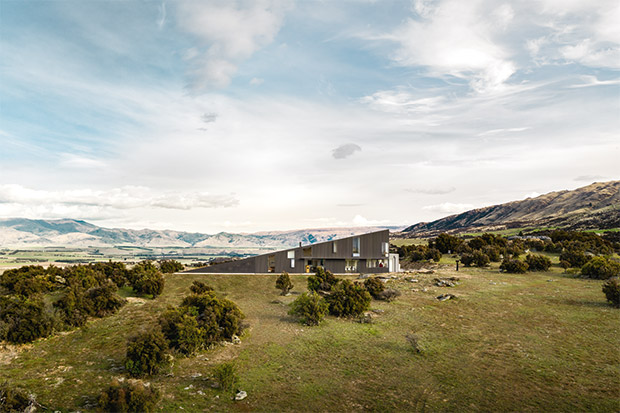 A conductor and a violinist find a soothing new tempo inside a Central Otago triangle.

This is the house that Google built: a magnificent giant doorstopper masquerading as a home. But it only found a place in Aotearoa thanks to two short words entered into the search engine: “wedge” and “house”.

The Wedge House was initially designed for the mom of an American architect and intended for a spot on the coast of Maine in the United States. But thanks to the vagaries of internet searching, it landed with a fortuitous cyber thump on the computer screen of a couple casting for house ideas on the other side of the globe.

The savvy Googlers? Marc Taddei and Justine Cormack, two classical musicians wanting to escape their squished-in urban Auckland lives and build something bold and architecturally gutsy on a mountain ridge in Queensbury, 20 minutes from Wānaka. Surely they didn’t just Google “house wot is shaped like a wedge”? “We kind of did,” says Justine. “We were looking for simple structural shapes.” Marc adds: “If we were going to build here, it had to be something of architectural interest. We wanted something minimalist with a post-modern feel. We looked at gables, the flat roof, the shed roof and then we looked at wedge houses. This was the first one that came up.”

Jeffrey Day, the architect responsible for this wedgy whimsy, had shelved his Maine-destined design when the cost estimates proved prohibitive for his downsizing mom. But the Wedge House sketches didn’t remain page-bound for long: they were uploaded to a website created to market modern house plans by prominent architects.

When Jeffrey received an email from New Zealand, he couldn’t have been more thrilled. Having spent much of his childhood in Christchurch, he was well-versed in the charms of the South Island. Jeffrey’s design loves its alternate Antipodean life. 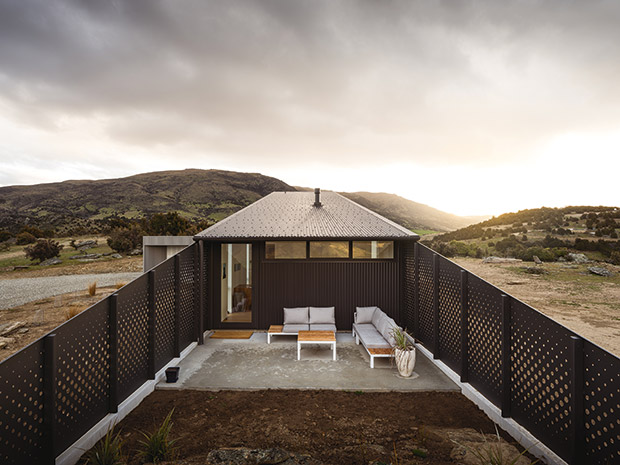 ‘As musicians, we’re very conscious that you can’t please everybody – you have to do what’s true to you. Some people will get it and others won’t. Most people want a house that looks like a house. But I don’t want to live the way everyone else does’

There was very little architectural modification needed to make the house Wānaka-fit – mostly a 180-degree pivot and a sideways flip to cater to the not-very-Maine-ish march of the southern hemisphere day.

They had to ensure the home’s proud peak didn’t war with the mountain skyline (or council), so Marc wandered about the section holding up a 7.5m pole to find the right spot.

Justine couldn’t get enough of this sort of thing – it allowed her to indulge her first and unrequited career love: architecture. She began her university studies with an intermediate year in architecture and music on the side. Music soon snaffled her, but she can still talk negative detailing and stud heights with the best of them. 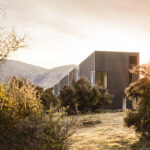 The couple has added New Zealand natives such as red tussocks and browntop grass to the existing rugged matagouri, kānuka and various coprosmas. The grasses will grow to good wind-dancing form. 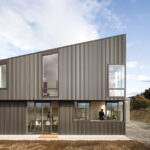 The Wedge House roof (made from 24-metre lengths of iron sheet) made it through the Lindis Pass on the back of a truck, which baulked at the site’s hill-scaling driveway. The materials traveled the last complicated stretch via human centipede (held aloft by seven obliging, fleet-footed men). 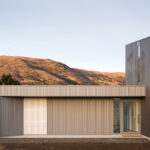 Architecture and land hold hands well here: “Our aim is for the place to look as natural as possible — like the house has just risen from the landscape,” says Justine.

The Wānaka Wedge was recently longlisted in the rural-house category for the international Dezeen Awards 2020 (a big back-pat in the world of architecture/design). But Justine knows it won’t be universally loved: “As musicians, we’re very conscious that you can’t please everybody – you have to do what’s true to you. Some people will get it and others won’t. Most people want a house that looks like a house. But I don’t want to live the way everyone else does.”

Marc adds: “People probably look at us quite strangely and think, ‘They’re musicians, what are they doing? Why do they live in a triangle?’ It’s radical-looking, but if you unpack it, it’s just a square and a rectangle. It looks minimal and complicated, but it’s not.”

It’s not the sort of house that plays well with others. Its design prefers its own exquisite company. “If we were in a more built-up area, it would stick out like a sore thumb in the worst possible way,” says Marc. But in these remote surrounds, it can emerge from the earth like a bossy slab of protuberant rock without frightening any nearby real estate. 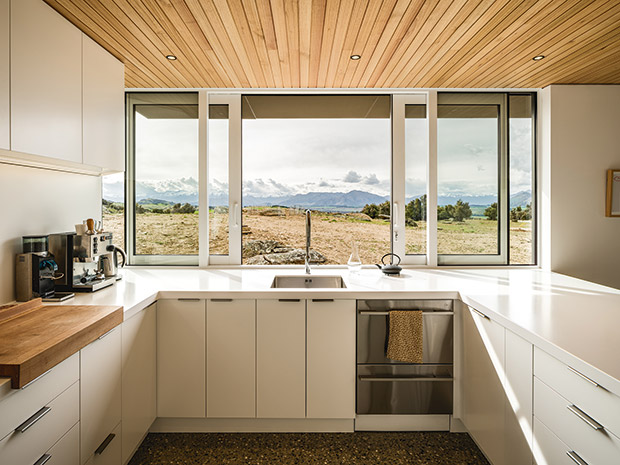 Privacy and expansive views rule at the Wedge. “When we walk through the house we’re capturing views on both sides all the time and constantly engaging with the landscape,” says Justine. “That’s why it’s such a genius design for this spot. If we did have neighbours, it wouldn’t work.”

There’s a quirky spatial relationship at play between land and wedge. The home’s svelte 5.4-metre width is offset by the capaciousness of the surrounding landscape, which regularly intrudes through its 20 windows. Taking more than a step through the house without being confronted by the Main Divide, the Pisa Range or the Grandview Range is nigh impossible. Landscape appreciation is a relentless pastime here.

More stories you might like:
Rock hunting and hiding: The rockin’ new hobby spreading kindness in New Zealand

While the exterior is all dark cladding and fierce angles, the interior has a true Scandi soul. Says Marc: “It’s like a Finnish dream. When Chris Moller from Grand Designs NZ first saw it, he said, ‘Oh this is Alvar Aalto [famous Finnish architect and designer]’. It does feel like we’re in a Swedish airport bar or something.”

Much of this is due to the home’s most compelling flourish: the exquisite tongue and groove eucalyptus wave that extends throughout. Its charms are registered loudest in the lounge’s undulating ceiling before disappearing off with great architectural pep to lavish more wooden flair on the upstairs floor. 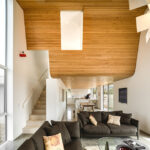 “Most of the materials in the house are bog-standard, but they’ve been elevated by great design,” says Justine. The Canterbury-sourced Eucalyptus nitens wood is the undisputed star. 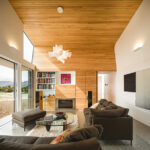 “The texture of the unsanded finish teamed with the square profile of the tongue and groove is exquisite.” 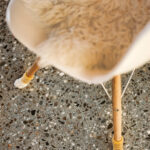 Another attention grabber: “We also really love our gorgeous concrete floor with its Clutha riverstones that come to life as the light moves across them.” 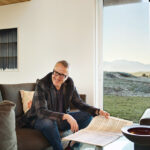 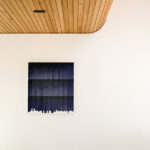 The duo are rightly besotted with the timber. “The wood is gorgeous,” says Justine. “It brings warmth and homeliness. When we were building it, there was always a question in my mind, ‘Is it going to feel stark?’ But it just doesn’t.”

The couple’s modern art collection is also far happier here. It’s been waiting for some decent space. “We started collecting in Auckland in our tiny little 1890s settler’s cottage in Ponsonby,” Marc says. “We’re pretty sure the artworks helped the sale of our cottage. The art was more an expression of our tastes than the little house was.” 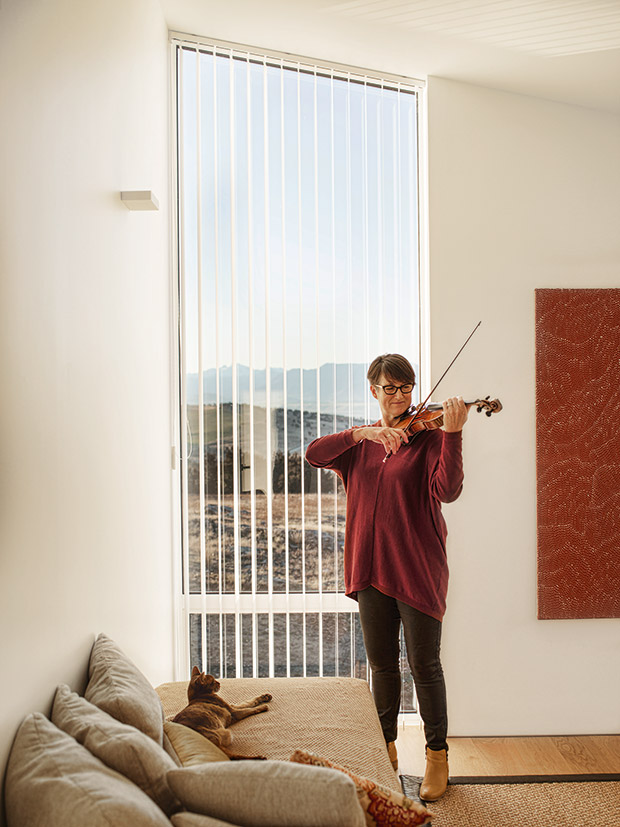 Swapping Ponsonby for Central Otago was prompted by a career gear change. After 15 rewarding years as founding member and violinist with the much-lauded NZTrio, Justine was keen to split her time between playing the violin and coaching other musicians in performance.

More stories you might like:
DIY: 8 free printable Christmas tags to add to your gifts this year

With Marc’s brilliant orchestral career requiring much travel (he’s the music director for Orchestra Wellington and the Vallejo Symphony Orchestra near San Francisco), proximity to an international airport was their only requirement.

The South Island’s dramatic landscapes tugged at them both. Justine says the mountains settle her, while Marc is partial to their grandeur: “It’s impossible not to be inspired by the landscape. The beauty gobsmacked me – I’ve always wanted to end up here.” 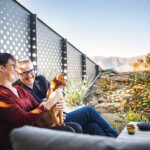 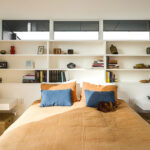 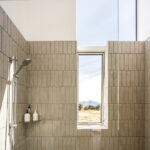 It was supposed to be a retirement plan. But itchy feet got them south sooner. Justine explains: “I realized I wanted a change and I thought, ‘We have this real goldmine in this tiny little house in Auckland, so let’s just do it now.’

Not having kids made the decision easier – if we had had kids, I’m sure we wouldn’t be here now.” Marc adds: “We’d still be in the NZSO.” (The New Zealand Symphony Orchestra is where the pair first clapped eyes on each other 30 years ago: Justine was sub-principal first violinist and Marc was a newly arrived principal trombonist from New York.) Justine agrees. “We probably wouldn’t have made the career moves that we have because it’s riskier stepping out of traditional things. So, we thought since we can do this, we should.”

They’ve shucked off their urban skins with ease, these two. “We instantly loved it here,” says Justine. “We appreciate where we live many times a day.” When asked how long it took to imbibe this new southern serenity, Justine estimates five minutes. Marc, ever the minimalist, quibbles with wanton excess: “Maybe three?”

Perhaps the most ardent admirer of architect Jeffrey Day’s wedge design is the home’s third occupant: a cinnamon-hued puss called Coco. She’s impressed by the decidedly cat-sympathetic placement of the home’s windows, most of which reach right down to the floor, affording her a full and regular assessment of her outdoor kingdom.

They also offer a glut of sun-sweet spots — one of which falls usefully on her owners’ bed. When she lies sun-lit on the cinnamon-coloured bedspread, she all but vanishes like some ingenious, brain-tricking trompe l’oeil motif. 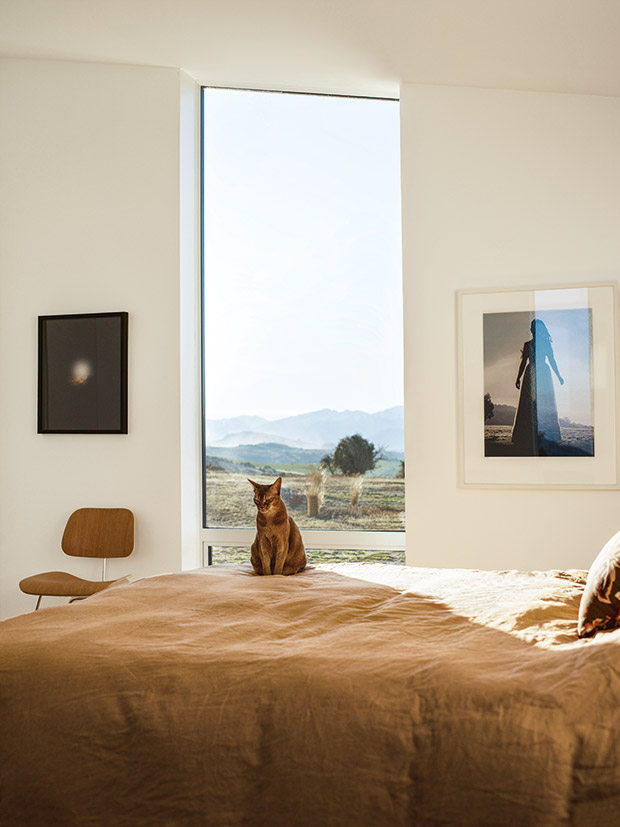 This elegant abyssinian creature should have had a cinnamon double in tow at the Wānaka Wedge. But her sister Cassie was found shot near a property the couple rented during the build. This much-missed moggy is saluted in the dining room, where the chair legs sport jaunty knitted cat paw socks. “In my mind, they were a tribute to Cassie,” says Justine, who found the floor-protecting chair accessories online.

Cassie’s absence means Coco is in sole charge of the rambunctious crowd of rabbits that seek to invade her turf at Queensbury. For a Ponsonby-bred cat, this has required some feline recalibration. “Coco discovered her inner lioness leanings coming south. She was very much a house cat in Ponsonby, quite weary of all the sounds and busy-ness there. She never really hunted in Auckland but when she discovered baby bunnies, she became a very effective hunter/devourer.”