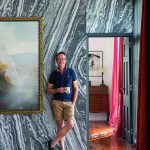 Architect Neil McLachlan chose the huge scale agate-inspired wallpaper to add intimacy to a large space as does the large oil painting by Ross Lewis. 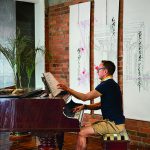 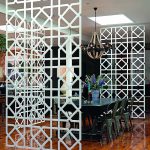 In making the huge space feel intimate, Neil designed the space dividers and had them laser cut from white Perspex to create distinct areas. 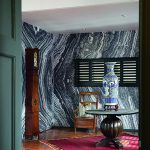 The entry area at the top of the stairs is home to Neil’s French grandfather clock, a table from Koko Classics (one of Neil’s favourite furniture stores) on an unusual square kilim rug and a huge Chinese vase. Black plantation shutters filter the light. 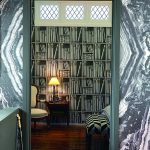 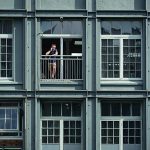 The exterior of the building shows the earthquake strengthening, completed by the previous owner.

Despite growing up on the cutting edge of the minimal Modernist movement, this interior and architectural designer’s heart is in the past

Neil McLachlan just can’t help himself. He gravitates towards old buildings, pulled by the patina of aged surfaces and the soulful stories of dark and sometimes derelict spaces. Several times recently, in Queenstown, Wellington and Auckland, he’s brought old buildings back to life just as it looked like it wasn’t possible. The north-facing windows of Neil’s Holland Street building overlook the back of Wellington’s St James Theatre. The bricks in the background are in fact wallpaper to match the real exposed bricks on the other side of the central fireplace. The big photographic work is by his great friend, Paul Macneill, (a New Zealander living in England for the past 30 years) and the silver pieces, on the French antique hotel sideboard, come from his mother’s ancestral home in Worcester.

In a forlorn 1860s cottage in Queenstown on the corner of Malaghan and Henry Streets, with rotting floors and fire damage, Neil saw a great holiday house for his friends and clients, the Fukutake family. “It’s easy,” he told them, “we’ll just raise the house and build another storey under it.” And they did. Where Neil saw a potential renaissance of the old building, another developer saw demolition and six new apartments – and the developer had resource consent to demolish the cottage. The re-emergence of this pretty cottage has since surprised locals who are scratching their heads wondering why they’d never noticed it before.

“Maybe,” they conjecture “some trees have been cut down?” 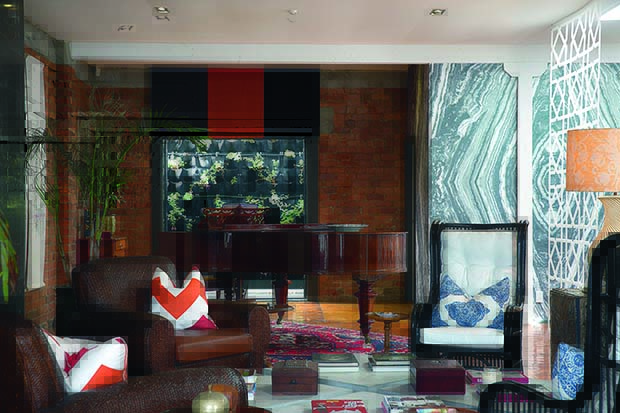 The vertical garden on the rear balcony is planted predominantly with fuchsias.

It was soon after the completion of the Henry Street cottage that Hulbert House, just up the hill on Ballarat Street, came on the market. It was being used as a backpackers’ verging on a doss house and badly needed restoring. Ted Sturt, retired from the British Army, had run it as a bed and breakfast with little done to it for 30 years. In its glory days of the 1880s, Hulbert House was home to Queenstown’s keeper of the gold, the modestly named Horatio Nelson Firth.

It tickles Neil’s wicked sense of humour that Firth eventually went to goal for embezzlement. He saw a Victorian mansion, with elegant bones, rather than a monstrous pile of seismic and building-code failures that had daunted others. He convinced the Fukutake family to buy it and transform it into a boutique hotel, which has just opened with six rooms.

Dancing to meet the complexities of Historic Places codes and the plethora of new regulations following the Christchurch earthquake is no waltz in the park even for an experienced practitioner such as Neil. More of a killer tango these days but well worth it, he says. The collection of classic blue and white porcelain is made up of both old and new vases and pots.

“I’m finding myself more and more passionate about old buildings. In New Zealand, we are getting worse at saving them – we just don’t value them. The new seismic regulations have lowered their value. People think they’re just too hard. I know that meeting all the standards is getting trickier but imagine if they took that attitude in Europe? There’d be no buildings left.”

This is at the heart of his love affair with beautiful old buildings. At 18, and while a student in Lawrence, Wisconsin, Neil was offered a position in a prestige Paris couture school. He jumped at the once-in-a-lifetime opportunity. (Neil’s Lawrence University degree required him to do a short fashion design course in Paris and, during the course, he’d come to the attention of the directrice who wanted him to stay and study fashion with her. A student dropped out at the last minute and he was offered the place.)

Within a couple of years his eponymous fashion label was stocked in several European capitals and in Barneys, New York. He was flying, well… until the 1987 crash, says Neil, not in the least put out by the end of his fashion design career. “Really, the fashion industry is crazy. It’s for bonkers people. I much prefer buildings.” In the first few years of his eventual nine years in Paris, Neil lived in a tiny (40-square-metres) three-storey apartment cleverly made up of attic space and maids’ rooms he persuaded his mother, Phyl, to buy. The bottom floor of Holland Street is used as a showroom by an importer of French antiques.

The apartment was at the corner of the Place Vendome in the 1st arrondissement and one of Paris’s most glorious and prestigious squares. It was a period of intense creativity and craziness with his fashion label, yet he missed his family. His mother had separated from his father, the distinguished Modernist architect Ron McLachlan, who had worked in London, Nigeria and New York. Neil returned to New Zealand with a head full of the buildings of Paris. No city official in Paris would ever succeed in having them earthquake strengthened.

Neil’s enrolled twice to study architecture and has twice been distracted by requests to do something so exciting he put the degree on hold. TVNZ’s Avalon studios near Wellington said, “come and design costumes for our television dramas”, after realizing they had a Paris-trained couturier in their country. So he did. Remember Gloss? Those shoulder pads could have been Neil’s. Then France wanted him back – to design costumes for the launch of the original EuroDisney Park in 1992. Neil connects to his Auckland office throughout the day by leaving Skype running. He says they “talk” back and forth without realizing they are not in the same room, let alone the same city.

“I was doing lots of fun, mad things and I lived in a massive apartment near the Gare du Nord – the complete opposite to my tiny Place Vendome apartment.” In addition to designing the Disney costumes, and thanks to friends from the United States buying a chateau in the Loire Valley, Neil began interior design on a serious scale. (Neil has visited every year since, until his loved friend and owner, Carole, died last year.)

Once more he was again pulled home by family ties – by Phyl, his brother Craig (one of the sake-makers featured in the March/April issue of NZ Life & Leisure) and Craig’s family, including his two nephews. Neil helped Debbie Cavit of Cavit & Co on her French buying trips and to launch her Queenstown branch.

He began importing antique furniture from France with his then business partner Dean Sharpe, whom he’d met while working at Cavit & Co. The pair had just decided to go out on their own when they got their first private client, well-known Auckland entrepreneur Roger Bhatnagar. Eventually the duo did so well out of their premises (selling them rather than the furniture within them) that Neil was able to return to architecture school in Auckland.

Yet again television came knocking with such a fun offer that Neil was too tempted. Changing Rooms, the popular programme in which talented designers made over one room in a private home, was to change the way New Zealanders thought of their interiors. They could be fun, and in Neil’s case, never stolid or formal. Even before Neil’s talents were on display on the telly, more and more customers wanted him to design their interiors. Soon, he was too busy again to complete his architecture degree. Back to the drawing board – quite literally – but to design for clients he loved and enjoyed and who came, and still do, from all over the world. This led to the beginnings of what has become quite a property-development career. Nowadays he juggles this with mostly large-scale interior-design commissions. His latest save is an inner-city Wellington commercial building, which he has recently established as his main residence (in addition to his apartment in the Auckland Viaduct Basin at Lighter Quay).

The building, which was built in the early 1900s, is in Holland Street, behind the St James Theatre, and was under contract to be knocked down and replaced with a hotel. As soon as Neil saw it, and got to the top floor, he knew he could make an open-plan loft apartment, his friend (and a business partner) who supplies French antiques could use the ground floor as a showroom and the lower ground floor (with high street-level windows) Neil reckons is simply perfect for a jazz club. With some fast footwork and a bit of help from Lady Luck (in timing) he snatched the building from the demolition contract.

Neil’s ability to breathe new life into old buildings has caught the imagination of Mr Fukutake Jnr, Hideaki. He and Neil are now business partners, with several projects on the drawing board, including a sympathetic conversion of one of Oriental Bay’s grand old sea-front ladies. “It’s funny, I guess, that my father was such an accomplished Modernist architect and yet I struggle with most contemporary architecture. I have a love affair with old buildings that have a story in their soul.”

Many of Neil’s houses could be termed rescue homes – saved from demolition. A St Mary’s Bay villa went from demolition order to the cover of NZ House & Garden and into the arms of a loving family – a great outcome for someone of Neil’s sensibilities. “I respond to the inimitable charm that you just can’t get in a new building and to the patina that comes with their age – that sense of warmth and soul. I think it’s such a shame that these old buildings are being devalued by the new regulations. When you are tackling an old building, you have to find engineers who are sensible and don’t get too over worked with the rules but find sensible ways to meet them. It’s always possible.”