There’s an immutable genetic condition gripping the Badcock family line: congenital artistry. It’s been spreading rampantly through the generations for a while and shows little sign of slowing. Two of the most art-struck in the ranks are John Badcock and his daughter Susan.

The seeds of John’s art bewitchment are easy to trace. His late father, Douglas Badcock, was Queenstown’s first full-time artist and a pretty big noise on the New Zealand art scene. He excelled in the traditional landscape genre, scooped the prestigious Kelliher Art Award in 1965, and produced three books of his own work.

John and his siblings (two of whom — David and Brian — are professional artists) first glimpsed art’s transportive powers when they were hustled into the family campervan and taken on trips by this landscape-hungry Douglas. 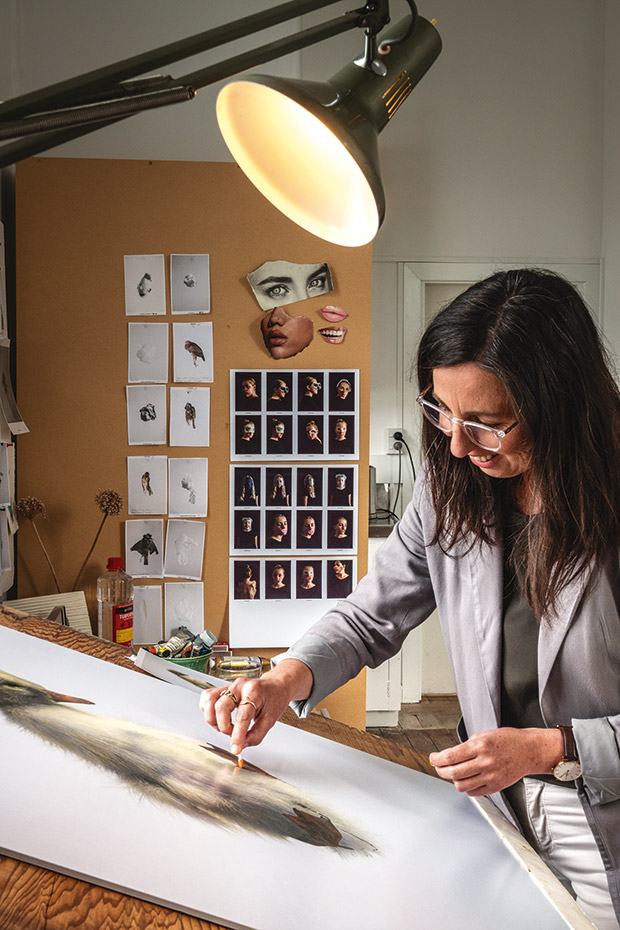 “Art was Dad’s life, so we had no choice really,” says John. “Wherever we went, his paintbrushes came too. We’d either be fishing for our dinner, cleaning Dad’s brushes or carting his gear to certain places. We were probably like packhorses. My father was a pretty tough man, but when you got him out in the field painting the landscape — that’s where his peace was.”

Curiously, Douglas didn’t encourage his children to chase that peace professionally. This may well have been due to his awareness of the ebb and flow of art’s financial rewards and the slings and arrows of its politics. 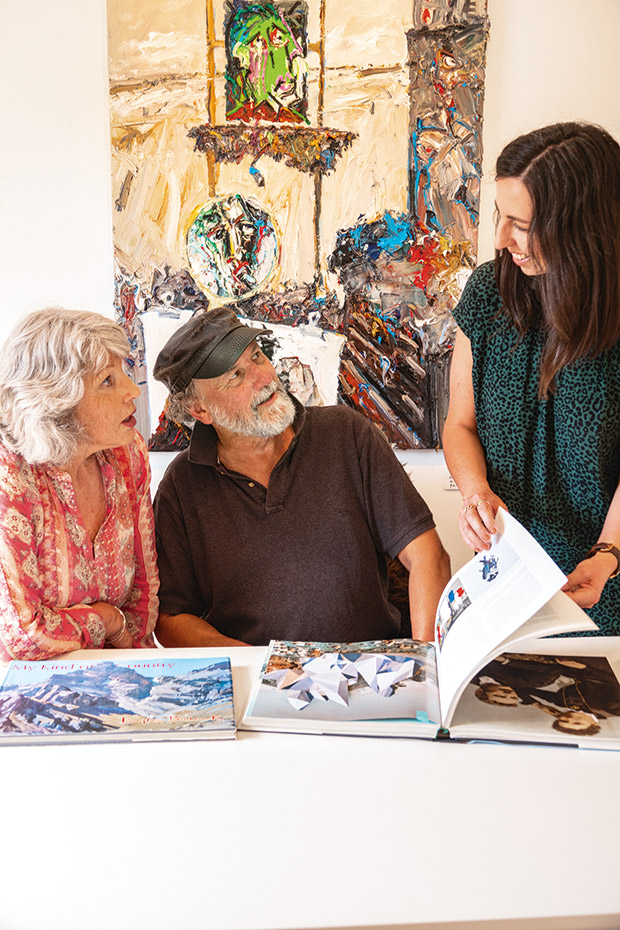 “My father told me I had to get a real job, which was strange, given his occupation. I wasn’t allowed to go to art school — he thought that was all a load of rot. I had to get an apprenticeship instead. Admittedly, I wasn’t top of art at school — I was top of subjects like woodwork, so it was probably the right choice in some ways. But I was too itchy-fingered to stay in that for long.”

After completing his cabinetmaking apprenticeship and starting a furniture business in Invercargill, John moved to Geraldine in 1978 with his wife Linda and two daughters Helen and Susan (their son Steven was yet to be born). They moved the cabinetmaking business there too, but art kept snapping at John’s heels — usually around mid-afternoon. 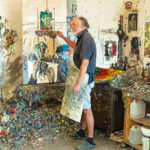 There’s no frazzling work commute here. “As soon as I put my feet out of bed, I’m at work,” says John. 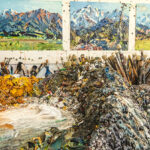 John fondly refers to the hardened paint drippage around his easel as “my stalagmites and stalactites. That paint pile is probably 18 years old now. I’m quite a messy painter.”

“My young apprentice Terry and I used to start early in the morning because he liked having the afternoons off, and I used to go out painting at about 3pm. I was planning on him taking over the business.”

That succession plan never came to pass, as Terry was killed in a road accident. It was this tragedy and some words of advice from a fellow painter that prompted John fully art-wards: “Austen Deans came in one day and said, ‘I think you should just go painting for a while and get out of the workshop.’ So, I put a sign on the door saying, ‘Gone Painting’. I never went back.” That was 35 years ago. 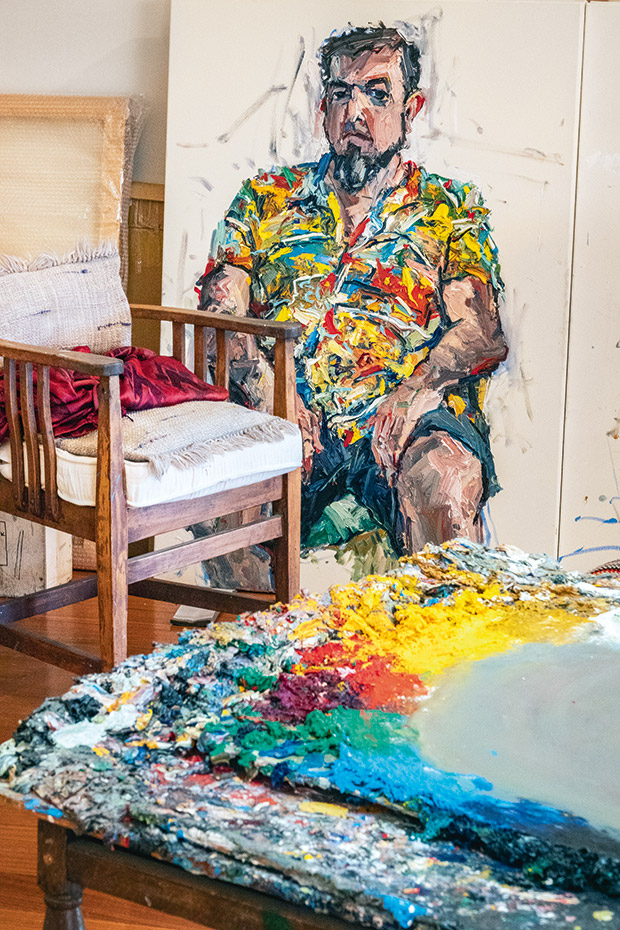 While John set off with his easel and brushes, Linda and her father, Noble, navigated the financial arm of the Badcock vocation, opening a gallery to sell his work. Though John is now represented in numerous public and private collections and has won many an art award, that two-word door sign may well have been the most important work he ever painted.

While plein air (outdoor) landscape painting exerts a huge and continual tug, portraiture is John’s favourite art corner. He thinks he probably gravitated towards this genre partly because of the filial space it granted him: it was, after all, a nicely non-Douglased path: “It’s a hard thing for anyone following through the parental tracks — you’re always trying to find a difference.” 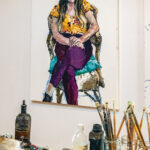 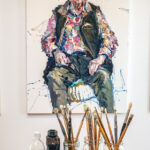 A distinctive surname in a small country can be both blessing and straitjacket. For John, it was the latter. “I still get it in the neck now. Because I’m a Badcock, people think I’m of the same genre as my father.

“In some ways, it’s not good to be in a family of artists because you’re pre-labeled. I didn’t understand that when I was younger, but my mother did — she told me to change my name. In those days, I thought it was ridiculous. But I probably should have. My mother was a very astute lady.”

One generation on, John’s daughter Susan’s surname is all blessing. Just as well, really, for it is emblazoned across the front of her Geraldine gallery. But, then, her art path was of the well-lit and parentally-championed variety. The portrait is of Linda’s father, Noble.

When Susan accompanied her father on art trips, she was no packhorse: “When I was 13 years old, I started joining Dad on painting trips. Sometimes we’d go away for a weekend with a mentor/friend of Dad’s called Roy, and the three of us would paint the whole time. I used to do a lot of life-drawing evening classes with Dad, too. We had a close bond, and I loved painting and being in the studio and helping him out.”

John’s art stewardship is now extending to another generation of Badcocks. “My daughter Iluka now goes out painting with him,” says Susan. “She does little watercolours. I sometimes look at them and think, ‘Ah, I know exactly how it feels to do that.’ I’m usually a bit jealous because I’m stuck at work, and they’re off painting. They have the most amazing bond — it’s exactly like what Dad and I had.”

Susan’s forte is contemporary hand-coloured photography — a medium that took her fancy when she experimented with old “view cameras” at art school in Dunedin. “I loved painting and photography and wanted to mix the old technique up with a contemporary feel. I like to trick the eye. By hand-colouring black and white photographs, you keep each work unique.”

It was only retrospectively that Susan discovered her grandfather Douglas had created a business from hand-colouring photographs before becoming a landscape painter. 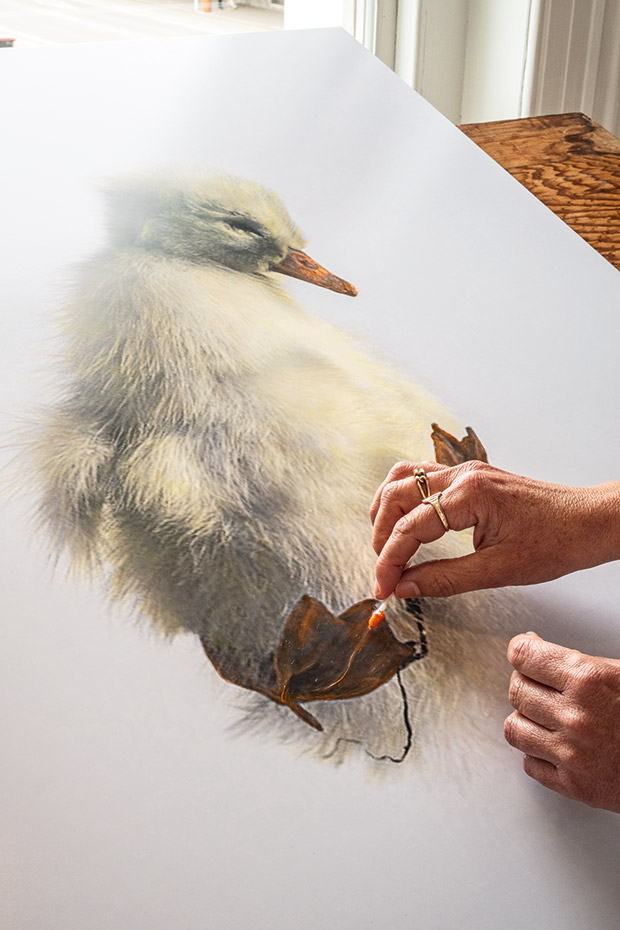 “Apparently Pop took photos of people down at the beach in Queenstown. He and another Douglas had a little business going where they would take photos, develop, print and hand-colour them, and people would buy them from the back of their van. There was no colour photography back then, so that’s why hand-colouring came into the mix. I sort of wonder whether there’s some hidden connection between him and me because that’s what I’ve ended up doing.”

There is little Douglas-related subject matter under Susan’s lens, though. A fondness for portraits and flowers aside, her art radar pings loudest when it hits upon something more offbeat. In a recent series, Susan spotlighted a couple of non-lofty subjects: discarded rubbish and roadkill. 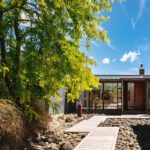 Designed by Christchurch architect Ian Cumberpatch, the Badcock home won the NZ Institute of Architects Resene Local Award (Residential) in 2002. When asked what caught the eye of the judges, John says: “Probably the spirit of the house — it has a great soul.” 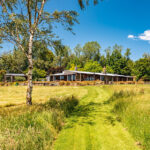 Located on nearly five hectares in Geraldine Downs, the Badcock home has an array of top-drawer views — the Southern Alps, Pacific Ocean and the Banks Peninsula. 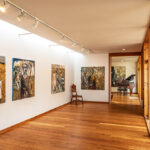 Ian found nifty ways of feeding as much natural light as possible through the house. In the gallery area, sunlight drops down via glass panels in the ceiling to dance across John’s paintings.

“I collect dead birds, freeze them and photograph them. I like glorifying things that are overlooked or discarded. I find things that are common or perhaps boring to the untrained eye — like crumpled paper chucked in the rubbish — and celebrate their forms and tones.”

Pop into the Susan Badcock Gallery in Geraldine and take a pick from the full intergenerational span of Badcock art. 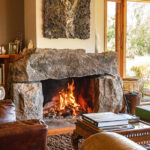 The Badcock home was the perfect resting place for the 27 or so different timbers languishing in John’s abandoned cabinetmaking workshop. 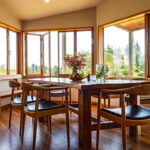 Once builders had secured the home’s foundations, frame and roof, he put his wood wizardry to great use and did the rest (with help from family and friends). Add his hand-crafted furniture and paintings to the mix, and the Badcocks’ is a house full of John. 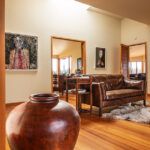 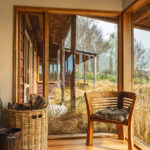 But surname aside, there’s little sign of artistic kinship. Says Susan: “Dad and I both have the Badcock name, but we have grown it in a unique way.”

Her photographic works are smooth, ethereal and refined, the perfect foil to the thick impasto strokes and expressive vigour of her father’s portraits and landscapes. While she applies colour to her photographs with cotton buds and restraint, John operates lavishly with paint-heaped brushes and a palette knife. Susan loves this contrast: “Dad’s work is bold and blows you out of the room. Mine is calm and draws you in.” susanbadcockstudio.co.nz

John: “Linda’s our rock. She did get herself into a pretty heavy family; it’s probably driven her mad over time. Lin’s the one that holds everything together — without her, the family probably would have fallen apart. Geraldine’s old post office building is home to the Susan Badcock Gallery. Here, Susan represents the work of three generations of Badcocks as well as several other contemporary artists. The building also houses her studio and a gallery shop called The Mailroom, where she sells New Zealand-made homewares.

She keeps everyone connected. She’s the manager. She just quietly works away in the background. I’ve been very lucky in my life to have full freedom to work and go and be what I want to be and travel where I want to. And Lin’s kept the house working. Families need someone around for that.”

Linda: “After meeting John in 1969, I have been a fan of his. I have never met anyone in my life with so much artistic flair and ability. The dedication and determination he lives by is outstanding. For an artist, the road is not an easy one — I see the daily commitment and struggles. They have to believe in themselves enough to carry on regardless of being constantly judged and criticised. It certainly isn’t as glamorous as it looks. People often ask me, ‘Oh, do you paint? Or wish you could paint?’ But why would I?”