Lessons from a stinky composting loo 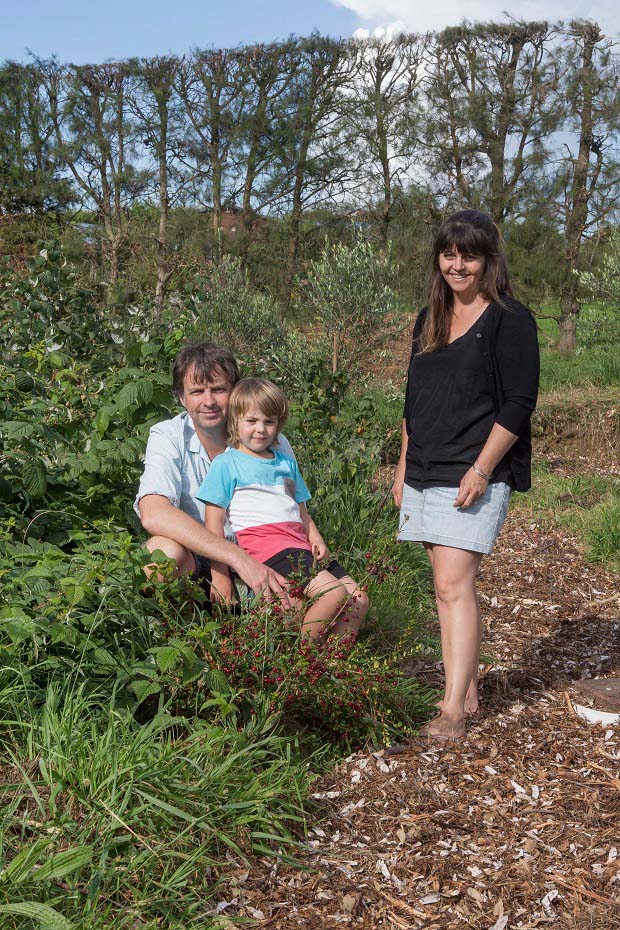 Matt, James and Melissa standing on the drainage field for the composting toilet.

When the owner-builders of one of New Zealand’s first hemp homes decided they also wanted to their toilet to have green credentials, they had to battle to get the loo of their dreams. 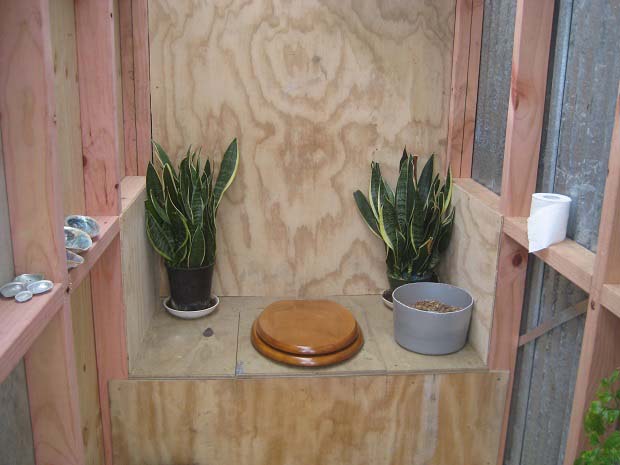 The sun was shining, the sky was blue, not a cloud in sight. It was the kind of amazing day where you could get busy doing all sorts of great outdoor leisure activities.
At our hemp home, just outside New Plymouth, cleaning out the composting toilet buckets was one of them.
There is no glamorous way of saying this: it was shitty. 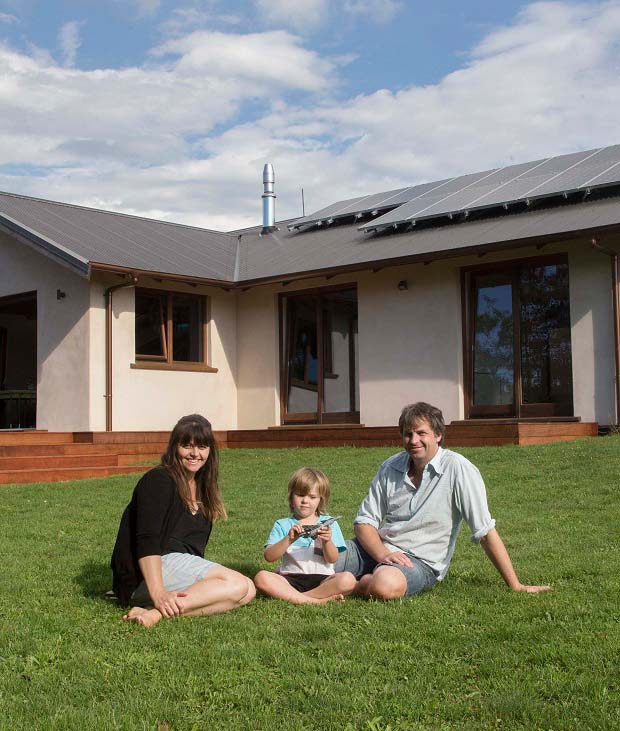 Matt, Melissa and their son James in front of their house built from hemp.

Our composting toilet journey has been a long one. We moved into a shed on our block in 2012, a temporary measure while we built our hemp house.

Matt built a basic composting toilet with a urine separator that catches all the wee at the front of the toilet. This means everyone has to sit down to pee so that the urine can be collected and drained into a container. Funnily enough, it’s actually the urine that creates the awful acrid smell that catches in your throat when you use this type of loo unless it’s separated from the solid waste.

The solid waste falls into a collection bucket behind the funnel. Once you’re done, the solid waste is sprinkled with sawdust to cover the deposit, adding carbon and again masking any smells. That said, on a hot, sunny day the flies will still smell it. 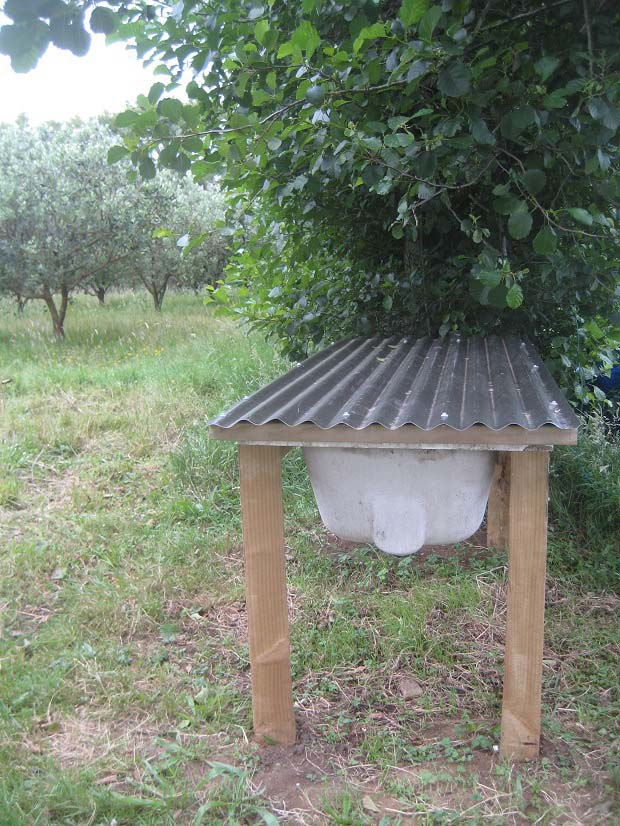 Once a bucket was full we would store it, with a lid on, in a cool, dark place. Once we had a few buckets, we’d empty them into an old bathtub that we had converted into a worm farm. The worms were great at processing our waste and then giving us loads of vermicast and verjuice to feed our shelter and fruit trees.

More stories you might like:
How to profit from specialty timber (from two foresters who've done it)

The urine needed to be rinsed out every few days – it really is smelly stuff – and you can dilute that and use it to feed around the dripline of fruit and shelter trees too.

This system worked well, but it did make me realise I wanted a flushing toilet in my new house, with no buckets that I had to clean out on a regular basis.

Matt did a lot of research and found a system that seemed to meet everything we were looking for: a composting system that required no electricity, no pump, and was a simple design with very few mechanical parts that could go wrong. It sounded perfect. 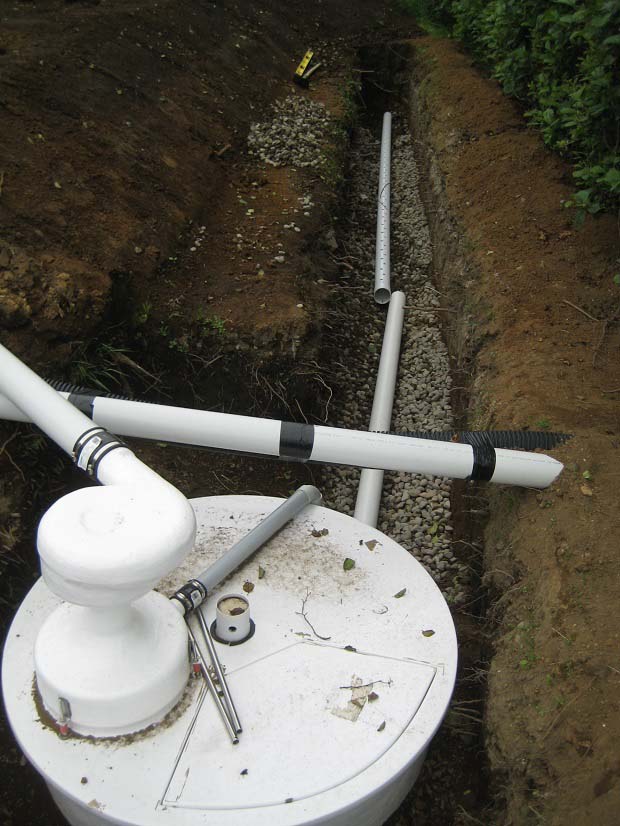 It wasn’t. Our Aquatron was not quite what we signed up for. The design seemed great but, once installed, things did not quite go to plan. We discovered the separator was actually a copy of a Swedish design and didn’t work as efficiently as it was supposed to. Liquids were meant to spin around in a separator, the centrifugal force sending the liquids flowing around the outside and out a pipe onto a black water drainage bed.

The solids would drop down the centre of the separator into a bin. The bin had four chambers and when one chamber filled you could rotate the bin and start filling the next one. After a few months you would rotate it again, and by the time you got back to the first bin, the waste in it would be broken down by the worms and ready for removal.

We tried. Actually, there isn’t much we in this – Matt tried to spin the bin after we had been using it for a few months. Have you ever heard the term opening a can of worms?

The centre column cracked and the bin wouldn’t budge. The inner bin wasn’t round so it was rubbing on the outside bin. It was also tilting under the weight of a full chamber and could not be shifted. 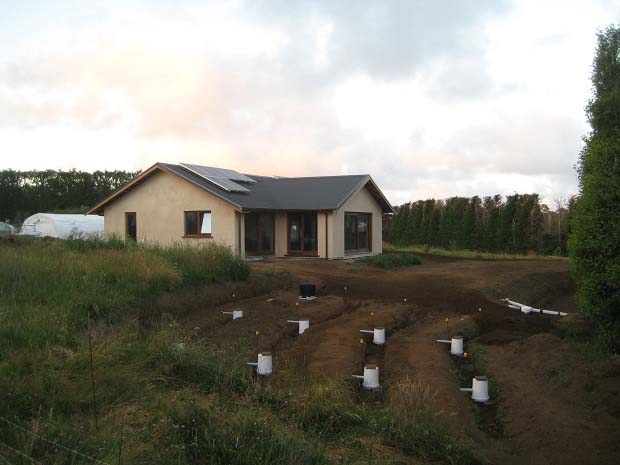 Emails started going back and forth to the supplier. The bin was returned for modifications and came back with the centre column fixed but still not round.

Matt spent the next 17 months scooping poo out of the bin and putting it into the worm farm from the bucket system from the shed. Thank goodness we had a way to process the waste or this would have been even more of a nightmare than it was.

During this time we discussed the issues with the original design company in Sweden and even considered importing a new model. Our talks with them highlighted a number of other deficiencies in the NZ design. The Swedish system has multiple drainage holes in the base of the inner bin to let the liquid drain out, and mats to assist with drainage and aeration of the waste.
We could also see a better centre support was needed to ensure the inner bin didn’t tilt under the weight of a full chamber. We continued to negotiate with the supplier, who ended up with a deteriorating medical condition. The business went into receivership and got to the point of preparing documentation for the small claims tribunal. In the end, we cut our losses.

That was when the team at Tuff Plastic Moulders Ltd came to the party and helped us out, selling us a system that worked. Matt installed the Aquatuti and it works. No more shifting buckets of crap on sunny days for me (or him). We live in our beautiful hemp house, with toilets that flush, with worms that eat our poo and a composting toilet system that does what it is supposed to.

More stories you might like:
How New Plymouth gardener Carl Freeman makes a living from his 1000sqm vegetable garden

May your journey to getting the composting toilet system that works for you be better than ours.

2 IMPORTANT THINGS TO DO BEFORE YOU GO FULL COMPOST

I fully recommend if you are thinking about composting toilets you should try going to the toilet in a bucket and dealing with your own waste for a few months before you commit to a life of composting toilets. You should also visit someone with the system you are thinking about installing and find out from them the things that work well and the things that don’t

The 7 common reasons why a septic tank fails