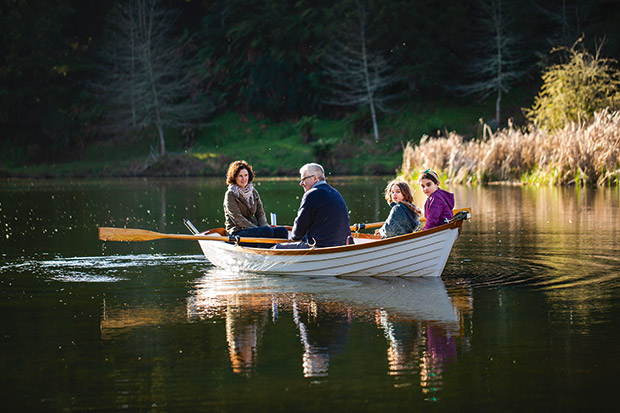 The Laver family sometimes takes a boat for a spin on a natural lake that is part of their friends’ Mat Sheriff and Kim Tatham’s nearby farm.

A boat builder with itchy feet, huge ideas and a young family finds his spiritual home in a tiny-but-mighty King Country town.

A sign in the tin shed where Max Laver crafts dinghies and dreams says it best: “Don’t grow up — it’s a trap.” This sentiment is befitting of a boat builder who turned his focus away from marine surveying so that he could sculpt a more inventive path.

He inhabits his environment of timber templates, careful stacks of planks, beams and offcuts, benchtop machinery, ducting and dust like a native. As if it were destined.

Yet, as a teenager, he claims he was a lost soul. When his restless spirit saw him on a roadtrip driving the backcountry and coastal byways of Nova Scotia looking for direction, it came in the form of maternal instinct. 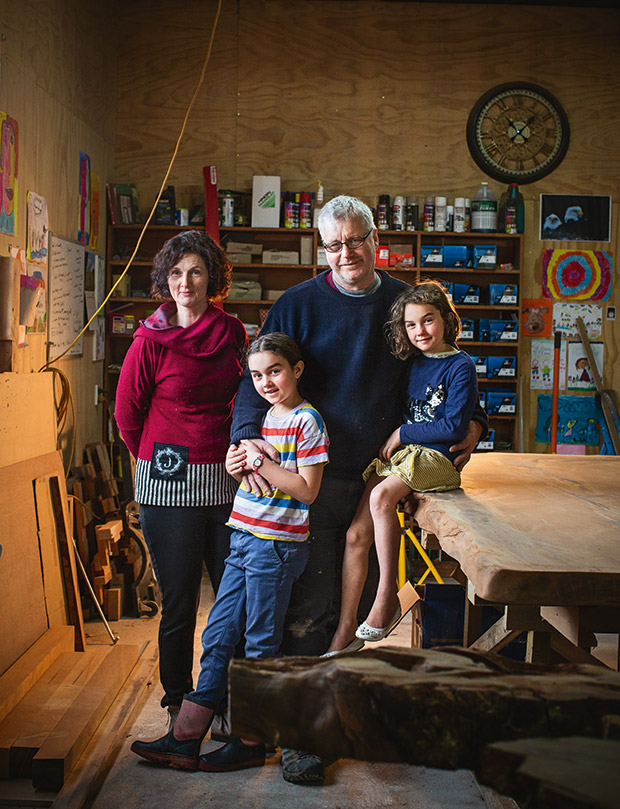 Max and Rachael Laver in the Piopio workshop, where Max crafts dinghies and other wooden wonders, with their two girls Eleanor (standing) and Luisa. The six-seater table under construction is made from 40,000-year-old swamp kauri that was stored in a barn for more than a decade. “I’m hoping this particular table will stay in New Zealand — it’s such a special piece of wood, and it’s wrong to export it all,” says Max.

Max’s mother Janet, a Londoner to the bone, was somewhat unconventional. A product of the 1960s, she hung out with fashion designers and actresses. Her second husband was a Canadian, who convinced her to relocate.

She took Max, his older sister and a sassy attitude along for the ride. Through decades of sparring and four more kids, the couple stayed together. “It was a tumultuous relationship, but he loved her to bits,” says Max. 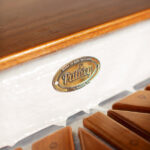 The dinghies, including The Putney, all feature bronze name plaques handmade in New Zealand. 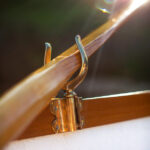 A highly polished bronze rowlock can fold down out of the way. 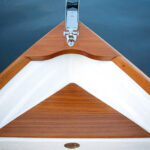 All the trims, including the curved bow plate, the gunnels and the seating, are in Burmese teak.

When Janet, who listened to the shipping news because she “loved the words”, spotted a boat-building course in a marine magazine, she knew it was right for a boy who dismantled household objects as a hobby.

“I’d take the cassette player apart and plug the motor straight into the wall and watch it whizz round. I once set the carpet on fire that way,” Max recalls. Janet called him immediately, interrupting his road trip. Max drove back to his future.

Strong women have proved the making of this entrepreneurial backyard engineer. He would never have ended up here in his spiritual home without them. Piopio in the King Country is an unlikely location for a boat builder’s workshop. It’s rural, rugged and miles from the sea. Max attaches the transom plate to a Teddington that was formed in the mould behind him.

For decades, Max had plied his trade in Canada, the United States, Australia and Britain when, one miserable day in Ireland, rain lashing down in sheets, he sat down for a pint in a pub, opened the newspaper and spotted an opportunity.

More stories you might like:
How Elaine Wright-Williams ditched the corporate ladder to become a full-time artist

“I faxed the guy in New Zealand a CV, had a chat to him on the phone the next morning and bought my plane ticket the day after.”

Within a week he arrived in Mount Maunganui. That’s how he landed the perfect job in the ideal country. Yet, on the brink of 40, he felt alone. Global travel and working in a male-centric industry wasn’t ideal for meeting a mate. Those were the early days of internet dating so, in typical pioneering fashion, he uploaded a profile. Not long after, he secured a “beer date”. 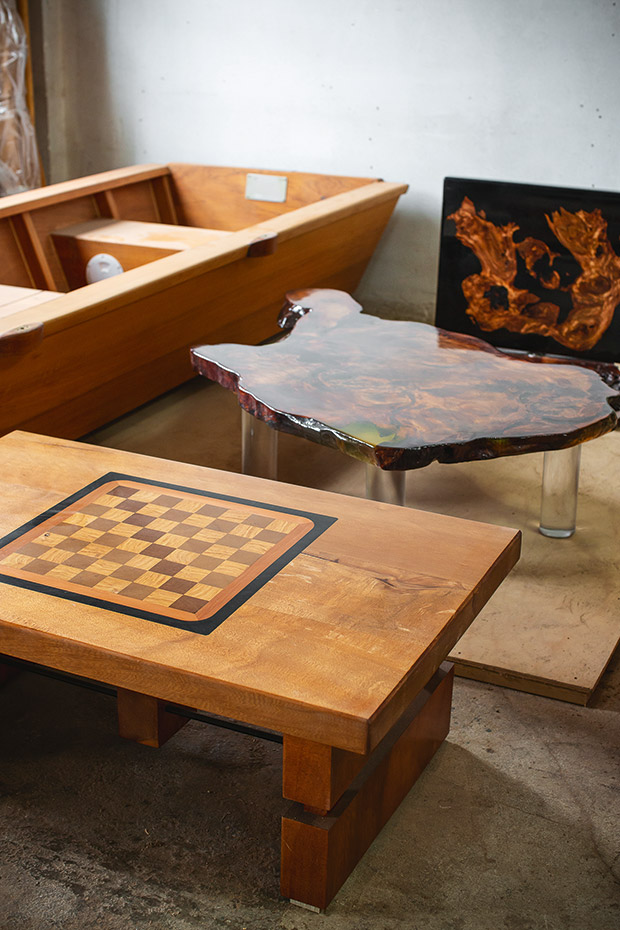 The joy of experimentation is showcased in this table with a chess-board top.

Max describes his wife Rachael as a straight-up, honest girl — and he’s not kidding. On their first meeting, with the directness that comes with being a farmer’s daughter, she confessed she thought him no oil painting. Max was not deterred.

For a second date, he invited her for a picnic on the boat he was restoring and living on in the marina. The couple clicked and married in 2009. Max had found his anchor.

It may sound glamorous and exciting to work on superyachts and boats that compete in the world’s most prestigious races — and it was. 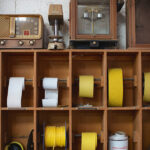 A collection of scales above the sandpaper station. 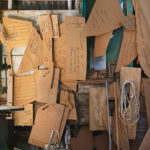 The templates for the rowboats are Max’s bible of shapes — “they represent this business; without them, it would take an incredibly long time to build a dinghy”. 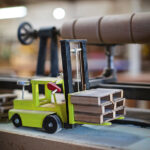 A miniature forklift built by Michael Piner who spent a good five years in his 80s working on the wooden toys — “he is a former merchant seaman, so he loved to come down here and we still keep in touch”.

“That type of client asks for the impossible and, if you throw enough money at it, with the right team you can achieve it,” says Max. But he longed to work for himself and so, with Rachael’s support, set up a marine-surveying business operating from a garage in Ōmokoroa.

One day, a guy popped in to ask where he could buy a little tender. It got Max thinking. “Inflatables are no fun to row — they collapse at the stroke of an oar. And yet wooden tenders are so much maintenance.”

A business idea was born. Long story short, Max invested in a $300 mould so he could fashion the body of the dinghies from low-maintenance fibreglass. Then he handcrafted the gunnels and seats in wood, giving it that traditional clinker style. Max at work on a project seemingly without end — a Canadian canoe for himself, which he is making from western red cedar.

Of course, when the mould arrived, it wasn’t up to scratch. Max re-formed its lines, shaping the “itchy, messy, sticky, stinky” material into something more aesthetically pleasing.

“Fibreglass isn’t pleasant to work with, but it’s so versatile,” he says. In no time at all, his trad-meets-rad dinghies gained a devoted following. Five models, named after lochs on the Thames, are now part of the Laver Marine range. 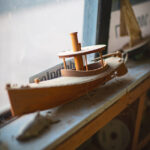 The riverboat was one of many knick-knacks to come Max’s way: “people donate things and drop them off at the workshop”. 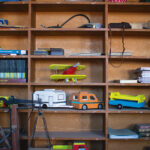 Caravans and bi-planes are also part of Michael’s toy repertoire. 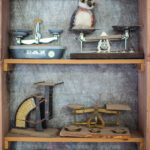 The felted owl was made by Rachael. “Owls are meant to scare seagulls away so when Rachael gave me this, it was her way of letting me know she loved me,” says Max.

Things were going great guns with Rachael working in tourism marketing and the couple enjoying family life with their two daughters — Eleanor (now 9) and Luisa (7) — when in 2013, Rachael’s mum developed terminal lung cancer.

“I had no intention of returning to live in my childhood town, but Max was the sensible one,” explains Rachael. “He said it was a no-brainer. We had to move to Piopio to help.”

This is how a boat builder came to operate from an inland workshop. When Rachael’s parents both passed away within the year, Rachael and Max bought the family home on a King Country hillside and now split their time between coast and country. Daffodils line the driveway that leads up past a berry orchard established by Rachael’s parents in the 1980s and on through paddocks where Bella the lamb is bleating to be fed, and young heifers watch with kindly eyes.

Although the family owns less than a hectare, the views here stretch forever. Early morning mists settle into the valleys and the Lavers’ two pet donkeys are a pair of comical characters who amble up to the gate to greet visitors.

After meeting a local helicopter pilot who fished ancient kauri from the fallen forests, Max expanded his enterprise to include handmade tables, which are exported to London mainly.

He works alongside Tony Williams (at 69, a “ramshackle superstar”) to bring these treasures to life, sometimes filling the fissures with emerald-green resin, but always letting the wood speak through his hands so that the table “essentially forms itself”. 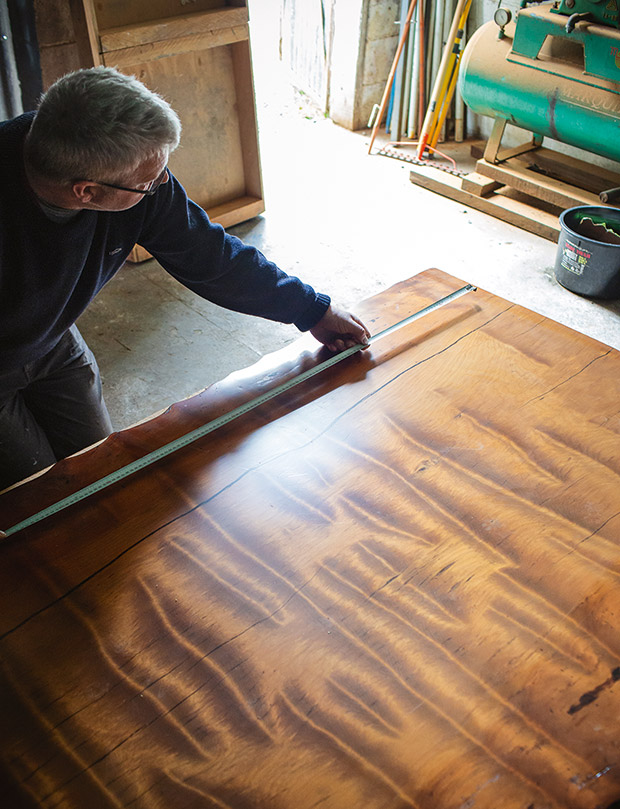 This beautiful piece of fiddleback kauri is destined to become a wine-tasting table for a client in London.

He might wax lyrical about the inherent beauty in a 40,000-year-old kauri slab that established techniques can coax out, but he also understands the value in material experimentation.

The two sides to his story are typified thus: by his replica build of a Model T Ford school-bus that once collected children on the longest daily route in New Zealand; and its polar opposite, a lightweight carbon-composite tipper-truck bin that can withstand the high temperatures required to transport bitumen for road surfaces.

Driven by his Promethean spirit, the business is ever-evolving; there are big ideas afoot in this town that just 400 people call home. In a purpose-built shed at the back of the workshop, there’s a red mould where, through a process of resin infusion, futuristic shipping containers are set to emerge. 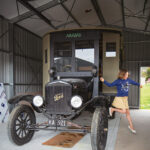 Max and friend Mark Carter built this exact copy of a 1921 Ford school-bus from scratch, a project that took a year to complete and is now housed in the Piopio museum. 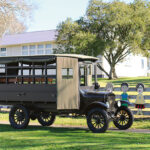 “We had a few pictures and two measurements: the length from the steering wheel to the back and the length of the bonnet to the window. From that, we could recreate it.” 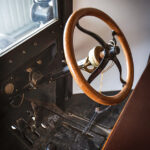 The area had the first school bus in New Zealand.

So the wooden console table for the entry hall that Rachael has requested and a canoe, made of western red cedar that has already been seven years in the making, will have to wait. Max hopes to take the container endeavour global. “I’m doing things I never thought I’d do.” Like a kid in a lolly shop, he still has a child-like enthusiasm for projects — and life.

Rachael (the down-to-earth party) is forced to occasionally rein in the romantic ideals of this mad scientist and maker in one. She keeps him on an even keel, holds the tiller steady. And Max, who admits to at times making it up as he goes along, appreciates the intervention. “She’s my happy handbrake,” he says. “Without her, I’d probably try to build a spaceship.”

Max Laver has successfully developed a one-piece mould for making shipping containers by process of resin (or vacuum) infusion. A bag is placed over the mould to create a vacuum. The resin is then “shot” into it, delivered via a system of conduits that run like veins across its surface. It’s an expensive process, and much can go wrong. 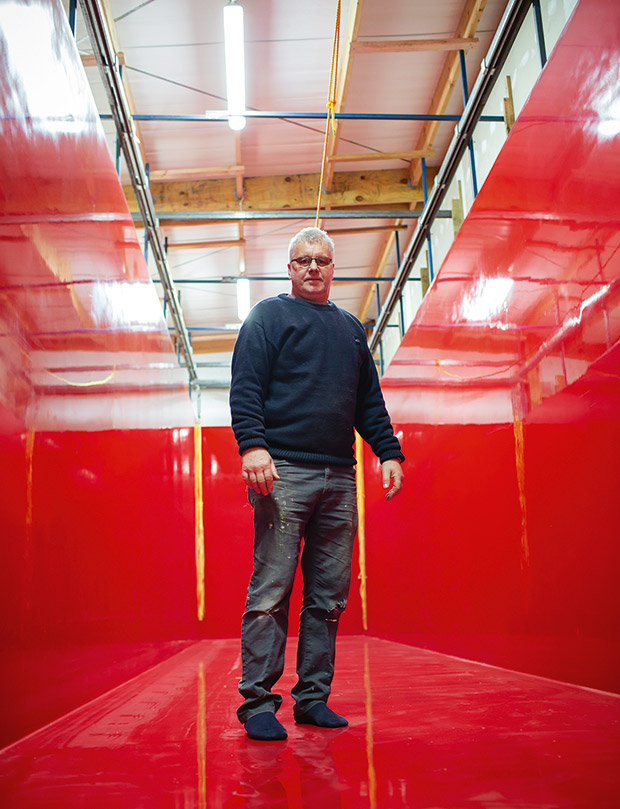 But it’s worth the calculated risk as it could be transformational to the shipping industry. Standard steel containers are heavy, so making them from a carbon composite instead (which is even lighter than aluminium) will save on fuel and operational costs since they are also resistant to corrosion.

Max has developed a prototype and hopes to get R&D funding so he can take the idea further. “I want to prove that makers can thrive in rural towns. With today’s technology, we can manufacture anywhere, creating work in areas that need employment.” If Max has his way, the start-up enterprise will ultimately send products made in Piopio to the ports of the world.