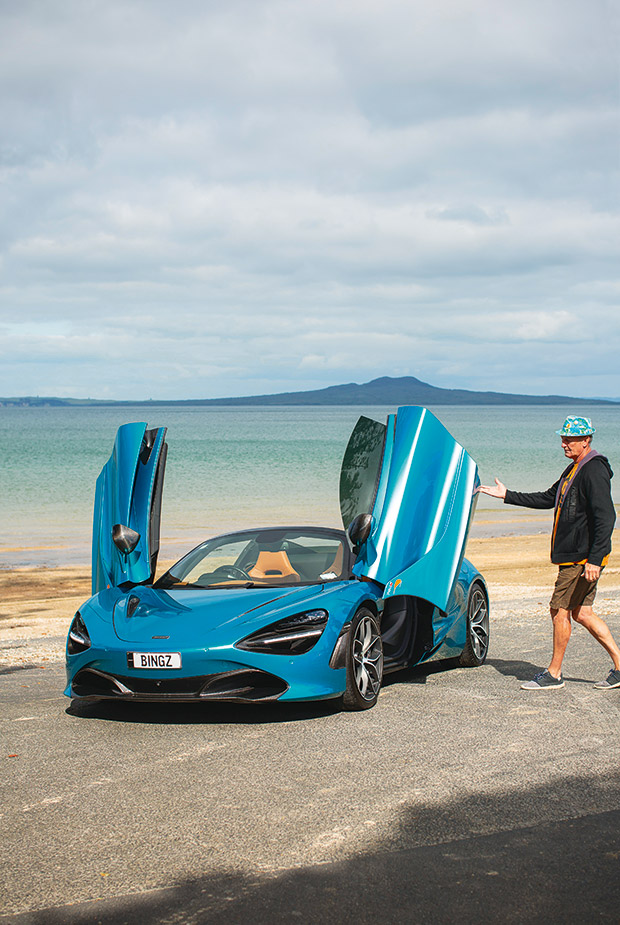 He was nicknamed after the famous crooner, but Bing Crosby of Browns Bay’s smooth style is reflected in his choice of motor vehicles.

Bing Crosby speeds his 2019 McLaren 720S Spider around the circuit at the Bruce McLaren Motorsport Park in Taupō, leaving an almost tangible slipstream of Belize Blue. It is several thousand kilometres and a few decades from the Dorset village in which Bing grew up, where he hung out his bedroom window when he was supposed to be sleeping and ogled the traffic.

He learned to identify local vehicles by their tail- and headlights and developed a passion for cars. Fast cars. Cars that can hurtle around at more than 200 kilometres an hour; magic cars with tyres that sing as sweetly as the music Bing mixes in one of his parallel lives as a DJ; and good-looking cars that are built to be driven.

Oddly enough, it wasn’t the highways Bing took to after leaving school, but the high seas, sailing the world in the merchant navy. When he finally came ashore, he had no idea what he wanted to do. He pondered his options as he and an old school chum walked their dogs. 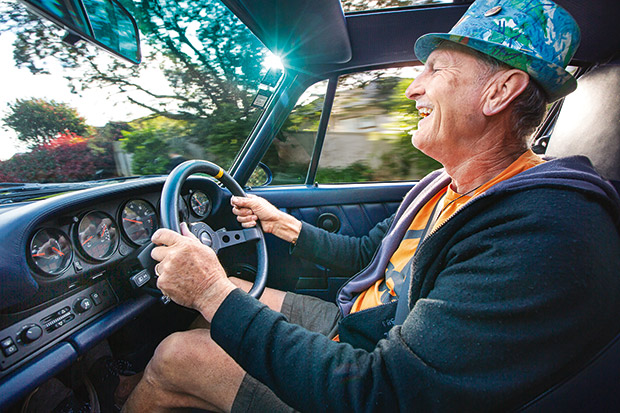 “Come and work for me,” said his mate, who left school with few qualifications to work for a car transportation company, eventually earned a business degree and became CEO of the firm, then the second-biggest such operation in Europe.

“No way,” spluttered Bing. “I’m over working for anyone but myself.” “Well,” countered chummy, “contract yourself to me.” Clever chummy.

So Bing became the director of his own vehicle rectification company. This includes the process of badging up vehicles for particular markets. Vauxhalls, for instance, are Vauxhalls in Britain and Opels in Europe. Emergency vehicles needed their police, fire or medical insignia. Not all cars are created equal, and some needed radios or alarms.

Bing’s team would install more than 400 alarm systems every day over seven sites throughout England. Some of the vehicles were made in Portugal, Spain and France and parked — 7000 deep — in Britain, waiting to be rectified. 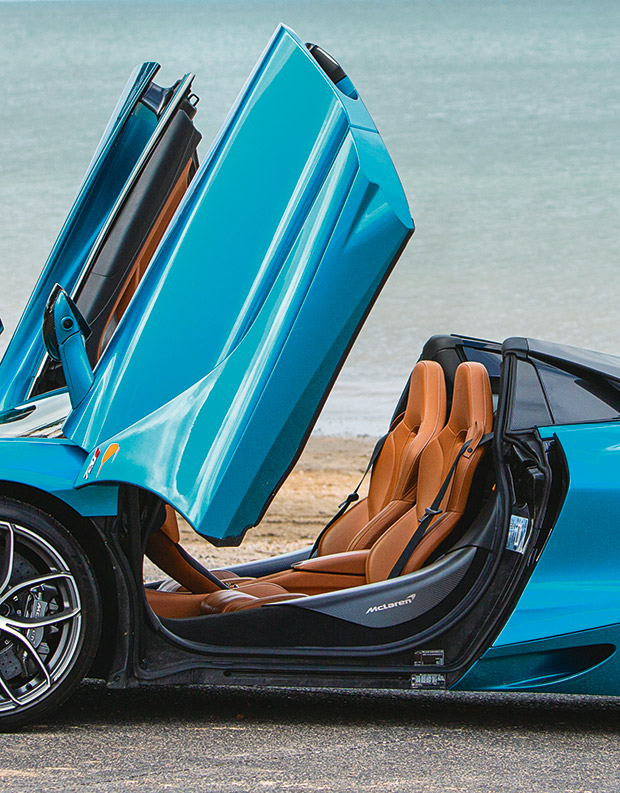 Bing drove and drove and drove between locations; there was barely a highway, byway, or English country lane he didn’t traverse. What a job. He loved it. He got to play with cars without getting his hands dirty because here’s a funny thing. Bing is passionate about cars. He loves them from the tread that hits the tarmac to their hard-top or rag-top. He knows how they hum, so he can quickly tell if anything is wrong with them.

But he hates working on engines. He hates the muck and the grease, and most of all, he hates scraping his knuckles. He needs his hands in good shape for driving, not mauled and scarred as is the badge of a mechanic. He can do body and panel work if he’s forced to, but there is a limit. His passion for cars is fed from being behind the wheel, not under the hood as it is for others. 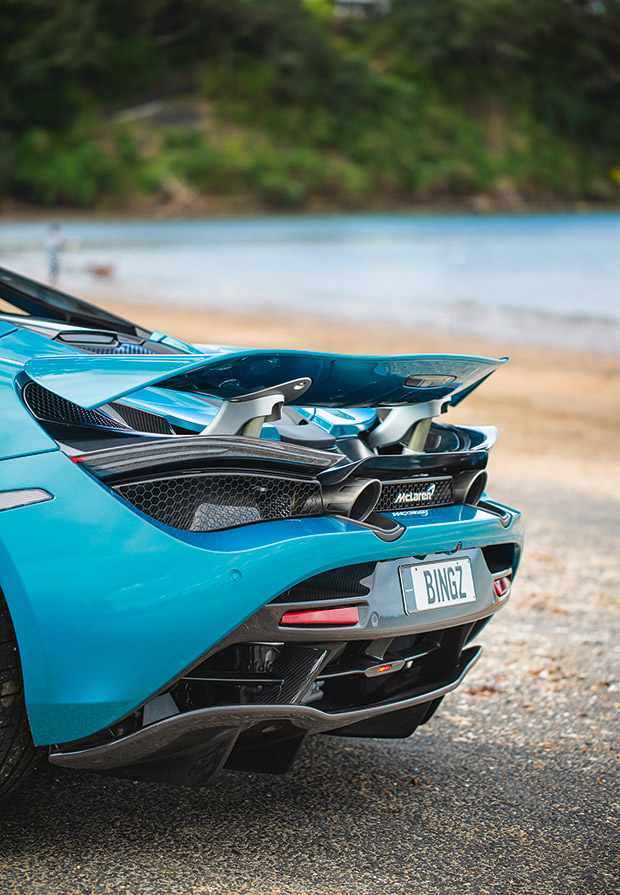 Then it was time for a change. Bing emigrated to New Zealand with an entrepreneur’s visa and opened the popular and quirky Supper Club, a subterranean bar off Auckland’s Karangahape Road that had once been a public convenience. Immigrating under this category does not include business involvement of a passive nature. Passive! As if. He bought his first New Zealand vehicle, a Subaru WRX STI RA rally version. There is nothing passive or sedate about that vehicle.

There were other cars and then an orange McLaren MP4-12C Spider. This satisfied his urge for a supercar, and he enjoyed the ride immensely. 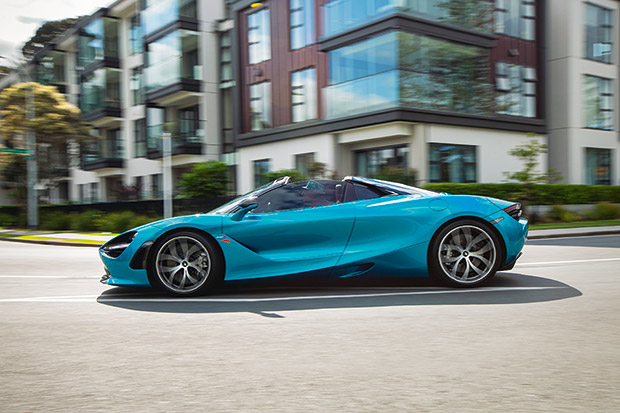 “Then, one day when I picked it up from its annual service in Auckland, I told the sales manager I heard there was a 720S Spider four-litre twin-turbo in Australia for sale. I made a deal to trade the 12C against it, but then along came Covid-19 and the first lockdown. However, eight long weeks later, I had it. It had been McLaren’s demo car in Australia and had 6000 kilometres on the clock. It now has 12,000. It likes any road, but my favourite drive in it to date is the Gentle Annie, that 152-kilometre stretch from Taihape to Fernhill in Hawke’s Bay. And, of course, the Taupō track. It goes from zero to 100 kilometres in 2.8 seconds and stops in the same time. So you can see the braking and acceleration are excellent.

“I had a bit of a hairy moment on the Taupō track when, traveling at 273 kilometres an hour, my mate came up beside me in his McLaren Senna at 287 kilometres an hour and overtook me just before the bend. Thrilling and nerve-wracking at the same time.” 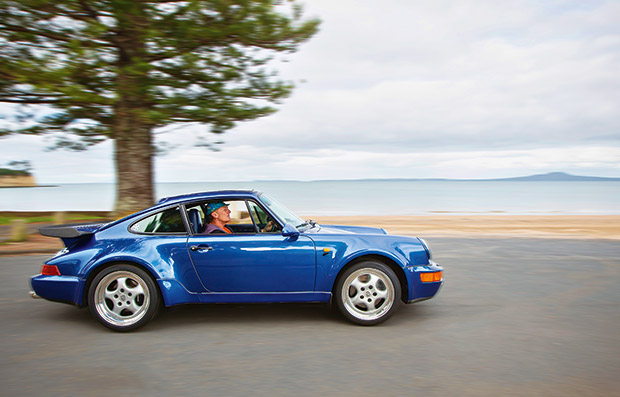 “The Porsche is a beautiful car; I love it and will never give it up. My favourite place to drive it is everywhere.”

Called the Bad Boy when launched, the model is notoriously hard to drive, not least because of its rear engine and rear-drive, which causes the back to slip, says Bing. “Only 3360 of that model were manufactured, and people loved them but were also afraid of them because they were one of the fastest cars on the road.”

The car is cobalt blue, specially mixed for the car’s original owner, the 29th Sultan of Brunei, who is famous for his collection of luxury vehicles. His Majesty was keen to have a dedicated Formula 1 track in the Sultanate and invited Michael Schumacher and Bernie Eccleston to see if it was feasible. He offered them a car to drive while they were there, and Michael chose the cobalt-blue Porsche.

Unique cars like this sometimes have mysterious histories, but suffice to say, the vehicle somehow found its way across the vast Indian Ocean and smaller Tasman Sea to that collectable car dealership, Dutton Garage in Christchurch. Always with one admiring eye on that high-performance stock, Bing soon became the Porsche’s enraptured owner.

The Bad Boy has also had a hairy moment on a bend. “Two-three years ago, I was driving to Whanganui when I rounded a bend just coming into Ōhakune at dusk. There was a cow in the middle of the road. How I missed her, I’ll never know. I swung out around her on the bend, and if there had been something coming in the other direction, it would have been a disaster. 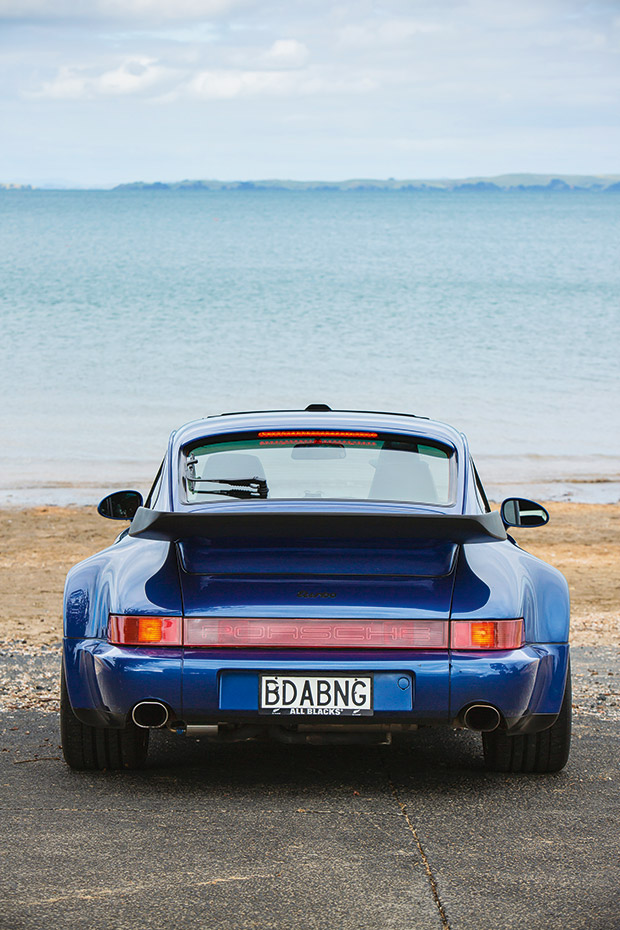 “It is a beautiful car; I love it and will never give it up. My favourite place to drive it is everywhere. When I die, it will be shipped to England to the Haynes International Motor Museum in Yeovil in Somerset. The car will be jointly owned by my niece and nephews but kept at the museum. They will be tasked to drive it once a year, at least to keep it ticking over. My eldest nephew, Craig [38] — a sergeant in the Marines — is car-mad, as is a younger nephew Connor [24]. If one day they decide to sell it, it will be up to them.”

As well as joint ownership of the Porsche, all the kids will get a car as Bing also has several others tucked away in his Browns Bay home, including a newly and completely restored 1976 VW Kombi van, a 2006 RS4 Audi, a 1970 P1800 Volvo Bing is rebuilding, and a Toyota Coaster campervan appropriately plated MREASY.

He drives all his vehicles every week, both for the love of the vehicle and the love of driving. As the adage goes, for Bing, it really is about focusing on the journey and not the destination.