Three generations of the Lewis family pictured at a very busy time of year among the strawberries on their Horowhenua asparagus and strawberry farm. From left Catherine, Addison (5), Archer (4) with his “Papa”, Geoff, and Cam, with Charlie (nearly 2).

This farming family grows asparagus and strawberries — the food manifestations of spring and summer. But Horowhenua’s Lewis Farms is a year-round operation.

In Lewis Farms’ 100 hectares of asparagus, the team will collectively walk about 600 kilometres a day, scanning for the snake-like spears that have appeared out of the soil since the last pass.

Cam Lewis doesn’t pick much himself these days, but he’s been out in his family’s Horowhenua asparagus fields since before he could walk. “I’m not sure if the memory is real or from a photo, but I know I was out here in a pram as my parents picked asparagus.”

The asparagus Lewis Farms produces keeps Cam and his wife, Catherine, running almost as fast as the highly nutritious vegetable grows, spearheading their Tendertips business through its frantic 100-day harvest season. Cam is the fourth Lewis to farm on Dunoon, at Poroutawhao, just past the Waitārere Beach turn-off, and south of the Manawatū River. His great grandfather, Vincent, bought it in 1934 to milk cows. Vincent’s son, Campbell, farmed sheep and dairy with his dad, then handed over to his son, Geoff, in 1986. Geoff’s own son, Cam, and Catherine now farm in partnership with Geoff and Liz (Cam’s mum). As Cam and Catherine have three children – Addison (5), Archer (4), Charlie (nearly 2) – there’s a fair chance of a fifth farming generation, too.

Things have changed since Vincent and Campbell’s day. While there are still about 900 dairy cows, along with beef cattle, grazing mostly on leased land, Geoff started farming asparagus a breath shy of four decades ago.

He had an inkling it would grow well in Horowhenua’s temperate climate and sandy coastal soil. He was right. At the peak of the season, up to 30,000 bunches of gorgeous green asparagus are trucked out of Lewis Farms’ packhouse each day. It’s a far cry from when Geoff started.

“Back then, New Zealand was producing at least twice the asparagus it does now, but most ended up in a can. A lot of people ate only the mushy, yucky asparagus, like what you’d get wrapped up in white bread in an asparagus roll served at a funeral. Disgusting stuff,” says Cam.

Not that he’s denigrating asparagus rolls – they just have to be made the right way (see recipe below). 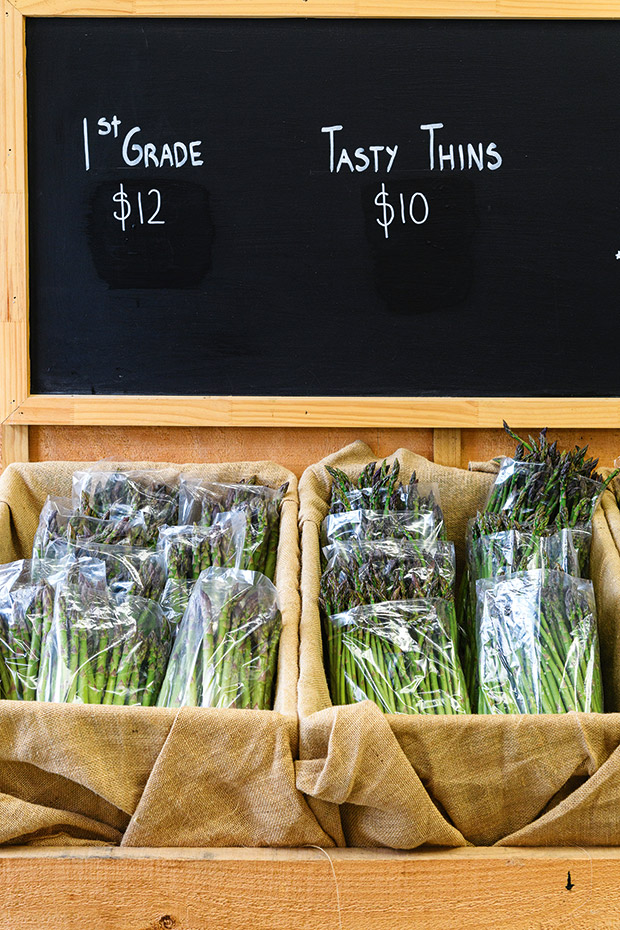 These days, nearly all the harvest is eaten fresh, either locally or exported. But the export market has also declined. “This is the first year we won’t have exported anything to Japan,” says Cam. “Back in the 1990s and early 2000s, we may have exported about half our harvest in a good year.

There are cycles in any business, but New Zealand growers can’t compete with South America and México, in particular, especially in the past three years. They have such cheap labour, and our minimum wage has gone up significantly.”

That’s tough enough for the industry, but when New Zealanders can’t consume the entire asparagus crop, Cam says the price can drop below the cost of production. “It hasn’t happened yet because it’s been so cold that spring ran three weeks late. That’s helped a bit this year, but next year, who knows?” 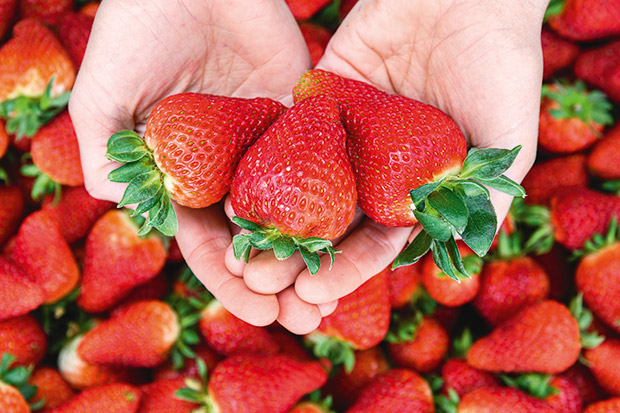 Perhaps a few canneries might need to reopen? Cam and Catherine laugh dryly. It’s something they, like many growers, do often when discussing the vagaries of making a living in horticulture. But they both love it, even if, for Catherine, it’s a long way from her previous career as a policy analyst.

“I was born and bred on a dry-stock farm in Palmerston North, so I have farming roots, and I like the farm life but coming here was a shock.

“It was hard the first year to find my place in the business, but now I do the compliance and the marketing, and I run the packhouse shop where we sell fresh produce and real fruit ice cream.”

The pair moved back to the farm in 2011, following a year of traveling after Cam left his job in rural banking. They first took over the “total slog” of dairying before moving into asparagus in 2015, alongside Geoff. Cam and Catherine in the packhouse, which employs more than 70 people during the harvest, spanning all age groups and many ethnic and cultural backgrounds. Cam says the packhouse workers have been like a “second family” to him since he and his two brothers started coming here as children.

“My father is 68, and he’s here full time. He still loves it and wouldn’t have it any other way,” says Cam. “He’s the go-to man for anything that goes wrong or breaks in the packhouse. If we miss the truck for a supermarket order, Dad loads up his ute and delivers it.”

In 2018, Cam and Catherine added another crop – hydroponically grown strawberries, starting with one hectare. As the strawberries are under cover, they’re protected from weather and timed for harvest in autumn, avoiding a collision with the asparagus and extending employment opportunities for key staff to nearly a full year.

That’s important to the Lewis family. They love being able to offer many jobs to locals, and to long-time employees under the Recognised Seasonal Employer scheme. (Geoff played a role in getting the scheme going.)

At the peak of the season, Lewis Farms employs more than 150 people, split between full-time office and admin staff, packhouse workers and pickers. When he was a child, Cam says the packhouse was like a big family, and he loved hanging out with all these “extra parents”. “I imagine our kids will be sucked in there quite young, too, if for nothing else but the social aspect of it.” The demographics of that “family” has changed over the years. When Cam was young, he says the packhouse was staffed predominantly by farming women earning extra dollars before Christmas. Today’s workforce is still predominantly Kiwi, and many are older people who have given up the rat race to pick their way around the country.

“We have 10 powered campervan sites behind our packhouse, and they roll in each year to pack asparagus. Then they’ll leave us and go to Central Otago for the summer fruit, then up to Hawke’s Bay for the apples, and they might pick kiwifruit or grapes. But we also have people who come just to us to do the asparagus, which, along with their pension, gives them enough to live on,” says Cam.

The international pickers are mostly from Samoa. And while the 40 or so men, aged between 20 and 50, provide the Lewises with much-needed labour, it’s clear the family is proud of how the work helps the men. 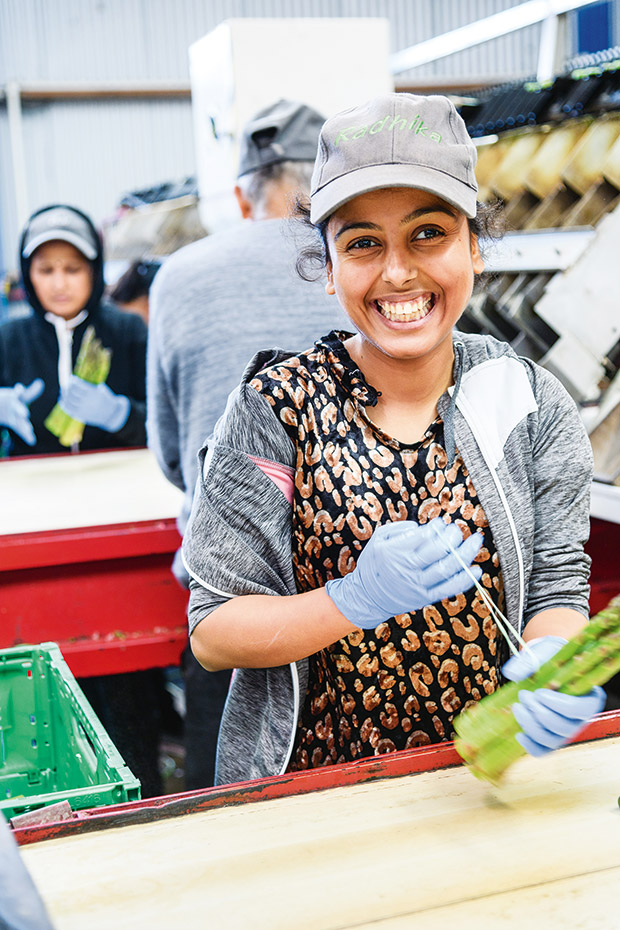 Geoff visits the villages in Samoa the pickers come from each year and, in the winter of 2019 (winter being their only holiday opportunity), Cam and Catherine went with their two eldest children. “It was amazing. Our children got to see how our pickers’ children live for seven months their dads are in New Zealand. Our kids saw how important the work we provide is to those families,” says Cam.

“Some of the guys have been coming out for 10 years, and that’s allowed them to build separate kitchens and toilets, and educate their kids.
We get a real kick out of seeing what these guys do with their money.”

Sadly, one of the workers’ villages was destroyed by a tsunami in September 2009. “I can vividly remember that day. We had to go out in the field and tell them there had been a tsunami. Luckily no one was killed. My father made a promise to help rebuild their homes and the whole community raised money. It was really special,” says Cam.

The Lewises are looking to automation to alleviate asparagus-picking labour woes, but they’re determined to expand other areas of the business to compensate. 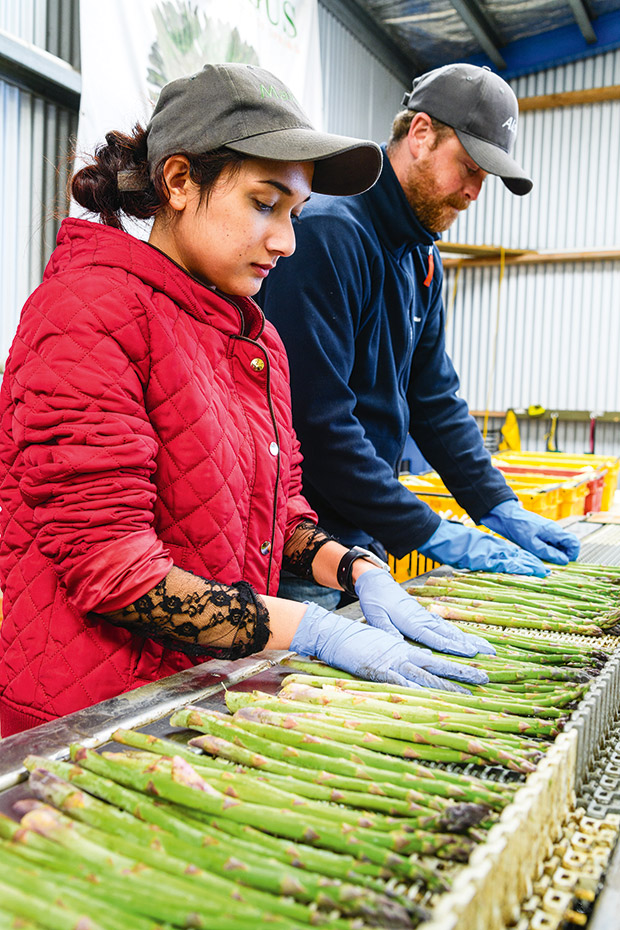 “We’ve set a goal not to reduce the number of people we employ,” says Catherine. “We want to expand our strawberries, in particular, to continue to provide those jobs. As the unemployment rate goes down, it gets harder to get good people. So you find ways to keep them.”

The farm’s various aspects keep the whole Lewis family well employed, too, although perhaps a little too busy through the asparagus season. “But that’s what you get with this crop. Luckily, we’re addicted to work,” says Catherine, again with that dry laugh.

“We’re all in this together,” says Cam. “We’re blessed this business is big enough that there’s space for everyone.”

To chop or snap? Chop. Snapping wastes far too much good asparagus. Most asparagus is already cut at the right place, so remove only 1cm or 2cm. Thinner spears may not need any removed at all.

Boil or steam? Steam, as they’re easier to monitor. And stop cooking just at the right moment, while they’re still a bit firm. Thinner spears are delicious raw. 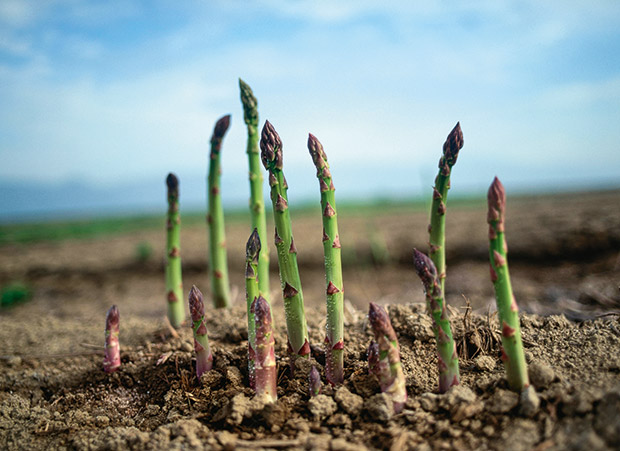 Thin or thick? Definitely thick. “People are afraid of thick ones because they think they’re woody. But the thick ones have the best taste because they’re from younger plants and have a higher sugar content,” says Catherine.

“Our favourites are the ‘juicy jumbos’, which are lovely and thick. We peel off the lower third of skin, cover them with olive oil, and then stick them under the grill or on the barbecue for eight minutes or so, until a knife will just go into them. They’re so sweet — like they have sugar on them.”

HOW DOES ASPARAGUS GROW?

Asparagus is a perennial crop, grown from crowns that extend roots a good 1.5 metres down into the soil. After planting, the plant’s spears won’t be harvested for the first two to three years to allow it to build up strength. An asparagus crown usually survives for about 17 to 20 years before it stops producing, at which point the field is ploughed up.

When the soil warms with the arrival of spring, the crown sends out several shoots that poke up out of the ground. It’s these that are picked, cleaned and bunched as asparagus spears. Towards the end of the season, a decision is made to stop picking, and the spears are allowed to grow into beautiful big ferns that photosynthesize in the sun, sending energy down into the crown to be stored for next year’s harvest.

“Asparagus doesn’t need a lot of fertilizing or macro-nutrients relative to other green vegetables. The biggest thing an asparagus bud needs — aside from the right weather, not too cold or hot — is patience because you don’t make your money back for six or seven years. So it takes a lot of time and takes up a lot of space, which is good for us as producers because it’s a hard vegetable to grow at home,” says Catherine. Steam asparagus spears until cooked (they should still be a little firm), then plunge into iced water to stop cooking.

Spread slices of fresh white bread with soft cream cheese, and lay on a spear or two. Finish with a grating of lemon zest. Roll, and enjoy.