George, Sarah, Faith and Haxby in their “happy place”, a family trip with Haxby’s beloved Kombi.

Several Ashburton cows were all that stood between professor Haxby Abbott and his dream of a (pre-1967) Kombi.

In a spot of inspired rural financing, a savvy young farmer’s son turned several unwitting mid-Canterbury bovines into the van of his dreams: a 1963 Volkswagen Kombi. That was three decades ago. If he reversed the deal in today’s Kombi-coveting climate, he’d be a veritable beef baron.

Haxby Abbott, research professor in surgical sciences at the University of Otago, has long had a thing for the Kombi. As a student in the 1980s, he placed imploring notes under the windscreen wipers of Kombis he spied around campus, but his brazen auto-advances were shunned.

Then, one mid-semester break, when he was driving back to his parents’ Ashburton farm, he spotted one with a “come hither” sign in its window languishing on the roadside just south of Ōamaru. He pulled over, jotted down the phone number and continued on his way. 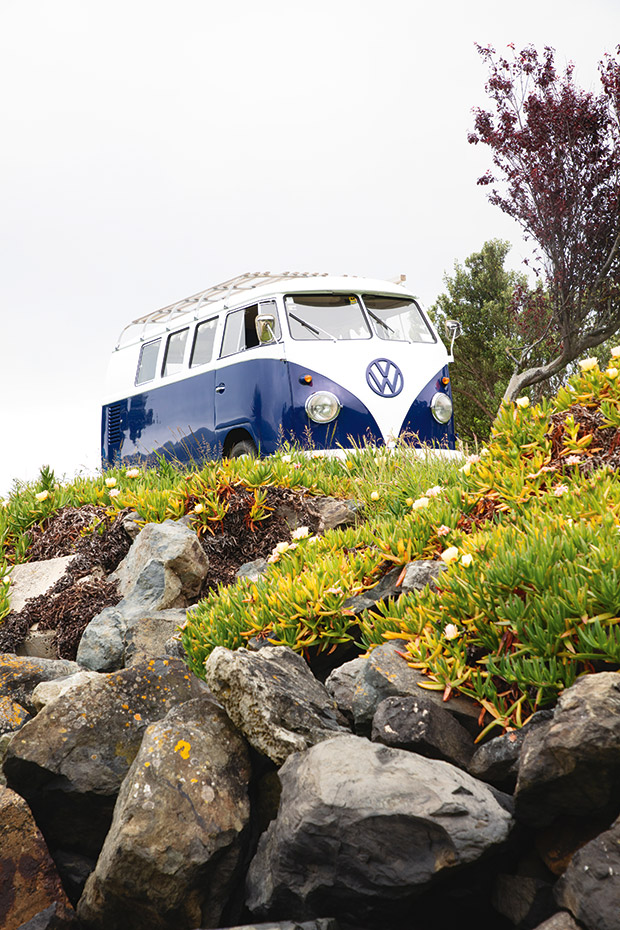 “I thought about that Kombi all the way home, wondering how I could swing it. I ended up paying about $3250 for it, which was about $2250 more than I had in the world, but I did have some steers that were maturing into reasonably heavy beasts on the farm. So I sent them off to the works and bought the Kombi. I had to call up the bank manager in charge of student accounts in Dunedin and say, ‘Can you spot me some cash until I kill my cows?’”

Just like the surfers and hippies of the late 1960s, Haxby was deeply smitten with the van’s simplicity and air of freedom. So, was the incipient professor Abbott all about peace and love?

“I’ve been accused of being part of the hippie movement in my student youth,” he says. “But I wasn’t a self-identifying paid-up member. Mind you, I did have long hair and wore coarse linen. And Greenpeace singlets. And I had a man bag — one of those woven wool ones. OK, so quite hippie-ish.” 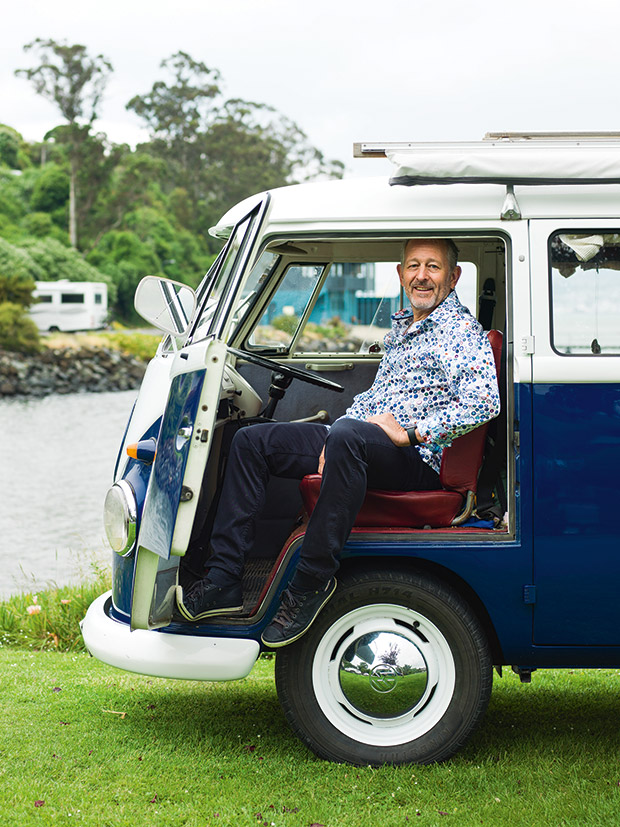 The van and the man were too powerful a combination for Sarah Parker (Haxby’s wife) to ignore: “I was already pretty taken with his long ringlet-curly hair and his hippie-ish sense of style,” she says. “And then I discovered he owned a Kombi. I thought, ‘How cool can he be?’”

Cooler than his van’s handling, she discovered, for the Volkswagen Kombi is an unusual hybrid (Kombi is short for Kombinationskraftwagen, German for “combination motor vehicle”). It was first conceived as a rough sketch drawn in 1947 by Ben Pon, a Dutch importer of VW Beetles. He thought that pairing the Beetle chassis with a cargo-carrying vehicle would result in something automotively audacious.

In 1950, his drawing (which one commentator likened to an overgrown loaf of bread) became the Kombi or Volkswagen Type 2 (the VW Beetle being Type 1). With its rear engine and snub-nosed front, it was one of the first vans to place the driver above the front wheels — a source of both motoring delight and dismay. 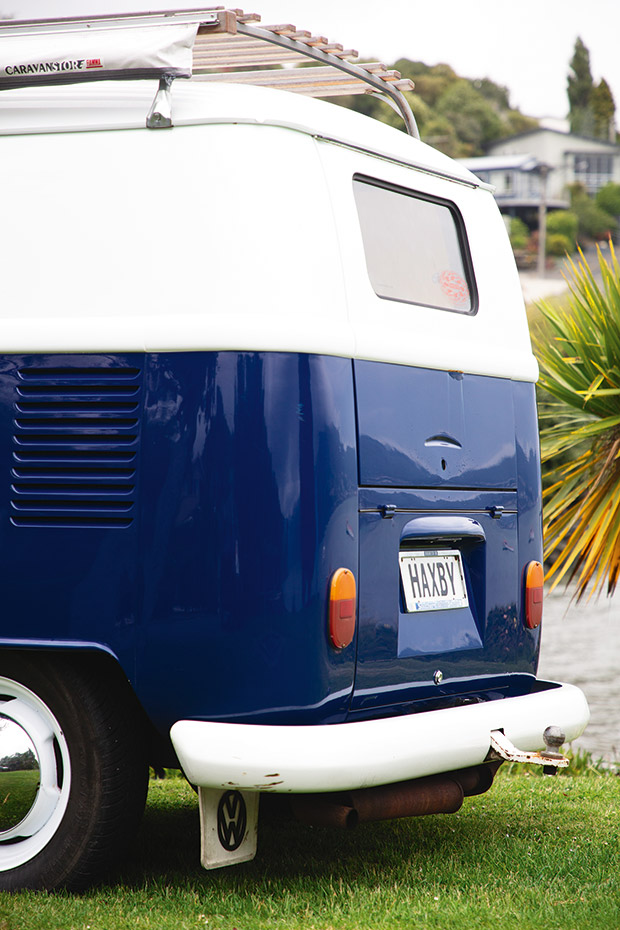 “For a vehicle with no power steering, it’s surprisingly easy to drive because all the engine weight is at the back. But if you’re going downhill and around a corner, you have to know the dynamics, or you’ll take out letterboxes and parking meters.”

More stories you might like:
The power of toy-lending: Playing it forward at the Taranaki Toy Library

“It’s nothing to relish. It’s a little bit sphincter-tightening if you arrive at the corner and realize it’s sharper than you expected. You have to be very delicate and precise and measured in the amount of lateral G-forces you impart on it.” This long-bottom vs tight-corner situation saw Sarah swear off manoeuvring the Kombi around Dunedin’s inner city. “Driving it was stressful — I was OK on the open road but, in town, I certainly lacked depth perception. I remember a close call with a stop sign in Roslyn.”

Once an electrician’s workhorse, this van has accompanied Haxby from singledom to marriage and fatherhood. During those three decades, it’s won thorough family-wide approval: “Sarah loves a Kombi trip — it’s her happy place. And our kids, George and Faith, think it’s great because they’re up quite high. Sarah’s mum even built a shed at her house with an extra bay on it for my Kombi.”

Step inside Haxby’s Dunedin home, and you immediately know his automotive stripes: “Almost every year, I get a birthday or Christmas present that’s Kombi-themed. This house is groaning with Kombi paraphernalia — everything from egg cups to tea towels and piggy banks.” 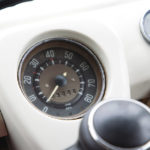 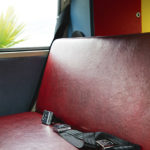 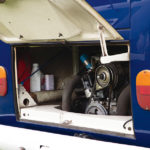 He even had his vehicle’s likeness committed to fibreglass: when asked what design he wanted on his surfboard, Haxby sent the maker a photo of his Kombi. There’s no hurrying to be had in this van, though the upgraded motor and gearbox have given it some vim.

“I’m usually overcome with a sense of calm and relaxed abandon when I slip into the Kombi. They have great bouncy/floaty smoothness. And I just love the design of them — the shape, the curves, the distinctiveness. They also have a sort of smiley-face look, with their split-window eyes, nose, and mouth.” 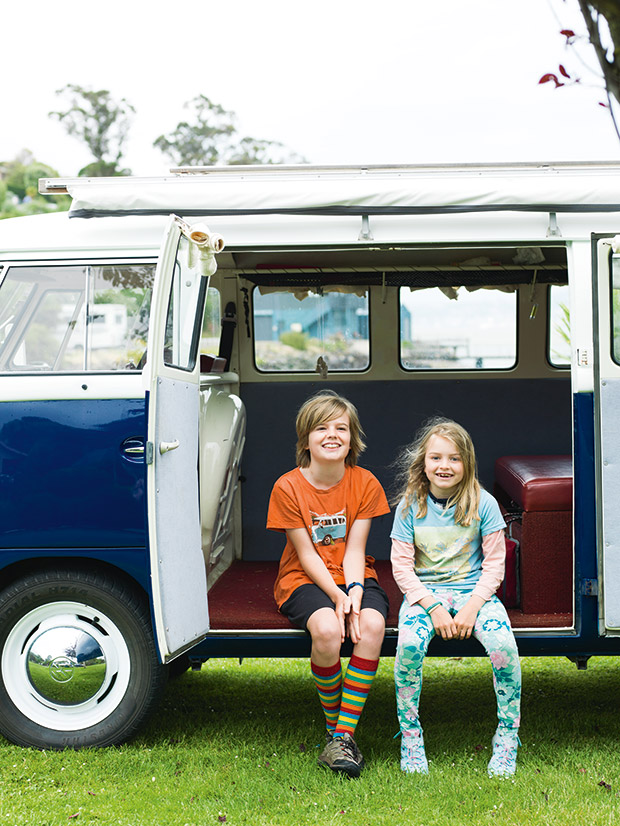 That split-front windshield (only found on versions produced before 1967) is a point of pride. Haxby says, “Sarah always notes that I only wave to fellow Kombi drivers with split windows.” The van gets plenty of toots and waves. “We once pulled into the petrol station in Omarama, and the guy said that one of the mechanics hadn’t stopped talking about the Kombi since we were last there. And at Lake Taupō last summer, some teenage girls wanted to take selfies with it. That was pretty funny — them asking Haxby. He’s still cool, you know.”