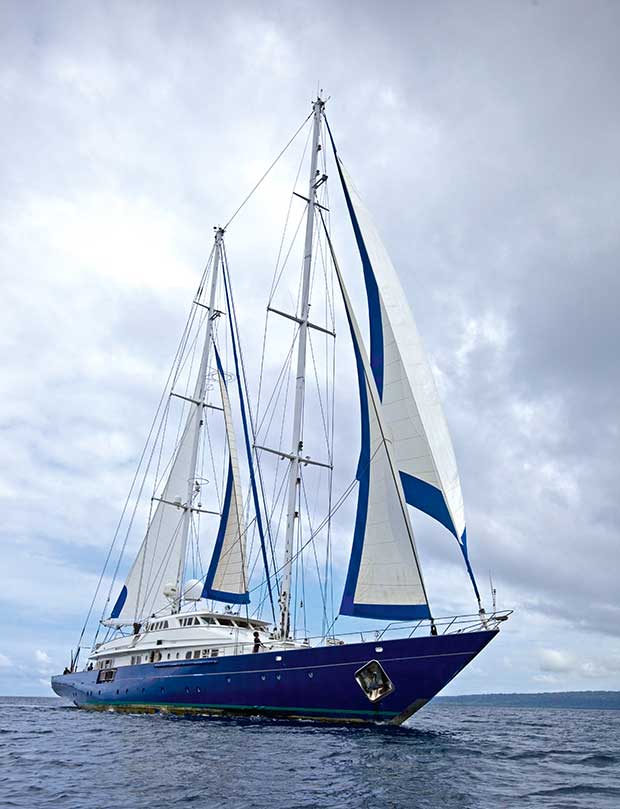 When Sam met Jess on a ski field in Turkey, neither guessed they’d end up running a yacht-support business together in Vanuatu.

This story was first published in the January/February 2012 issue of NZ Life & Leisure.

“I knew immediately she was a perfect match,” says Sam Bell of the Californian language tutor he met at a 2005 New Year’s Eve party on a Turkish ski field a few hours south of Istanbul. “She was cute, nice to be around and liked boats.” Jess Patterson, on the other hand, took a little more convincing. “He was rougher around the edges than I was used to but I soon realized that rough around the edges meant he was always doing something cool.” Jess and Sam Bell in the living-room of their Port Vila home. The world-map wallpaper was a Christmas present from Sam to Jess.

Jess was head of an English-language programme at a local Turkish university when she met the Plimmerton-born graduate of Auckland Unitec’s boat-building and marine-engineering course. At that time Sam was part of the engineering crew on a newly launched and revolutionary yacht, the 289-foot Maltese Falcon. Sam proposed in record time – six months – and Jess accepted, but within a few days Sam had departed aboard the Maltese Falcon for its maiden voyage in the Mediterranean. The universe clearly had plans for this newly engaged couple.

A crew member fell ill and guess who was called in as a replacement? Jess, with no previous sailing experience, joined the yacht in La Spezia in southern Italy and promptly went shopping for her engagement ring. “I was busy with the boat’s launch so she went out with some of the girls and found the ring she wanted,” says Sam. 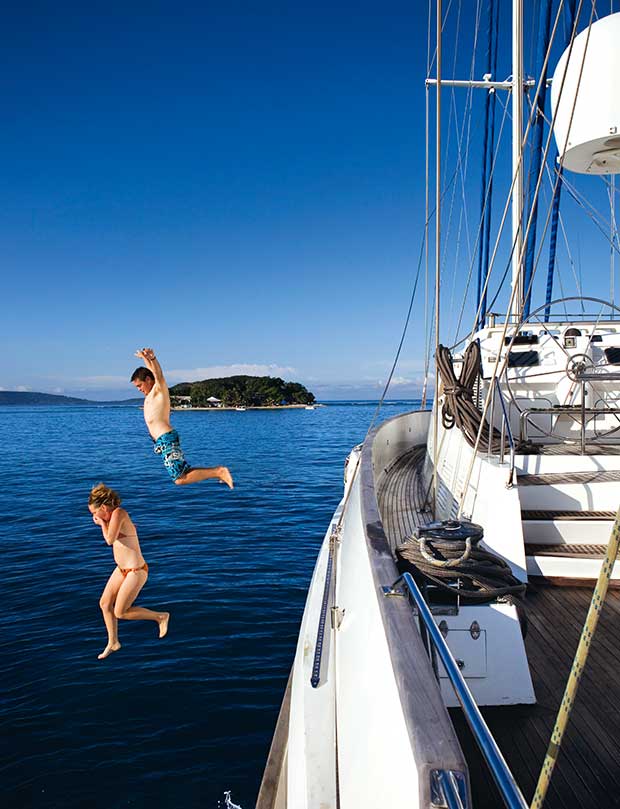 Jess and Sam leap from the deck of Blue Gold with Hideaway Island in the background.

Sam returned home with his new girl in December 2006 and spent the following 18 months showing her beautiful New Zealand – from the sea, of course. In May 2008 they set sail in their 40-foot trimaran Kaleva (“the fastest canoe in the fleet”) to explore the Pacific. Their first port of call turned out to be their last and is now where they call home. They travelled no further than Port Vila in Vanuatu, which is curious, as this is where Sam spent his early childhood while his father assisted the Vanuatuan government during the independence process in the early 1980s, developing agricultural and horticultural infrastructure. 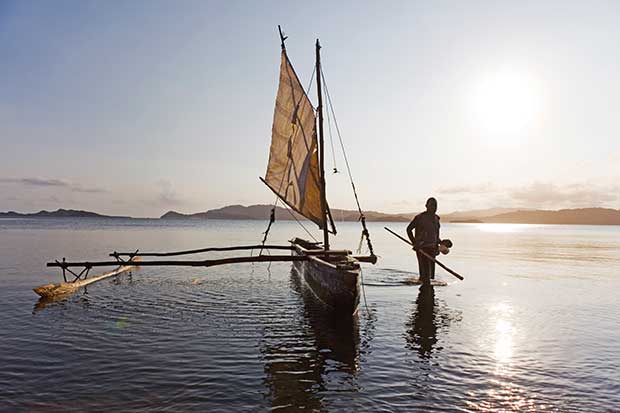 Today Jess and Sam have an extended family in Port Vila: not only their two sons – two-year-old Jackson and 10-month-old Nixon – but also the boys’ nanny Torothy Frank and her cousin Linette. Jess and Sam met Torothy when they sailed to Utanlangi on the nearby island of Nguna. From time to time Torothy’s husband and four teenaged children also come from there to live with Sam and Jess. “Torothy and I hit it off immediately,” says Jess. “I call her ‘Matua’ and Linette ‘Deti’.  Matua means ‘big mum’ and Deti means ‘little mum’. They are both mothers to our boys and the house is like one big family of three cultures: a Kiwi, an American and ni-Vans (meaning ‘from Vanuatu’) living under one roof.” 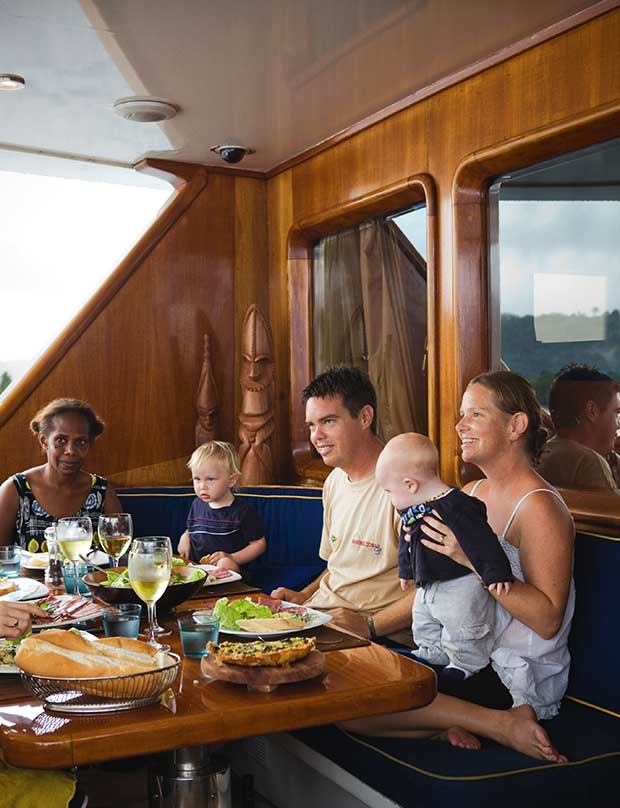 Lunch on board: from left, Torothy, Jackson, Sam, Jess and Nixon.

Sailing is in the blood on both sides for this couple; Jess’ grandfather and father were Navy men and her grandfather was also a fisherman in Southern California. Sam, who learned to sail in Port Vila, owned his first yacht when he was five and has been in love with the sea ever since. From the age of 10, he dreamed of being a captain and his career has followed this dream. “There’s nothing better than being on the water, away from everything, harnessing nature’s power and being totally self-reliant. I feel the ocean and the sea air in every part of my body and soul,” he says. The experience of sailing to the Antipodes Islands south-east of New Zealand on the ex-Peter Blake Lion New Zealand boat Phantom of the Straits when he was 17 inspired Sam to learn everything about boats, marine mechanics and navigational equipment. At 20 he joined the 1915 schooner Mariette as an engineer, which coincided with Mariette winning the Concours d’Elegance during the America’s Cup 150th Jubilee. This involved a “harrowing two days” in which the yacht was inspected from stern to bow in the greatest detail. “Every pipe had to be polished evenly and all the bolts had to be facing the same way. Everything had to be perfect.” 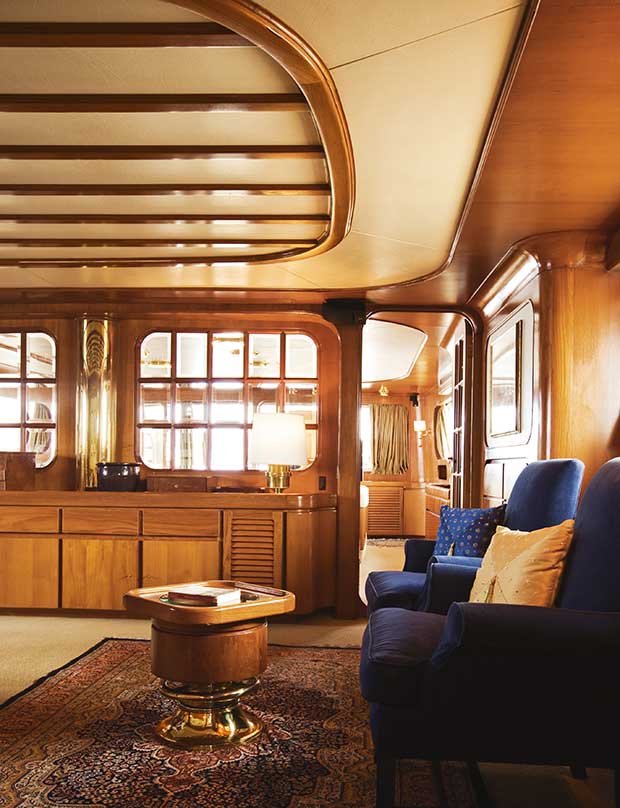 The dining-room on Blue Gold, resplendent in polished teak.

Jess says Sam’s skills as a marine engineer and IT specialist are enhanced by his resourcefulness and ability to adapt well to all situations. His latest project involves setting up solar-powered telecentres throughout remote areas of Vanuatu. Before that he installed internet satellite dishes in the outer islands, allowing people to make transactions electronically through the National Bank. It is not all a tropical-paradise lifestyle though and sometimes it is anything but idyllic. “Making simple things happen in Vanuatu is not always plain sailing,” the couple says. 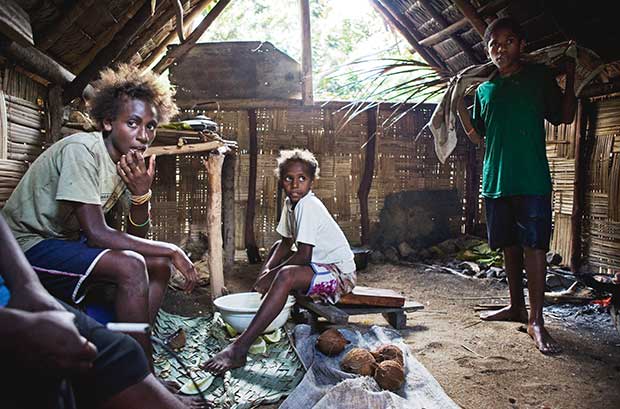 Another side of village life in Vanuatu is exemplified in a makeshift kitchen where a family grates coconuts.

With help from both their families, in 2009 Sam and Jess started their Vanuatu-based business called Kaleva Yachting Services, catering to the needs of yachts and their crews. Any and all problems are solved. Take a crew member on a tour of the islands; arrange to have an engineer from South Africa flown into a remote part of northern Vanuatu and then fly him out again in five days’ time? No problem. What about chartering a plane to carry produce to a boat in a remote area? Easy. 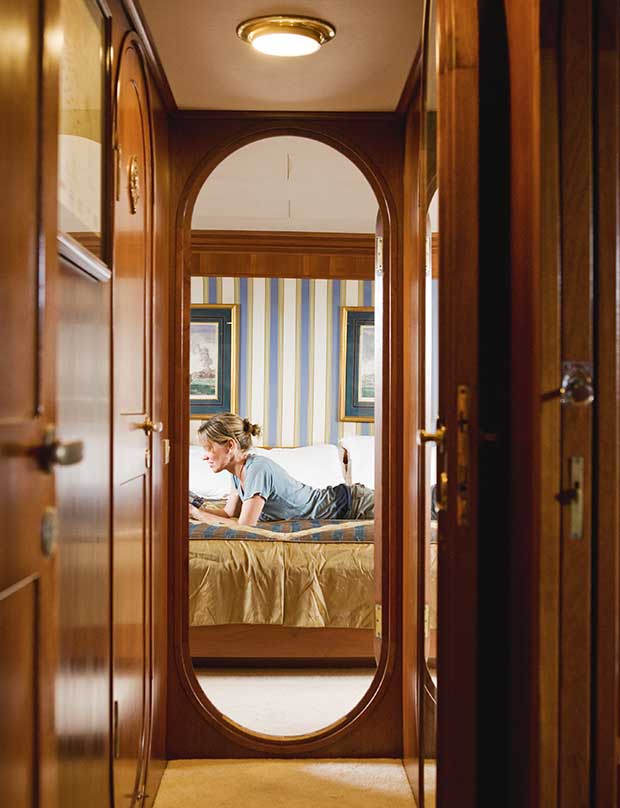 It is a busy life with 15 boats on the company’s books at any one time and a list of tasks to carry out for each one. The phone rings from sunrise to sunset and in the yachting season this couple is lucky to manage one day off a week. “Another big boat arrives back tomorrow while another one wants us to organize an 80th birthday party on a beach on a remote island with traditional dancing and the full works! People think it’s easy but the logistics of ensuring things happen are quite a challenge.” But the love of the sea hasn’t left them, despite their demanding schedules. When they do get time off, they go sailing. “In the off-season we try to take a month or two somewhere out of Vanuatu.” 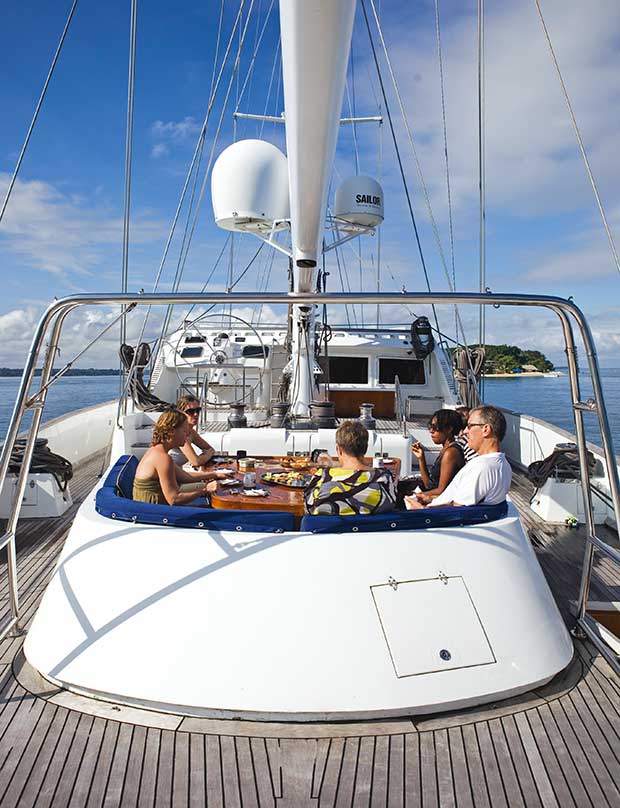 Afternoon drinks are enjoyed on the top deck.

They are full of admiration for the locals. “This place is described as a blend of Laos, Samoa and Fiji and its streets are overflowing with bright and cheerful ni-Vans,” says Jess. “They are full of love and their culture is very diverse. Each island and each village has a distinct personality: varying dances, customs and language. That is why it is so amazing to visit the country by yacht because each place is magical in its own way.” 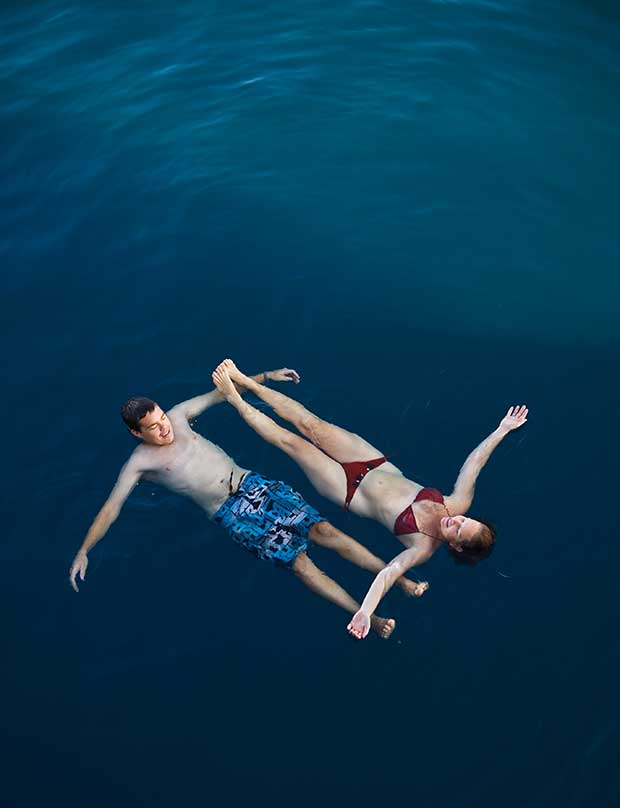 Sam and Jess take a moment to unwind in the water near Port Vila.

“While getting ready to deliver a sailing yacht from Tahiti to New Zealand, we cruised to Moorea in French Polynesia. While at anchor there we were approached by two humpback whales, a mother and her calf. We quickly jumped into the water and spent the next hour snorkelling neck and neck with them. I was trying to make the calf do barrel rolls by doing them myself – very badly – and the calf was copying – also badly. It really felt like I was playing with it! The mother spent the whole time under the calf while it played on the surface, swimming along keeping an eye on things, and then she did this perfect barrel roll. Then from the distance we were joined by another huge whale which we assumed was the dad and a little while later they all dived deep and disappeared.”