We throw out a mountain of electronics each year, but new recycling technology could help build a circular economy for more sustainable gadgets.

Moving house recently turned out to be every bit as stressful as I was warned it would be. Wrangling two sets of lawyers and banks on settlement day was difficult enough, but then the house movers dropped my iMac off the back of their truck. They returned it to me in pieces, red-faced with embarrassment.

My broken computer may well end up in the bowels of Blubox, the new electronics shredding device operated by Computer Recycling in Auckland capable of processing at least 2000 tonnes of e-waste yearly.

If my iMac does make it there, first it will be assessed and catalogued by a human sorter. Its hard drive will be removed, and the processor and memory chips are likely to be reused. Then the remaining parts — the steel and aluminium frame, the screen and printed circuit boards, and the hard drive — will be dropped into Blubox.

The industrial shedder’s violent teeth gnashing will reduce the components to 15mm metal and plastic chips. Then the really smart part of the process begins.

The chips pass onto a conveyor belt, where optical cameras and lasers examine their density and identify their composition.

Air nozzles then blow them into bins, sorting them into different types of metals and plastics.

Computer Recycling’s managing director Patrick Moynahan says the Swiss-designed and French-made Blubox, one of only eight currently operational globally, is more than 90 per cent accurate. It means that large bins of metals and plastic can be more quickly prepared for export to specialist metal and plastic processors. The flakes of circuit boards will be shipped in containers to Antwerp in Brussels, where they will go through a chemical smelting process to remove trace elements of the gold, silver and copper contained in them.

“The profitable bit is the printed circuit boards,” says Moynahan. “If you send 1000 kilogrammes of material, you might get 80 grammes of gold.”

That would net you close to US$5000 (about NZ $7700) at gold’s current market value. But Computer Recycling isn’t just interested in precious metals. It sifts and sorts every bit of a flat panel screen, computer or smartphone with the resulting steel, aluminium and plastic destined for further processing in South Korea, Taiwan and Japan.

“We need all of it to work; otherwise, we are just cherry-picking the most profitable stuff. That’s my ethos for the business,” Moynahan says. For too long, recycled electronics have ended up at massive dump sites in countries across Africa and Asia, where lowly paid workers and even children scavenge their precious parts. “It is a market with a lot of smoke and mirrors. It’s important that we know that it is going to reputable companies.”

The flakes of metal and plastic are melted down and re-engineered into base materials, reducing the need to mine for new ones. The market is expanding rapidly as major electronics makers come under pressure to reduce their environmental impact.

But in New Zealand’s case, a lack of formal regulation and end-of-life recycling schemes sees an estimated 80,000 tonnes of e-waste produced each year. An estimated two per cent of that is recycled; most of the rest ends up in landfills, says Moynahan.

More stories you might like:
4 easy activities to do with kids over Easter in New Zealand: Egg stencils, Easter biscuits and cards 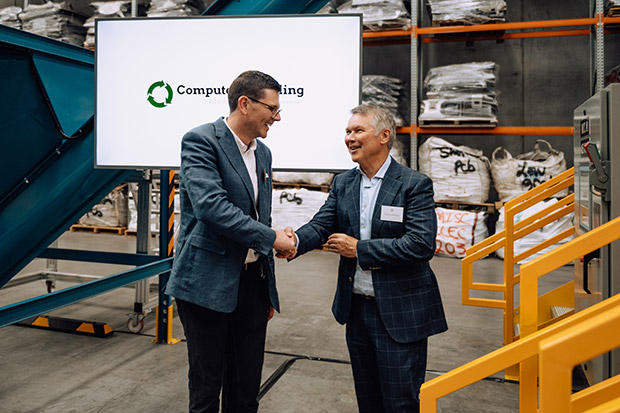 Those are woeful statistics. But the e-waste problem could be radically reduced if electronics makers were required to take responsibility for collecting and recycling devices at the end of their life. “They could charge a tariff on the device, and that tariff could then be redistributed to recyclers or collection points, ensuring this material is being properly disposed of,” he says. “Then there’s no reason we can’t be hitting 50 or 70 per cent recycling rates in the next five to 10 years.”

“We need more movement from central government in the form of regulation. We are one of the only countries in the OECD that doesn’t have some form of e-stewardship in place.”

“There’s a big market for recycled materials, and more companies are seeking them out as part of their sustainability efforts.”

“We want to get to full-scale processing, then build our relationships, so we have more drop-off points for the public to bring their devices.”

2000 — number of tonnes of e-waste BluBox can process each year running one eight-hour shift.

$3.5 million — investment in the Blubox shredder and associated equipment. The Ministry for the Environment contributed a $1.5 million grant.