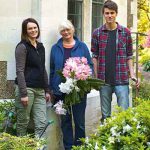 The three generations of Goldsmiths: Sarah, Margaret and Mica. Margaret holds a bunch of pink pearl rhododendrons from a tree dating from early last century. 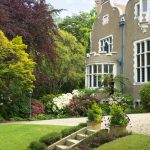 Sarah is a huge fan of the century-old large copper beech, which looks perfect against the austere beauty of the house. 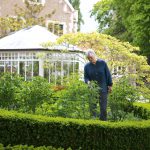 The aphids on the bed of rose de rescht receive a blast of soapy water from Margaret, ensuring deep crimson blooms;. 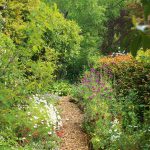 The “dry path” was just a scrubby overgrown bank when the Goldsmiths arrived on the scene. 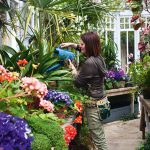 The glasshouse was built in 1988 to an exact replica of the original, which had to be replaced due to rot. 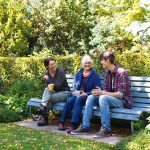 Mica says Olveston feels like a very natural place to work, the nurturing spirit that underpins gardening families continues to be fostered in the grounds. “And the regular tea breaks are like having a family picnic,” he says.

“Mum, why do you spend so much time in the garden?” four-year-old Sarah Goldsmith once asked her mother, Margaret. The answer was elementary.

“Because watching plants grow is full of magic,” her mum replied. Many moons later Sarah discovered that same magic in growing vegetables. And now the mother-and-daughter team – along with Sarah’s son, Mica – work their own kind of green-fingered alchemy on the grounds of the Dunedin landmark, Olveston Homestead. Gone are the days when Margaret would ask Sarah and her three brothers to go and collect sackfuls of nutrient-rich donkey poo from their property. The pair are now equals in the garden. Team Goldsmith work alongside each other in a relationship akin to companion planting; it is their different approaches that provide the strength.

Margaret’s style is soft, billowy and profuse, while Sarah has a more formal, artistic focus, favouring tidy and sharp finishes. She has taken over trimming the tops of the box hedges, as Margaret’s were always a little too curvaceous for Sarah’s tastes. On the other hand, Sarah will always cede to her mum’s greater plant knowledge. Their common ground is a love for both colour and drama.

Margaret has been Olveston’s gardener since 2001 when she learnt of the vacancy through a friend. The following week, Margaret was pulling up outside the 1906 Edwardian home to start work, 23 hours a week in summer and 12 in winter.
Her own mother, Rosa, was responsible for implanting a love of gardens in young Margaret and when Margaret started her Olveston job, Rosa would visit and help with the odds and ends, which (as any gardener can attest) are endless. 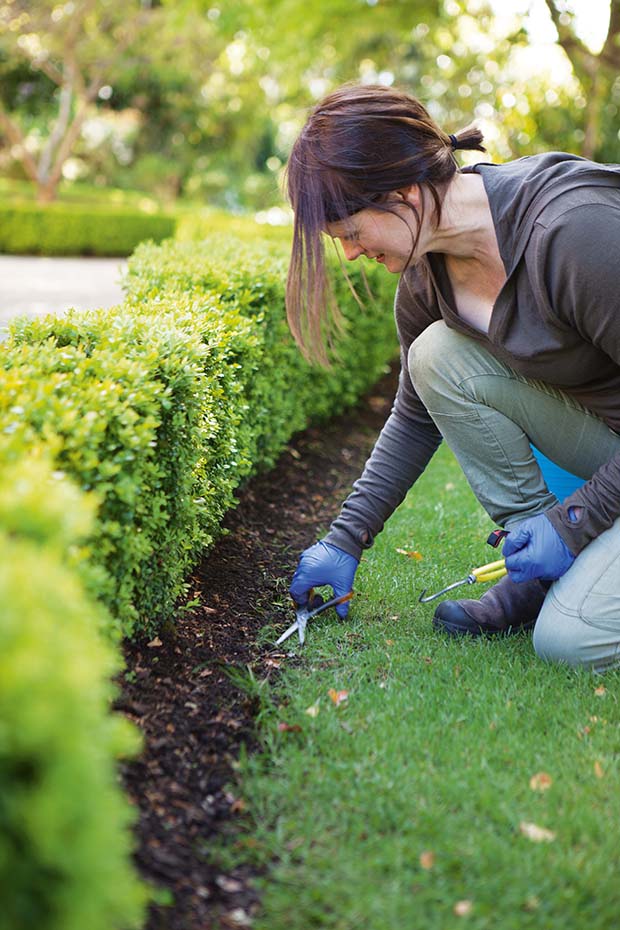 Growing up in Port Chalmers, Margaret remembers “shrubs passing by the window at dusk” long after the formal working day had ended. And Rosa gardened her own near-vertical garden independently for 60 years until her recent retirement at 89.

Busloads of visitors to her property would be amazed at this lady skipping up and down, navigating the maze of tracks zigzagging through the garden overlooking the Otago Harbour.

Rosa never forced gardening on her children, but Margaret was drawn to flower gardening as it seemed like fun. For Sarah however, it was a different story.
Maybe the question she could have asked as a four-year-old (if she were capable of such advanced articulation) should have been: “Mum, why do you spend so much time in the flower garden?” Not that she knew it at that time but flower gardens just weren’t her thing.

It was a gardening-book illustration she spotted as a girl (and still treasures to this day) that melted her heart: a bird’s eye view of the great New Zealand quarter-acre section, complete with a small formal garden at the front of the house, and (the important bit) a big, immaculately groomed vegetable garden at the back.

With the illustration still acting as inspiration, Sarah and her husband Andrew bought a small lifestyle property just to the north of Dunedin city. And for a significant part of the past 15 years, Sarah’s gift to her family has been an abundant supply of homegrown veges. “If you can’t eat it, what’s the point?” she says.

But in 2012, while Sarah was filling in at Olveston while Margaret was on holiday, she surprised herself by falling in love with the garden and homestead. “It was spring and I saw the garden coming to life with combinations of plants creating lovely pictures and I thought Mum did that and that’s actually pretty cool. Later we found that we really liked working together and were having a lot of fun. So we started to job share.” 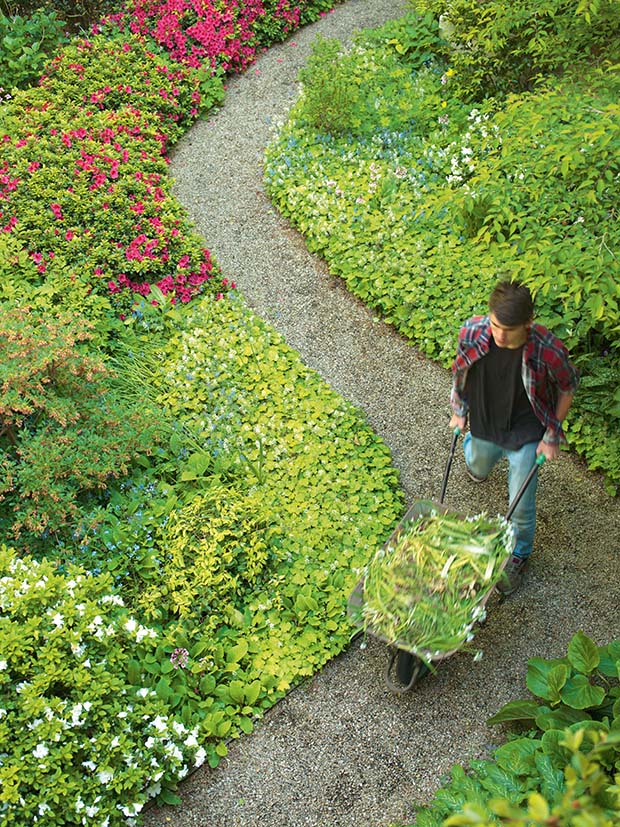 After three years of letting their gardening roles and relationship settle into place, the mum and daughter team realized they needed an extra body to do some of the grunt work. That’s where Mica, Sarah’s then-16-year-old son, entered the picture.
Mica had often visited his mum and grandma at Olveston. The three gardeners share a straightforward job description: to keep the gardens looking their best each day. As any gardener will tell you, it is almost impossible to achieve. Their challenge is the burden that comes with having full creative control, as their collective ideas can often get away on them. And like all good gardeners, they constantly spot faults and defects no matter how small. This can turn into an obsession – Sarah recently moved a rosemary bush 10 centimetres to make its position just perfect (it had bugged her for a long time). Margaret, on the other hand, could have let that one go.

More stories you might like:
5 ways to avoid a bad fencing job and 3 signs you've found a good fencer

Bristol-born David Theomin, the original owner of the house, was known to proclaim, “let things be done shipshape and in Bristol fashion”. And the Goldsmith gardening team must be doing something right as in 2014 the garden was awarded five stars by the New Zealand Garden’s Trust. “I think we live up to David’s shipshape demands,” says Margaret, “albeit in a slightly woolly way.” Researching the back-story of the garden has made Sarah aware of both the history of the house and that as gardeners the Goldsmiths are just passing through. “The garden has been here over 100 years and will continue far into the future.

There are things we have done which will be left and other things changed. We are very aware of the essence of the garden though, and of keeping it modest as it has always been.”
“I would have retired by now if it wasn’t for Sarah,” Margaret says. “Working with her makes being brave easy and we give each other the courage to make decisions and changes. We egg each other on and celebrate the little successes we create together.”

The pair’s favourite time is the early mornings in summer when light and temperature are just perfect. This is when they walk around the garden and decide the jobs for the day.

“It’s just lovely to have a daughter to work with,” says Margaret, “unless of course she is telling me how to do things.” And then they both laugh, in a garden that bursts with rhododendrons so beautifully healthy they almost appear to be chuckling themselves. GARDENING GOLD
With the idea of starting garden tours at Olveston, Sarah Goldsmith spent last winter diving into scrapbooks, photo albums and newspaper clippings to research the garden’s history.
The 1906 homestead was built in the Edwardian style but with a very park-like Victorian garden, complete with a formal rose garden, minimal underplanting and delphiniums individually staked up like rows of soldiers. While the bones of the garden are still the same, with beech trees, box hedges, rhododendrons and paths, the present garden – effusive plantings within a formal framework – has caught up with the Edwardian house.

For the tours, Sarah has created a folder of photos so that guests can stand at spots around the garden and be transported back in time. Dorothy Theomin, who gifted the house to the city on her death in 1966, was a skilled photographer. One of her photos captures a scene of wisteria climbing up the side of the house, past open windows (you can almost feel the invisible summer breeze). Dorothy’s bag has been discarded on a chair, suggesting she saw the scene and caught it right in the moment.

Dorothy was also an avid and skilled mountaineer, making regular climbing trips to the Alps. Another of the photos shows a rockery of ranunculus lyallii (mountain lilies), likely transported in her pack from one of these trips. Sarah is now patiently germinating some seeds at her home, trying to recreate this memory of Dorothy as part of the garden’s story. She doesn’t know if it will be successful but, in true gardener spirit, suggests it’s worth a go. FLOWER PEOPLE
Three generations of Goldsmiths share their love of gardening.
Margaret: On long summer evenings I enjoy walking around the garden at dusk, when broad shapes replace daytime detail and weeds and unfortunate areas are masked. Darker flowers vanish in the shadows but pale colours suddenly light up the garden like lanterns – like the white foxglove spires and pale green plumes of snow tussock. My favourite evening flower at the moment is the Austen rose, Pilgrim, its pale yellow blooms commanding all attention as the light fades. A quiet evening walk around the garden is a very restful way to end the day.
Sarah: My philosophy for vegetable gardening is to start with the soil. Vegetables are pampered princesses and need the best of everything, from soil to your attention. I also like to leave a few plants from each crop to flower and set seed. They look beautiful but it’s also nice to know what the plant was trying to become before you dug it up. You can also find some good plants for the flower garden this way, such as parsnip, salsify, orach and chervil. With ornamental gardening you have to please your own eye. There’s no right or wrong, it just has to look right to you – and if you’re working in a public garden you have to hope that others agree with you.
Mica: Find ways of doing things that work for you, as what works for someone else may not work for you. Take regular breaks to reflect, admire or acknowledge what you have done.