Why your should feed your chicken flock fermented food


Feed your flock fermented food from This NZ Life on Vimeo.

Kombucha. Kimchi. Kefir. Fermenting food is all the rage for humans, and now it turns out it can be of great nutritional benefit to your flock too.

The new diet sweeping the chicken world is fermentation, but is it a fad or a useful addition to the diet of your flock? And is there any scientific evidence to say it’s beneficial?

Every so often a new ‘diet’ comes along which claims to be the answer to gaining weight (or losing weight if you’re a human), the most economic, or something else that will help your chickens live a long and happy life.

Fermenting human food to improve its quality and to preserve it for a longer period of time has been around for hundreds of years and it’s delicious stuff: think sourdough bread, pickles, cheese, beer and wine. Basic fermentation is a pretty simple process too, steeping solid material in a liquid to release naturally occurring bacteria or probiotics which are good for the gut.

As with human food, there’s a particular process to fermenting poultry feed. Get it right and the upside is the creation of beneficial nutrients that otherwise would not be available from the food in its dry form. The probiotic effect it then has on the gut flora improves birds’ immunity to disease, and research has shown it can also improve egg quality, shell strength, and the number of eggs your bird produces over a year.

There’s also an economic benefit because if it’s done right, your birds will get more nutrition from less feed, giving you better feed efficiency. Additional benefits have been shown to be a drop in manure levels, firmer poo, and less water uptake as birds are receiving extra moisture in the feed.

The downsides can be the mess of dealing with wet, sloppy feed, the daily stirring and mixing, possibly the smell of the fermentation process, and that the birds do get messy while eating, especially if you are feeding it to ducks. 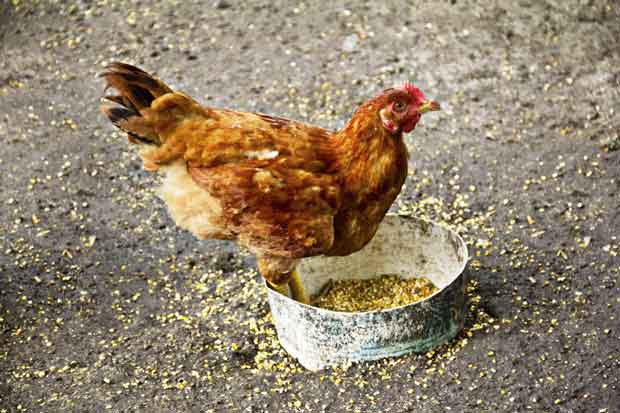 10 FEEDS YOU CAN EASILY FERMENT FOR YOUR FLOCK

HOW DO YOU FERMENT CHICKEN FEED

The basic process is to cover feed ingredients in water and let them stand for 24 hours to four days to allow a process to develop which creates probiotics and enzymes. This in turn starts to break down the ingredients, making them both more palatable and beneficial to your chickens, a process known as lacto-fermentation.

Virtually anything you would normally feed to chickens can be fermented, but research shows it’s especially beneficial if you’re fermenting grains.

It makes them more digestible and birds take up more nutrients from it, but the process also helps to create new vitamins which are not normally present in the feed in any quantity, including vitamin K and some of the B vitamins. It also breaks down unpalatable husks like those on barley, which normally prevent the bird from gaining maximum nutrition because the gizzard can’t break it down.

If your flock’s normal diet is commercially-made feed plus grain then you could change that to about 85% pellets and 10% scratch grains, with the balance made up of whatever normal scraps or supplements you feed out. However, fermenting 100% commercial feed will work equally well. 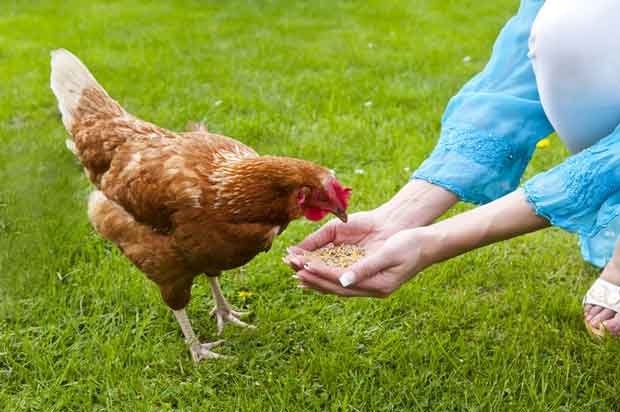 The initial fermentation process takes 3-4 days but after that, by using some of the initial batch and liquid as starter like you would with yoghurt or sourdough, it will only take 24 hours.

You need a good container with a lid for fermenting. Food-grade plastic buckets are ideal but the acidic nature of the brew may leach chemical from the plastic over time so earthenware or glass containers are best.

Estimate the amount of feed your flock uses daily and place it in the container, and add an equal quantity of water – you’ll find the water should cover the feed and this is important as it helps to prevent ‘bad’ bacteria, yeasts and fungi from infecting the mix. Sit the lid in place but leave it sitting loose – don’t seal it – as you want the mix to stay aerobic and it will require oxygen to do that.

Stir daily. Over 2-5 days it will bubble, the smell will gradually turn from sweet to a slight sour or tangy smell like yoghurt or pickles (created by the production of lactic acid), and a white scum or film will form on the top.
Warning signs that something has gone wrong include a rotten or putrid smell, or a strong smell of ‘alcohol’ – do not feed anything smelling like this to your birds.

Every time you feed out a batch, retain some of the liquid and solids as a starter for the next batch; add equal quantities of feed ingredients and water into the ‘starter’ and it will be ready within 24 hours. Warmer weather will speed up the process so in winter try to have the fermenting buckets in a reasonably warm place. 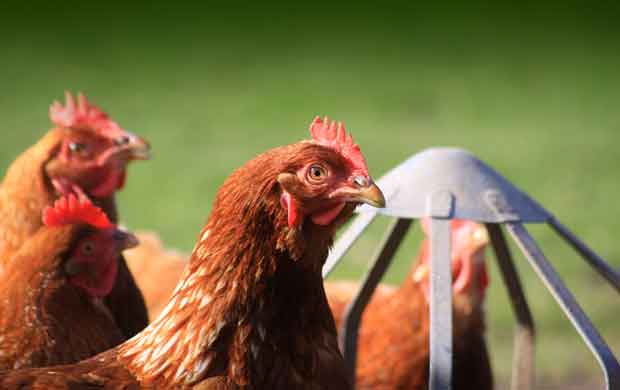 HOW MUCH DO YOU FEED OUT?

Initially you should measure out the normal daily feed allowance for your birds (anywhere from 110-140g or so for an adult bird, depending on its size and breed) but eventually you should find that because there are more nutrients in the fermented feed and it satisfies their appetite more quickly, you should be able to use less feed.

Some proponents of this method have noticed a saving of up to 50% on food costs, but it’s important to make sure your birds are staying in good condition and adjust how much you feed accordingly.

The right amount to feed out should take your birds about half an hour to finish, but another way is to watch for when the greediest of birds are full and walking away. There should still be enough for timid birds to eat.

Place the food in a trough. Plastic guttering is ideal as it’s easy to clean so it won’t attract flies, and become infested with mould or bacteria – and you can also get long lengths so there’s plenty of room for all your flock to eat from it at the same time.

Medicated Chick Starter will not be altered by fermentation and the medication will remain active.
It is important to still feed the appropriate feed for a bird’s age, ie do not feed a mix made up with Layer feed to young chicks or a mixture made using medicated Chick Starter to laying hens.

WHAT DO SCIENTISTS SAY?

There is a scientific basis for the usefulness of fermented feed for poultry, although there were drawbacks too. In 2009, British Poultry Science magazine reported on the effects of fermented feed on egg production, egg quality, plumage condition and composition, and intestinal flora of 480 hens aged 16-38 weeks and compared them with birds of the same age fed a standard dry feed. The study found positives and negatives:

It was concluded that the feeding of wet, fermented feed offered potential benefits for health and nutrition, but due to the logistics of feeding large flocks there are some practical problems. It is also noted that it is beneficial to have a training period during the rearing time for birds to become accustomed to wet, fermented feed.

WHY FERMENTATION ISN’T THE SAME AS SPROUTING GRAINS

Sometimes there can be confusion with the idea of fermenting grains and sprouting them, as both involve the addition of water to grain. In the case of sprouted grains, water is added and rinsed off daily until the germinal root appears and there is significant growth of the green sprout. The grain, sprouts and all, is fed to the chicken, and some flock owners claim this is a beneficial way to feed grain.

There are pluses and minuses. The process of germination utilises the starch stored in the grain during the first week before photosynthesis on the green sprouts starts and the root is able to draw up minerals from the ground/water. Therefore it appears that 25-30% of the dry matter (DM) of the grain is used up, making the feeding of dry grain/seeds more cost efficient.

There are benefits to using sprouted grains, especially in winter when fresh green feed may be short. It appears there may be beneficial natural enzymes which are activated and can lower the viscosity in the gut, making it easier for the nutrient content to be more easily metabolised by the bird. Vitamins A and E and Omega 3 fatty acids which are present in green leafy pasture may also be provided by sprouted grains such as wheat.

One thing common to grains and seeds before either the sprouting or fermenting process starts is that they may contain some anti-nutrients, which actually protect the seed so that it might pass through the digestive tract unaltered, especially if the grinding action in the gizzard does not affect it to break down the hard outer husk. These anti-nutrients can include:

Problems with eating these antinutrients include blocking calcium, magnesium, copper, iron and zinc in the intestinal tract which can result in deficiencies in these essential minerals.
By sprouting or fermenting these grains it can eliminate the anti-nutrients and increase the availability of B vitamins, folate, vitamin C and essential amino acids like lysine and the enzymes which make the grain easier to digest. Beta carotene present in the green sprouts is also an aid to yolk colouring. 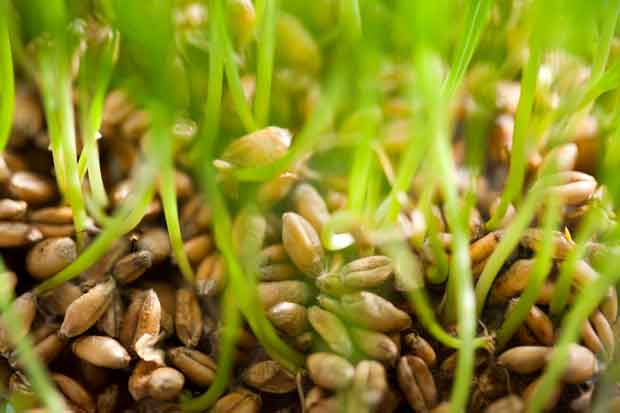 HOW TO SPROUT WHEAT

1. Add grain to a large container, cover the grain with water and soak 8-24 hours.
2. Drain off water and spread grains 2cm deep on a shallow tray.
3. Rinse grain in water then drain at least twice a day for six days.
4. The sprouted wheat is at its most nutritious by around Day 6.

There are lots of things you can do to make a nest box more enticing for a hen – keep it in a dark place, make sure it is mitefree, make a deep cosy bed so she can snuggle in and feel safe while she is laying.

But Wanganui Poultry Club member and long-time poultry breeder Janis Cusack has found people who are new to hens think they must have nest boxes up high and attached to the walls of their coop to get hens to lay in them, and says beginners are surprised and relieved when she tells them nest boxes at floor height work just as well.

“I think it’s important that people know they don’t need specially built ones attached to a wall. Several large or medium wooden boxes with hay or straw in them are fine sitting on the house floor for big birds, and bantams and silkies are happy to make their own nests in the hay.

“They just need to be safe and comfortable to lay in.”