Take a leek & make a cake 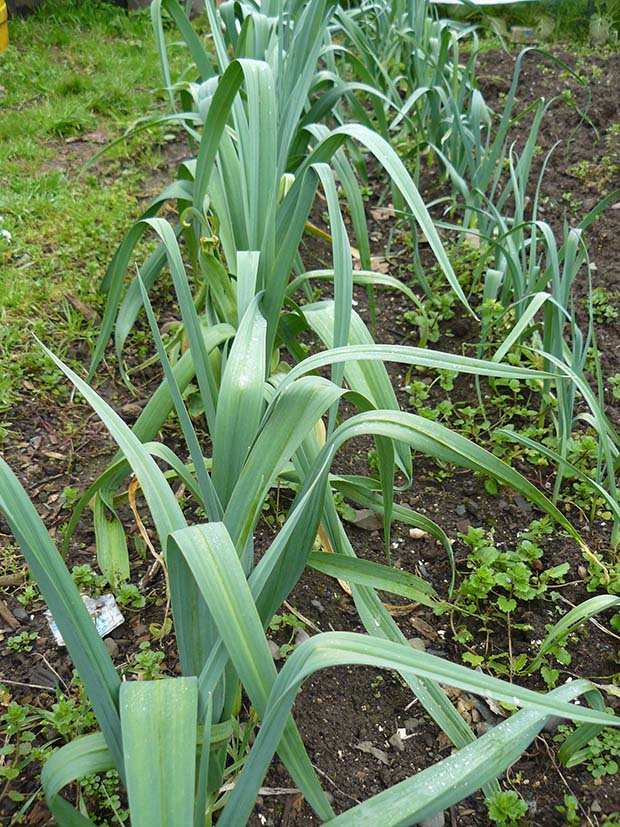 Leeks are a vegetable that Kristina loves and hates, and then she gets baking.

I love leeks because they are so much more gentle on my system than their relatives, garlic and onions, almost as if they belong to a completely different family really (as far as my stomach is concerned anyway).

If you want to know what I mean, try making leek and potato soup with onion instead: not the same difference. This is currently one of our son Theo’s new 12-year-old catchphrases, and considering that he is the one who insists on making it (with leeks, Mum) as soon as the weather starts to get rainy and cold, I think he knows that they are definitely not the same.

I’ve probably chosen too strong a word when I say I hate leeks. After all, we can’t all be fabulously green-fingered, turning out leeks with an average diameter of two inches and so long that, from a distance, it appears to watchers that one is carrying a small tree instead of a leek.

My mum grew leeks like that but sadly I didn’t inherit her leek-growing genes. I have resigned myself to being an excellent salad greens, herb, rhubarb, celery and silverbeet grower with the occasional success with broccoli. It’s a good thing that I am a keen forager and recipient of garden produce generously shared by my neighbours, otherwise I might not even be able to pluck up the courage to start writing about leeks.

Now this is not to say we haven’t tried our best, several times. They are a bit like carrots for me. People say ‘ah, just chuck ‘em in the ground and leave them alone’. Nope, not for me. So far it’s been a few or no carrots, and very small leeks and given the quality and amount of compost I put into my garden, I know it’s not a nutrient problem.

I have even tried the broomstick method without success. This is where you poke a broomstick-like object into the ground and drop young leek plants in. No tamping down the soil or filling in the hole: just walk away and let the leek get on with filling the hole, and supposedly expanding. Sure enough, my leeks grew but they never quite got the expansion bit and although I harvested them and we ate them – little pencils that they were – and tried to be suitably proud of my small achievement, I couldn’t help comparing my puny little fellows with the greengrocer’s giants.

I won’t give up though. There’s a wicked brew bubbling away out the back, containing all the usual suspects: fish heads, seaweed, nettles and comfrey with a good smattering of sheep pellets stirred in and this will feed my next lot of leeks.

But never mind about not being able to grow them. That doesn’t stop me cooking with them at every opportunity. Leeks are rather harsh when eaten raw but when cooked, their delicate sweetness imparts itself to whatever dish you happen to be making. This is why I wasn’t surprised to find a Welsh high tea leek cake in a cute little recipe book at my friend Mary’s house. Mary has a very large and varied collection of books and I could probably spend a whole lifetime just reading at her place in Palmerston North. Thanks Mary, for indulging me.

The Welsh are mad on leeks and all because of a story that goes something like this: in the 7th century, the Britons won a battle against the Saxons because their patron saint, St David, told them to wear leeks in their hats. Whatever the reasoning behind this, it is common practice in Wales to wear leeks in your hat on March 1st – St David’s Day – and eat lots of leeks wherever possible.

More stories you might like:
How to get more dahlias for free: How to force tubers in winter

Disguising vegetables in bread has become a parental hobby of mine due to Theo’s lack of enthusiasm for most things green. Fortunately this one has hit the nail on the head for almost all the kids we know and has become one of those ‘I need to whip something up in a hurry’ go-to recipe for events that include persons of all ages. In Italian, it’s called a galette but some small happy person called it ‘napkin bread’ and it stuck.

Do you know the right way to wash leeks?
Soil is often trapped between the layers of leek leaves so this is my technique to getting rid of it.

First, trim off the base, and cut away the uppermost part of the leaves. If the outer layer looks or feels tough, remove it as well.

I find it easiest to slit the leek in half length-ways and then rinse well under running water, pulling back the layers so that any dirt at the base of the green bit of the leaves is removed. Alternatively, you can slice the leeks, then put them in a colander and wash them under running water. 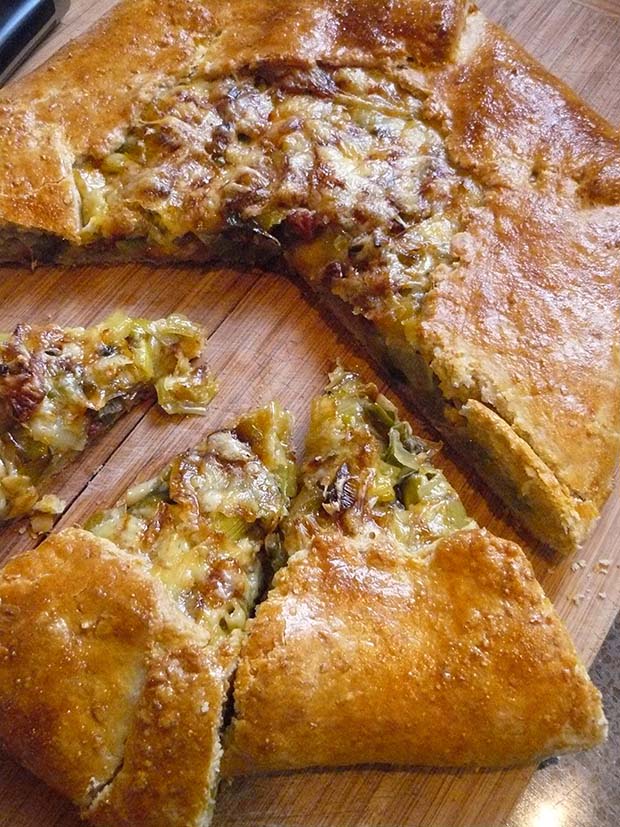 METHOD
Rub the sour cream and grated butter into the flour/baking powder/salt mix until crumbly. Add just enough water to make a workable dough. Knead it a bit in the bowl, then wrap in plastic wrap and pop into the fridge while you make the filling.

METHOD
Fry the leeks and garlic in the butter until slightly caramelised, remove from the heat, add the cold meat and leave to cool. Roll the dough out into a circle on a lightly floured piece of baking paper that fits on an oven tray. Leave a 6-7 cm rim of dough clear on the outer edge, spread the filling evenly over the centre, sprinkling with the cheese and salt and pepper, then brush the rim with the beaten egg and fold it over onto the filling. Brush with egg on the outside and pop into 200°C oven to bake for 30 minutes or until golden brown. Leek ‘cake’
I like making leek cake in a ring tin, letting it completely cool and then turning it out onto a bed of lettuce. If preferred, it can be made in a shallow ovenproof dish and served hot, though it is more traditional to serve it sliced as a cake. It’s best to use flour potato varieties like Ilam Hardy, red Rascal and Agria.

METHOD
Pre-heat the oven to 180°C. Slice the potatoes thinly and place a layer over the base of a well-buttered cake tin. Sprinkle over a layer of leeks, dot with butter curls and season with salt and pepper. Continue this way, finishing with a layer of potatoes. Brush generously with melted butter and cover with tinfoil. Cook for 1 hour, removing the foil 15 minutes before the end of the cooking time.