This week in the water cooler: Lynley walks the Waterview tunnel, Yolanta is counting birds and Emma learns about the strange wrestling world. Today and tomorrow (July 1 and 2) are the last two days to help in the annual nationwide count of New Zealand’s birdlife. The Battle for the Birds campaign needs New Zealanders – everywhere – to take an hour out in their gardens or backyards and count every bird spied in that time. Those merciless predators (rats, stoats and possums are the worst) are destroying our birdlife nightly, and the results of this survey can help focus effort in the annual $20m campaign to rid the land of these mammals.
“New Zealand is a cathedral without a choir,” says charitable trust Next chief executive Bill Kermode. The choir that was here has gone, and until the introduced mammalian predators are reduced and then gone, that cacophony of birdsong will not return to our forests.
To do your bit: count every bird seen in a one hour period and then go online to records your results. For each species, record the HIGHEST number seen (or heard) at one time. Post your results here 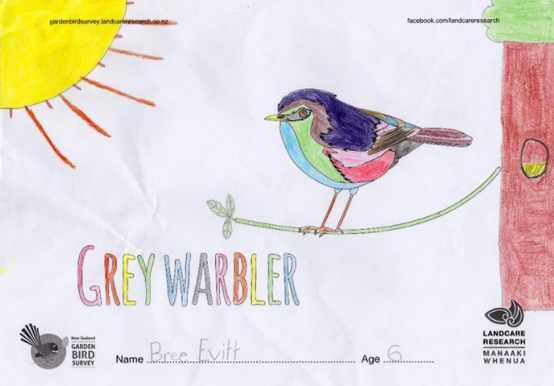 If it’s raining, the children can still be involved: download one of 16 birds from the online colouring-in competition. Choose from the Tui, Kereru, Myna or the Fantail. Great in helping

PS if you have birds on the brain, why not try making our willow bird feeder

Make your own willow bird feeder

NO LONGER LOOK BUT NO TOUCH 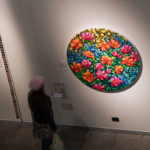 Caz Novak’s sculptural impasto painting Floriography with ‘touch station’ allows the visitor can feel a sample of the paintwork. 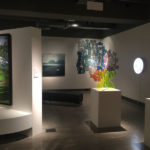 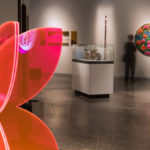 In foreground is one of Ian Clothier’s perspex Light Plants, while the background painting is Caz Novak’s Floriography. 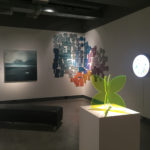 Taranaki’s vibrant and diverse arts community is currently on display with works from 65 selected artists in mediums ranging from painting, printmaking, sculpture, ceramics and photography to jewellery and textiles at New Plymouth’s Puke Ariki Museum.

The Home Work exhibition, open until 19 November, was open to all artists living in Taranaki and is cleverly curated with themes and colours sympathetically grouped to make the visitor experience flow. Innovative touch stations allow visitors to handle small sample pieces of the many textured works on display. This is fun, interactive aspect is being enjoyed by both young and old and differs from the more traditional ‘look but please don’t touch’ rule of art exhibitions.

Children have their own printed scavenger hunt to complete while the adults view and read about the artworks at their leisure. 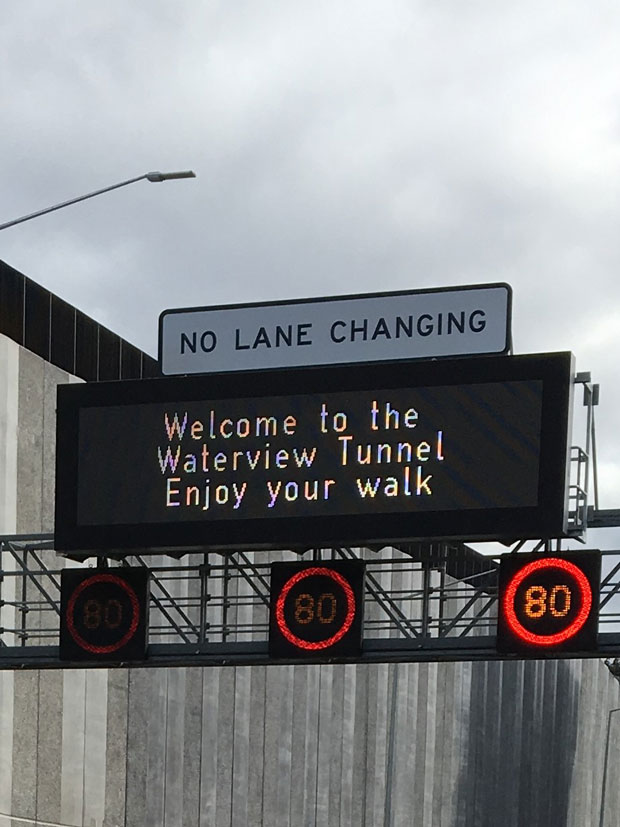 While many Aucklanders are waiting, with fingers crossed and breaths baited, to see if the promised game-changing Waterview Tunnel unclogs the city’s western arteries, 40,000 people took to their feet this week to help unclog their own arteries with a brisk walk into the tunnel – The about-to-open tunnel marks the completion of the Western Ring Route – 48km of motorway connecting Manukau, the city, West Auckland and the North Shore. “Alice”, as the tunnelling machine became affectionately known, bored for nine months one way and then turned and bored back the other way to create a two-tunnel effect with three lanes in each direction and at a cost of $1.6bn. Traffic engineers believe the Waterview Tunnel opening represents the most significant event in terms of Auckland traffic since the opening of the Auckland Harbour Bridge in 1959. It is supposed to transform the way people and freight move around the city by transferring traffic onto the state highway network. Alleluia, we say. We live close to the tunnel and have regularly reviewed progress from the top of Mt Albert which looks over the new motorway. The chance to check out the tunnel seems to have really appealed to many people. Last Sunday when we were crazily heading out at 6.30am (having been up to watch the America’s Cup racing at 5am) we discovered large groups of people queuing with their bikes to cycle through the tunnel. I don’t think I would have been that keen. But we did line up at a more reasonable time on Monday to see where all that money went. And we are now looking forward to driving through it – at a somewhat faster pace, and enjoying the “transformed transport system”. I’m just worried about who is going to keep all that cream paintwork clean.

GET YOUR GLOW ON

There are few things I’d like to watch less than TV wrestling. The strange costumes, the theatrics plus… it’s not even real. I just don’t get it. So I was a little surprised to actually enjoy GLOW, the new Netflix drama based on a real show from the 80s with an all-female cast of wrestlers. GLOW follows a group of aspiring actresses who show up for a mysterious audition in a seedy gym. The woman are scrutinised by a schlock horror film director but on their looks rather than their athletic ability in the wrestling ring. The series pokes fun at the misogyny and crudeness of the storylines and is based on that 80s show called Gorgeous Ladies of Wrestling which aired from 1986-1992. Watch the documentary GLOW: The Story of the Gorgeous Ladies of Wrestling (also on Netflix) to learn more about the women who sprayed glitter in their hair and played characters such as Matilda the Hun.

“We were live comic book characters. It wasn’t about whether it was it real or fake,” says one of ‘The Housewives’ a comedic duo who dressed up to wrestle in shower caps and bathrobes.