Water cooler: the boss on a fox, a film about fashion and trying Onggojip


In this week’s water cooler, we dream of flying through the jungle, we lust after couture, make coconut yoghurt and test restaurants with unpronounceable names.

THE FIRST MONDAY IN MAY

The First Monday in May from Bryan Sarkinen on Vimeo.

Do you believe fashion is art? Does your heart beat fast for best-dressed lists? Did you clap your hands in glee when Rhianna arrived at the 2015 Met Gala in the immense fur-trimmed yellow gown that took two years for designer Guo Pei to create? If you answered “Yes” to any of the above, then you must watch the newly released documentary The First Monday in May. Following the creation of the 2015 exhibition “China: Through the Looking Glass” at the Metropolitan Museum of Art and the annual Met Gala, the fundraising launch event (held on – yes, the first Monday of May) Andrew Rossi’s film is a peek behind the silk (of course) curtain into a very rare world.

Tip-toeing through issues of cultural sensitivity, exploring the temperature-controlled depths of Yves Saint Laurent’s archives, unpacking vintage couture and working out the politics and minefields of a celeb-packed seating chart – it’s a beautifully crafted look at the quiet chaos that is involved in creating one of fashion’s biggest events. Anna Wintour, behind her day-and-night sunglasses, beneath her signature bob and clenching her ever-present extra-large Starbucks takeaway, is slightly terrifying. In select cinemas now – firstmondayinmay.com

Also recommended for the fashion-afflicted: the 2014 documentary, Dior and I, which follows designer Raf Simons as he creates his first runway collection for Dior. If anything would lead to dreams of spending a house deposit on a dress, it’s this film. diorandimovie.com

A FLYING FOX FOR ADULTS 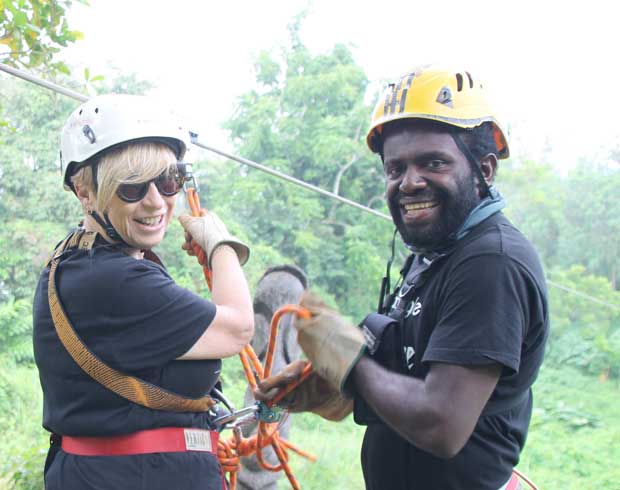 As a child I leapt at any opportunity to go on a flying fox. In recent years my husband has had to stop me jumping on the one in our local park even though I was prepared to go under the cover of darkness. He refused to let me, pointing out that I’m well over the recommended age.

A recent family cruise through the Pacific islands promised an opportunity to go zip-lining in Vanuatu and I was first in the queue. The experience was to include: “Soaring through the jungle canopy on six zip-lines and two suspension bridges. Zip platform to platform high in the trees and enjoy breathtaking views overlooking the ridgeline down to Mele Bay. Wobble across the suspension bridge and fly across our 80 meter canyon and back over the top of our seasonal waterfall.” Unfortunately, the water has gone from the waterfall as a result of Cyclone Pam but everything else is as described. It was great fun. The local guides were friendly and experienced and, while it was “island relaxed” as they say, there was a clear sense they knew what they were doing. I’d recommend it to anyone visiting Port Villa and I will certainly be on the look-out for another opportunity to try zip-lining in another location. Watch out for an over-12-year-old flying through an Auckland park under cover of darkness – this time I might not alert my husband to my plans. 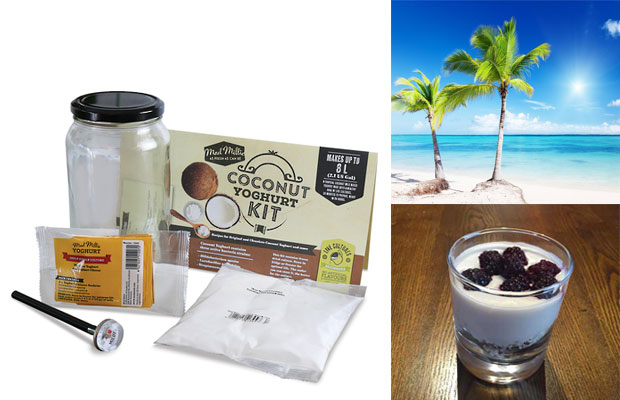 Seven sweet days in the Cook Islands and I was hooked. Every morning, long after the roosters cock-a-doodle-do-ed at 3am, I’d ease into Island Life with homemade coconut yoghurt for breakfast. Dairy of any type is hard to get in the islands, and this tropical yoghurt made without milk is tasty and addictive. Back in New Zealand, I’ve been looking for my coconut yoghurt fix and testing several supermarket brands. Some were nasty, with a gelatinous fatty taste. Others, such as Raglan Coconut Yoghurt, came close to my tropical experience but the $14 a pot price tag made my wallet snap, crackle and pop with woe!

There was nothing for it but to make my own. There are recipes online, but I decided to speed-up things with a Mad Millie Coconut Yoghurt making kit from Mighty Ape. Mad Millie is a great NZ success story, they export their cheesemaking and cider-making kits around the world. The kit includes all required ingredients and equipment; yoghurt culture, a jar, thickener and thermometer. The instructions were simple: heat two cans of coconut milk or cream to a precise temperature, mix in the cultures, cool, and let it ferment in a warm place. Ahh, small hitch. I don’t have a hot water cupboard due to innovative space-saving measures in my very small Onehunga home. The outdoor hot water cylinder is amazing but unhelpful when trying to dry wet shoes or keep coconut cream warm enough to become yoghurt. Google advises, for those without hot water cupboards, wrapping the yoghurt-filled jar in tinfoil and a towel.

My homemade version was thick and smooth like Greek yoghurt and very delicious. It was also quite sweet; the instructions suggested a tablespoon of sugar to thicken the yoghurt but next time I will go without. I will also use coconut milk instead of coconut cream to give it a lighter taste. Does mine compare to the Cook Islands classic? Well, no. Perhaps because my coconut came from a can and in the islands it came from a coconut fresh off a palm. But will I be making this again? Yes! It’s a sign of the times the way our faces are glued to screens – both necessarily for work and  relaxation. All our waking hours are spent either at computer screens or scrolling through our phones. It is rare to find a form of entertainment that doesn’t involve technology. But Cakes n Ladders, a new board game cafe in the inner city Auckland suburb of Kingsland is providing a cheap, fun activity to distract patrons from that Pikachu they are missing from Pokemon Go.

This family-run business has dusted off an extensive collection of board games and are welcoming families, groups of friends and couples to grab a coffee and a game to play. Their collection includes all the classics of the 7os-heyday of the board game era.

As a student, my Studylink weekly deposit and my part-time jobs don’t allow for much room for socialising (especially in Auckland where a glass of wine can cost $12) but for a mere $2.50 an hour Cakes n Ladders is a pretty fun way to hang-out with friends over a heated game of Yahtzee. There are also more obscure games such as Bunny Bunny Moose Moose, a Czech game where players take on the role of rabbits and moose escaping a hunter, and Power Grid, a German game in which players bid on resources to build an electricity network.

Whether a hardcore gamer or someone who rarely strays from Candy Crush, this board game cafe encourages patrons to re-live family game nights from youth and reach for a pack of cards instead of the mobile phone. 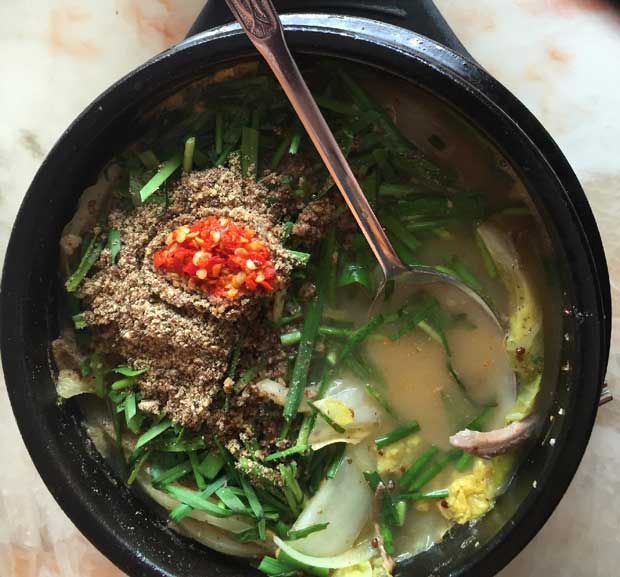 We’ve all had an unforgettable meal – some memorable for good reasons and some for bad. For my OH (other half), his great meal was a hot stone boule (bowl) dish eaten in a little Korean restaurant in Papakura more than 10 years ago and he’s been seeking to replicate that experience ever since. He even tried (with no success) to trace the chef who’d left for another restaurant in Auckland. His quest has led us to many authentic eating spots around Auckland.

There was the Korean BBQ food hall in Drury where customers walk past a blazing hot barbecue to sit at long communal tables in a big hall. The cutlery included scissors to cut the meat. This is only open a couple of days a week and bookings are required (that big hall packs out pretty fast).

There was Poong Ro in East Tamaki where we cooked meat on hot coals at our table and ate little bowls of veggies, many unidentifiable. One was so delicious I had to Google afterwards to identify it. I thought it was a kind of melon because it was so soft and tender. It turned out to be pickled daikon (radish). Absolutely delicious.

This week’s adventure was at Onggojip in Albany where my dish was a beef and cabbage soup called Beef Youngyan Tang. I had to give up about a quarter of the way through. I found it too filling yet a toddler next to me demolished his whole bowl.