This week in the water cooler: we’re saving the world in the latest superhero ensemble, Justice League  and baking with pomegranate.

JUSTICE SERVED
After a plethora of superhero movies over the past few years – Captain America: Civil War, The Avengers:Age of Ultron, Batman vs Superman, Wonder Woman, Deadpool, Logan, and only a few weeks ago, Thor: Ragnarok to name a few – you have to wonder: have we reached peak comic book movie?

Well, make room. Justice League hits cinemas this weekend, and it’s many follow-up movies amp into production. This one has Batman and Wonder Woman teaming up with three new heroes – Aquaman, The Flash and Cyborg – to save the world.

This is the DC Comics’ movie-making answer to The Avengers, but Justice League has been years in the making, and in the comic book world Justice League actually got there first.

While Batman vs Superman left fans wanting more, they are served sweet justice here following on from the success of Wonder Woman earlier this year. This film finds its feet with a tight storyline, clever dialogue and even a little humour for good measure. It’s brighter and less serious than previous DC outings. 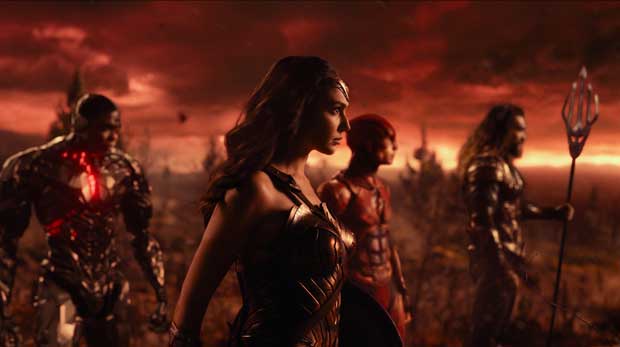 Gal Gadot’s return to screen doesn’t disappoint. Her Wonder Woman character continues to kick the proverbial and isn’t sidelined in the way Marvel female characters are.

Ben Affleck also seems more comfortable in the batsuit, playing an ageing Batman who is confronting his own shortcomings as a mere mortal human superhero. He realises that the only way to protect the world from an alien evil force is to join forces with the superhuman heroes who he once feared.

More stories you might like:
The re-wilding of Joanna Wickham: This photographer left Auckland to run a glamping business in the bush

This is fun and furious cinema that can border on silly, but it’s entertaining viewing. Ezra Miller is a stand-out as the awkwardly nerdy Flash. At this time of year, I’m like a little kid. These are my absolute favourite months because I can hang Christmas lights, warble along to Mariah Carey, and dress my greyhound up as an elf.

But much of my excitement is more summer-related: the days are longer, bluer and warmer, and there’s an influx of summer fruits. Strawberries, plums, apricots… the list goes on.

One fruit I can’t get enough of is pomegranate. It’s not a common backyard crop in NZ thanks to being more suited to the warmer climates of the Middle East and Mediterranean, but imports are becoming more available and more affordable at the local supermarket.

The little jewel-like seeds make me happy, with their sweet pop and the red-stained fingers (and tea towels, and benchtops) that come with trying to prise them from their snug home. I decorate salads with the seeds and use them as a bribe to drink more water. Being pregnant and not a natural water-drinker means my daily intake is now near-impossible without the temptation of eating the seeds bouncing around in my glass.

Now very hydrated and keen to broaden my horizons, I went in search of other pomegranate recipes and found that Buzzfeed had read my mind. Its list of 16 pomegranate recipes led me to this one for Pomegranate and Sea Salt Brownie.
I switched the cane sugar for normal sugar and used olive oil instead of coconut, and sprinkled a good dash of white and dark choc chips on top.

The texture is delicious – the sides chewy and the middle moist – and it’s an easy recipe to make but the pomegranates get a little lost. I would recommend serving with fresh seeds and some whipped cream.