This week in the water cooler: Nadene is seeing stars in Hunua, Emma has gone to the dogs (again) and Cheree goes banana (grams).

It feels like you’re in the middle of nowhere. There’s no internet connection, no cellphone coverage, no accessible power. The only phone is in a wooden box on the side of the road and it looks like a model I got from The Warehouse, circa 1992.
The neighbours are sheep, Canadian geese and paradise ducks. Possibly there’s a wild goat or four that you can’t see. Oh, and rabbits. A LOT of rabbits.

The only ones who seem to know about this secret spot are the mountain bikers, and just below where this photo was taken was a campground full of them, citronella torches burning in circles like they were in a bike riding version of Survivor.

This is your water Auckland, pouring down the hills of the Hunua Ranges and into this dam (the Upper Mangatawhiri reservoir). We were just 50 minutes from the centre of Auckland, standing on its 400m+ wide face, marvelling at the engineering that created it and wondering how many rabbits it would take to undermine it. I hasten to add, there were no signs of it being undermined!

There are 44 campgrounds in Auckland’s regional parks, but I think this one is my favourite. We’ve raved before about the online marketplace Etsy, and we’re going to do it again. There are 1.1 million online artisans and craft makers selling their goods around the world, and many small New Zealand businesses have found their niche selling specialist products to a global market.

It doesn’t get more niche than dog clothes – that’s right, clothes for dogs – but Auckland dentist Laura Barwood has founded a little creative side business called Dogs of Desire on Etsy. It started as a way to raise money for two disabled griffons called Pebbles and Dewey who needed extensive (and expensive) surgeries.

“I started out making crocheted jerseys for my own dogs and increased what I was doing to meet demand,” says Laura. “I taught myself to sew when I wanted to make my own babes (griffons, Pica and Ludo) a bed out of an old bedspread and almost destroyed my mum’s sewing machine in the process. I never really intended Dogs of Desire to be a business, it’s just grown organically which is nice.”

Laura fundraised/paid for both Pebbles and Dewy’s surgeries, which ended up being close to $10,000 for each dog, using funds generated from her Etsy store and her own website. 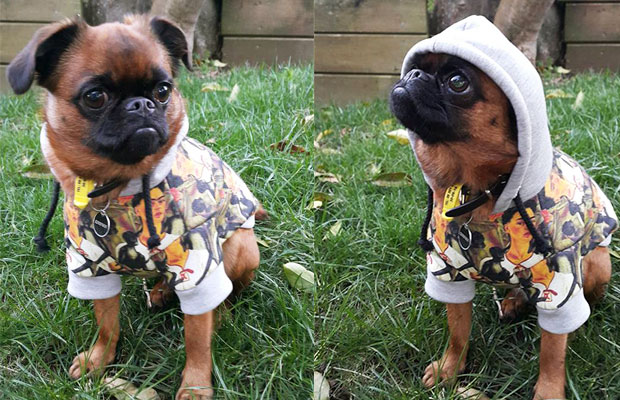 My own dog Frida has a Dogs of Desire hoodie with custom Frida Kahlo print that she wears in solidarity because yes, I’m a crazy dog owner, but in my defence she only wears it on special occasions.

Today, both Pebbles and Dewy are well and happy, and Dogs of Desire now supports the animal rescue charity Hurrah. Laura ships her dog beds and clothes around the world. New Zealanders wanting to support local can filter their search to New Zealand-based stores only and find other Kiwi traders such as perfume company Pacific Perfumes, retro hair accessories from Madewithlovenz and children’s toy makers Needle & Nail.

IT’S ALL FUN AND GAMES

I’ve always been a big fan of boardgames, and I’ve had plenty of time over the Christmas holidays and recent long weekends to try out a few new ones.

Top of the list is Bananagrams. Players select letter tiles from the middle and race to build individual crosswords which sounds simple, but it is brilliant fun. Watch out for players trying to use proper nouns and abbreviations – it pays to have Google on standby for people trying to sneak in illegal words.

The fruit-themed game has won several Toy of the Year accolades, and the best bit is it comes in a small banana-shaped pouch, so is the perfect timewaster for those on the move.

The other game that had us in stitches was the app ‘Heads Up’. It’s basically charades, but was created by Ellen Degeneres and is often played on her talk show Ellen. One player holds the phone to their forehead and must guess what is shown on the screen by the other players acting it out. Whoever can guess the most in a minute wins. There are heaps of different categories, such as music, movies, famous people and animals, so it never gets old. Download from the App Store or Google Play for around $1.79.

Be warned, the phone does video the entire game and no-one looks good stomping around the living room pretending to be an elephant.

A DATE LOAF WITH DESTINY In January I went to visit a friend in Kerikeri. She introduced me and three girlfriends to Mahinepua Bay, a lovely beach with a walk out to the Omiru Trig, a great way to spend a couple of hours.

More stories you might like:
Getting lost in clay: Why the slow, mindful art of pottery is the new ‘it’ hobby

Our walk was enhanced by the date loaf that our dear friend brought along to keep our energy levels up. It’s a really easy recipe, has no refined sugar, and I’m told it freezes well (but it never lasts long enough to test this). I think it is going to be a staple for taking out fishing from now on.

I made this while we were staying at our bach, but I only had two cups of almond meal so I crushed up some whole almonds to make up the volume and it added to the texture of the loaf.

METHOD
Preheat the oven to 160˚C. Place all the ingredients except the almonds and the extra dried fruit in a food processor and blend until smooth. Place the almond meal and dried fruit in a large bowl and add the blended ingredients. Mix well. Spoon into a loaf tin and bake for 40-45 minutes. My commute from West Auckland each day is a long drive, but there are two things that make me smile as I make my way along my country road each morning. First, I drive past a fence full of gumboots. I don’t know the story behind this, but I have to imagine it was created by someone with a sense of humour. 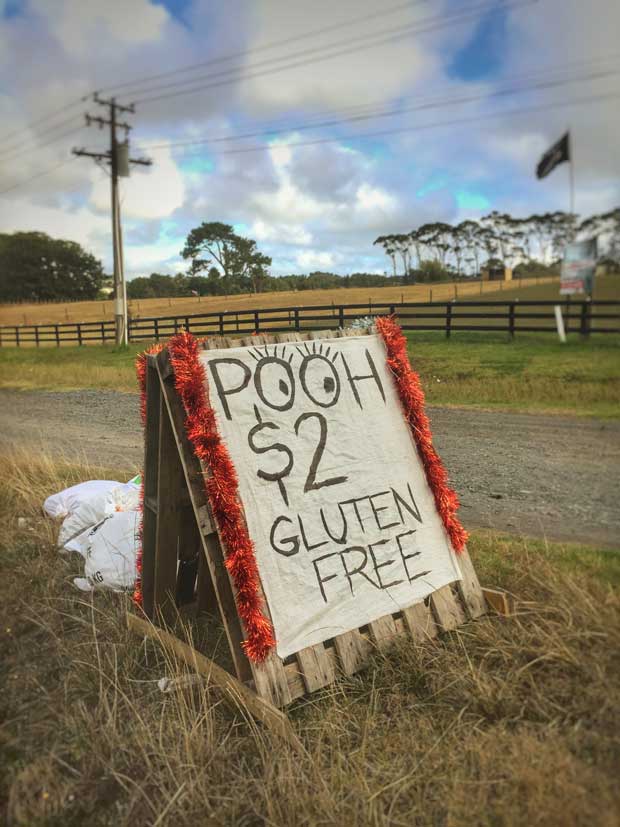 Further up the road there’s the gluten-free horse poo stand that always makes me chuckle. I sincerely hope that no-one will put this gluten-free poo to the taste test.