To cement their partnership, Antonia de Vere and Mark Seeney got married. Now they combine their talents in one very creative business, Mark Antonia.

Space – the final frontier, according to the Starship Enterprise, and for Antonia De Vere and Mark Seeney space, frontiers, enterprise and stars (in their eyes) have dictated how far they have come. Space in particular has defined them; physical space mostly, not the grandiose cosmos, although sometimes it is allegoric. From the sofa in their lounge it is possible to see into every room in their tiny apartment. From the sofa it is also possible to look into their faces and see every metaphorical room in their big ambitions. This is not to say that they have some imperious plans for world domination but they can see no reason why they will not do bigger and better. They have already more than doubled their business by moving it out of the 70-square-metre apartment and into a nearby 170-square-metre warehouse, thereby ticking off the need for extra space, and it was by pushing frontiers and hard enterprise that they are where they sit now. 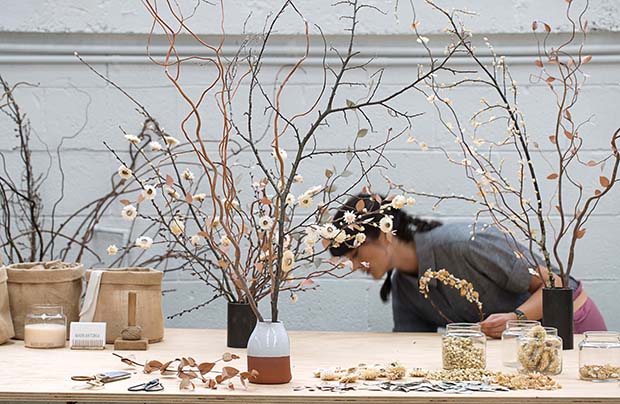 Antonia always knew she wanted to have her own business although it took a little while to determine what it would be. She started with fashion design before moving to jewellery design. She loved her course but hated the pieces she turned out – although her mother treasured her efforts and has kept them all. But Antonia was a little more diffident; in the current vernacular a little “yeah, nah” or even the smaller and more succinct “meh”. 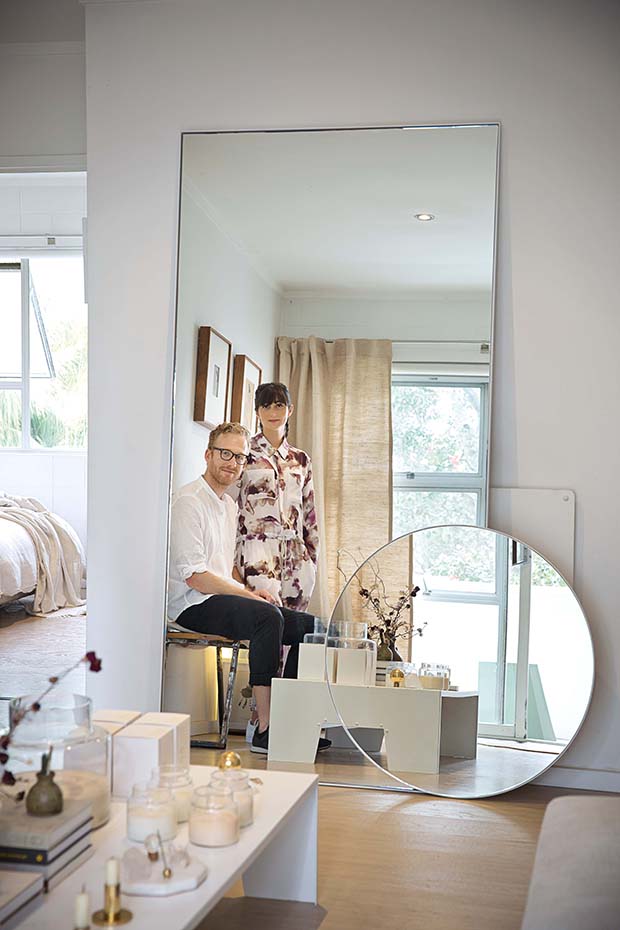 The most successful aspect of her foray into that discipline was something she found in the workshop – her husband-to-be Mark Seeney, who was studying furniture design. In this discipline Mark believed he had found his true calling, although just to be sure he went on to also study architecture but it was furniture he came back to in the end, in particular to chairs. He also wanted to be his own boss but wasn’t yet sure how early in his career he might achieve that desire. But he was about to be pleasantly surprised because while he was tidying up the loose ends in regards to just what his ambition was, Antonia discovered floristry and it was here, with some aromatherapy on the side, that she found her groove and there was plenty of room alongside for Mark. 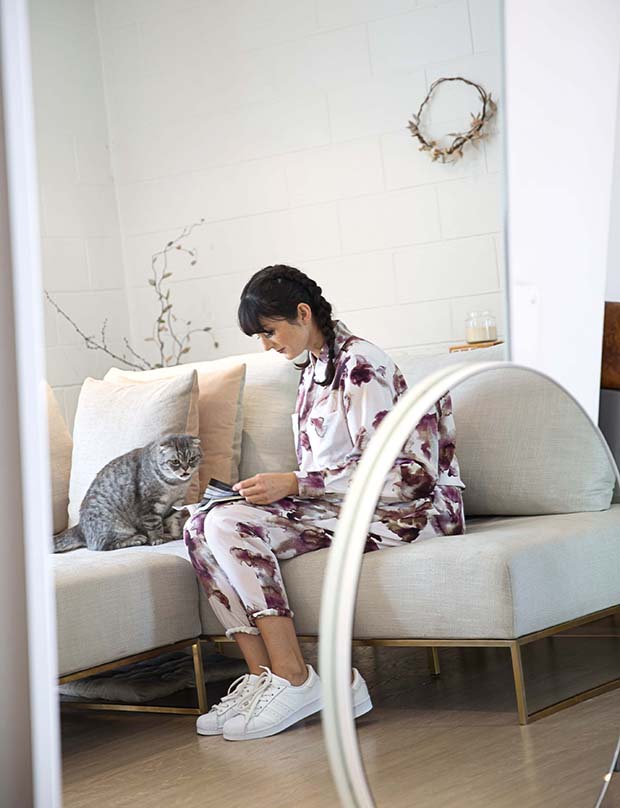 Mark’s other great love is making mirrors, the bigger the better.

To consolidate their officially realized callings they married and moved into the 70-square-metre apartment with about 0.504 square metres of cat; two scottish folds called Louis and William although William quite forgot to fold and therefore does not look as worried as his brother. 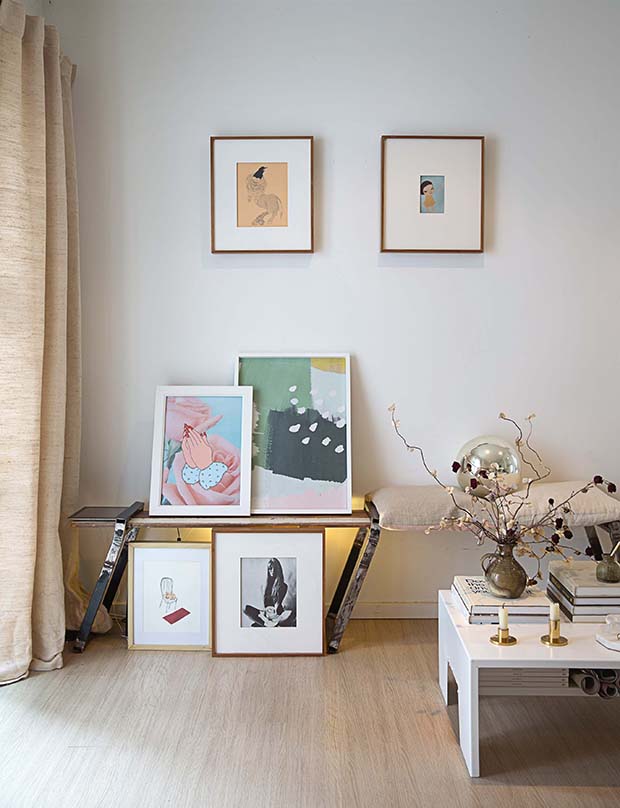 They set up business in their spare room. Mark only needed his laptop and somewhere to sit – sit being the operative word because it is still chairs that are his favourite thing to design, and Antonia took up the rest of the space with her flowers. Both are extraordinarily neat and tidy and while others in such a situation may have found themselves regularly lost under a pile of petals, florist’s wire, foam and tape, along with a tangle of computer leads and cables, Mark Antonia – as they have become – do not understand the concept of clutter, which is extraordinary given that most creatives drag some sort of chaos behind them like a baleful wraith. 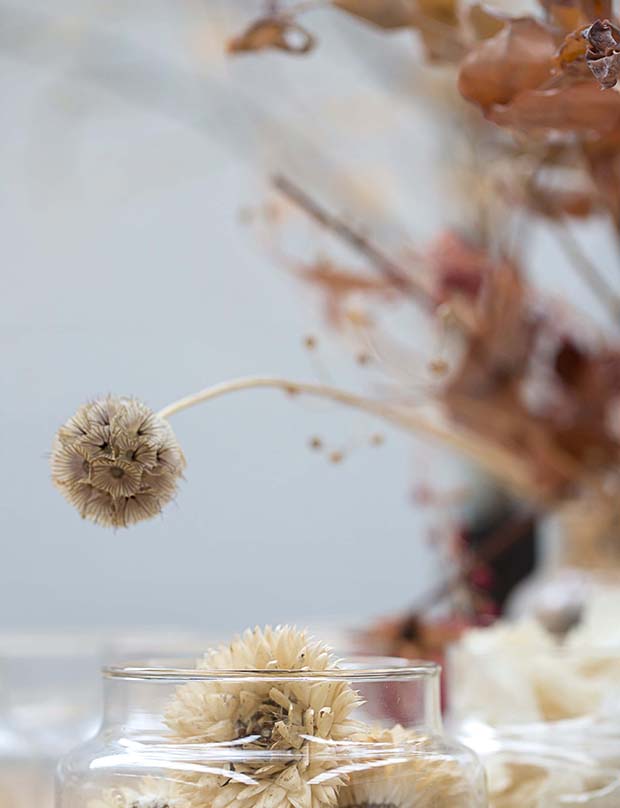 Antonia loved her flower business. She loved what flowers stood for – their perfume, their beauty and that the bouquets were mostly about celebrating special and exciting occasions, such as weddings. What she increasingly didn’t like was the aftermath of a wedding when the flowers were abandoned and withered and died. The dying seemed ominous somehow, ill-omened and above all wasteful. So she started to collect them up and dry them, hanging them around the walls of the office and filling the flat with their salvaged perfume. She offered the dried keepsakes back to the brides who had chosen them and fell headfirst into floristry with a difference, a two-dimensional proposal that meant her talents were recognized long after an event because her arrangements would last forever if carefully looked after.

In her fashion retail days, Antonia had made some good and fashionable connections and her floral arrangements, particularly the dried ones with their long shelf life, became and remain popular in the windows and galleries of such noted boutiques such as Lonely, Fabric, Juliette Hogan and Crane Brothers, as well as home décor stores like Everyday Needs. 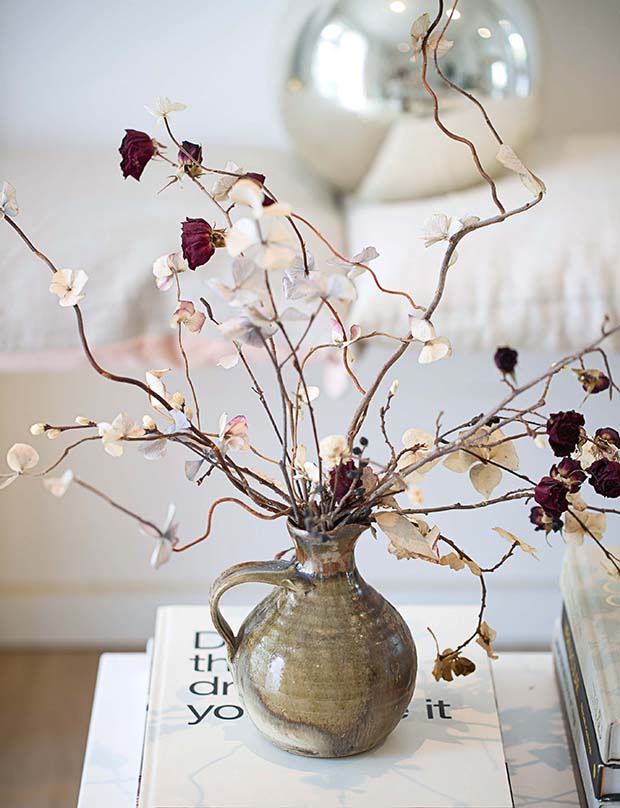 Others may be astonished but somehow Antonia and Mark were not at all surprised at the synergy between flowers and furniture design, it seemed inevitable somehow. It is so easily a Mark-designed clothes rack or table that frames or holds an Antonia-constructed floral display in the same store. Mark has learned not to jump out of his skin when Antonia screeches stop. Some flower, leaf or stem will have caught her eye and she must have it. Her handbag, car and the van all carry a pair of secateurs

They had to abandon their spare room for the within-walking-distance warehouse when Antonia was commissioned to do an enormous dried wreathe for the window of a boutique. Even if she could squeeze around it in the making, she would never have got it out of the door. So now they have back the room where it all started and think it may be a library. 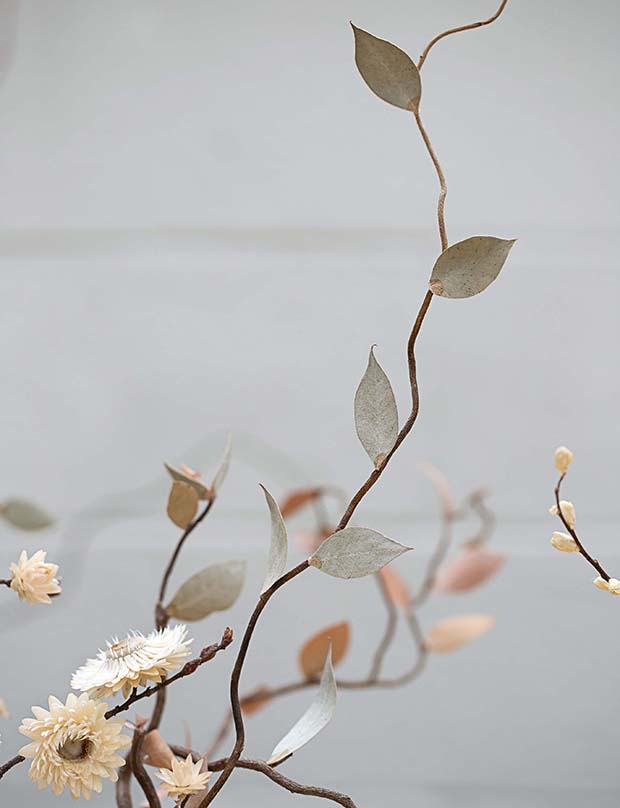 The ikebana-like aspects of some of Antonia’s creations are not so very different from designing chairs, which have an ikebana-like balance of their own. Mark learns as much from Antonia’s work as she does from his.

They have the books, having given up on television, but somehow Mark’s talents haven’t quite made it to his own house and the shelves remain undesigned and unbuilt, a situational irony that is not lost on the pair and is amusingly reviewed. It is no surprise that the pile of books grows in pace with their success and until they can wrangle a few more hours in their busy days, the book tower will continue to teeter.