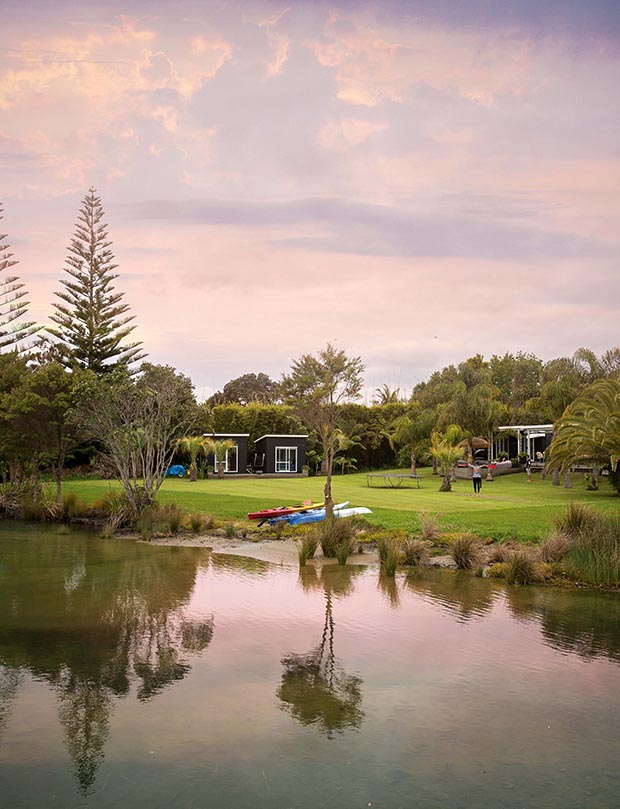 The sun sets over the Omaha River and Wendy and Richard Hart’s waterside property, where two relocatable Go Homes have recently been joined by a tiny pair of cabins that offer extra sleeping space for long summer holidays.

With roots too deep to easily move, the Hart family found a temporary fix – two transportable cabins beside the estuary at Point Wells – that is now etched into their holiday history.

A trampoline raft; sack races on the lawn; cocktails sipped under a cerulean sky. These are the snapshots that have made it into the photo album at Wendy and Richard Hart’s holiday home in Point Wells. But beneath these fun-in-the-sun glimpses runs a deeper connection.

Wendy’s family has been part of this tranquil waterside settlement for more than 60 years. “My mum was 10 when my grandparents discovered Point Wells,” she says. “My grandmother would collect her and her siblings from school on Friday afternoons and head downtown to catch the car ferry to Birkenhead. Then they’d head up north.” The journey on dusty gravel roads took about three hours. 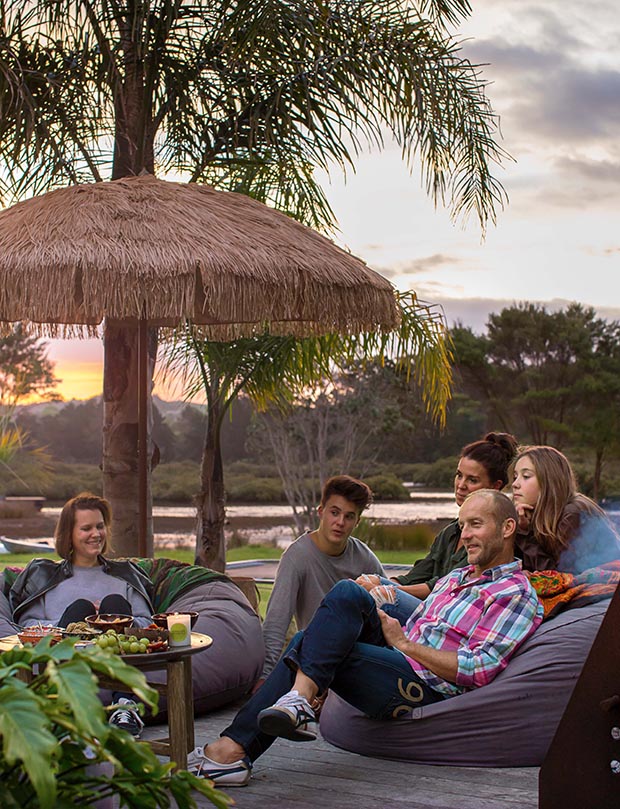 These early roots were strengthened when Wendy’s aunt Beverley met her husband, Joe Chitty, at a dance held in the local hall and moved to the sleepy settlement permanently. The area, now just a 70-minute drive north of Auckland, takes its name from the farmer who, in 1947, sub-divided his land into quarter-acre sections and sold them at 50 pounds a pop. 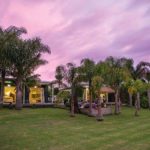 A grove of established queen palms ties the living wing and bedroom cabin together and is a good start on a future established garden for when the Harts build their permanent home here. 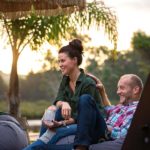 Wendy and Richard on the deck, where rum-based cocktails get the summer party started. 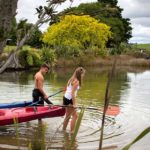 Tom and Billie head off for an evening paddle.

Not a bad price for the Kiwi dream. These days, the small community is growing, but it remains close-knit and active.

There are monthly pot-luck dinners, a general store with worth-the-wait fish and chip suppers, a boating club with fiercely fought fishing competitions, and a newsletter that keeps everyone in the loop. Little wonder there was an outcry when last year the witch’s hat merry-go-round and lullaby swing, part of the playground since the mid-1940s, were deemed unsafe and removed by the council. Wendy’s mum spent many unhurried hours on that historic swing at the park overlooking Whangateau Harbour. 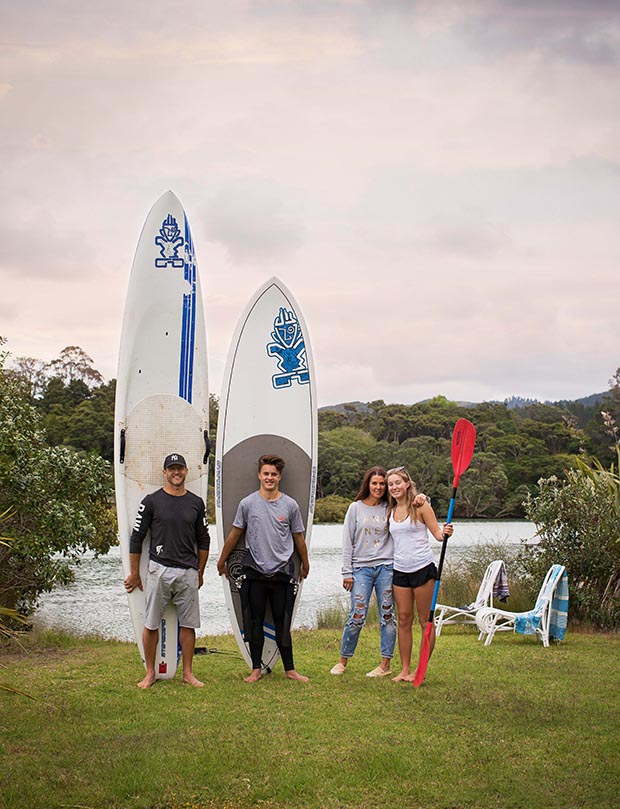 Richard’s preferred fitness activities involve plenty of water. Luckily, the whole family enjoy sports like paddling too. They organize an annual raft race from the boat ramp to their front lawn, which has become a well-loved event among their friends.

A spiderweb of threads ties Wendy to this land and so, when the Harts first secured their own place here, it was like a reclamation. In 2001, they bought the board-and-batten bungalow where once Joe had shaped his creations in the garage. “As soon as we saw it come on the market, we thought we couldn’t afford not to,” says Wendy. The black cottage came with a flat grassy paddock that stretched to the water. Seven years later, when finances were tight, and the cottage became too expensive to maintain, the couple subdivided, sold the house and retained one of the sections.

More stories you might like:
Thinking outside the box in a 60sqm container house (in cherry orchard) 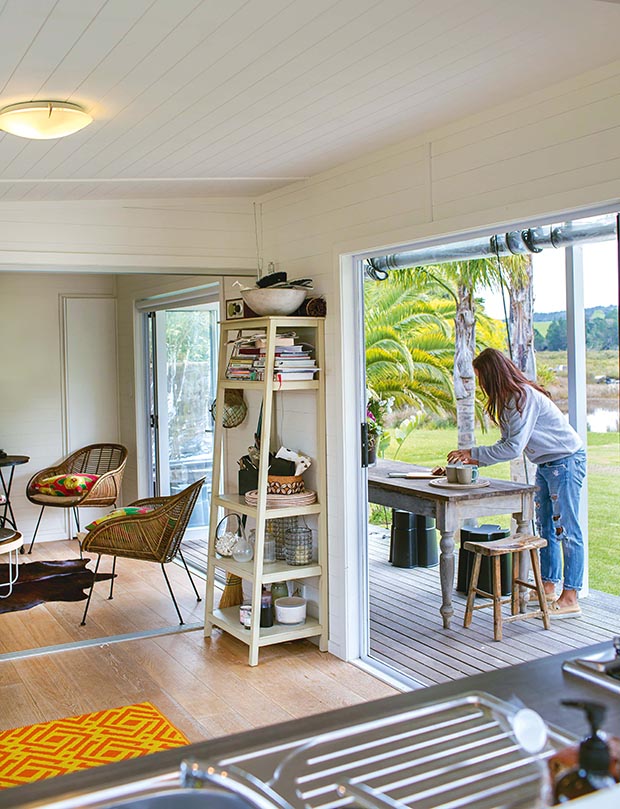 Instead of building, they looked around for an inexpensive, temporary solution that could accommodate them and their children – Thomas (17), Billie (16) and Wendy’s eldest son Brook (27).

They found the answer in a Silverdale yard – a pair of relocatable “Go Homes” with flip-up decks that looked fit for the task. “The company was owned by a surfer-builder guy called Kelvin who sold us on his personality,” admits Richard. The cabins’ casual aesthetic matched the laid-back riverside mood of the site, which looked across mangroves to Whangateau. Mono-pitch roofs, generous sliding doors and the classic combination of black “aluminium” weatherboards offset with white joinery captured their imagination. The $100,000 price made the decision easy.

Getting the two eight-by-four-metre buildings onsite was less of a breeze. A narrow driveway entrance had to be negotiated. “I was too nervous to be here on the day they were trucked in, so I left that to Richard,” admits Wendy. (Remembering the angst involved, Richard insists that when the couple does eventually build permanently on the site, the cabins will be removed “by barge or dynamite”.) 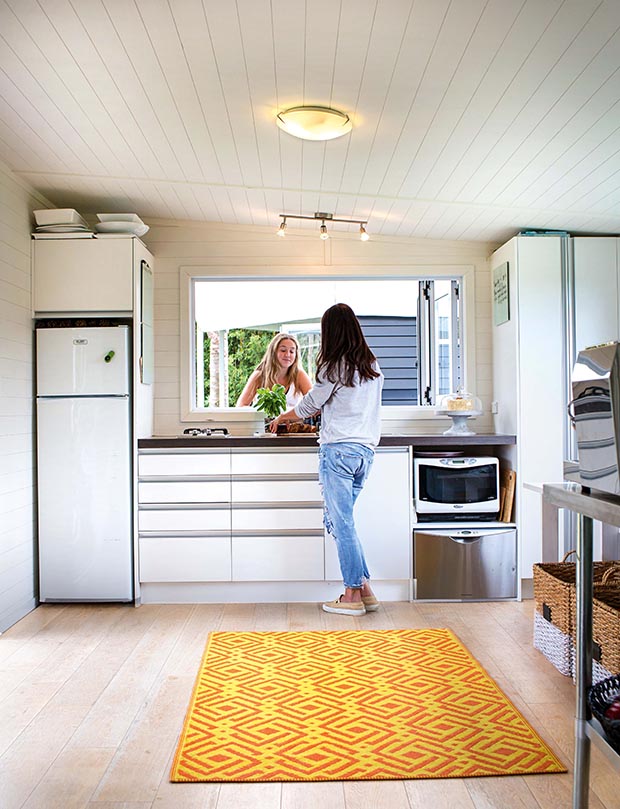 Nevertheless, the nail-biting experience was the start of a love affair that lasted longer than expected. The cabins, one kitted out with a galley kitchen, living area and en suite, the other with two separate bedrooms (and another en suite), are still in service after 10 years. “They’re really well made and thought out,” says Wendy. And they’ve weathered the knocks of boisterous family living.

“I’m not too precious about them. When we leave, I just sweep the floor and lock the door.” Once they were hooked up to the power and tank water, Richard built a central deck – dubbed the “sundowner lounge” – which joins the duo, and recently, two more tiny sleepouts were added to provide extra bed space. 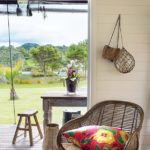 Bright cushions team up with fishing buoys and basketware to accessorize the main cabin. The two sets of bunk beds in the teen bedroom were a more recent purchase and took a whole day to assemble. 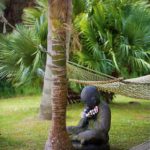 Wendy, a florist who has owned the Parnell store Flowers After Hours for 23 years, has decorated the holiday huts simply in “island” style. “I love colours and textures but as far as furniture goes, there’s not a lot of space so if it doesn’t work well, we can’t have it.” A wide cane couch doubles as another bed and beamy storage baskets hold provisions that don’t need to be refrigerated.

It seems improbable that from the tiny kitchen and the barbecue emerge feasts of mammoth proportion. Snapper hauled in from the waters “not far away” (exactly where is a local secret) are prepared many ways: pan-fried fillets, smoked whole on the barbecue, made into fish cakes, curry or burgers. “One week I fed the kids for a whole week on fish without them even realizing,” laughs Wendy. 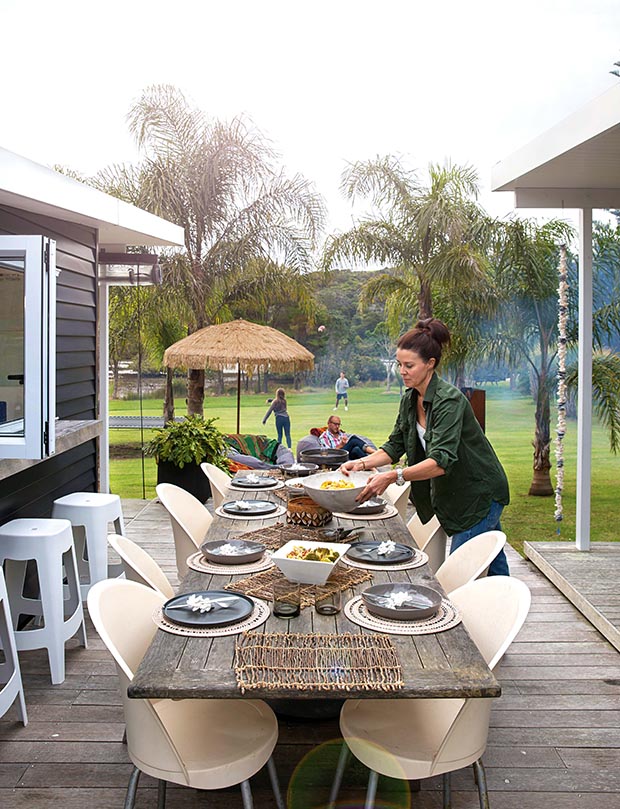 Wendy sets the table on the central deck for lunch. “It’s where we always congregate to eat; I had to find a narrow table as there’s not much room.” The bulletproof chairs are about 15 years old.

Sociable to a fault, the family often entertains up to 20 people at a time. In this easy-going enclave, visitors arrive unannounced bearing the catch of the day or offerings from the garden, and spill out onto bean bags, sprawl across the grass, or gather at the long table beneath the trees.

The annual “inflatable” raft race, organized by the Harts, is a much-anticipated event. “We leave from the village boat ramp and end up on our front lawn,” says Wendy. So begins another day of “fun, love and craziness”, with party games, exaggerated fishing tales and lots of laughter as Richard serves his famous rum cocktails from a makeshift Hawaiian-style bar. Just last year, Wendy’s aunt Beverley moved out of her home of 45 years, which is just next door to this property. She has left a living legacy. Two Norfolk pines that tower into the sky have special significance. “My aunt planted them for her two daughters as Christmas trees 40-odd years ago,” explains Wendy. 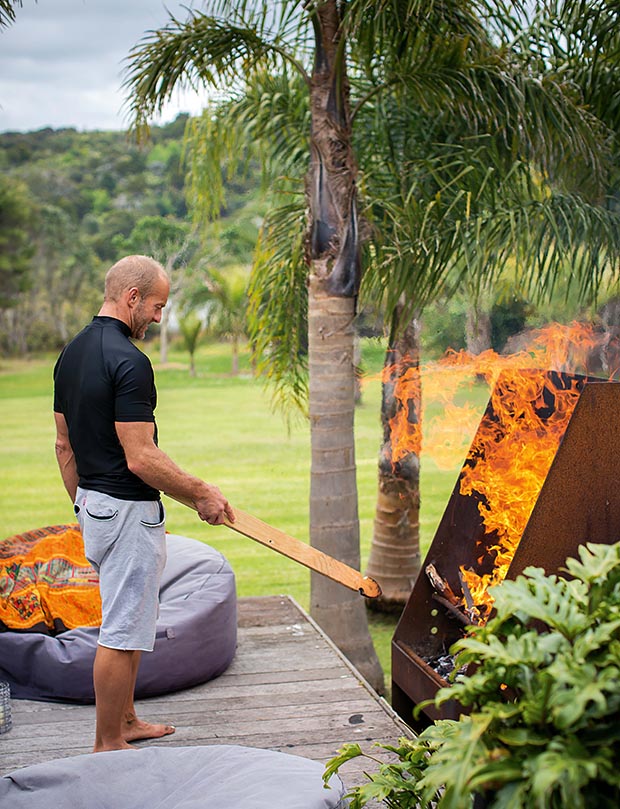 The baton has passed to the next generation. With limited wi-fi, Thomas and Billie, who have practically grown up here, have been forced to emulate a childhood past where face-to-face connectivity reigns. They’ll jump off wharf poles, paddle out to catch kawahai for kokoda or haul out the Yahtzee dice when the weather doesn’t play ball.

On the wall of the living room cabin, black-and-white photographs that once belonged to Wendy’s grandma show Point Wells in a sleepier time. Things are changing in the area, but there are still no footpaths and the sky at night remains a dome of stars.

“We are very lucky that my grandparents found such a special spot,” says Wendy. “Most people who come here don’t leave.” TIPS FOR MOVEABLE HOMES
✻ Carefully consider access to the section. How will the home get to the site?
✻ What is the back-up support from the company that is transporting the cabins? Is there any insurance cover should something go wrong?
✻ Budget for consents, creating infrastructure (is there storm water drainage for instance?), piles, hooking up to the services, landscaping (including access) and finishing touches. 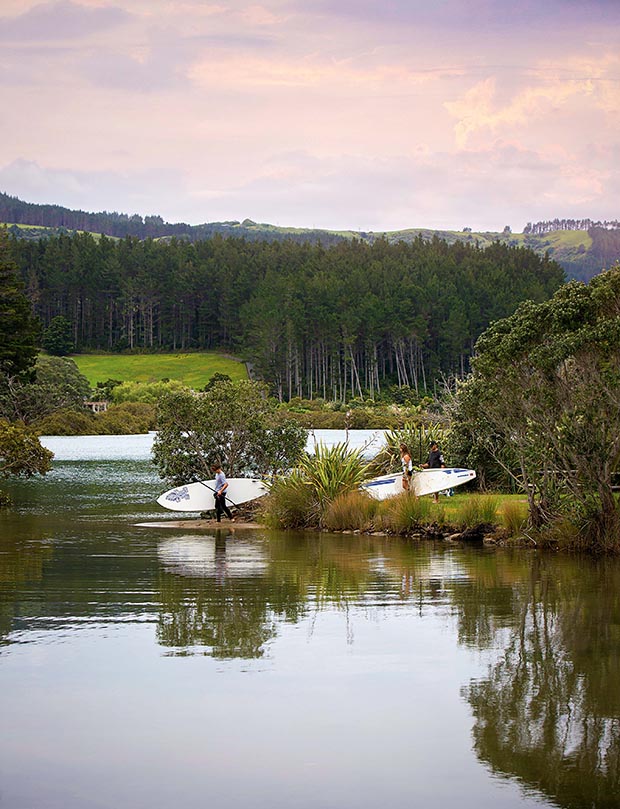 ✻ Look for quality materials that will last. Timber veneer floors, bulletproof cladding and cedar decking are a good start. Ask what the guarantee is.
✻ Getting a home loan will be more difficult since banks lend only on the land until services are hooked up and a compliance certificate is issued, so how will the transportable be financed?

BUSINESS IS BOOMING
Wendy, an accomplished florist, has not only run a successful store (Flowers After Hours) for two decades but also consults to grand royal events in the United Arab Emirates, Saudi Arabia and Qatar. About three times a year, she’ll join her friend Abbey Dean, creative director of Bliss Flower Boutique in Dubai, to help direct the team preparing for glamorous pre-wedding parties. Wendy has owned Flowers After Hours for 23 years now. “It’s an institution,” she says of the seven-day business where the enterprising point of difference is that it stays open until 8pm Monday to Saturday.

“They can have up to 3000 guests and there are no men invited,” explains Wendy. “The women take off their burkas and put on their Dior outfits and jewels. Flowers are flown in by jumbo jet from Holland, and we’ll be working 12-hour days. It really is another world.”

Back home, Wendy’s mum and dad are also involved in the industry. Wendy’s mum Mollie now grows flowers on a lifestyle property in Mauku, south Auckland; mainly bells of ireland, sunflowers, hydrangea and hypericum for export. 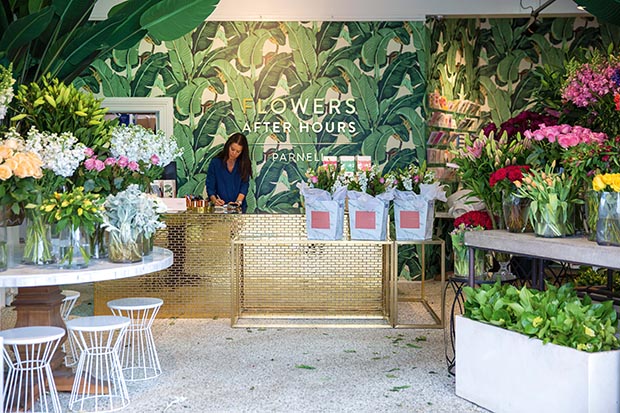 When Wendy gets away to the bach, she leaves the floral world behind her. “I might have a lovely potted orchid, but that’s it.”

What we’ll be eating: “There is no oven at the bach so we use the covered barbecue a lot. Brook even makes focaccia in it.”
What we’ll be drinking: “We visited France a couple of years ago and became hooked on French rosé, which is so lovely and light (any organic, Provence-based variety is best). Richard’s speciality is a cocktail made with Stolen rum, ginger beer and lime juice. Another refreshing drink teams gin with East Imperial Grapefruit Tonic.”
The games we’ll play: “Yahtzee – it goes everywhere with us.”
The music we’ll listen to: “Our bach playlist seems to be getting younger and younger as our teenage children take over. But some old favourites include Fleetwood Mac, Tom Petty and Dire Straits.”
A summer thriller: “Richard’s favourite is I Am Pilgrim by Terry Hayes.”