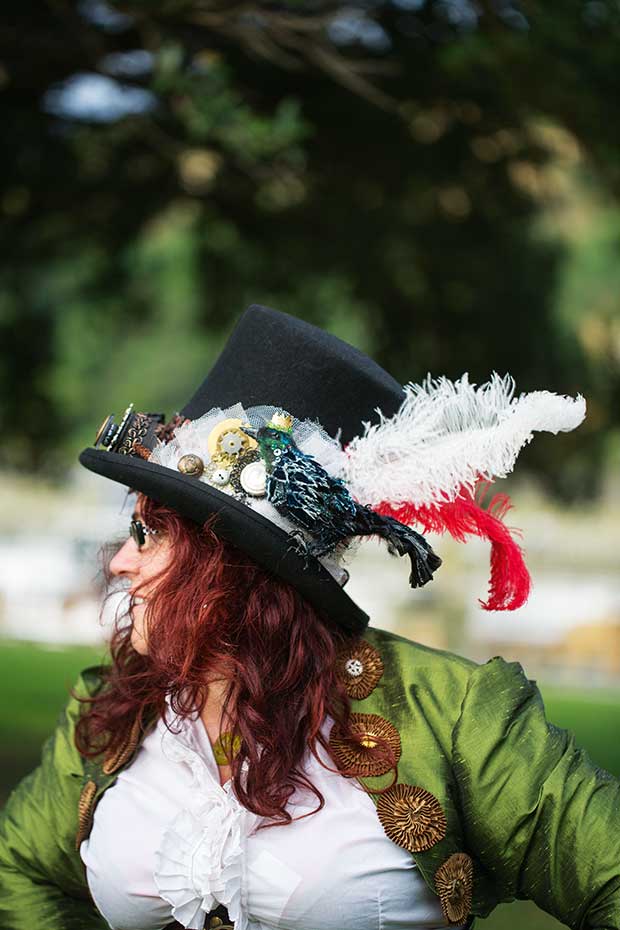 A special occasion requires a special hat – and a tui must have a crown. For the Oamaru Steampunk Gala Ball, Lizzette chose a tall top hat glammed up with ostrich feathers, buttons, baubles and a royal bird with silver-tipped wings.

When you occupy a world in which fantasy and reality converge, where life-size and miniature models co-exist, you need an artful attitude – and a kickass outfit or two.

It’s hard to tell where the art ends and the artist begins on a visit to Lizzette Britton’s studio. While a green leather boot with satin ribbon lace-ups and high copper heels would not be out of place on display in a gallery, here it is crossed neatly over the artist’s knee; beneath her floral skirt, a row of papier-mâché fish is woven into her petticoats.

‘Oh, darling, let’s be adventurers,’ reads a blackboard at the entrance to Glue Pots and Lemon Drops, a converted railway cottage on the outskirts of Whanganui, hidden behind a high gate and a curtain of ferns. Another reads, ‘Entrée des artistes’. 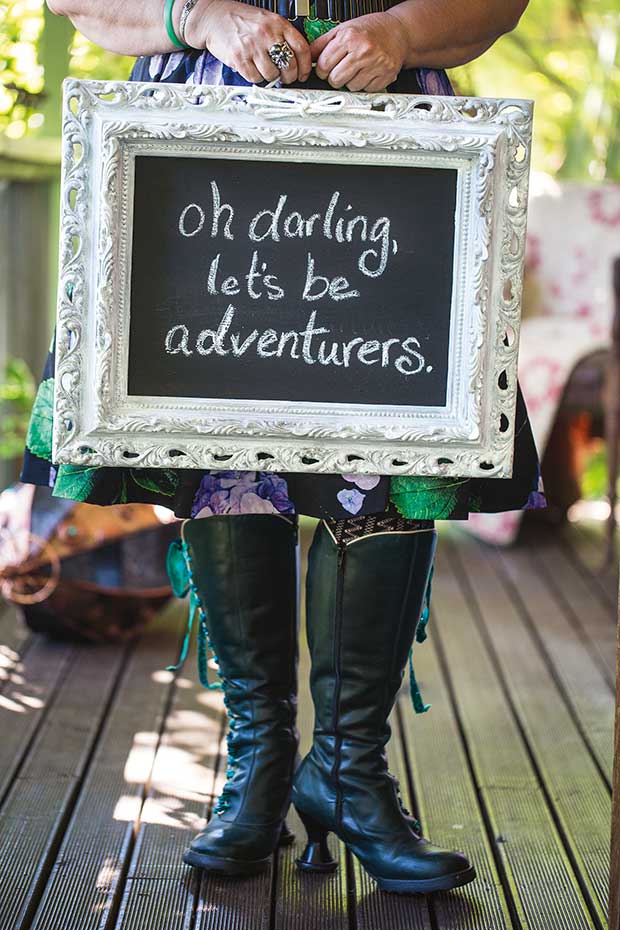 These boots aren’t made for walking. They’re Fluevogs, dear.

“So, you found me alright,” Lizzette calls from the balcony, where she sits framed by flower pots and bright-coloured bunting. “Some people have trouble.”

A smiling court jester points the way up the stairs. Apart from the eye-boggling boots and two vintage caravans beside the gate, there is nothing to suggest she is anything other than a person with a passion for camping and fancy footwear. But, like the fish hiding in her underskirts, there is more to this woman than immediately meets the eye. 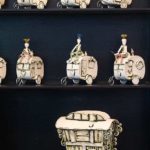 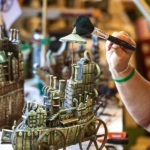 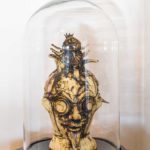 But her love of caravans extends beyond her studio. She has two vintage models which she takes on camping holidays: a 1963 Starliner Starlette that featured in the Hellers sausage ad, bought five years ago for $5000 and named ‘Penelope Pitstop’; and ‘Clara the Clockwork Caravan’, a 1957 Auckland Caravan Company model, purchased from a friend in 2015 for $500. 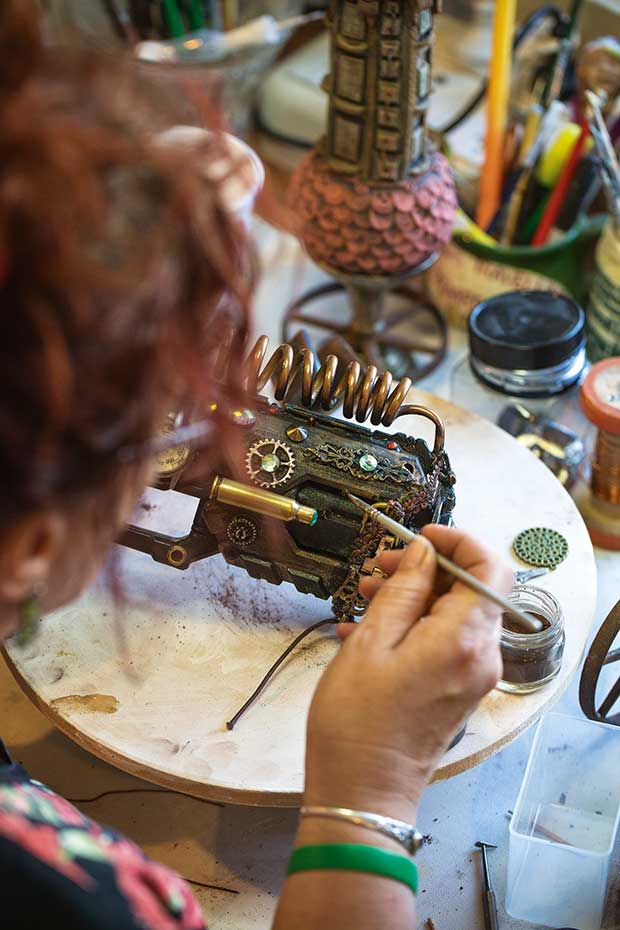 In her studio, steampunk heads and carriages rub shoulders with Lilliputian caravans that symbolize Lizzette’s lust for gypsy living.

To tow them, she has a 1961 Holden Standard named ‘Ellen’, painted white to match Penelope. “Ellen’s my favourite,” she confesses. She often takes her on holiday to Kai Iwi beach, just down the road.

Her caravan sculptures have a nostalgic charm, but their companion pieces are equally arresting. Beside her personal collection of retro items (including a jukebox, vintage scales, old binoculars and an antique cash register), are two life-size bronze rats strung up by their tails, smaller rodents riding Vespa motorcycles, a skull vase, rings with octopus tentacles and a teapot rocking on a stormy sea. 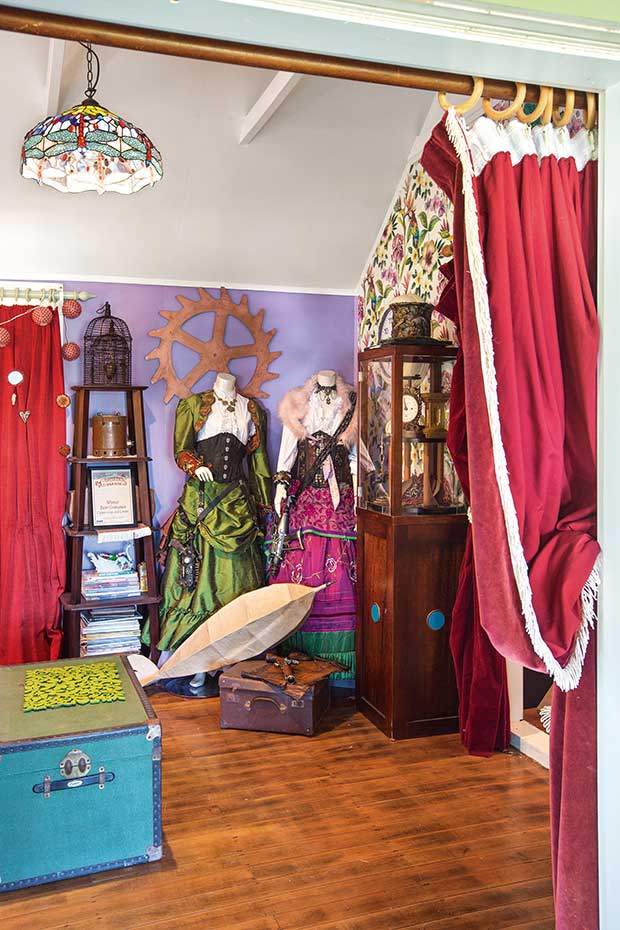 If time machines existed, Lizzette would head to the 19th century, when bustles and corsets were the fashion.

Two costumes are displayed on models: one a green satin gown with a leather corset adorned with bullets and coiled wire; the other a prim white blouse, pink feather boa and a futuristic weapon looped around the model’s belt.

“Meet Aria, the Assassin, and Lady Penelope, the Spy,” says Lizzette in explanation. This is where the worlds of fantasy and real life come together. Friend and fellow steam punker Bronwyn Hughes, helps lace a leather corset to get the show on the road.

The trajectory of an artist’s life is rarely conventional, and so it was with Lizzette. She left her home in Tauranga at 17, returned some years later with three children, went to pottery night classes with her mum, liked the feel of the clay between her fingers and thought about buying a home. It could have ended there. But then she saw a house bus.

The eight-tonne bus needed TLC, plus Lizzette couldn’t drive. But imagination and wanderlust are potent drugs. “I just thought, ‘No problem, my brother can shift it if I need to move.’” Ellen and Penelope (aka the car and caravan) and Lizzette, often head out for a holiday at the beach just 12 minutes’ drive away.

As part-payment for the bus, she traded in her overlocker and a television. She named it ‘Zenith’ after the highest point in the celestial sphere. For five years, she and the children lived the life of gypsies, trekking between fairs, the children studying by correspondence.

Lizzette refurbished the bus interior, adding windows in irregular shapes, stylish soft furnishings and a kitchen bench built from a large slab of macrocarpa. On the side, she made mythical castles and dragons from clay to sell at fairs. “I’ve always liked making things out of nothing,”she says. 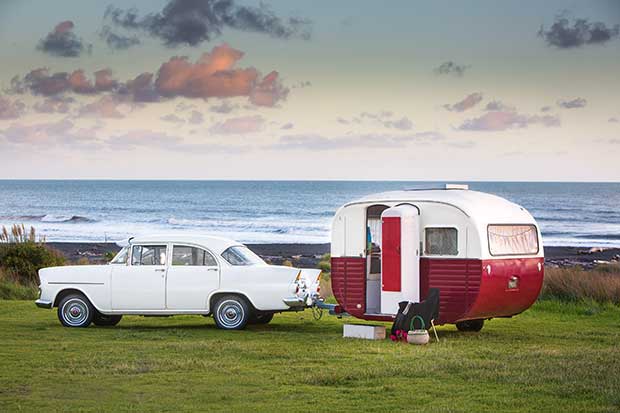 Penelope is Lizette’s escape hatch where she goes to think and dream up new ideas.

Friends urged her to settle down and get a state house and she did sell the house bus – but only so she could replace it with a double-decker that had a rusted top floor. “It was just like the one in Summer Holiday [a 1960s musical featuring Cliff Richard],” she says by way of explanation.

More stories you might like:
Lord of the Rings star John Rhys-Davies says New Zealand show Fresh Eggs is a hoot

Later she moved to Mangaweka, a North Island town with a charming main street, a replica of a DC3 aircraft and fewer than 200 residents, many of them artists. She bought and lived in the buildings of an old movie set, and spent the winters keeping warm by working at her kiln. 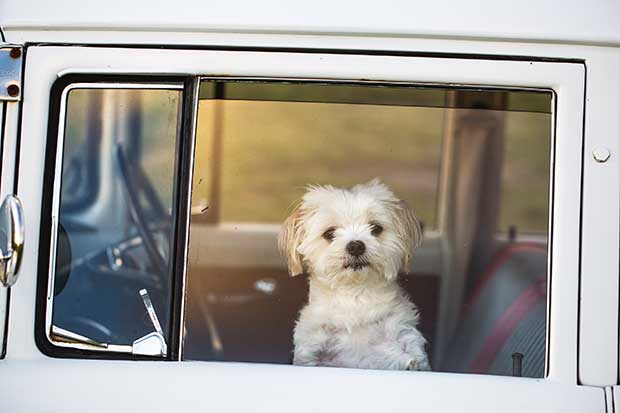 Archie is one of three maltese in the family and loves heading on the road with Lizzette.

Again, the story could have ended there, but she met John – her second husband who lives in Whanganui and owns a house-removal company. In his yard, she unearthed the railway cottage that became her workplace and studio, and where she stores items found in op shops on her travels. “John keeps mentioning the word ‘hoarding’,” she says, “but if it’s interesting stuff, it’s not hoarding, is it?”

Part of that “interesting stuff” relates to Aria (the Assassin) and Lady Penelope (the Spy) – Lizzette’s alternative personae, who appear at steampunk events countrywide. For the uninitiated, steampunk is a world in which Victorian fashion and futuristic inventions merge through ornate costumes. 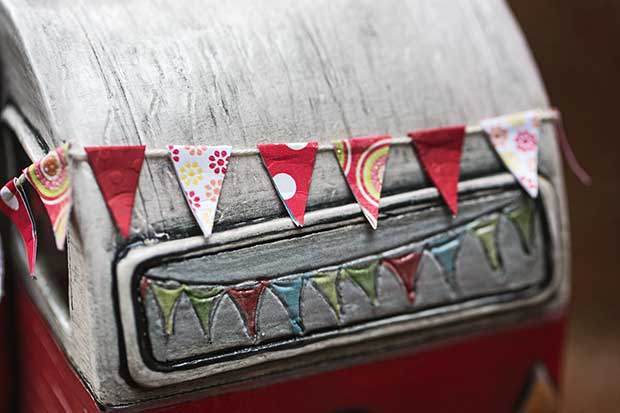 Tiny flags, tiny caravans, tiny wolves on Vespas and a tiny dog named Archie are part of a world that spans reality and possibility.

Lizzette sees steampunk as an extension of her art and love of freewheeling. “It’s a natural progression from the gypsy fair. It’s also about having fun.” Some of her recent projects include turning a child’s Nerf gun, salt and pepper shakers, an old watch, and delicate diamantes into a lethal futuristic combat weapon.

A top hat has been trimmed with brass bullets, a bowler with copper coils and loops. Steampunk costumes are based on characters that appeal to the individuals who create them. “As Ariana the Assassin, I can take care of all the people I don’t like,” Lizzette says, then adds, “which, of course, is very few.”

More stories you might like:
Into the woods: An architect puts her lessons to practice with a hut overlooking the Whanganui River 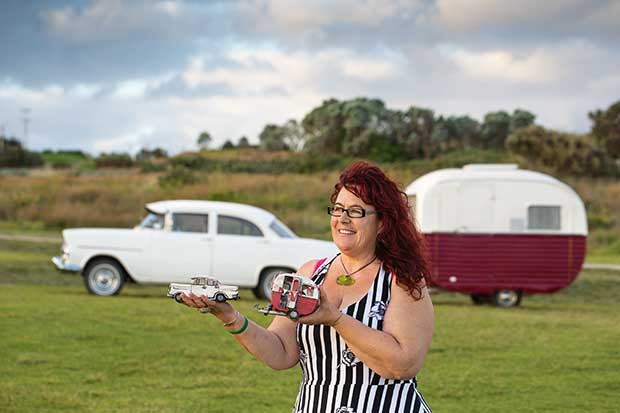 Her choice of regalia depends on the event, which may include music, vaudeville, dancing or even teapot racing, and she’s always on the lookout for items that could become part of a costume. For one parade, she built a magnificent Victorian pram using parts gathered from op shops tethered to a dirigible (the Victorians invented airships), with a built-in chiller “because it gets really hot walking in costume”. “My husband will sometimes drive out to visit me there for a cup of tea,” she says.

Her daughter, son-in-law and grandchildren have become involved in her passion, but not John. “He understands how much I love it, but he isn’t into it. He doesn’t even have a hat.” This year, she bought the Wellington Clockwork Steampunk Emporium – a shop that sells clothing and accessories – which she will take on the road in a caravan, of course.

So, what about those boots? “Fluevogs,” she says, lifting her foot to show off the artistry more closely. John Fluevog is a Canadian designer, who has shod some famous feet, including the queen of flamboyance, Madonna. 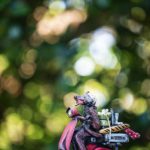 A tiny wolf on a vespa. 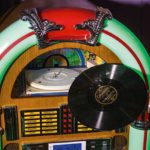 Lizette plays 50s and 60s music on her replica jukebox, bought with Chrisco Christmas coupons. “I didn’t want the groceries.” 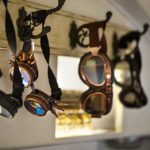 goggles are used “to protect the eyes while time-traveling”. 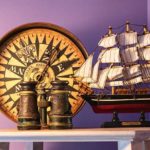 This tall ship will one day grace a pirate’s hat. 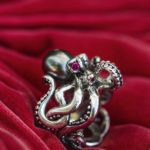 The octopus ring is a nod to Jules Verne’s 20000 Leagues Under the Sea.

The singer wore hot pink Fluevog platforms in the movie Truth or Dare. Lizzette wears them most days, as evidence that people’s lives have many different layers. “Unique soles for unique souls is his motto,” she says.

In this case, that seems wholly appropriate. Art comes in all shapes, and in the case of the Victorian pram, comes with a built-in chilly bin in case of heatstroke.

IS STEAMPUNK BRILLIANT OR BIZARRE?

To outsiders, steampunk seems odd, crazy even. What would inspire grown men and women to dress in Victorian gowns or top coats and then adorn themselves with cogs, coils and cartridges? Why would they gather to play games like teapot racing or carry weapons that resemble space guns? Steampunk is a genre of Victorian sci-fi followers who take themselves back in time and then imagine inventions of the future. The term was coined in the 1980s by author KW Jeter, a US sci-fi writer known for his dark themes.

But aspects can be traced to the works of HG Wells (The Time Machine) and Jules Verne’s 20,000 Leagues Under
the Sea.

The Victorians were masters of invention and steam power revolutionized almost every aspect of life. They also imagined submarines, space travel and robotic life. Steampunk is a re-imagining of the 19th century with a more modern view of where science is heading. Inventions and costumes are limited only by imagination.

The community takes part in festivals, balls, vaudeville events and parades. In 2016, Oamaru – commonly accepted as steampunk world HQ – made it into the Guinness Book of Records for the largest gathering of steampunks in the world. Weta Workshop, of Lord of the Rings fame, has donated artwork and statues for a permanent steampunk exhibition (see steampunkoamaru.co.nz).