Whakātane and Ōhope Beach: What to do, what to eat, where to stay 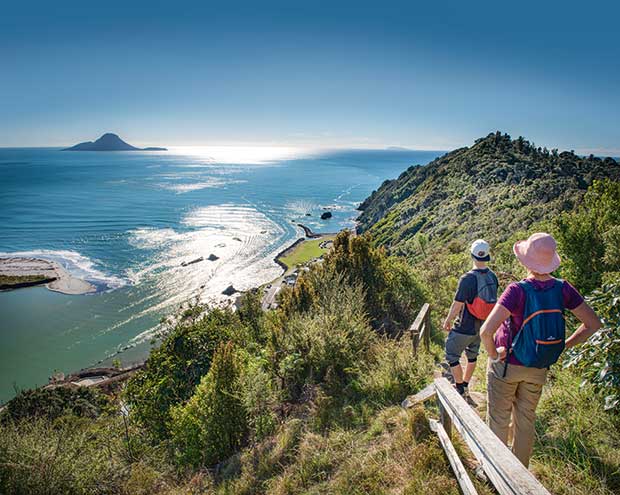 There’s an energy in the Bay of Plenty that has nothing to do with bubbling volcanoes, sunny days and surfer-friendly swell.

The residents of Whakātane and Ōhope Beach could be forgiven for resting on their laurels such is the glory heaped on this bit of the Bay of Plenty. But, instead, the locals are investing time, money and energy in protecting the local heritage and preserving its stories.

It is a place that attracts deep affection and has been since th  e first tūpuna sought respite on its shores. People and place are integrated seamlessly — from the region’s historical foundations to the te reo commonplace in cafés.

Forty-three per cent of the district’s population is of Māori heritage (14.9 per cent is the national average). And they’re a generous bunch, these sun-soaked people; their pride and purpose is shared with good-natured ease.

It takes a compelling story to evoke sadness for a building — that’s an emotion generally reserved for living, breathing things. But the Mataatua Wharenui is an extraordinary building with a remarkable story; a story of oceans crossed, ill-treatments survived, and a happy ending. The wharenui was built in the 1870s, a time of considerable unease for the Ngāti Awa people. It was to be a symbol of unity and hope, where Ngāti Awa could celebrate their ancestors and their long, deep relationship with Whakātane. It was said the wharenui was a gift to Queen Victoria, and when it opened on 8 March 1875, it was called the most beautiful wharenui ever built.

Many agreed with this sentiment, and Mataatua was claimed by the government, dismantled, loaded onto a ship and sent to Sydney for the 1879 International Fair. With no Ngāti Awa to advise, Mataatua was assembled incorrectly, with the intricate carvings of ancestors facing outwards. 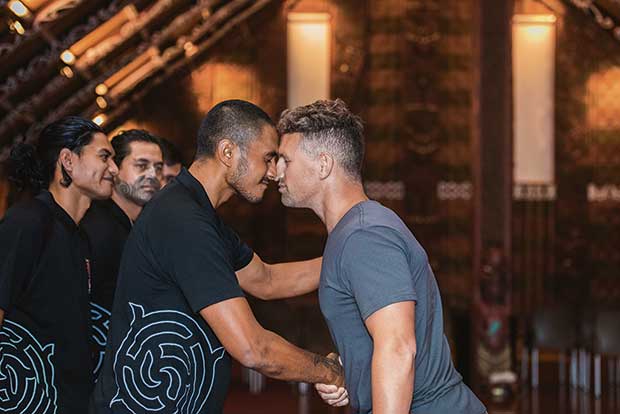 It was moved to Melbourne, then to the South Kensington Museum, where it remained on display until being moved to storage. It was re-erected in 1924 for the British Empire Exhibition at Wembley, London.

As Ngāti Awa continued to call for the return of their precious wharenui, the New Zealand government negotiated the return of Mataatua, but to the other end of the country. In 1926 Mataatua became part of the Otago Museum. The bottom was lopped off the carvings to lower the height of the building, adding to the extensive damage and scarring already inflicted by multiple sea journeys, storage and incorrect assembly.

Mataatua remained in the Otago Museum for 70 years until 1996 when, after years of campaigning for its return, it finally came home to Ngāti Awa.

Mataatua reopened in 2011 after years of extensive and intricate restoration. And so began the next chapter, a phase of education, compassion and understanding.

A story such as this needs to be told, and Ngāti Awa has created an impressive cultural experience around Mataatua — the centrepiece now known as “The House that Came Home”. There are two tour options — the Meet Mataatua express tour (one hour), and the Know Mataatua cultural immersion experience (two hours). Both include the award-winning light show Hiko: Legends Carved in Light.

But to discover the connection and depth of Mataatua to Ngāti Awa, and in a way, to better understand Whakatane as a whole, dive into an immersive experience. It includes a full guided tour, hands-on activities and a lunch with local kaimoana and delicacies (don’t miss the kumara brownies).

From 9am to 5pm (or thereabouts), Sandy Peet is a third-generation house painter, often working under the famous Whakātane sun side by side with her son. But, Sandy has another business — or two. In her seven-hectare, 500-tree avocado orchard are two luxury Mongolian yurts, complete with spa pools, heat pumps, pizza ovens and wifi.

Sandy isn’t just a master at painting; she’s also good at conjuring a little romance. And that’s what she’s done with her two private hideaways. Perfect for a honeymoon, weekend escape or child-free celebration, the yurts come with every modern convenience but feel utterly separate from the world. The yurts are from a Nelson company and took Sandy and her partner Russell Chapman four hours to erect. One is located in the avocado grove, while the other overlooks a small lake. Both are within walking distance (500 metres) of Thornton Beach.

While Sandy lives onsite and is only a call away, for the most part, the only other resident is Brodie, the english setter. Breakfast and grazing platters can be delivered on request, because really, who wants to drag themselves out of the spa to cook?

Whakātane’s journey to becoming the Kiwi Capital of the World began in 1999 when eight North Island brown kiwi were discovered living in the Ōhope Scenic Reserve.

Since then, more than 100 volunteers have put thousands of hours each year into protecting the kiwi using pest-trapping, monitoring and community education. By late 2018, more than 300 birds lived in the reserve. The population is now so well established that residents often fall asleep listening to kiwi conversations, or peek out the window to see one enjoying a backyard meal.

Russell Ingram-Seal is a bug man. The creepier, the crawlier, the bigger, scarier — all the better. This makes him the ideal guide for a night-time kiwi walk. When the two-legged feathered friends win the game of hide and seek (which is fairly often), Russell is ready with a torch. 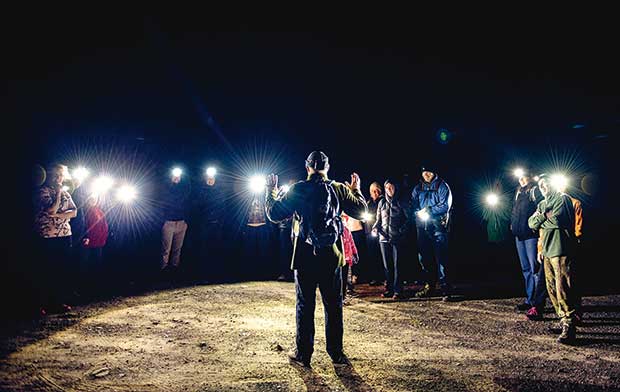 His beam showcases the nocturnal residents of the Ōhope Scenic Reserve. Sheetweb spiders weave webs and wait patiently for dinner to land in their laps. Centipedes slide through the leaf litter. And wētā —oh, the wētā — cave wētā, tree wētā, bigger-than-a-hand wētā.

A night walk is the best way to understand the work of the Whakātane Kiwi Trust. Russell and guides share their knowledge while always keeping an ear out for the kiwis’ call.

Should the weather, stars and fates align, one of the 300 birds calling this region their favourite restaurant may wander into view. But even if they don’t, it’s well worth the adventure. Kiwi Night Walks take place on Friday nights in April, May and June. Book in advance via the website — there are only 20 spots per walk.

Cost is a koha or donation ($20 per adult, $10 per child and $50 per family). Bring warm clothing, suitable walking shoes and a small headlamp or torch. A reasonable level of fitness is required. whakatanekiwi.org.nz

More stories you might like:
Freedom to roam: Exploring Mount Aspiring National Park in the all new Jeep Gladiator

Forget fish and chips on the beach. There’s only one thing to enjoy on the white sands of Ōhope, and that’s a woodfire pizza from the Chez Louis caravan. Louis Desbats chased a rugby ball from France to New Zealand 15 years ago. 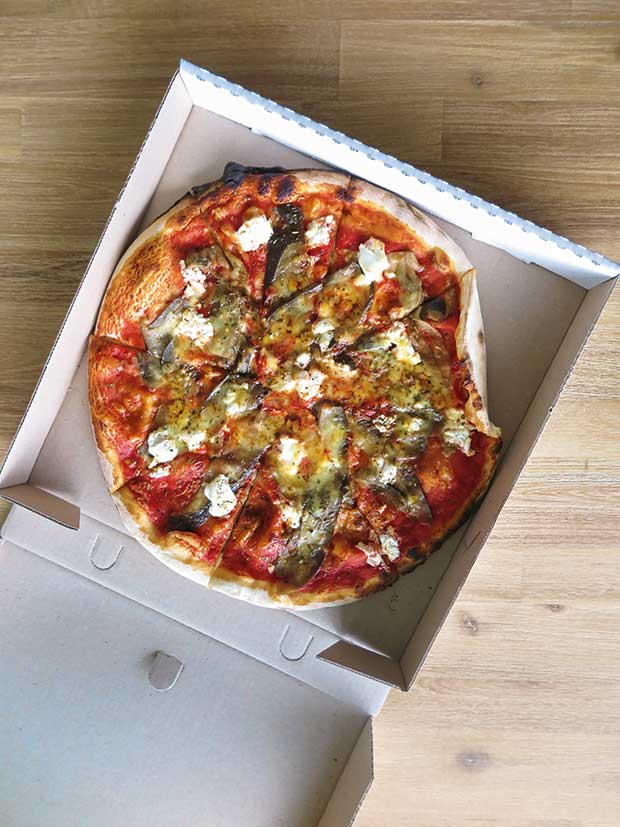 But he discovered that while we excelled as a nation at most sports, our food can be slightly less stellar. Although a carpenter by trade, Louis had spent a summer or two making pizza, and now travels the region in a caravan/mobile pizzeria complete with a wood-fired oven. His pizzas are legendary — perfect, homemade dough with just the right amount of topping.

Chez Louis’ Facebook page posts the pizzeria’s nightly whereabouts. In Ōhope, it is often outside the medical centre on Pōhutukawa Avenue.

Timing is everything at Fisherman’s Wharf Café. Situated above the gentle tides of the Ohiwa Harbour, the eatery is in prime sunset position, with a large deck and big windows perfectly placed to let nature entertain. 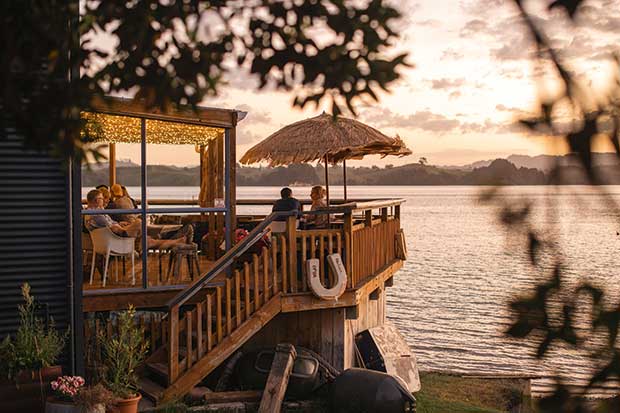 Once the show is over, and orange and pink have turned inky blue, the food becomes the main event. Every town has a “celebration” restaurant, and Fisherman’s Wharf is just that for Ōhope. Diners can treat themselves to the best lamb in the area, and will always order dessert (the banoffee pie is pure indulgence).

For those either watching their wallet or feeling like something quick and easy, takeaway fish and chips are also available from the outdoor window.

This is an excerpt from The Insider’s Guide to New Zealand 2020. Order now for the special pre-order price $15 (delivery last week of Nov). *Offer expires 24 November 2019