Step back in time to summers past when crowds were scarce and it seemed the biggest problem was what flavour ice cream to choose.

Every step on the short walk to the Ōpārara Arch is magnificent, so it is fair to think that all breaths have been taken by the time the structure comes into sight. Not true. This towering limestone formation will always steal just one more gasp. There’s a shiver of magic in this achingly remote part of the country and photos, frustratingly, do not do it justice.

The Ōpārara Basin is an isolated, almost untouched area of the Kahurangi National Park, and its glorious forest is a mix of beech and podocarp with thick mosses and ferns underfoot. 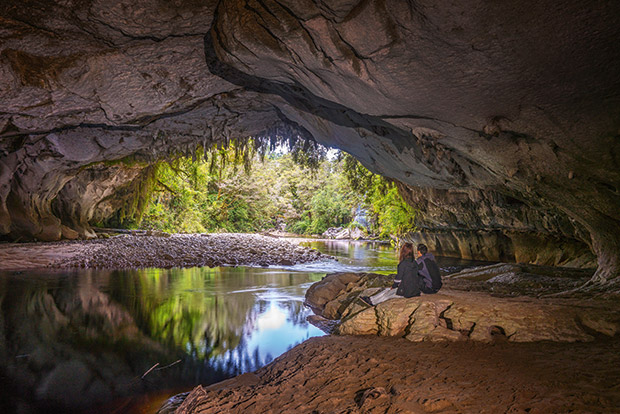 The land is a combination of 350-million-year-old granite, covered in limestone and mudstone, which the gentle hands of time have shaped into staggering formations of caves and arches. And the area is home to many native species, including the rare short-tailed bat and giant land snails, plus it’s a sanctuary for great spotted kiwi.

There are two arches accessible from the lower Ōpārara car park — the 43-metre-high Ōpārara (a walk of one kilometre each way), which is said to be the largest limestone arch in Australasia, and Moira Gate (1.2 kilometres, or a four-kilometre loop walk to Mirror Tarn). Moira is the smaller of the two at 19 metres but no less picturesque. Despite the river’s tannic cola colour, the water is crystal clear as it wanders through the cave. There’s a short detour to climb down and follow its path. Look up to spy stalactites and look down to watch for whio — native and endangered blue duck.

FOR A SCENIC DRIVE 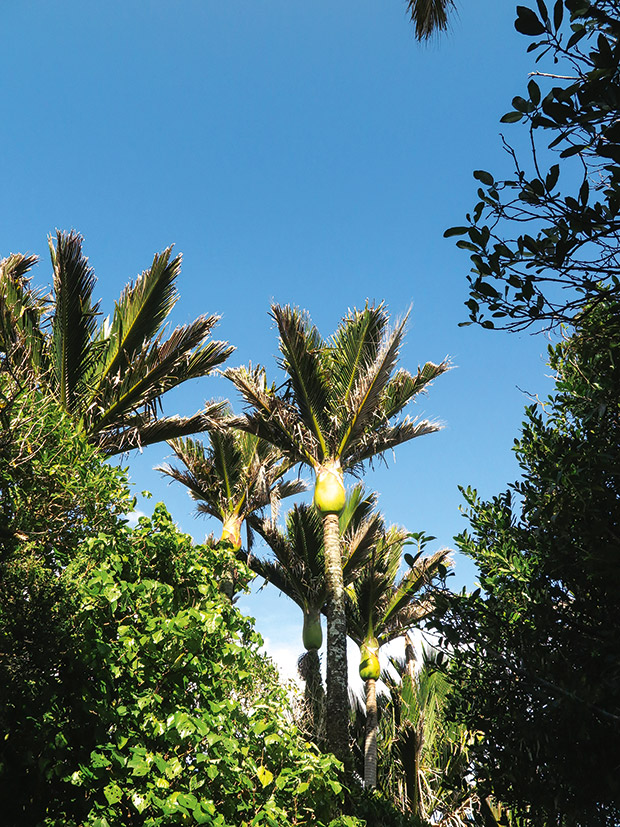 The Karamea Highway twists, turns and dips through a thick rainforest punctured by craggy, weather-beaten mataī, rimu and rātā; ancient behemoths draped in a finery of frond and moss. What better excuse could there be than this to stop often rather than spend an age staring at the back end of a truck? There are several short walks and lookouts between Waimarie in the south and where the road ends at Kōhaihai, including Lake Hanlon just south of Karamea, and the signposted “Large Mataī Tree”.

These are caves of wonders — 13.7 kilometres of twists, turns and secrets, including well-preserved bones of moa and other now-extinct birds. Book via the Karamea Information Centre, or online.

Since the 1880s, New Zealanders have trekked into the mountains at the head of Lake Pūkaki to pay homage to the country’s tallest mountain and to rest in its calming shadow. On the site of the Hermitage Hotel, there once stood a simple wooden structure at which travelers arrived at the end of a three-day horseback trek. In the 1960s and 1970s, now the Hermitage Hotel, guests gasped in awe at the famous mountain framed in the massive and, back then, revolutionary “picture windows”. There is still much magic in that view.

1. The Hooker Valley Track (three-hour return) is the walk everyone talks about. It’s not arduous and covers three swing bridges, mountain views, and the icebergs at the Hooker Glacier terminal lake (unless it’s winter and the lake is frozen, which is also a thing of beauty). Give Freda’s Rock (just 20 metres in) a friendly pat in passing. It’s where self-taught Australian mountaineer Freda du Faur had her famous photo taken in 1910 after becoming the first woman to climb Aoraki/Mt Cook. 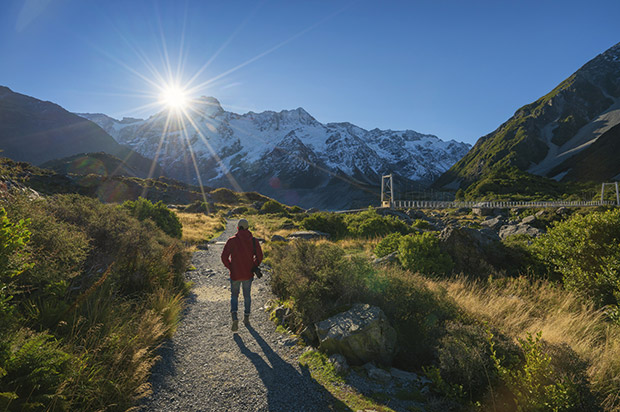 2. Red Tarns Track. If an aerial view is preferred and calf muscles are compliant, the Red Tarns Track is a steep, two-hour-return trek from Aoraki/Mt Cook Village. That tallest peak and its companions are visible for those relishing a bit of elevation. 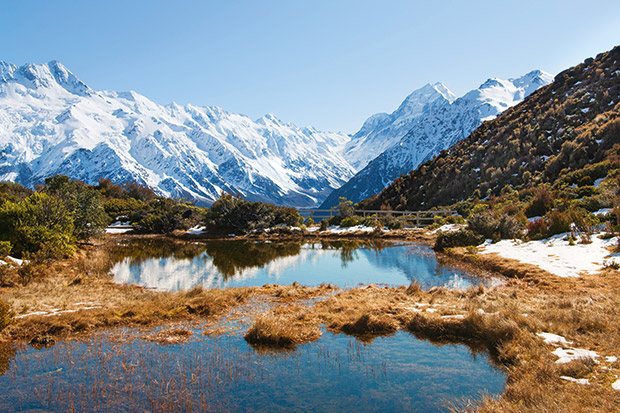 “There’s no grass to distract the horses, so they are fully focused on their work,” says Petra Yorke, owner of Surf and Turf Horse Riding. Swimming with horses is one of the options open to riders, along with farm rides, sunset treks along the beach and “fish and chip” rides, where there is a break at halftime for a beach picnic. 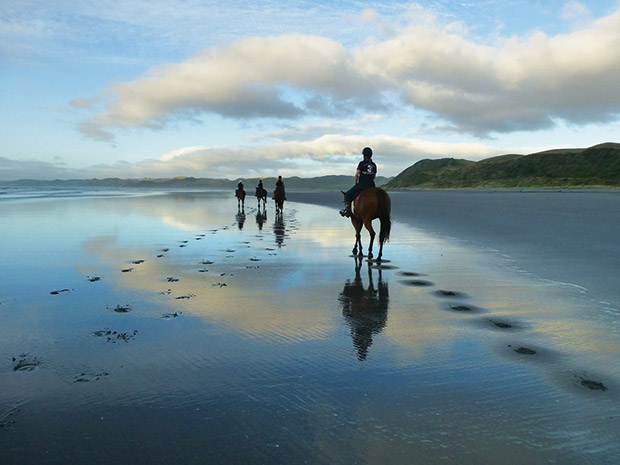 It’s easy to imagine why beach rides are the most popular. Petra, who taught herself to ride via a YouTube video, regularly exercises her horses on the sands. “People would come up to talk and pat the horses. I decided I should make a business out of it.” The horses, up to their manes in salt water, were happy to oblige.

KAYAK IN THE HARBOUR

The nooks and crannies of the pancake rock on the northern edge of Raglan’s Whaingaroa Harbour attract all manner of flora and fauna. The best way to investigate is by kayak. On route, paddlers may even catch a glimpse of orca or maui dolphin, both of which are found in these parts, and will certainly spot birdlife nesting on the rocks. The pancake rocks, built up over millions of years, are like sculptures rising from the ocean. 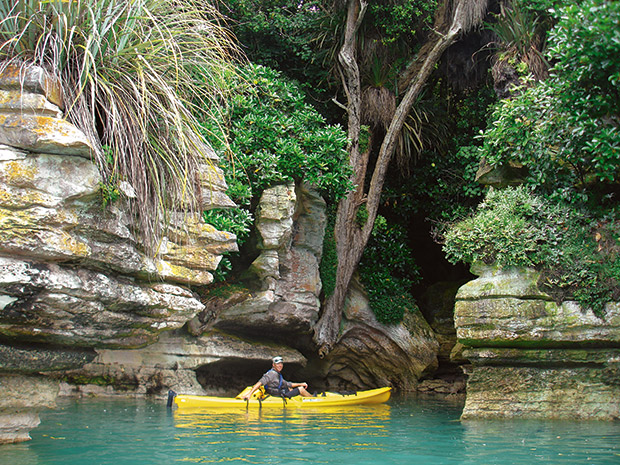 Visitors can kayak around and under them, and through corridors so narrow they need to keep their elbows tucked in. Young people will love being in charge of their own canoe and leading the path of discovery. The tours can be guided or independent. Guided tours include a stopover on a sandy beach for coffee and homemade fruitcake.

Raglan is a mecca for surfers. Sun-bronzed, dreadlocked young backpackers and gnarly old board riders come from all points of the globe to ride the break and share a beer while they relive their experiences. But it’s also the reason many locals settle here. Manu Bay is the best break by world standards but also the most difficult. It’s a long left-hand point break on a boulder beach and, to reach the waves, surfers must jump off the rocks, paddle like hell and fight for a place in the line-up. This is not for the timid. 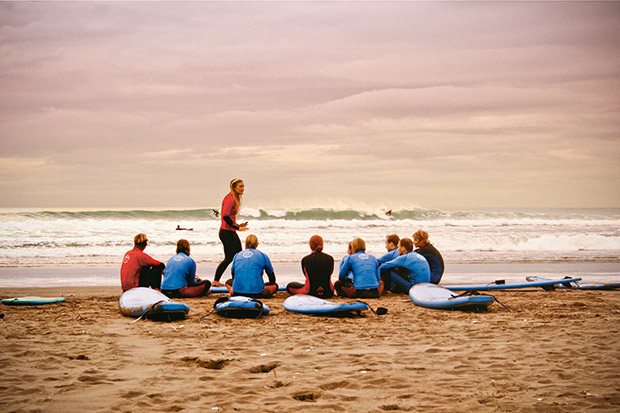 On a good day, there could be dozens trying to drop in on the same wave. From a seagull’s viewpoint, the wet-suited surfers look like black seals floating on the sea. The adjacent Whale Bay has softer swells and is suitable for the less intrepid, but waves can still reach four metres. On an epic day, it’s possible to surf from one bay to another. For learners, the best place to practise is Ngārunui Beach, which has no rocks and fewer people.

WATERFALLS AND A WINDSWEPT COAST

Nugget Point, with its 150-year-old lighthouse, is the symbolic northern landmark of the Catlins. The 10-kilometre road from Kaka Point leading to the headland hugs golden sandy bays with ample stopping points and seats made of odds and ends. A spectacular 20-minute walk high above the water through wind-sculpted vegetation leads to the point, with its panoramic views over The Nuggets and the infinity of the Southern Ocean beyond.

Nugget Point is home to fur seals and 40 species of sea birds that visit or reside here. Nearby, Roaring Bay has a viewing hide to spot the world’s rarest yellow-eyed penguin (hoiho) nesting in the coastal forest. The best time to view these shy and sensitive creatures is late afternoon when they return from the day feeding at sea. Visitors must stay off the beach after 3pm to not disturb the weary homeward waddlers. Instantly recognizable as one of the most photographed in the country, these falls have been reproduced in calendars, phone books and stamps for decades. This legacy, however, does not diminish their radiance and almost ethereal beauty when viewed for the first time in real life.

Located 20 minutes from Owaka, Purakaunui Falls are accessible via a short 10-minute walk through thriving podocarp and beech forest. The enchanting quality of water cascading down a series of tiers is a spellbinding marvel of nature — the photos have always been impressive, but the real thing is even better.

Hot water flows through The Lost Spring’s system of pools, all of which are connected. From the hottest — Crater Lake, which sits underneath the Volcano — to a cavern called the Grotto, and finally spilling out into an area known as the Bath Tub. The water that emerges from a small crack in the bedrock is sterile, fossilized after more than 16,000 years underground. It is rich in more than 400 minerals and surfaces at about 48.5 degrees Celsius, with pool temperatures ranging from 30 degrees to 41 degrees. The Lost Spring takes up about 1.4 hectares beneath a canopy of towering nīkau trees home to tūī and kererū. Lush native and tropical planting blends around the pool edges, blurring natural and manufactured. Try “The Pool Combo”, which provides the chance to explore all the pools, a platter and a cocktail, poolside or in the restaurant.

Here’s a slice of New Zealand that hasn’t changed since Kupe waded ashore — except for there being far fewer birds. New Chums Beach is such an odd Boys’ Own name but don’t be deterred — the beach is everyone’s dream of escaping to a deserted place. There’s no road, just an estuary to wade through, slippery rocks, a narrow bush track, a headland and then — heaven — that holy trinity of sun, sand and sea with majestic pōhutukawa for shade and a smattering of folk scattered along the shore. There’s a stir going on about the area and potential development and whether it will impact what British newspaper The Observer called one of the top 20 beaches in the world. It’s best to go and see what the plan is — it could be surprising.

Wading through the estuary is best done at low tide, or dry clothes will get wet. The rocks are slippy, so don’t wear jandals. And there is no drinking water at the other end, or food or shops — or anything. So backpack it all in and backpack everything back out.

Access: Only accessible by foot or boat. Cross the stream at the northern end of Whangapoua Beach and walk along the shoreline. It meets with a path that cuts through the saddle, which ends at New Chums Beach. The walk takes about 30 to 40 minutes one-way.