What humans can learn from mushrooms 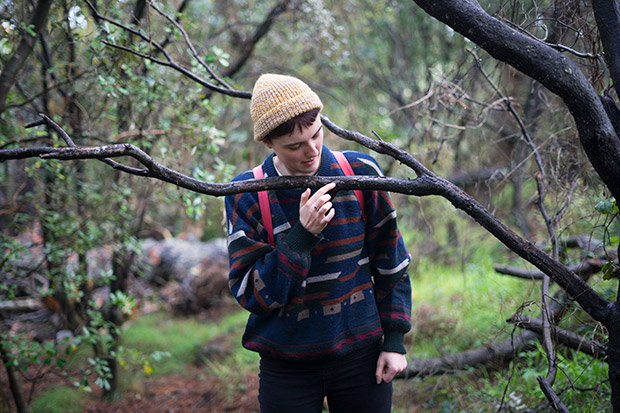 Mushroom enthusiast Alice Nicholls explores the mindset of a mushroom in her master’s thesis titled ‘How to Become a Mushroom’.

Alice Nicholls (English) is a mushroom enthusiast, having focused her master’s degree on human-mushroom connection. Her thesis, ‘How to Become a Mushroom’, proposes that “the moment of interaction between a person and a fungus is transformative of both subjects”, whilst challenging the idea of what is considered valuable from a scientific perspective. Ali now works as a food researcher for a well-established charity.

I had coffee with Ali in a bustling innercity cafe, before we set out foraging. Our conversation zigzagged wildly as we explored wonderful tangents about the state of society, capitalism, and how food connects and empowers individuals and communities.

Sophie Merkins: You did your anthropology master’s degree on human–mushroom connection. Can you tell me about that?

Alice Nicholls: I wanted to disrupt the idea that only humans have culture and then see whether anthropology, this very human-orientated discipline, could produce ethnographies and writing and studies about nonhuman things. It was all about getting to the essence of mushrooms, rather than trying to tell a human story by looking at mushrooms as a metaphor.

AN: In our cultural shared imagination, particularly Western or colonial, mushrooms are kind of creatures of mystery. They can have a lot of stigma attached to them. I have a strong fascination with decay. The process of breaking something down to molecules and then reconstructing something – that’s what mushrooms essentially do. They’re the alchemists of the natural world. 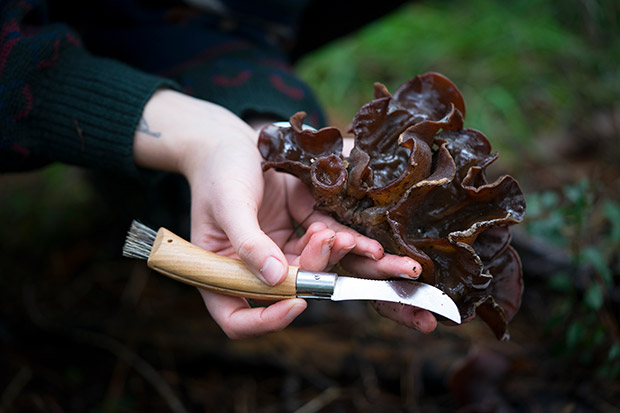 I’m also super interested in food, so I was wanting to find mushrooms that I could eat. Then it all spiralled into my relationship to the cosmos, which tends to happen with me.

SM: Were there any memorable moments or discoveries in your study?

AN: The project really evolved when I was accepted to go to the Fungal Foray. Every year, Manaaki Whenua (Landcare Research) organises a group of amateur and professional mycologists to go to one location in New Zealand. I went to Moana on the West Coast of the South Island and it changed my life. I was never a hiker, I was totally new to everything, and it was an eye-opening sense of attunement to the world. I felt like I was living on a different plane of existence.

It was raining, it was freezing cold, and all my clothes were wet. But I would step into these forests and then suddenly I was in another world. It obliterated this old sense of how you had to do things. At the time, I was having quite a depressive episode and my mental health was not good. I was feeling very detached and dissociated. 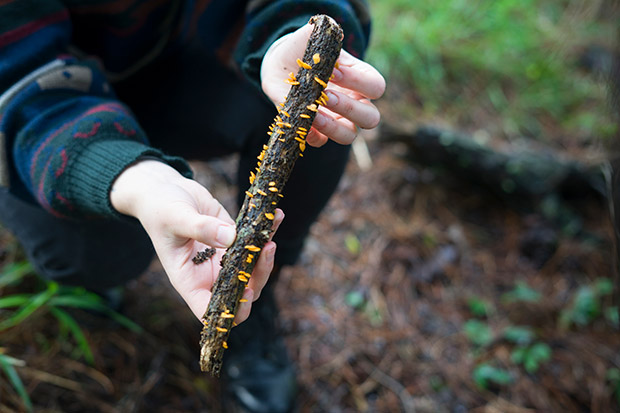 I was just there, quietly existing and letting my mind fall out of my ears. It was transformative for me because I realised that the only expectation in the natural world is that we look after each other. That’s all that the planet wants. And I found a great sense of acceptance, almost as though the forest didn’t care if I was a good person, if I had energy, was the best friend, if I knew who I was, or about all these anxieties that I had building up in my body and in my mind. It was very freeing. I think that connection, in that respect, allows us to let go of a lot of pressures that we accumulate over time when we are constantly trying to prove ourselves. In that respect, mushrooms are quite emotionally transformative, particularly for me.

I ended up writing a very personal thesis. It was called ‘How to Become a Mushroom’ because it was essentially the story of how I transformed physically, emotionally, and sensorily. It was focused on how when you form a bond with something, like mushrooms, or any natural species, you become a kind of kindred spirit to it, become connected to it, you live in harmony with it, so that you can keep fostering that connection.

SM: What can we learn from mushrooms?

AN: Mushrooms are the ultimate original recyclers. They take anything and they turn it into life. Paul Stamets, a prolific American mycologist, did a study after the oil spill off the Gulf [of Mexico] where he inoculated gravel that was soaked in oil with oyster mushroom spores. The mushrooms digested the carbon, cleaned all of the oil, and then produced mushrooms that were edible.

No human intervention of any kind could do what the mushrooms could do naturally! Because that’s what mushrooms have adapted to do. They will clean up after us. Mushrooms give a sense of death as being a transitional thing. For me, I don’t necessarily think of having an inner core, or a fixed being. I’m very adaptable to different environments. 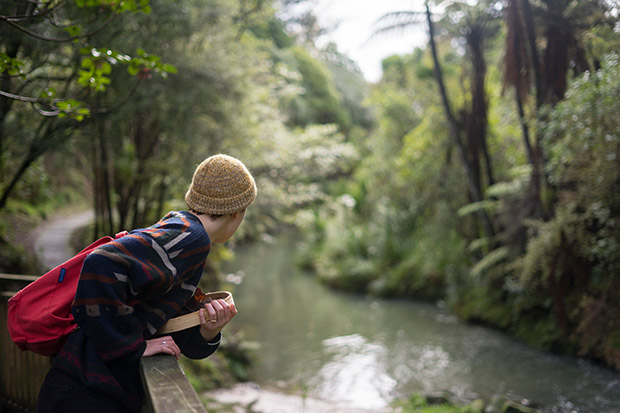 When I think about the decay process, then it’s a transformative process for me. It’s not necessarily an ending. Consciousness will change, but my body will go into something else. And that’s how the natural world works. It’s always transforming, but it’s a closed system. We associate mushrooms with rot, decay, death of the self, ego death, sludge, and slime.

Mushrooms are the symbol and manifestation of life in death. They flourish, like flowers. I think they are so beautiful and the concept that decay is a necessary part of flourishing, new life, freedom, and growth gives assurance to so many things.

SM: How did your master’s lead you into your current work as a food researcher for a large non-governmental organisation (NGO)?

AN: When I finished my thesis, I began working at an NGO that delivers food parcels, but I could see issues that nobody was talking about changing. You get swept up in that hectic, demanding environment of trying to catch up to the need all the time. We’ve got a hugely diverse range of people who come in, in terms of their food background, whose idea of good and nourishing, soulful food varies from community to community.

The food that we give out at the moment is quite homogeneous; the diet we are promoting is a very Western diet. I don’t think it encourages a sense of being seen or being acknowledged, and I think it inadvertently promotes the idea that this one particular Western diet is the best and the diets that exist outside of that cultural framework are not as healthy, or not as valued, or not seen as
necessary.

More stories you might like:
How to make natural after-sun skincare using aloe vera, chamomile, makomako and lavender 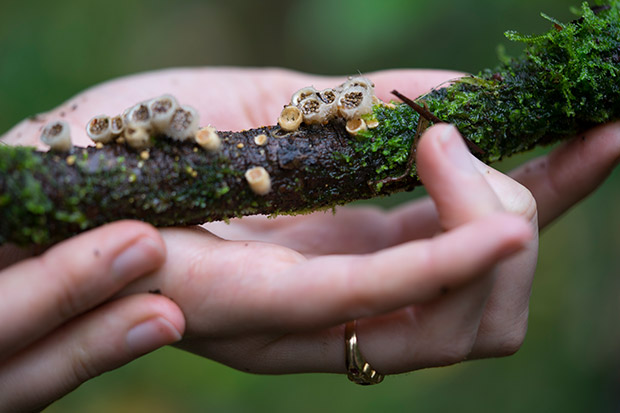 I’m passionate about giving people food autonomy to reinvigorate food traditions. So I approached the manager and asked to do some research into this area of food, because I think this is an intervention that could change the way we think about things. As far as research output goes, if we could produce radical, exciting research and demonstrate that it was effective, then it could
change the food systems that we have in the country.

I’m pushing for a change in mindset about how food systems are supposed to work, to focus on empowerment and connection. We’ve got a huge health crisis with impoverished communities, with things like heart disease and diabetes, that I do believe comes back to the fact that we’ve constructed an artificial system. Whereas I think a system that naturally occurs, that people are connected to and invested in, through their work, their presence, and their sense of emotional connection to that place, would produce different health outcomes.

I think there’s a fear, actually, or maybe it’s more of a prejudice, that if you put resources into the hands of people who haven’t been granted resources by the system, then they’ll somehow mess it up, or they won’t know what to do, or they’ll do something inappropriate with it. It’s a big lack of faith. If you are afraid to give people resources to create a life that they want because you are worried that the outcome will not live up to your standard, that’s your prejudice. We need to change our attitudes towards the community, because they will move mountains with resources.

SM: It comes back to food being power or an empowering tool?

AN: Absolutely. I totally agree with what you say about connection [food can connect us to ourselves, our environment, and our communities]. Disenfranchisement for Māori in New Zealand is a huge part of it. The disruption that colonisation has caused and is still causing – it’s all disconnection. I think it’s the same for Pākehā in New Zealand. I read this beautiful term by Robin Wall Kimmerer, who wrote the book Braiding Sweetgrass: ‘ancestral taproot’. I think that’s a really nice way of thinking about people drawing their energy from the earth and the ground that they are on and getting their power for life and their empowerment from that connection. I think that Pākehā New Zealanders don’t necessarily have that as strongly, but I do feel that there is potential for it to exist and coexist alongside
Te Ao Māori. I don’t think they have to be the same, but I don’t see why that connection couldn’t be more rigorous and empowering [than it is now].

SM: How do you think we could get that connection?

AN: Aside from dismantling capitalism? Haha, that’s a start! There’s a lot of demand for it in my generation. I feel that a lot of the people are getting a sense that even if they’re embedded in or celebratory of the system that we have now, it can’t sustain itself.

I feel that a big part of the disconnection comes from the idea that we think we can control and change our circumstances or the environment around us without consequence. Working more with the rhythms of life could enhance that connection.

I think the system that we have is very demanding. When you go out into the bush or to the beach, it brings back that connection. For a lot of people who have very limited resources, it’s so hard to have those opportunities but there is a much stronger sense of the urgency of it. If you participate in the system in the way that it operates, you don’t notice it as much. Whereas I think for people who can’t work, or they’re working and still living in poverty, or they’re not getting supported in the ways that they need to, or there are issues in the community that are causing upsets, I think those people are more aware that it would be so much easier or better if we could just look after ourselves.

After our chat, we headed to Te Auaunga (Oakley Creek), where we sought out damp areas and decaying trees in search of fungi. I’d been foraging edible mushrooms all autumn and early winter, but suddenly Ali had shown me a new respect for fungi and the role they play both ecologically and emotionally. Hunting, gathering, and growing have become a privilege, with many not having the resources or access to pursue them, but during my time with Ali, it occurred to me that urban foraging has significantly fewer barriers and can be nourishing on many levels.

It brings me hope that people like Ali are out there in the world, trying to uproot capitalism and give power back to the people who need it the most. Food is obviously a necessity, but it is also a tool of connection. Ali recognises this and works to create a better world.