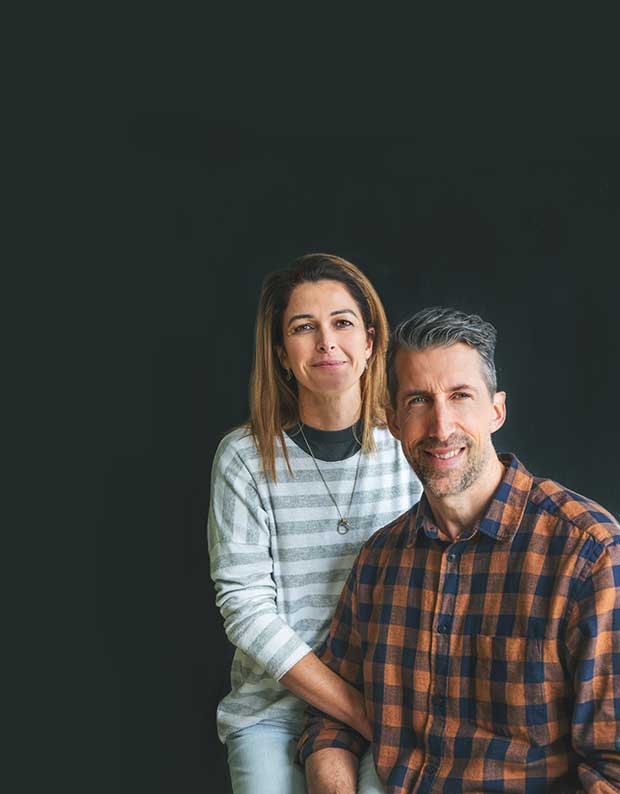 Chantel and Mike Priddy are quenching a thirst for living well with a traditional fermented drink.

Chantel and Mike Priddy fell for each other while they were both pulling pints and mixing cocktails in an old-school Sydney bar. Nearly 20 years later, they’re shaking up the drinks business in a new way.

The Priddys worked together at Balmain’s London Hotel for almost a year. But it’s unlikely regulars would think much of the non-alcoholic drinks the pair mix now. Just four years after returning to Auckland and opening a café and drinks business under the name Greenleaf Organics, Mike and Chantel are making a name for themselves with drinks designed for wellbeing.

Their nutrient-packed made-to-order smoothies and “immunity shots” are delivered nationwide, but they have a growing following for a drink they made almost by accident. 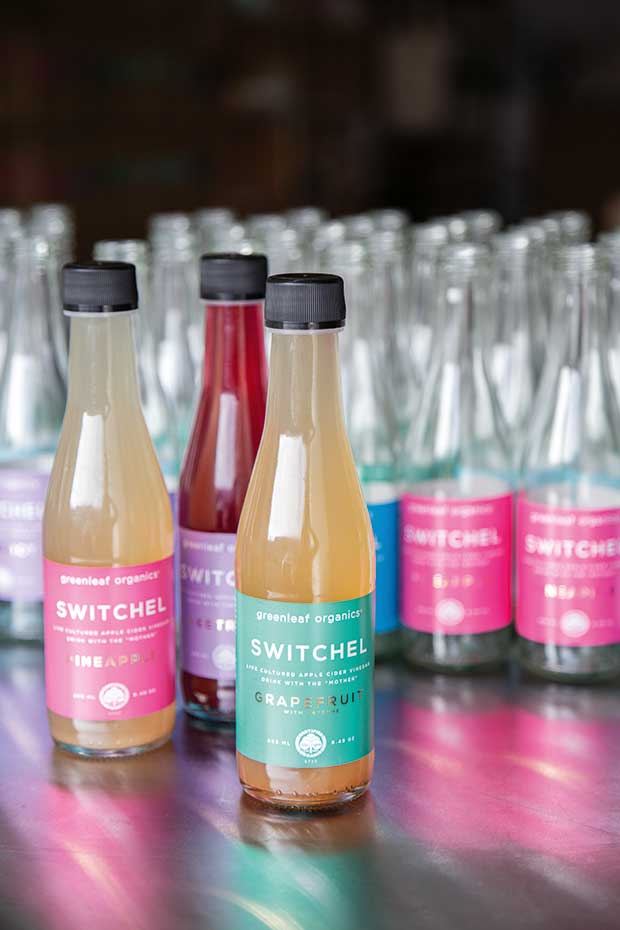 “It would be great to say we had a plan, but it wasn’t like that,” Mike says. “We were mixing a few things one day — a bit of apple cider vinegar, a bit of maple syrup — and lo and behold, we had a drink. We didn’t know it was a thing until we started researching apple cider vinegar drinks and found something called haymaker’s punch.’”

The Priddys had inadvertently stumbled upon switchel, a drink believed to date back to the 1700s. Switchel’s origins are much-disputed. Some believe the Amish invented it; others claim it originated in the Caribbean. But it’s best known for its popularity among farmworkers in the United States. Even Laura Ingalls Wilder (of Little House on the Prairie fame) refers to a switchel-type drink. 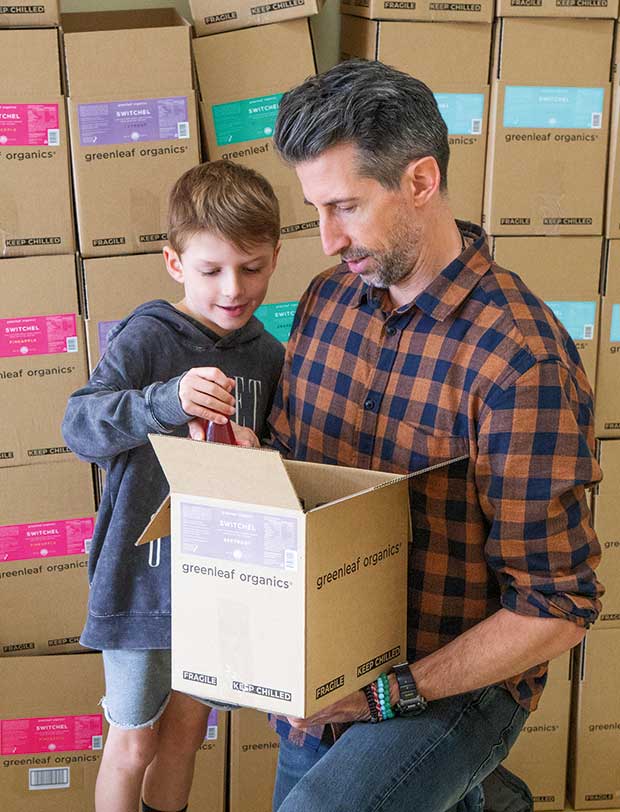 “It was an early Gatorade-type scenario, where they were using raw materials they had in abundance like molasses, apple cider vinegar, ginger and lemon,” Mike explains. “They’d whip it up for people to guzzle back because it was so thirst-quenching when they were out in the fields.

“We looked at it and thought, ‘Well, there’s nothing in the New Zealand market with that base to it, so it all made sense. It sounds so lame, but it happened organically. The more we looked at it and started playing around, it took on a life of its own. It’s not your average drink, but that’s kind of why we’re doing it.” 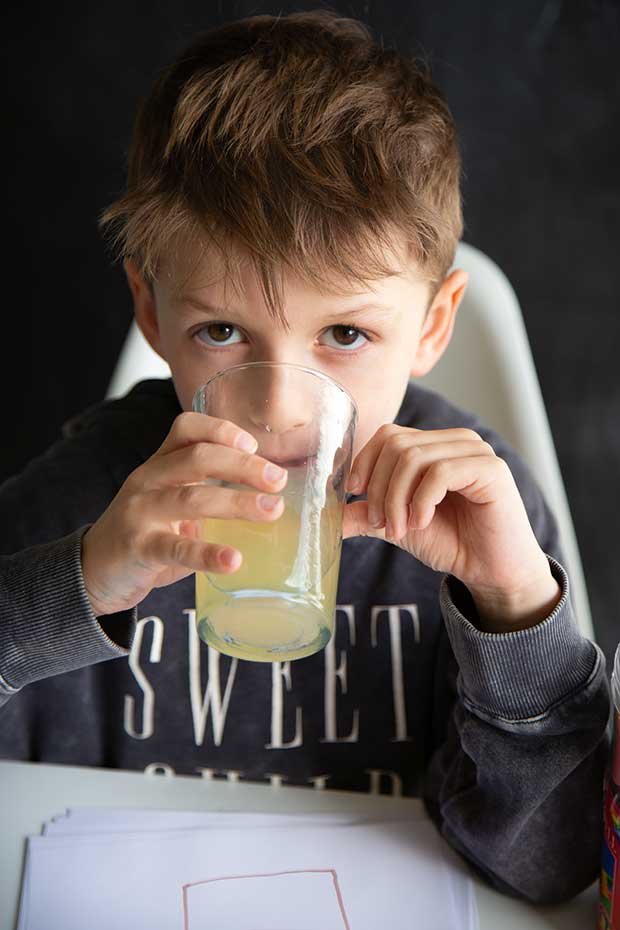 Switchel turned out to solve — and create — several puzzles for the Priddys, who returned to Auckland with their two children in February 2015. They’d long wanted to work together, thinking they’d found the answer when they opened their Greenleaf Organics café in Kingsland five months later. They planned to run the café out front and wholesale trade from the back. The organic focus was inspired by the health of their son Rocco (7).

“We were already pretty healthy, but when Rocco was about six months old, he developed some minor intolerances,” Chantel says.

“He’s intolerant to a few things and his immune system is sensitive. Going organic is the way we manage that, and that’s why it’s the main focus of our business.” Their research into gut health led them to apple cider vinegar, which some studies show helps with regulating blood sugar and promoting digestion. They built a fan base for Greenleaf Organics’ nutrient-rich smoothies made fresh and delivered nationwide to order. And immunity shots, which consist of organic apple cider vinegar mixed with a variety of other ingredients. The desire to make something with a longer shelf life saw the experiments that led to switchel.

“We knew we needed to look at other ingredients, and that’s where the apple cider vinegar came into play,” Mike says.
They tried their first brews out on their café clientele. The feedback was so positive that they introduced a lemon-flavoured switchel, then called GLO Swizzel, after rigorous experiments and tests. They were determined to protect the integrity of the apple cider vinegar base, which they get from Coral Tree Organics, and still maintain a fridge-stable product.

“Using apple cider vinegar as our main preservative means we don’t have to use additives,” says Chantel. “But we had to get it lab-tested to ensure it would last for six months.

“We didn’t want to pasteurize it and lose the goodness that comes from the fermentation, so maintaining that chilled chain of distribution has been important. It’s been tough.” 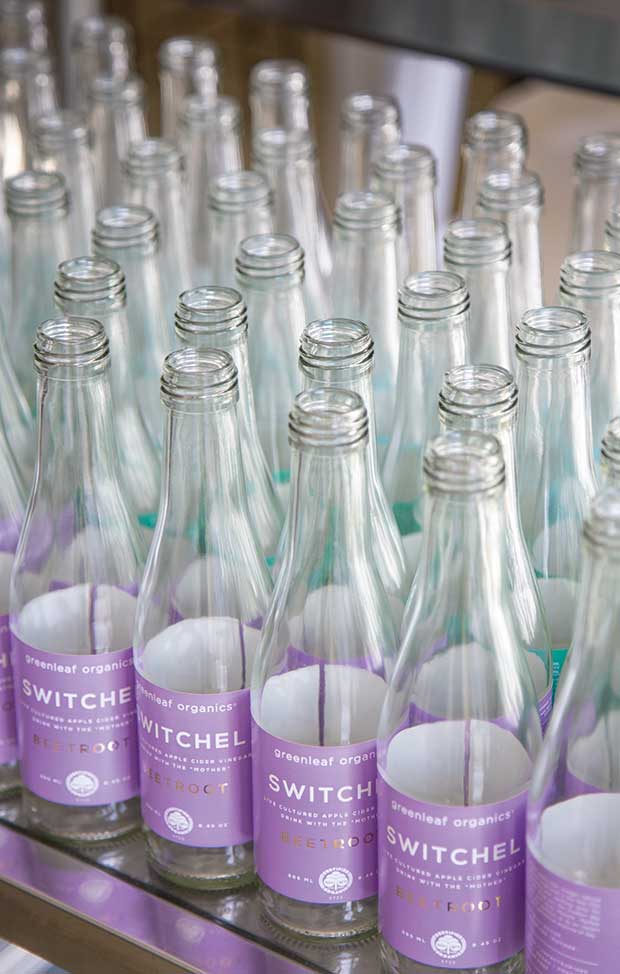 Today, Greenleaf Organics produces about 2000+ bottles of switchel a week. Pineapple is the most popular flavour, followed by turmeric, lemon, grapefruit and beetroot. A blackcurrant version will be added in September. Thanks to a new partnership, three cents from the sale of every bottle will go towards the Mental Health Foundation.

Mike says the massive growth in “functional drinks” designed to offer health benefits for mind and body has helped pave the way for switchel’s uptake. A silver medal in the 2019 Outstanding New Zealand Food Producer Awards gave them another confidence boost.

“Kombucha has changed the way people perceive these drinks now. It’s still ongoing. Sometimes when I’m doing tastings people say, ‘What? Apple cider vinegar? No way.’ But the market is very different from where it was five years ago.”

But devoting themselves to switchel has meant sacrifices. The Priddys, who juggle working together with parenting Rocco and his five-year-old sister, Edie, realized that they’d reached a kind of tipping point earlier this year. They sold the café side of the business and now run the wholesale operation from Saint Johns in east Auckland. “We were always focused on growing the wholesale side, and managing that and the café got too hard,” Mike says. “We didn’t have the time. We’re very proud of what we did there though. The café put us on the map, and without it, we wouldn’t have developed any of our products.”

They’re both involved in hands-on production, with a few staff to help out on scheduled busy days. “It’s quite similar to how it was when we were working in the pub,” Mike says. “I tend to be a bit slow, while Chantel is a fast multitasker.

“We annoy the hell out of each other sometimes. But it’s amazing to have someone who has your back and who understands what you’re trying to do,” adds Chantel. “We know we wouldn’t be here without each other.”

The Priddys cheerfully claim to drink everything from chardonnay to camomile tea.

Chantel: “This winter I’ve been bouncing between either chicken or vegetable broths. We also drink a lot of switchel and smoothies at home. But we’re not about cutting out any food groups, either at home or in the business.”

Mike: “I have a version of a bulletproof coffee every morning, usually with a dose of coconut butter or MCT (medium-chain triglyceride) oil. It’s supposed to be good for brain function and sustaining your blood sugar levels if you’re not eating in the morning. If I go to the gym in the morning, I’ll have one of those beforehand, and then I’ll eat afterwards. I occasionally have a cappuccino, but I usually have a short or long black. If I didn’t have coffee, I’d be screwed. But I try to limit it to two a day.” 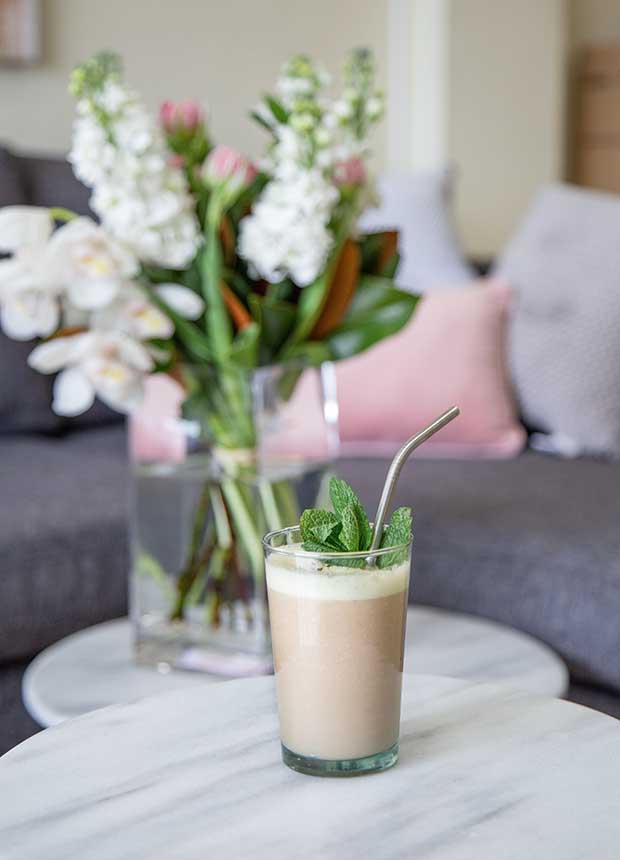 Put all ingredients in a blender and whiz until smooth. Pour into glasses and serve. Serves 2