What to feed your chickens to keep them healthy 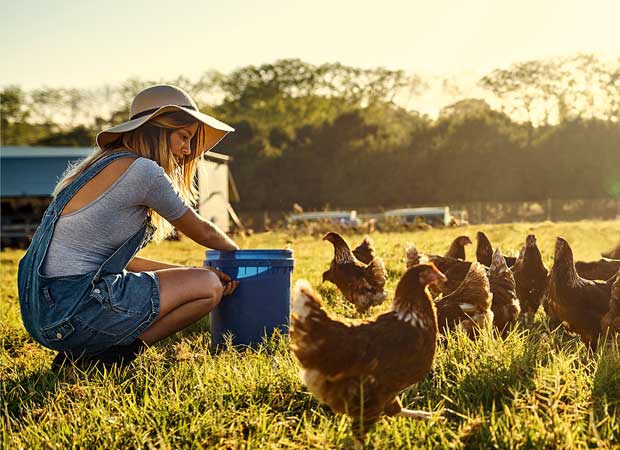 Why the right feed can be the difference between life and death for your chickens.

The feed you choose can affect bird health and well-being in many ways. One of the more interesting recent queries I’ve had came from a poultry-owning couple who regularly dress and eat their home-grown birds.

“Two weeks ago, when cleaning two birds (after killing them) we discovered that their livers were pale yellow and very loose, like paste. This discovery repeated itself yesterday. One of yesterday’s birds was very young, and the liver was a healthy red but spotted with pale white tumours. The other bird was older, and the liver had that same pale yellow colour and a wet pasty-mash consistency. The rest of the organs looked fine, and the birds appeared to be very healthy (before we killed them).

To get a diagnosis, I brought the two livers to our vet, who scratched her head and said she would get back to us. All our birds are free-range, fed two rations a day of multi-pellets, with some extra protein provided by meat and blood meal from our local abattoir. (The birds) usually roost in pine trees and on the gates of our feed shed, although there is other shelter available for them. We use minimal amounts of spray, and nothing has changed. Can you give us an idea of what’s going on? Should we order a lab test?” 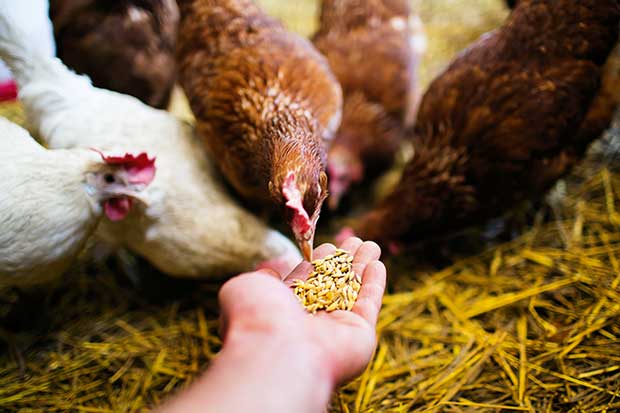 The liver in an adult chicken is normally reddish-brown in colour. The paler red-tan of chicken livers you see sold for pâté is due to a greater quantity of fat. If an adult bird has a very mushy, pale, creamy-yellow liver, it’s due to fat storage, and the carcase may also have fat laid down under the skin of the abdomen. It’s very difficult to diagnose anything when all you have is a written description and observations from someone else. But in this case, with the birds appearing to be outwardly healthy, several disease conditions which can affect the liver could be ruled out.

That left the likely culprit to be a condition known as fatty liver syndrome, sometimes called fatty liver kidney syndrome (FLKS) or fatty liver haemorrhagic syndrome (FLHS). It’s caused by metabolic upsets in the bird which make it lay down extra fat in the organs.

This can be due to:
• a faulty diet;
• the presence of moulds and toxins in the feed;
• birds overeating because the diet they are being fed is unbalanced or deficient. 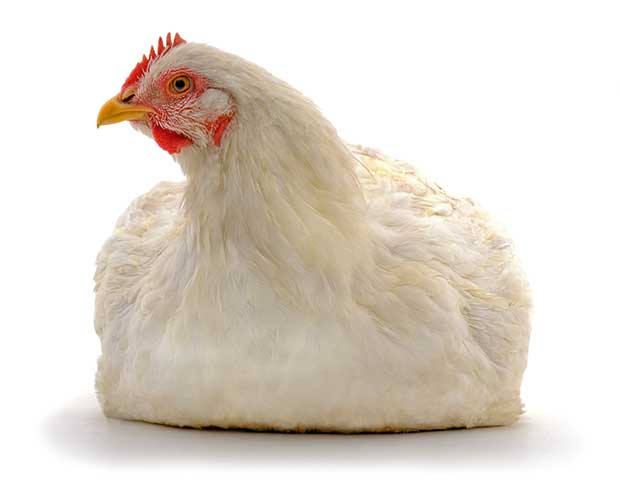 It can also be triggered by hot weather in birds which are laying at a very high rate. In this latter case, the production might suddenly drop off, or birds will be found dead with no symptoms but on post-mortem, large blood clots can be found in the abdomen, having come from the liver.

It’s not easy to put a chicken on the right diet yourself. Feeding a commercial diet which is specifically formulated for the age/type of poultry being fed is usually the safest path to follow. Things can easily go wrong if you’re supplementing this relatively expensive food with cheaper ingredients such as household or garden scraps, or cheaper whole grains etc. This can mean a balanced diet becomes imbalanced in terms of protein and energy, so the birds begin to compensate by eating more of one ingredient than they need in order to try and get enough of what is short. 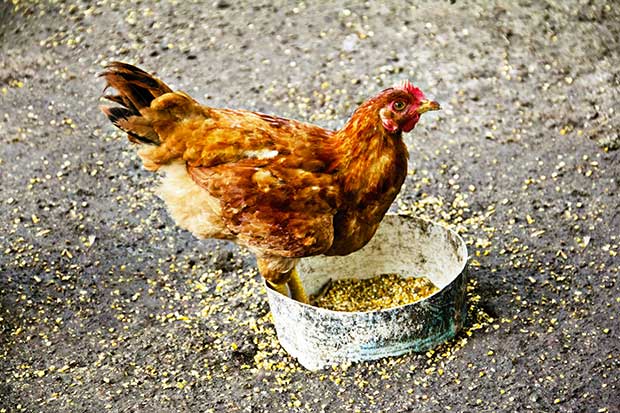 For instance, if you substitute half of a commercial layer diet with cheaper wheat, which is much lower in protein, the birds will only be getting about three-quarters of the daily nutrients they require. To compensate, they will eat more of the available food in an effort to gain the right amount of protein or energy. Surplus other nutrients are then converted into fat.  Supplementing a balanced diet may save you a bit of money, but there are other costs.

For example, hens will not lay to their potential if their bodies are not receiving sufficient nutrients to maintain reproduction and maintenance. If the birds are on an adequate free range with plenty of insect life around, they may do reasonably well. But if they are confined to a small bare earth run or a new patch of lawn each day, their health may be compromised, especially if the feed quantities on offer are restricted.

Bulking out part of the diet with kitchen scraps or vegetable peelings has the same effect. The nutrient level of these foods is not what birds need. This kind of diet is usually high in energy and low in protein. The result is the birds will eat more and store away the extra energy as fat, both around the abdominal organs and in the liver. In a heritage breed, especially a large breed, the extra carbohydrates may not matter, but it may still have an effect, with a fatter bird not laying as many eggs as it could. 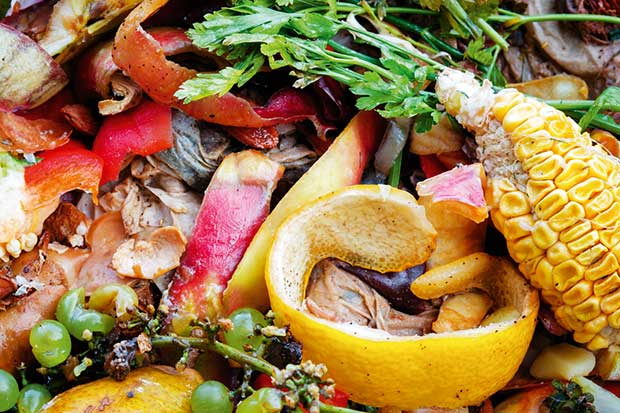 It tends to be worse for commercial hybrids like brown Shavers or Hylines. These birds are bred to have a smaller appetite and do best on a balanced poultry feed. If instead they get one low in protein and unbalanced in micronutrients, it compromises their ability to lay the numbers of eggs they are capable of laying. In the case of the people who wrote in, the clue to the possible cause of these odd livers was the feed: multi-pellets.

This is a common trap for many people with lifestyle blocks who own various species of livestock and want one feed which they can use for all their stock, whether it’s sheep, calves, horses or chickens. Several feed companies in NZ sell a multi-species feed, but these are designed to be a snack, not a complete feed for any species listed, and especially not poultry. Multi-pellets are made to a very general recipe and are often deficient in some nutrients regarded as essential for certain classes of stock. It may also have a coccidiostat included which is aimed primarily to protect calves from coccidiosis. But some coccidiostats can be extremely toxic to horses, and there is usually a withholding period on meat or eggs if you feed it to cattle or poultry.

If a feedstuff is intended to be eaten by ruminants like calves, sheep, and cattle, the protein source will be vegetable-based. But poultry need an animal-derived protein or at least synthetically-produced amino acids so they get critical nutrients including methionine and lysine. A bag of multi-pellets may say it’s 16% protein, but it is the wrong sort of protein for chickens. It might say it is suitable for poultry, but that doesn’t mean it should be the mainstay of their diet. 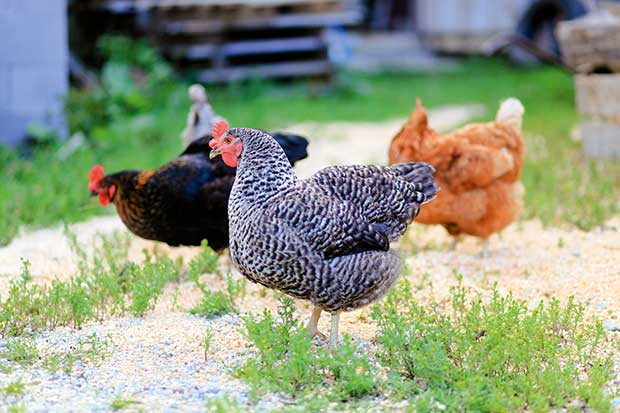 The people with the initial question did provide access to meat and bone meal to ensure the birds got the right type of animal amino acids, but that can be high in phosphorus, which then unbalances the calcium-phosphorous ratio, essential for proper bone and eggshell manufacture.

Another shortfall in this type of multi-species feed is that because it is primarily intended for ruminants, the vitamin/mineral premix in it is not likely to have choline chloride added. It is also debatable as to whether other vitamins – A, B, D, E and K – will be in it at a level essential for poultry. Even a balanced, complete poultry feed which is only missing choline can result in fatty liver syndrome. Finally, another possible cause of fatty livers can be aflatoxins. These are the toxic metabolites produced by moulds and fungi which can contaminate feed and damp litter materials. Some feeds are particularly prone to allowing mould growth when damp so the manufacturers add molasses as a key ingredient. Copra, the dried flesh of coconut after the oil has been extracted, is often used in the feed manufacturing industry and is known to have a high level of aflatoxins. 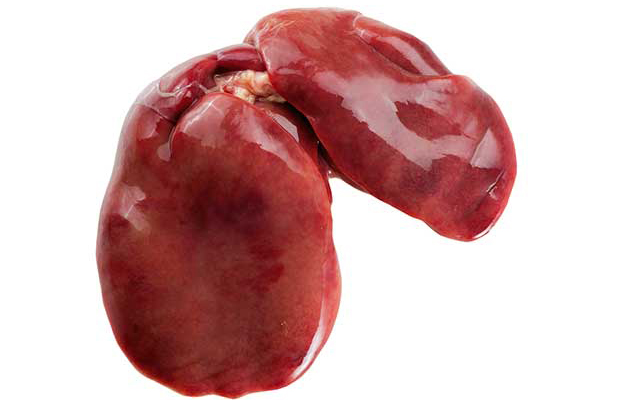 A normal healthy liver should have two lobes of an even colour. In chicks, the liver can often be a pale pinkish-yellow but it will get progressively darker red as the bird gets older. If the bird is tending to be fat, it can take on a patchy appearance of pinkish-yellow and reddish-yellow areas, especially in a young meat bird being fattened for eating. The liver lies over the other organs, beneath the breast bone. 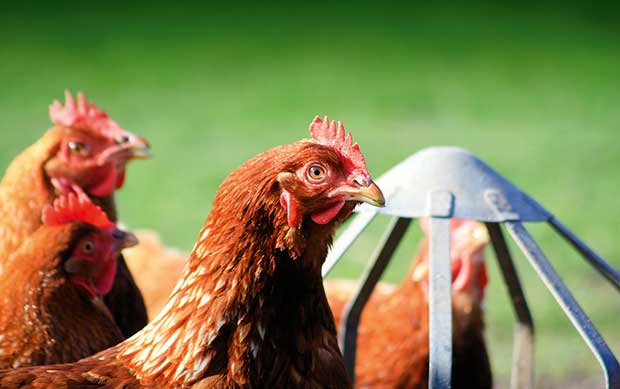 1. Check that what you are feeding your chickens is intended for poultry and their age group, eg chick starter, layer feed.
2. Feed them enough and don’t rely on free-range, whole grains or kitchen scraps to make up for perceived savings in buying ‘cheap feed’ – these should be a treat food, given at the end of the day after the bird has received a balanced poultry feed.
3. Birds with fatty livers are safe to eat unless they have already dropped dead from liver collapse or clots.
4. Sudden deaths, especially in apparently healthy birds, or in hot weather should always be regarded with suspicion – there is always a good reason and a necropsy may give you some clues.

WHY NOT JUST GET A LAB TEST?

When you want to get a lab test, it’s important to have some sort of an idea as to what diseases to test for. These kinds of specialist avian tests are expensive, so it’s unrealistic to test for everything. Any kind of lab tests would probably only be economically justifiable if it were a large commercial farm with many birds at risk.