There’s one key to growing a good leek crop, and Jenny finally feels the love.

Leeks used to be an afterthought in my garden. My lack of forward planning meant they were never a success. I would plant seedlings as soil temperatures nose-dived in autumn. They’d grow no more than pencil-thick and promptly bolt in spring. We never got a meal.

They were a waste of garden space, until last year, when I had one final try. I spotted a punnet in a garden centre in late January. Usually, I leave the plant to languish for weeks by the tap. This time, I planted them. For the first time that winter, the cook of the house had something new to experiment with, and we enjoyed a passable leek feast.

Once I mastered the timing, it was satisfying watching the leeks grow, knowing a good winter crop was in the bag, ready for harvest at a time when almost everything else in the garden is waning. The striking symmetrical leaves are a bonus. I have come full circle in my love-hate leek relationship.

Despite my skepticism and neglect, leeks have earned their place.

Leeks are one of the hardiest vegetables. The trick (as I’ve found) is they need up to six months in the ground. Leeks will stand, uncomplaining and undemanding, through winter, without protection from rain, hail, frost or snow.

They are more adaptable than onions, and not sensitive to short winter day length. Once you get the hang of growing them, they are a reliable vegetable from late autumn until early spring. You can harvest them right up until the ‘stem’ starts to become woody in spring as the flower stem forms.

More stories you might like:
Secrets from one of the most self-sufficient lifestyle blocks in New Zealand 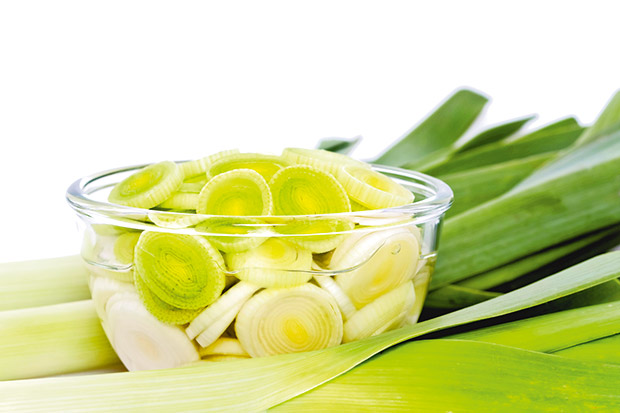 Leeks are versatile in the kitchen too; like onions, but with a more subtle flavour. They go well in stir-fries, casseroles, pasta, wrapped in suet pastry and baked, or even roasted. Leeks make wonderful winter broths, such as a classic leek and potato or leek and chickpea soup.

We love a wholesome, traditional cock-a-leekie soup incorporating a whole chicken, bacon, leeks, and whatever else you like.

■ In southern regions, if you want them to be a good size by winter, you need to have them in the ground in January. This means sowing in November for mid-summer transplanting. A February planting is usually too late – they will never size up.
■ I find it easiest to buy leek plants in punnets. The seed is quite slow to germinate (14-21 days), and since they must be transplanted anyway, there’s not much advantage in doing it yourself.
■ Plant early, feed well and keep soil moist during establishment.
■ Leeks prefer to grow quickly and thrive on a slow, steady stream of nitrogen, best supplied by animal manure.
■ Leeks don’t do well amongst weeds. I find it easiest to stay on top of weeds by shallow hoeing between them regularly.
■ Another option is to make the rows a little wider and intercrop Tom Thumb lettuces between the rows. They look attractive, cover the available soil, and give you an incentive to keep weeding.
■ My only other problem growing leeks has been birds digging up my nicely hilled plants. My leek-expert friend suggested the mesh recommended to protect potatoes from psyllids (available from www.bhu.org.nz). Otherwise, insect mesh from a garden centre over hoops of 15mm black alkathene pipe will do the trick.
■ Fifty leeks are plenty for most people, especially if you’re growing them to full size. There are 100 in my garden this year, and I’ve probably gone overboard.

HOW TO GROW LEEKS 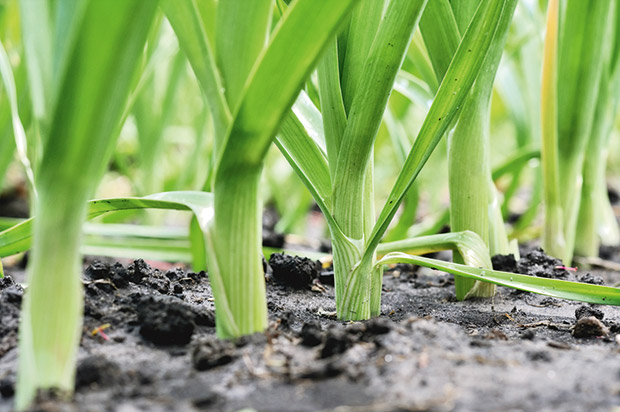 Transplanting: Transplant seedlings when they’re 20-25cm high. Water thoroughly, well before planting. Trim off a third to half of the leaf. Space 15cm apart in rows 30cm apart, for easier weeding. If you like small succulent leeks, space them at 7.5cm and harvest every other leek while they are small.

Blanching: To get the long, white stems, ‘blanching’ needs to begin when the seedlings are transplanted. Without it, the shanks will come out short and mostly green. There are two methods: 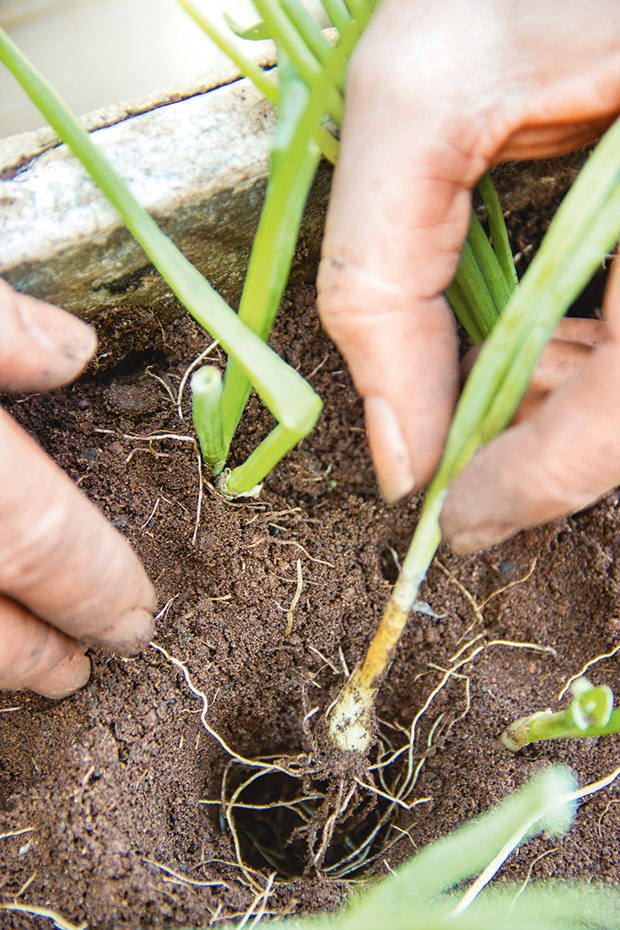 1. Use a dibber to dig a hole 15-20cm deep and drop the plant into it so the roots are resting on the bottom of the hole and the tips of the leaves are just showing above ground level. Water gently so the soil washes into the hole and covers the roots. Do not try to cover the roots with soil, or firm them in. Don’t worry if the leek doesn’t stand upright – it soon will. As the seedling grows, the hole will fill in by watering and natural erosion. This helps to thicken up the stems, and blanche them at the same time.
2. Dig a 30-40cm deep trench and fill it two-thirds full with a mix of manure, compost, and topsoil. Set the plants in 10cm deep holes in the bottom of the trench, so the roots grow into the enriched soil, rather than the subsoil below. When the plants are around 15cm high, push fine, dry dirt up around the stems, 5-7cm at a time, every so often. Avoid dropping soil between the leaves, and don’t ‘earth up’ too quickly or they may rot. Stop when plants reach maturity.

Harvest: You can start harvesting as soon as the shanks reach 1-2cm in diameter. If plants are started in early summer and fed adequately, they should reach 8cm diameter by winter.

Place a fork under the roots. Lever the leek up, being careful not to damage or break the stems. In spring, the remaining leeks can be dug up and heeled-in, in a cool, shady spot. This delays flowering, prolongs harvesting, and releases garden space for spring crops.

The secret to growing leeks in New Zealand

Take a leek & make a cake