Hearts of hemp: Why The Brothers Green have sown their faith in this protein-rich crop These three young men are cultivating a future in which more New Zealanders embrace the plant-based protein in hemp.

The Brothers Green are more related to hemp than each other, but they share a singular mission. Brad Lake, Michael Burnett and Brendon McIntosh have their eyes on a future that reinstates hemp, one of the past’s most significant and useful crops.

The plant has been cultivated since 8000BC to produce rope, oakum (a type of fibre) and fabric, in particular. However, early in the past century, confusion with its THC-rich cousin (cannabis/marijuana) and pressure from synthetic fibre producers led to its cultivation first being discouraged then banned. Later in the century, hemp began to grow back into favour as countries, including New Zealand, gradually recognized its many uses and reported benefits.

(There’s a growing body of scientific research into hemp but, as a starter, The Brothers Green suggest reading The Seed of Industrial Hemp [Cannabis sativa L.]: Nutritional Quality and Potential Functionality for Human Health and Nutrition.) The trio has contracted farmers in drought-prone North Canterbury to cultivate that growth in Aotearoa by sowing 85 hectares of the low-care, pest-resistant, soil-enriching, high-CBD and low-THC, carbon-absorbing crop. The harvested hemp is delivered to the company’s processing plant in Culverden, where its seeds are separated, then dried, pressed and packaged into various The Brothers Green products. So far, that range includes hemp oil, hemp hearts (the inner part of the seed), hemp protein powder, and a hemp oil-based skincare range called Kōaka.

The creation of The Brothers Green began in 2017 when Brendon, a pharmacist, was considering developing a plant-based protein supplement to replace those made with whey or imported pea, soy or rice protein. Then he had a conversation with a medical student.

“I’d been a pharmacist for four years, yet I still thought hemp was marijuana. But that med student educated me about the differences and the nutritional science. I was blown away at hemp’s protein level and that it has all 20 amino acids. I thought it would be the perfect plant-based protein-powder supplement.” 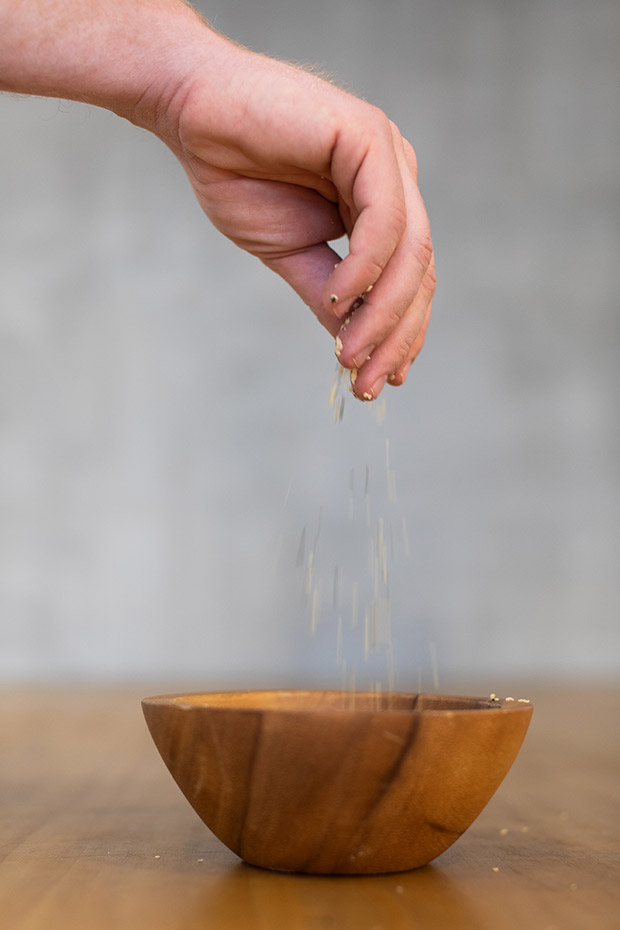 But there was a problem. In 2017, it was illegal to sell hemp-based food for human consumption (although owners could feed it to their animals), but it was legal to sell hemp oil pressed from the seeds. Brendon began making hemp protein powder and treats for dogs, which he sold at a Christchurch market.

Meanwhile, Brad, a rural banking portfolio manager, who was nursing a recurring rugby injury that required the long-term use of pain and anti-inflammatory medication, had begun studying aspects of nutrition and how most diets lack micro and macronutrients.

“We’re obviously unhealthy as we are the third-most overweight population on the planet, with the second-highest rate of childhood obesity, and many chronic diseases are lifestyle-based, coming from our food consumption.” Looking beyond his own body, Brad considered the environment. At the time, Canterbury was going through another terrible drought, and the bottom had fallen out of dairy prices. Through his work, Brad saw the exposure of New Zealand farmers to commodity prices and how little diversification there was on farms. His research into alternatives saw hemp popping up as a viable alternative. He wondered why hemp was “not a thing” in New Zealand.

Brad had heard about Brendon’s hemp products for dogs, so he turned up at Brendon’s flat one night to buy some. The two got to talking about food production, yarning long into the night about hemp and how they believed it could improve the health of New Zealand — the people and the land.

On the other side of the world, Michael was traveling, having quit his job in dairy operations. At the back of his mind was the goal of doing something to align his purpose and values. But what? His university mate Brad messaged with his vision for hemp. 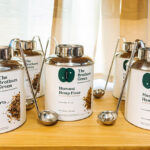 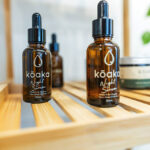 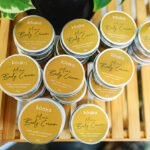 “I was ripe for the taking,” Michael says. “Brad convinced me that hemp was a good vehicle to influence agriculture in a way that aligned with my business and personal values.” Michael booked a flight home to join Brad and Brendon on their hemp mission.

Around that time, New Zealand’s food safety regulations changed — from late 2018, allowing the sale of hemp for human consumption. Ahead of that, the trio began refining a sugar-free hemp-seed snack bar that had been devised earlier by Brendon and Brad. The resulting Hempy Bars sold “well enough”, though they will be dropped from The Brothers Green range. Michael says that decision was huge, and they learned a lot from the Hempy Bars as they developed and marketed other The Brothers Green products. “The margins were too small. We want to focus on where we can make a bigger impact in offering a plant-based protein alternative with our other hemp products, which we believe will combat chronic inflammation. People who use hemp products love them. We hear a lot of success stories about it helping consumers feel better. But we need to change people’s perceptions about hemp.”

First among them were the men’s own families, including Brad’s. “It’s very difficult to get hemp across the line for a typical New Zealand family, where meat and three veg are their staple. But now both my grandmas are taking a tablespoon of hemp oil a day,” Brad says, adding that one had issues with inflammation and stiffness that stopped her walking far, but after taking hemp seed oil for two months was back walking happily on garden tours.

That’s The Brothers Green’s motivation — enticing people to try a protein that’s tasty, versatile, natural and plant-based, says Michael. “Ultimately, we want people eating some hemp each day, as they think about how to reduce the processed food in their diets.”

If the law allowed, the whole hemp plant could be harvested for all sorts of nutritional goodness. But, currently, only the seeds can be sold as food. Fully grown hemp plants stand two metres high when ready for harvest and yield about a tonne of seeds per hectare. Once threshed at The Brothers Green’s processing plant, they are dried, dressed, cleaned and stored until needed for processing.

More stories you might like:
How a former shearers' cookhouse on the East Coast became a peaceful bach escape for the Shanks family 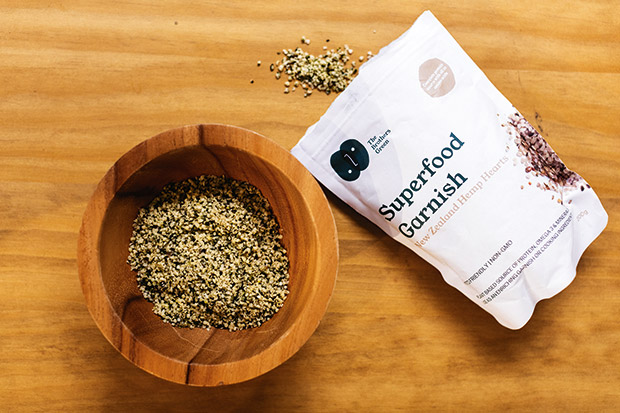 That starts with the smaller dried hemp seeds being sieved off and cold-pressed for their viscous, lime-green oil, which is packaged for consumption or made into The Brothers Green Kōaka skincare products. The “cake” — the seed remnants after pressing — is then put through the mill to become protein powder. 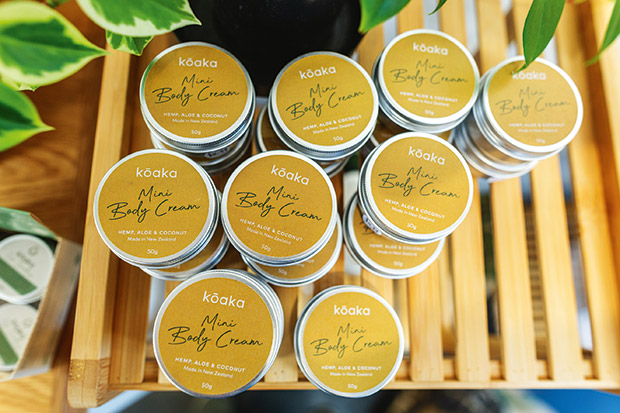 Larger seeds are dehulled, and the inner heart of the seed is sold as a “garnish” to add to cereals, bakes, sauces and salads. This recipe comes from plant-based café Gre3n Superfood & Juice Bar in Christchurch, and uses vegan ingredients, which can be substituted for dairy.

Heat oven to 200°C. In a bowl, toss potatoes and kūmara with olive oil, salt and pepper. Transfer to a roasting dish and cook until soft. Once roasted, set aside and allow to cool.

Heat the butter and a splash of olive oil in a pan until hot and then add the corn and cook until slightly charred. Allow to cool.

When the vegetables are cool, add to a mixing bowl and combine with shredded cabbage, baby spinach and cherry tomatoes. Mix dressing ingredients together and season with pink himalayan salt and cracked black pepper. Pour over vegetables and combine well.

Serve individually or pile onto a platter. Top with hemp seeds, sprouts, pickled onions, and drizzle over olive or green-herb oil. Serves: 8 to 10