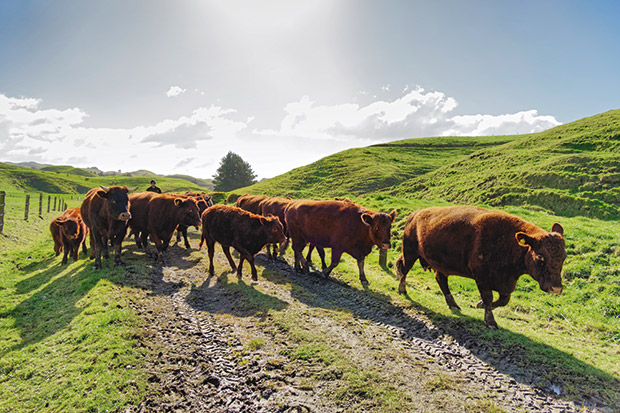 Red Devon are one of the world’s oldest breeds of cattle and a good option if you’re new to cattle.

Cattle can be intimidating for people new to a block who are not used to being around large animals.

A well-mannered breed was essential for former dairy farmers Karen and Bob Schumacher when they were looking for a beef breed to join their grazing operation. They looked at many options, but kept returning to the Red Devon’s gentle temperament. It was especially important to Karen who would be the one handling them most on their large grazing block.

“I just felt that the Angus bulls, as wonderful as they are, were just too bolshy for me,” says Karen. “The European breeds were too big. We weren’t interested in any breed that was big and ‘framey’ and took an extra year to grow out to prime.” 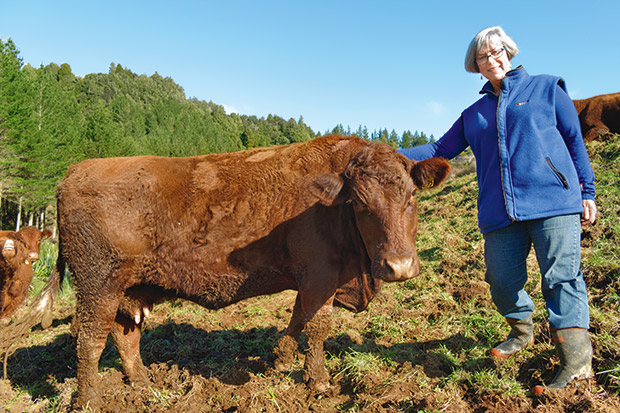 Karen Schumacher and #295, who came looking for help during a difficult calving.

They would also be keeping bulls. The last thing you want, if you are aiming for harmonious neighbourly relations, is for your bull to go through a fence seeking a midnight tryst with the neighbour’s cows.

“Red Devons don’t put pressure on fences or dig bull holes like the large breeds do. The bulls aren’t forever smashing through fences to get to one another or trying to destroy your yards.”

Karen has found the more Red Devons are handled, the quieter they become. She and Bob can now shift their stock by calling them, including the bulls; calves learn the rules from their mothers.

Karen says the breed’s placid temperament was evident during their 2017 calving season. #295 is an old cow, a bit bossy, and the herd matriarch. One day, when Bob was checking on the cows due to calve, #295 marched around the hill, stopped in front of him, and demanded help. 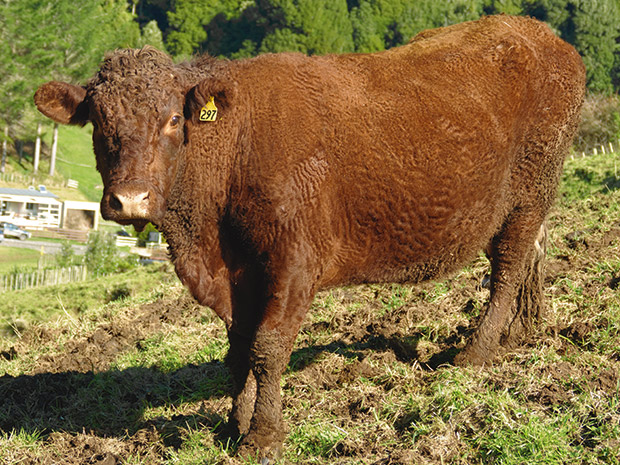 One of the Schumacher’s Red Devon cows.

“She knew she was in trouble,” says Karen. “She just looked at Bob and let out a bellow that was like ‘help me!’ Then she just stood there while Bob tried to calve her in the middle of a paddock.

More stories you might like:
Things to do on the farm in January: Treat sheep and alpaca for facial eczema, spray chicken coop for mites, get fire insurance

“He was up to his shoulders inside her trying to get the calf out. The calf was at a slightly wrong angle. They are usually such good calvers and mothers, and this is the only one we’ve ever had trouble with.

“Such was her temperament… every time he pulled, she would look around and let out the little moo that they do for their calf as if to say, ‘well ok, where is it?’ 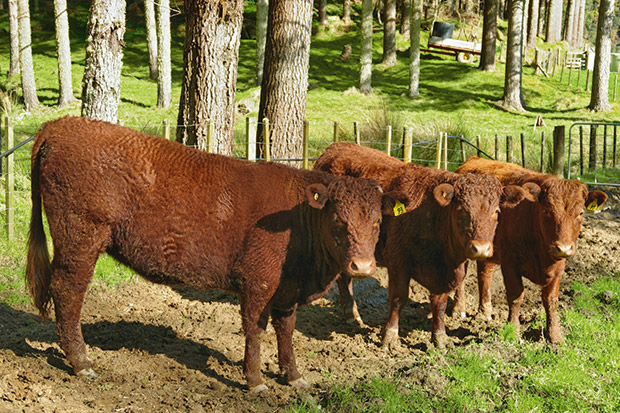 “Each time she let out that ‘moo’, Bob would tell her, ‘I’m still trying’, because you find yourself talking to them to comfort them. We had to bring her down to the yards to calve her, but it’s a testament to the breed’s temperament he was able to do that standing in the middle of a paddock.”

Another useful trait is the cows will happily feed any calf that wants to suckle. It’s common to see an ‘aunty’ feeding another cow’s calf.

Red Devon are exceptional foragers. If the weather is dry and the going gets tough, they seem to flourish on very little. The Schumachers calve their cows in autumn; by the end of winter they notice that they are a bit leaner than normal, but to other farmers they still look rotund. 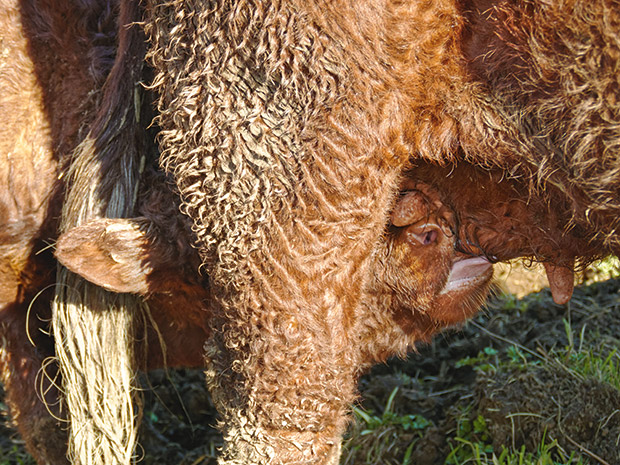 A calf on the Schumacher’s farm suckling one of its ‘aunties’, not its mother.

Karen says the breed is very hardy, their heavy coat allowing them to cope easily with inclement weather. Except for their initial vaccinations, the Schumacher’s animals rarely see a vet. Once their vaccinations are complete, they don’t need to be drenched again.

“Red Devons are a beautiful animal with a ‘blocky’, balanced look,” says Karen. “I love how on a sunny day their red colouration makes them disappear into the deep shadows, and then suddenly you see their bright pink noses.”

The Whittington family mate Red Devon bulls over their dairy heifers. They like the breed’s size which ensures the young females have easier-to-birth, smaller calves. The Whittingtons (and Schumachers) don’t need to feed out any supplements
over winter to their cattle, except for their autumn-calving cows.

John Whittington says it can be difficult to explain to those who have never grown their own meat, the sense of pride and accomplishment that comes eating premium quality meat from your own property. 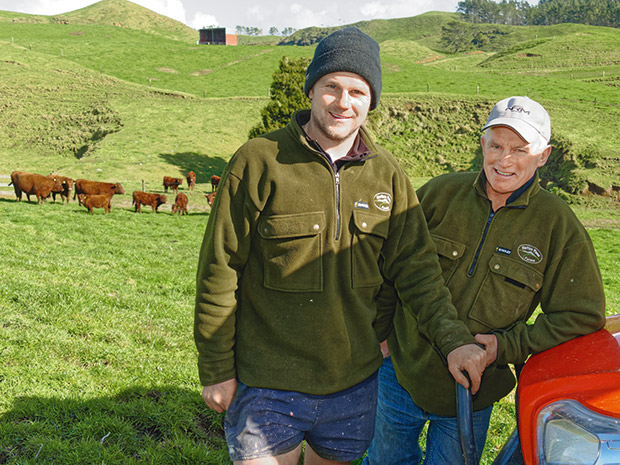 “Red Devon beef is the best beef I’ve ever eaten.”

One of the big advantages is the amount of meat you get out of the animal once it is processed. The NZ average ‘dressing out’ figure is 45 percent, but this includes non-beef cattle breeds. For specialist beef breeds, it can be 50-55 percent.

“The bulls we send to the works yield around 58 percent of their live-weight; the best yield was over 60 percent which is very high. Their live-weight may not be as high as some beef breeds, but their high yield makes up for it at processing. Also, their grass-to-meat conversion rate is superior to most other breeds.” 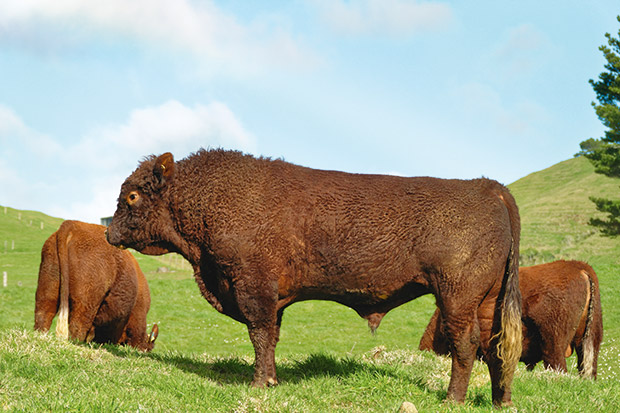 He says their laid-back temperament makes them ideal for anyone new to cattle. “They’re very friendly and easy to tame. They’re a good breed for those without a great deal of experience with cattle.”

His father agrees. “A lifestyle block owner with 8ha (20 acres) could run 10-12 cows and have 10-12 replacements every year,” says Barry Whittington. “You could have 35-40 head of stock… for that sized property.

“You’d have the option of selling the bull calves to a dairy farmer for them to use to tail-end their herd or for putting over their heifers. Equally, you can steer (castrate) them and grow them out to prime and sell them for $1800-$2000 (at the time of writing) each.”

ABOUT THE RED DEVON

Females: 650kg
Bulls: 1000kg
Height: up to 130cm at the shoulders (vs 150cm or so for Angus)
Colour: deep ruby-red coat
Horns: naturally horned but most registered cattle are now polled (hornless)
Temperament: generally docile and placid

Red Devon are feed-efficient, medium-sized beef cattle, smaller than many of the modern commercial beef breeds which tend to be heavier and have thicker, denser bones.

The breed was first developed in Devonshire, UK, as dual-purpose milk and beef cattle, and were brought into New Zealand during the 1850s.

They’re bred to be hardy, good ‘do-ers’ during phases of poor feed or when grazing on hard country. If well fed, they can reach their finishing weight 12 months faster than other beef breeds.

“We’ve only ever eaten Red Devon beef since we began farming them and love its flavour, tenderness and marbling,” says Karen Schumcher. “We have a walk-in chiller and hang our meat for three weeks. The corned beef is to die for. 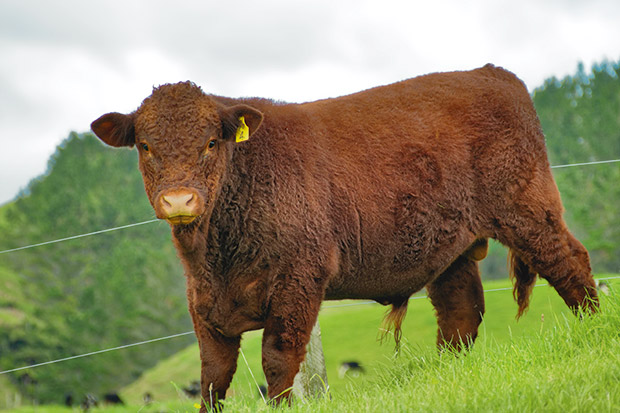 A Red Devon calf on the Whittington’s farm.

“Red Devon beef is the meat of choice for many top New Zealand and UK chefs.”

New Zealand Red Devon genetics are some of the purest in the world. New Zealand bulls are highly sought-after because they are smaller and closer to the original breed standard. Semen from New Zealand bulls has been sent all around the globe, even back to the UK.

They’re popular because the New Zealand Red Devon Cattle Breeders Association doesn’t allow any crossbreeding into the national herd. In the UK, the breed has Saler (pronounced ‘Sa-Lair’) blood in it.

“You know immediately when you go into a UK herd with Saler bloodlines because the cattle instantly put their heads up and run away,” says Karen Schumacher. “That doesn’t happen in our herds. We’ve been very diligent to try and ring-fence (the bloodlines).

“If you buy from a member of our association you can be assured of getting a purebred animal.”

There is no minimum number of animals needed to register with the association. It runs field trips and farm visits, and members share their knowledge with each other.

The association is now developing a long-term semen bank which would play a vital role in case of a serious bovine disease outbreak.