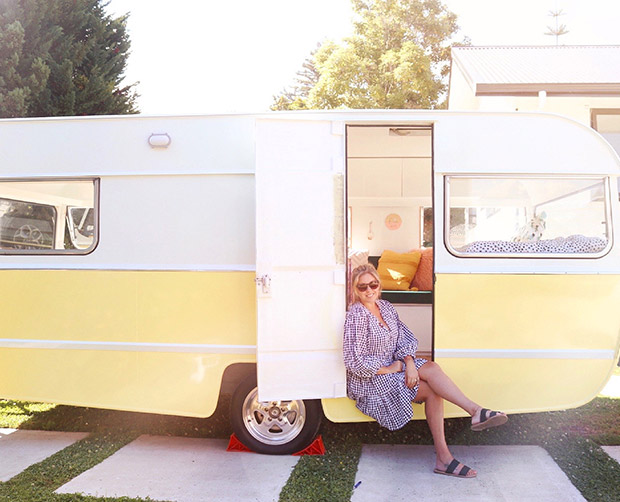 Mel Brown with an official member of the Brown family, Lola the caravan.

Lovely Lola the caravan ensures the Browns relax in colourful comfort whether by the beach, the lake or in the bush.

Mel Brown’s childhood summers were spent camping. Her husband Jason summered at the family beach house. No longer keen to camp, and yearning for the freedom to visit wherever they fancy, a caravan is the perfect compromise for this Morrinsville couple and their daughters, Marissa (14) and Trelise (11).

Lola – a renovated 17-foot 1969 Silverstream – is Mel and Jason’s second caravan. Poppy, a 1965 Liteweight Silvermist, was their first, a birthday present for Mel four years ago. Jason, a boatbuilder by trade who now runs the Morrinsville ToolShed (a very handy husband to have), restored Poppy and the family holidayed with her for a couple of years. 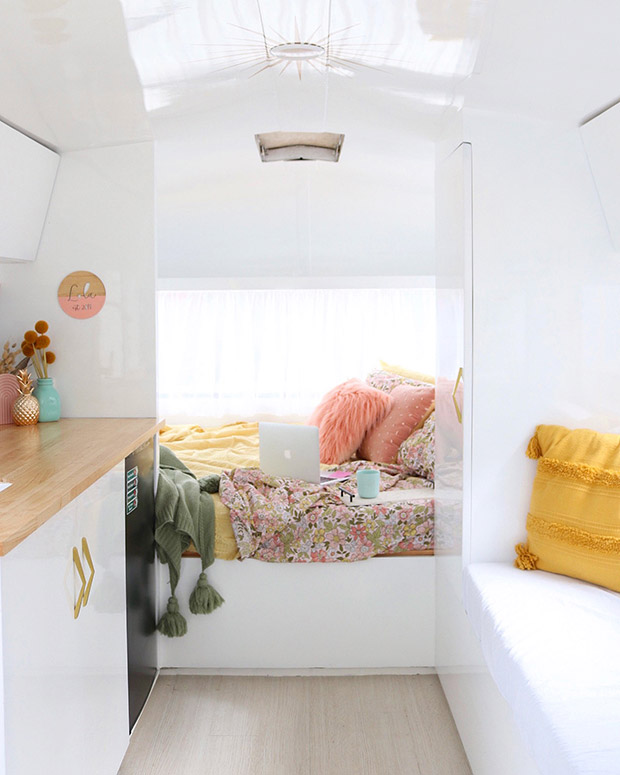 However, with her timber interior, ‘lightweight’ Poppy was not. Nor was she quite spacious enough for the four of them, especially when Marlo, a pomeranian-german spitz, joined the family. So, with many tears, Mel and Jason sold her to a happy buyer, and planned another do-up.

“We found Lola in Tauranga in a caravan graveyard,” says Mel. “There were about 300 caravans there, all ex-hire vans from the 1980s. She had been sitting in a paddock for about five years, so it was going to take more than a coat of paint to make her pretty.

“The floor was rotten and she needed a completely new chassis, which Jason welded. We could have saved some of her original features, but it was best to strip it out and start again.” 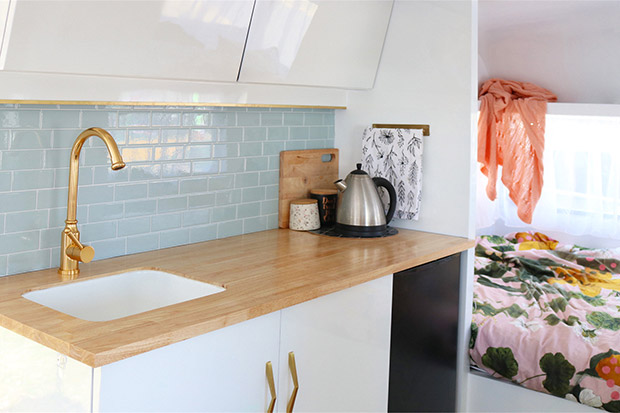 Then, like many DIY projects, Lola languished on the couple’s driveway. But with summer 2019 approaching, Mel gave Jason a deadline – cementing it on her Instagram page – and Poppy was done within three months. Jason made the door for Lola the morning they left on holiday.

Mel says, as much as she loved Poppy, she wanted Lola to be different. “That included a top requirement that Lola have a permanent bed, rather than us having to convert the two couches every day. That gets very tedious. But we still wanted a couch, so, as Lola is a bit bigger than Poppy, we have a bed and a couch to sit on if it’s not so nice outside.” 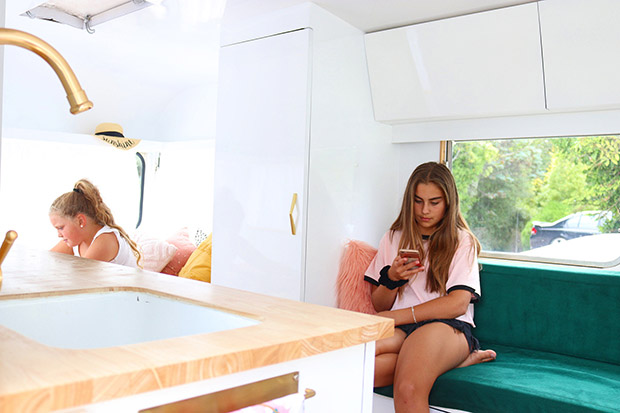 The caravan comfortably fits the entire family, including daughters Trelise (11) and Marissa (14), and their pooch Marlo.

The result is a pristine bright-white interior, with heaps of vibrant highlights. Cushions of all hues call for long lounging afternoons, sunbursts reflect the light, and – is that a gold tap? In a caravan? “Yes, it is. And I got it really cheap off Wish.com!” says Mel.

“I also wanted a white sink. I know it’s not practical, but it’s beautiful. So, Jason made me one.”

Mel says Lola’s design is a good balance of “pretty and practical”, including the easily cleaned green couch. “I like to change things and in a small space you can do that easily, especially with colour furnishings. I follow a lot of accounts on Instagram for other caravan renovations. It’s huge in Australia – everyone’s doing up a caravan there – but they’re all the same. They’re all variations of white with rattan cupboards, and that’s not us.” 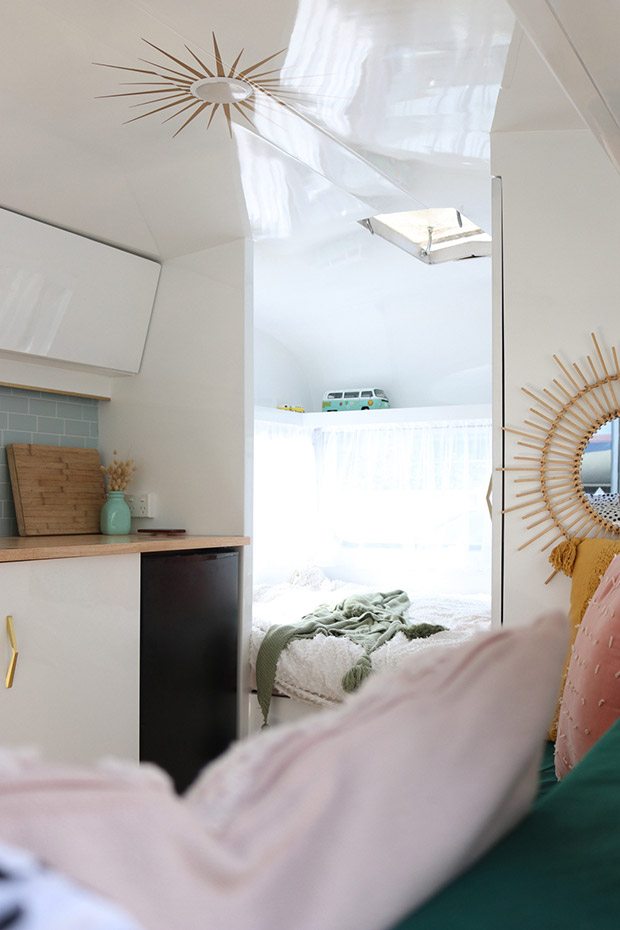 This summer Lola is sporting a new exterior paint job, having swapped her ageing mustard for a youthful yellow. “We were tossing up whether to paint her black and white, but I wanted yellow. Yellow was my youngest brother’s favorite colour, and he passed away 14 years ago when he was three and a half. Yellow reminds me of him,” says Mel.

Sadly, not every caravan lover has a Jason to carry out the handiwork, right down to the fiberglass interior, the same as used on boats. Or, indeed, a Mel, whose interior design has attracted quite the Instagram following (although her full-time job with School Kit, producing school resources, gives Mel less social media time these days).

With Jason doing the work himself, they spent approximately $10,000 to do her up, on top of the $4000 purchase price. After all that effort, they’ve fashioned a caravan that’s comfortable, highly specced and eye-catching. 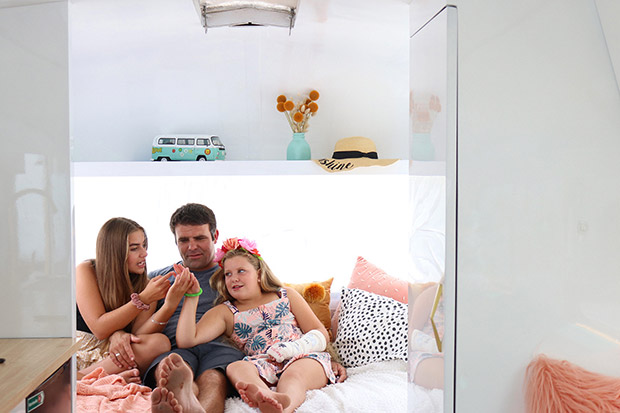 “We often get people knocking on the door, asking to see inside her,” says Mel. They’re especially taken with the bunks, which the girls also love. They’re full-sized single beds, and Trelise loves being underneath in her cubby hole, with Marissa on top. That bottom bunk is well ventilated and is actually the coolest place in the caravan. In summer I often find Jason down there having an afternoon nap.”

So far, after two summers and preparing for her third, Lola has been to the Blue Lakes, Taupō and Ohōpe, and this summer is heading to Gisborne, then around the East Cape to Ōhope. For the rest of the summer, she’s likely to be parked at Jason’s parents’ beach house at Whangamatā.

With Lola, the Browns love they still feel the camping vibe and the freedom to experience new places each year, without the fuss and bother of a tent. “With a caravan, we just arrive, erect our awning and we’re ready to relax,” says Mel. “Then we sit back with a cold drink and enjoy watching the neighbouring campers working for hours to pitch their tents.” 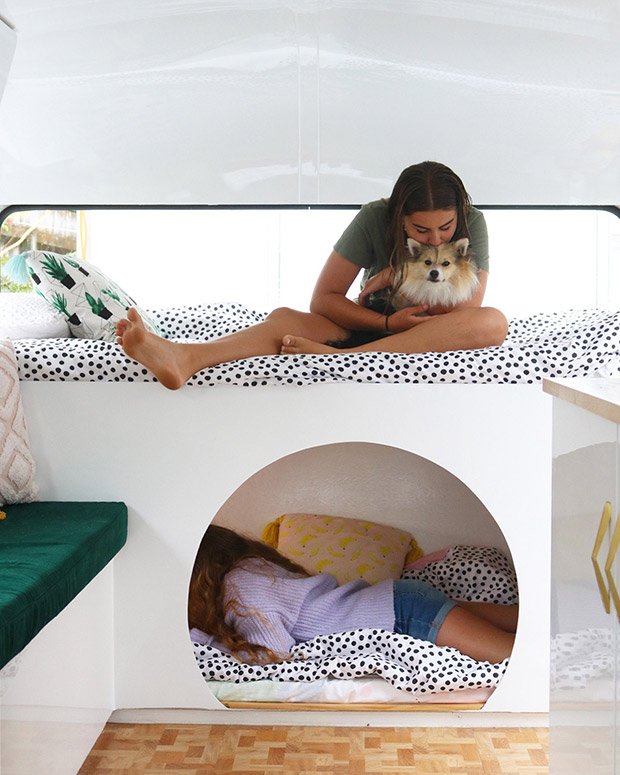 The bottom single bunk — equipped with a cubby hole — is well ventilated and the coolest place in the caravan.

Whether away on summer holiday or parked up at home, serving as a home office during a lockdown, Lola is Mel’s happy place.

“We sold Poppy, but we won’t be selling Lola. Even if there may be a price for everything, Jason doesn’t have another caravan in him, so she’s staying. Anyway, she’s part of the family.” 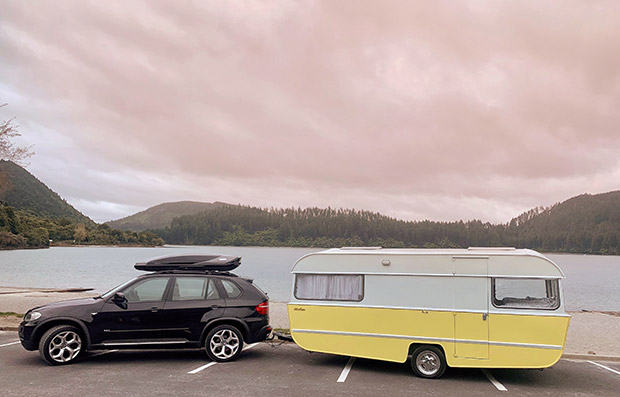 • Think of a budget, then double it – Everyone’s into caravan renovations these days, so caravans aren’t the cheap project they may have once been. Mel says expect to pay a lot, even for a do-up.

• Look carefully underneath – Check out the chassis before agreeing to buy, as chassis are expensive to fix or replace and an old caravan will likely have a faulty chassis.

• Check for water damage in the interior – Water damage can’t be easily fixed or covered over with a coat of paint, so if there’s water damage a total interior renovation will be required.

• Look for storage wherever possible – Mel and Jason’s bed headboard can store their bedding, and they have a shoe rack at the end of the girls’ bunks. “That’s one of the best things we put in,” says Mel.

• No need for a table – Lola doesn’t have a space-sucking table as the Browns find they always eat outside. If it’s wet, they eat under the awning or bring their outdoor table inside.

• Make room for a coffee machine – Being on holiday is no reason to forgo good coffee, says Mel.