Fresh apples and creativity are at the core of this reinvention of a spicy classic.

Sugar and spice, and bubbly goodness over ice — that’s what ginger beer is made of. As for the exact recipe, well, it depends on who you talk to. Jody Scott, head cider-maker at Zeffer Cider Co in Hawke’s Bay, didn’t think twice about spiking his ginger beer with what he makes best.

There was a time when ginger beer was considered an intoxicating tipple. Back in its Victorian-era heyday, the fermented drink packed a perilous punch, with up to 11 per cent alcohol by volume. British excise tax laws of the 19th century encouraged less alcoholic iterations, eventually leading to the virgin fizzy drink known today. Jody’s spiced-up drink, which uses a barely detectable apple cider base, tastes like ginger beer. It looks like ginger beer. But bringing Zeffer’s Alcoholic Ginger Beer to the market, let alone explaining how it fits in with the company’s range of ciders, was a bit like having a ginger sibling in a brood full of blondes — same genetics, but visibly the odd one out.

“It’s always been a bit of a dark horse,” says Josh Townsend, Zeffer’s CEO. The fiery drink was left on simmer until it landed on the top 30 list at the 2021 New World Beer and Cider Awards — five years after it launched. Dark horse, indeed.

The prospect of creating an award-winning beverage without its signature cider flavour would have seemed mad in Zeffer’s early days. In 2008, winemaker Sam Whitmore and Hannah Bower created their flagship cider after tasting dry-style varieties in Europe. Based in Makatana, the couple began brewing in their shed and selling at the local farmers’ market under the label Zeffer Cider. 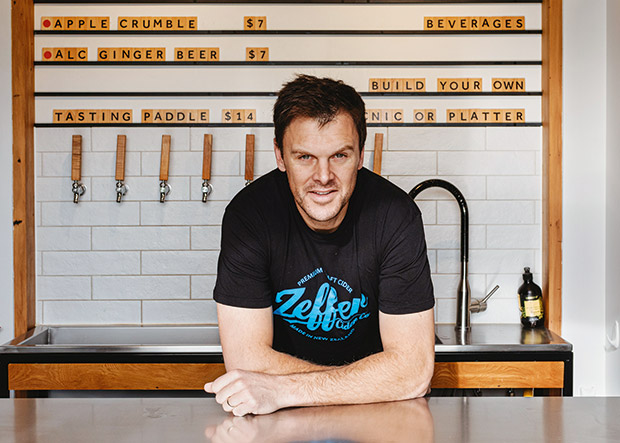 Josh at the Zeffer Cider Co taproom in Fernhill.

One crisp morning, Josh strolled up to their stall and took a swig. “I had very limited knowledge of cider back then — I thought it was all sickly sweet. What Zeffer offered caught my attention,” says Josh. The professional rugby player had no experience running a small business when he asked Sam and Hannah if he could join their team. In 2012, the Zeffer duo became a trio.

Josh adopted a jack-of-all-trades spirit and upskilled fast. Buying a trolley was a financial stretch in the early days, so he would lug kegs of cider by hand and store them (“perhaps against body corp rules”) in his apartment car park in Auckland. “We would lift about eight kegs of cider from Sam’s car into mine, and that would be our supply for the coming week,” says Josh. Over the next five years, the trio expanded their small-batch cidery into a brand that gained favour at Farro Fresh stores throughout Auckland. Josh kicked things into gear with a nationwide distributor, followed by a deal to send a six-metre container of cider to the United States.

In 2017, the team reshuffled. Sam stepped down as cider-maker; Hannah moved into human resources. Josh was tapped to steer the cider brand upwards and onwards. That year, Zeffer scaled up by moving operations to a new cidery and public taproom in Fernhill, a 10-minute drive from Hastings and in the heart of apple country. Fresh apples are at the core of Zeffer’s cider making. Culinary apples such as braeburns, royal galas and granny smiths are crushed by local apple processor Cedenco before being fermented for three to four months — up to two years for some ciders — at the Zeffer cidery. Over the years, the brand has expanded its portfolio with sweet, spicy, and fruity cider infusions that are added after the fermentation process.

“I believe making cider from fresh apples, as opposed to apple concentrate, has driven our growth over the years,” says Jody. “Using concentrate produces a high ratio of water; using fresh apples retains a fresh flavour.”

Jody, who hails from the cider region of Devon in England, can spend days experimenting with yeasts and flavours in his cider-making laboratory. But it was Josh who first suggested making ginger beer. He and Jody agreed there was fun to be had in a moderately alcoholic (4.5 per cent ABV) brew. For a hot and zingy result, Jody settled on a combination of fresh ginger pulp, ground ginger, and a “secret blend” of spices. Ginger is added in several stages to a neutral cider base over a two-week fermentation period. “I selected apple varieties and yeast that created a more neutral flavour. Ginger is the hero — the cider just gives it structure and alcohol. I didn’t want it to taste like fruit juice with ginger,” says Jody.

The cider-maker is no stranger to shaking up the beverage industry — sometimes, completely by accident. When Jody whipped up a batch of cinnamon-and-vanilla spiced cider for the 2016 GABS Craft Beer & Cider Festival, it wasn’t supposed ever to leave the festival. Popular demand dictated the Apple Crumble Infused Cider be bottled as a part of Zeffer’s core range; it is now one of its top-selling products in New Zealand and Australia. “We certainly stumbled into that one,” says Josh.

That’s not to say that Zeffer lurched into becoming the nation’s fastest-growing cidery. In 13 years, the company has grown into the largest independent cider-maker in New Zealand. “Staying present on the nationwide supermarket shelf is a never-ending battle. It has taken a huge amount of work to stay relevant and consistent,” says Josh. By the end of 2018, Josh and his team raised more than $3.6 million in capital funding to support its growth and expand Zeffer’s nine export markets, including the United States, China and Australia. Australian customers, particularly, have demonstrated an appetite for Zeffer’s creative infusions.

Recipes are supposed to be tweaked, refined and improved over time. Zeffer’s recipe for success, such as using cider to make hard ginger beer, is no different. The company’s point of difference will always be using locally grown apples, says Josh, but that doesn’t mean Zeffer will always stick to cider in its purest form. Zefferʼs taproom and bar is located at its cidery in Fernhill, Hawke’s Bay.

In 2020, Zeffer hopped on the sparkling seltzer train with a range of low-calorie drinks that combine sparkling water, fresh fruit and cider. Recognition at the 2021 New World Beer and Cider Awards for its Alcoholic Ginger Beer — the company’s first non-cider — is perhaps a taste of what the future holds.

Says Josh: “We still have work to do in New Zealand to get Zeffer into every supermarket around the country, but we hope to extend the brand into different categories. Those products may utilize our apples, but they may not.”

GINGER BEER: BUG OR NO BUG? Ginger beer first emerged as a fermented drink in Britain in the 1700s. The rawest form of ginger beer is still made via fermentation, in which a “bug” of lacto-fermented ginger eats through the sugar content and produces natural carbonation.

Its exact definition, however, can prompt a heated debate, depending on the crowd. Some beverage companies make ginger beer without fermentation, instead using ginger flavour and soda water.

Jody creates Zeffer Alcoholic Ginger Beer in two stages: the fresh-pressed apple juice is initially fermented with yeast in steel tanks, with fresh and ground ginger added during a secondary ferment. Ginger is added at three points to give the beverage a throat-tickling heat and complexity. zeffer.co.nz