10 glorious gardens to explore around the North and South Island 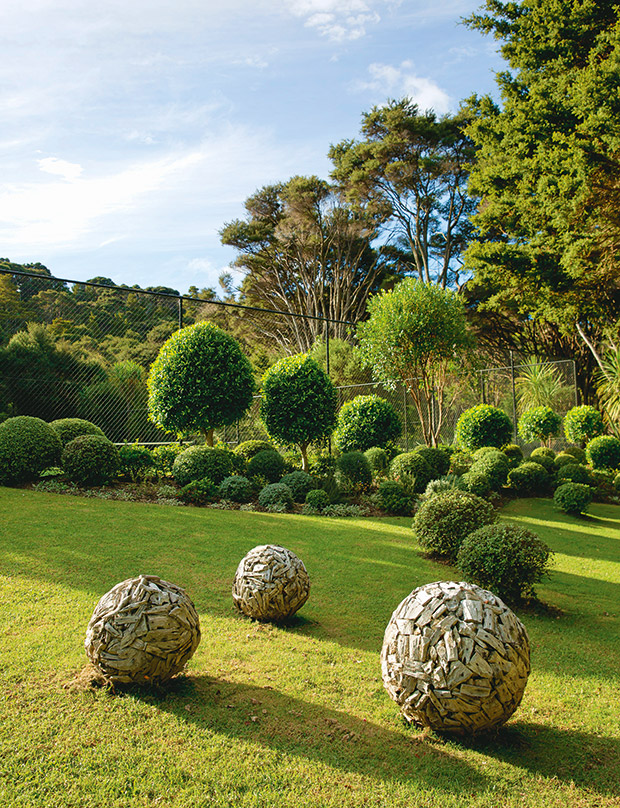 Connect with nature’s healing powers in spaces as spiritual as ancient churches when visiting the country’s many open-to-view gardens.

Exposure to nature is linked to a host of benefits, including improved attention, lower stress, better mood, reduced risk of psychiatric disorders and even upticks in empathy and cooperation. The American Psychological Association Journal reported this in 2020, stating that time in nature can improve mental health and sharpen cognition. For children, having access to green open spaces seems to promote cognitive development and self-control. At the onset of the pandemic, much attention was focused on elevating a sense of wellbeing and minimizing stress for obvious reasons. The nation’s gardeners probably didn’t need reams of academic research to formalize what they’ve known in their souls for decades: getting out into nature is good for the mind, soul and body.

A pathway along the length of our long, skinny country from the top of the Far North to the bottom of Southland is strewn with accessible and beautiful gardens open for a minimal fee. No matter where one is in the country, there will be a garden to visit somewhere close by, with the bonus of a passionate gardener to meet. Here’s a selection to enjoy while topping up the health and wellbeing fuel tanks. 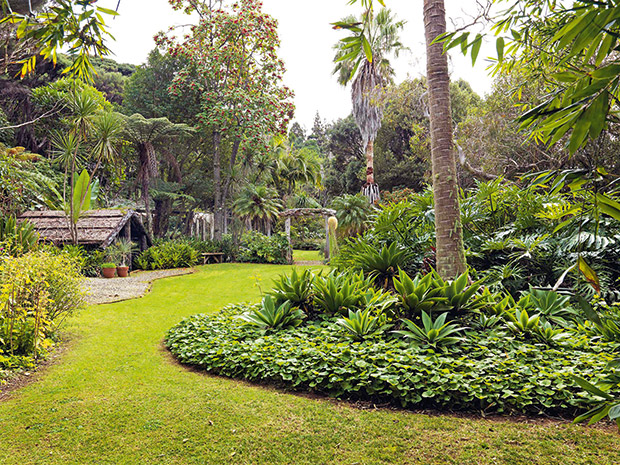 This Far North garden is among the first planted by 19th-century European settlers who arrived in New Zealand seeking resources to ship home or souls to consign to their Lord. Captain William Butler was a whaler who came ashore, married and planted trees. Today, Butler Point Garden encompasses an ancient Māori hilltop pā site, a whaling museum and magnificent 170-year-old trees planted by William and his wife, Eliza, including a Magnolia Grandiflora, a fig, and olives.

It is a place to meaningfully connect with early colonial history and admire the care bestowed upon the property over the past five decades by the current owners. Visitors, by appointment only, are encouraged to take a picnic to enjoy in the ground after the conducted tour of the whaling museum, historic house and beautiful seaside grounds. 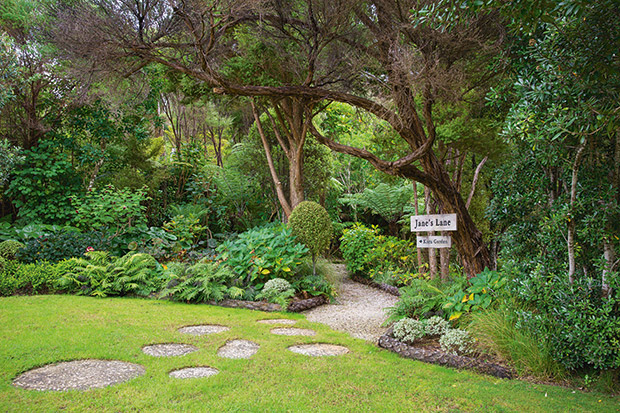 Statuesque giants, remnants of the temperate rainforest that once clothed the entire northern island, still rule tranquilly along some stretches of the seaboard north of Auckland. Under the calming influence of ancient pūriri, tōtara, rimu and kauri, this gardener has the upper hand on nature — only just. Clipped balls of native plants such as hebe, marbleleaf and pittosporum stand formally alongside introduced plants that run in vast swathes beneath the towering trees. These plants may look as though they’ve made up their minds to be here, but oh no, they’ve been carefully planted 400 or 500 at a time to look as though they just meandered in. 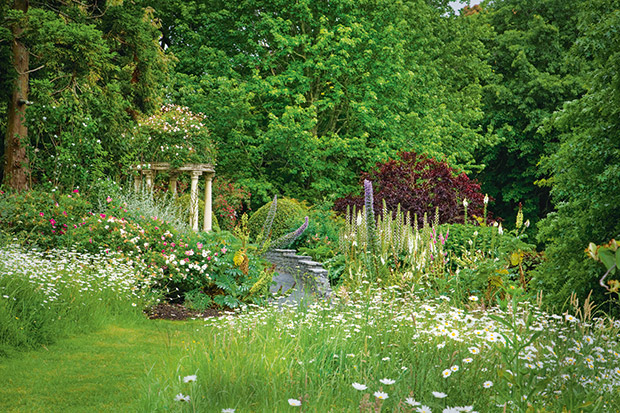 Streams rush between fern fronds and cascade over rocky falls; white-trunked lemon-scented gum trees tower above rockery gardens of fiery-faced flowers. The lily ponds are still and deep alongside the knobbly knees of swamp cypress, while roses and delicately hued annuals have their moment of glory, as does a meadow of wildflowers and a grove of citrus. And all the while, white swans and waterfowl drift about their daily business on a considerable wetland fringing the ocean.

This expansive garden feeds the soul of its creator — an artist — whose five decades of daily devotion have seen it emerge from bare paddock into a garden celebrated internationally. Its many paths, wetland boardwalks and seats, vistas and secret spots uplift the soggiest of spirits and are revered, by many, as a healing place. It is splendid in autumn with the liquidambars in full glory running their colour in rivulets down the gully sides. In spring, it’s very pretty, with blossoms cascading gently about the gardens. And, in winter, it is impressive with the bare trunks of the deciduous trees showing off their stature.

125 Potts Road, Whitford. (09) 530 8706, ayrlies.co.nz. Open by appointment (closed on Sundays); Whitford is 45 minutes’ drive southeast of central Auckland. It is easy to spend hours wandering these leafy lanes and resting on the well-placed benches. The historic Gwavas Garden Homestead, built in 1890 and brought back to life by Phyllida and Stuart Gibson after being empty for 45 years, is surrounded by a nine-hectare woodland garden. The oldest trees were planted by Phyllida’s great-great-grandfather, Cornishman Major George Gwavas Carlyon, in the 1860s. His son, A.S.G. Carlyon, initiated the planting of the garden proper 20 years later and modeled the grounds on his family home, Tregrehan in Cornwall. This is where the Carlyon family has lived since the mid-1500s, and it is today owned by Phyllida’s brother Tom Hudson. Gwavas Garden is a Registered Group of Historic Trees with the Royal NZ Institute of Horticulture and is recognized by the International Dendrology Society with a distinguished merit award. 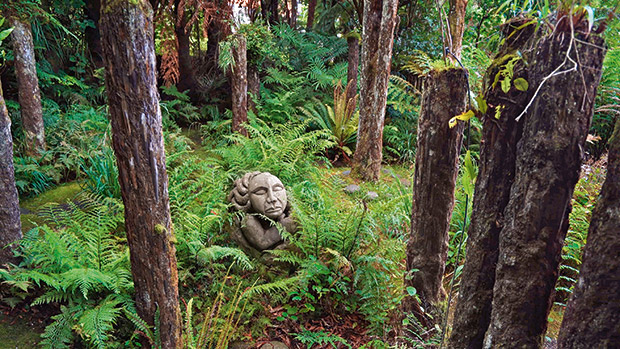 This small but perfectly formed reflection of a natural New Zealand environment is skillfully developed in a 2000-square-metre inner-city backyard over four decades. Its creator, a passionate alpine climber and tramper, did not look to the gardens of Europe for inspiration but to the natural landscapes where she has spent so many happy days. She’s incorporated a fern-fringed waterfall and included several pre-colonization features such as a tiny traditional Māori whare and palisade fences of split-tōtara battens. There is a wetland area, as well as an alpine one, and all are created in this coastal environment, with the mind of a storyteller and the flair of an artist. In addition to the microcosm of native bush are food gardens and an orchard. And, in the sum of its parts, it is a haven of great tranquillity that succeeds in its aim of bringing a natural New Zealand landscape to town. 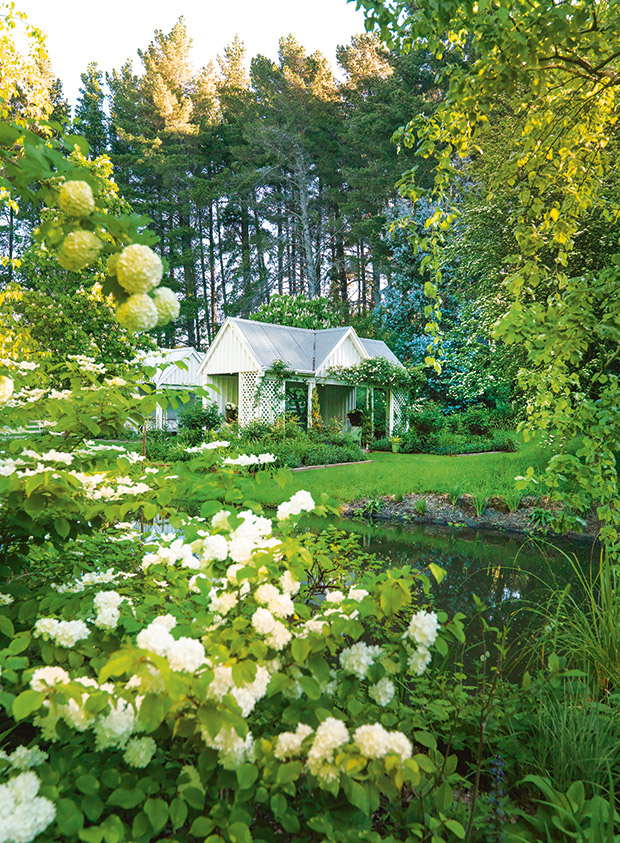 The excitement of the journey continues even after travelers leave the rolling roads of inland Marlborough to wander the grounds of the misleadingly named Barewood Garden. In truth, it is a garden of earthly temptations beckoning visitors to wander in exultation at the beauty of nature; beneath a walkway of sweet-smelling hawthorn to a summer house beside a placid pond, down an allee of columnar crab apples with branches touching high overhead like the ribs of an ancient cathedral.

Listen to the tūīs being bossy and ruling the roost, watch them dive in daredevil manoeuvres between the trees. Behind a row of pleached hornbeams is a fecund potager where the restrained painter’s palette of Barewood is thrown aside for bee-friendly plants, calling with their dramatically bright flower heads in cerise, blue, purple, orange and yellow. 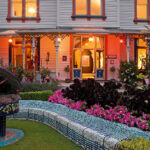 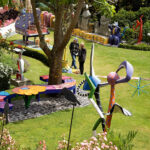 Ragtime tinkles forth from a sculpted mosaic piano in a beautifully maintained flower border in this garden on a hill in the small French-flavoured town of Akaroa. You can bet your sweet patootie this isn’t the only surprise awaiting in this garden of art. A pair of orange and red sculpted legs of giant proportions poke up from flower beds alongside purple mosaiced steps. The feet, meeting two metres above the path, support a massive blue… is it a bird? Well maybe.

Not everything is quite anatomically accurate in this joyous place where the plants are healthy and the mosaic sculptures colourful. Try not to smile at the sculptured acrobats doing their ball exercises along a wall with bright stalks of swiss chard fringing their feet. And give thanks to an artist for seeing the world in this “why not?” way.

8. A stony creek in the middle of nowhere at Clachanburn Country Garden 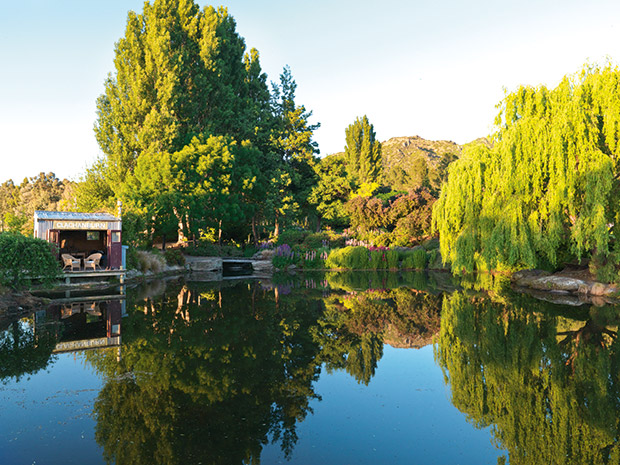 Should one of New Zealand’s famously fast native raptors (the kārearea) pause for thought while flying above the barren foothills of Rough Ridge in the vast Maniototo Plains, it might wonder “What the heck?” as it circles over a surprising splash of lush beauty that is Clachanburn. This is tough country; snow-covered in winter, wind-blown in spring, sunbaked in summer and mostly clay soil between the rocks.

Yet here are magnificent trees, a pair of peaceful ponds, a burbling, stony creek, an orchard, a prolific stand of hazels and russian olives, roses blooming in a profusion of colours, bulbs bursting and tranquil walks in every direction. And then there’s autumn when a fireworks-quality display of colour sets the sky aglow with flaming golden lombardy poplars and yellow willows. One indomitable woman has hewn all this out of rocky hills and cattle paddocks. She’s well worth meeting, and she makes a fine Devonshire tea.

316 Puketoi Runs Road, Patearoa, Ranfurly. (03) 444 7501, clachanburn.co.nz. Open by appointment September to April; Clachanburn is one and three-quarters hours’ drive from Dunedin or a two-hour drive from Queenstown. 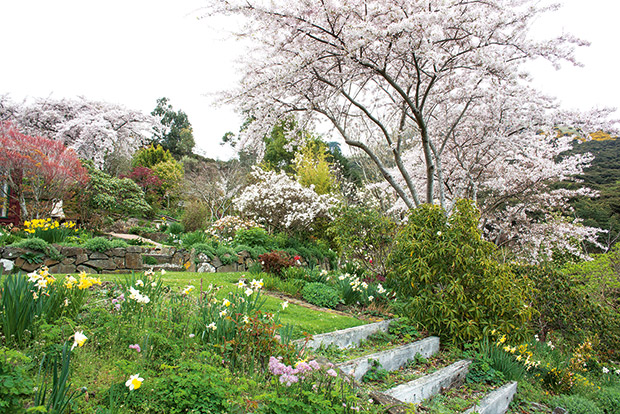 Whatever you make of its human inhabitants, it’s a fact that the flora and fauna of New Zealand are weird. Until approximately 80 million years ago, New Zealand was part of Gondwana, the supercontinent of Africa, South America, Australia and Antarctica. Since it drifted away to develop in splendid isolation, its inhabitants took on some very strange habits. Its birds do not fly — case rested.

Peter and Anna Cooke, whose super-productive “Good Life” garden is a triumph of labour over the odds, have also created a Gondwana-themed dell. Looking down into it from an upper ridge is a breathtaking experience due to the forest’s dense, silent and primaeval feeling. Enormous tree ferns stand like umbrellas over cold hardy palms, cabbage trees and kauri monkey puzzles. It’s a taste of early Gondwana, and all that is missing is the cacophony of a mighty bird population. Ah, if only they’d learned to fly.

10 Hoopers Inlet Road, Otago Peninsula. (03) 478 0880, hereweka.co.nz. Open by appointment; the Otago Peninsula is home to Hereweka and some of Otago’s most interesting wildlife. It is 20 minutes’ drive from Dunedin City.

10. Maple Glen Gardens: A garden for all seasons 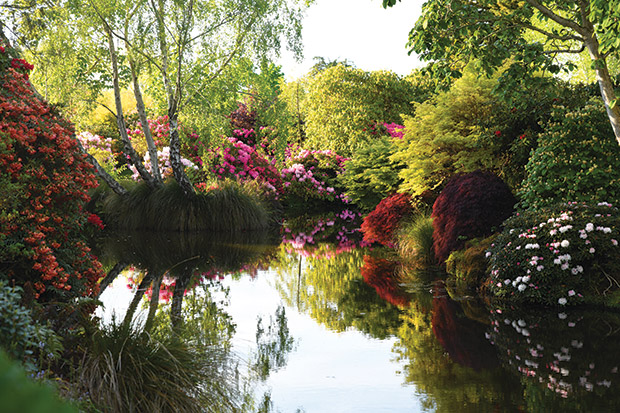 Southland’s consistent rainfall, fine soil, and the passionate energy of two generations of the Davison family to create beauty on their 30-hectare canvas mean this is a stop-worthy destination every season. A visit in the depths of winter, with snow thickly carpeting the grounds, would be a sensational experience. At any other time, it is just beautiful in every direction and for as far as the eye can see with massed plantings of every lovely plant, shrub and majestic tree that flourishes in this temperate climate.

It includes a productive nursery, an aviary, woodlands and wetlands and three days’ worth of drive-on-mown lawns to marvel over. Allow plenty of time to dawdle and appreciate the five decades of dedication since Muriel Davison, newly married to Irishman Bob Davison, imported a handful of bulbs from England and set out to beat back the wind and beautify the land around her. And on it goes, as the remaining part of the Davison farm is known as the “garden-to-be”.

1221 Wyndham-Letterbox Road, Wyndham. (03) 206 4983, mapleglen.co.nz. Generally open Saturday and Sunday, 9am to 5pm; check the website for seasonal or weather-caused closures. The gardens are about 20 minutes’ drive from Gore.