Poultry and their eggs make a perfect dinner for New Zealand’s deadliest pest predators. Here’s how to start fighting back.

The first time a lot of block owners discover they have a pest problem is when they lose a chicken – or worse, chickens – in the middle of the night. When you can’t see your enemy, it’s hard to know how to fight it, or the best way to do it.

Here are strategies from pest control experts so you can fight and win. 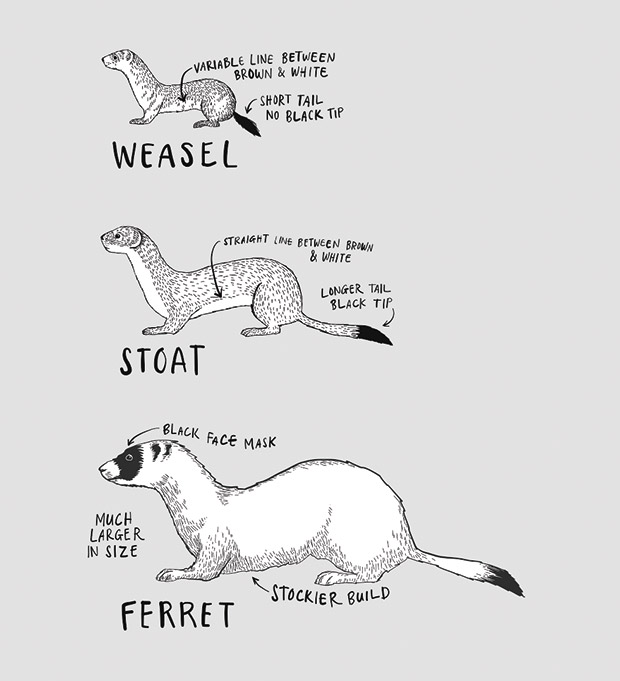 The mustelid family – stoats, ferrets, weasels – are the most deadly and difficult-to-catch predators. The most common is the stoat; the rarest is the much smaller weasel.

Stoats
Weight: 200-325g
Length: 25-40cm (adult, nose to tip of tail)
Main features: brown fur with a white chin and undersides. Long tail with a black, bushy end. Hunts day and night, good swimmer.
Droppings: 4-8cm long, black, thin, hard, with a twist at each end. Droppings remain separate even if they overlap. Often left in prominent positions to mark territory.
Kill signs: bite to the back of the neck, prey usually taken away to a hiding spot.

Ferrets
Weight: 500-1300g
Length: 50-60cm (adult, nose to tip of tail)
Main features: larger and stockier than stoats and weasels (about the size of a small cat). Have a ‘mask’ around the eyes and across the nose. Legs and tail are darker than the rest of the body. Strong green ‘eye shine’ at night.
Droppings: 7cm long, 1cm wide, black with twisted tapering ends, usually full of fur, feathers, and bone fragments. Often left in prominent positions to mark territory.
Kill signs: bite to the back of the neck, puncture holes from canine teeth in prey. 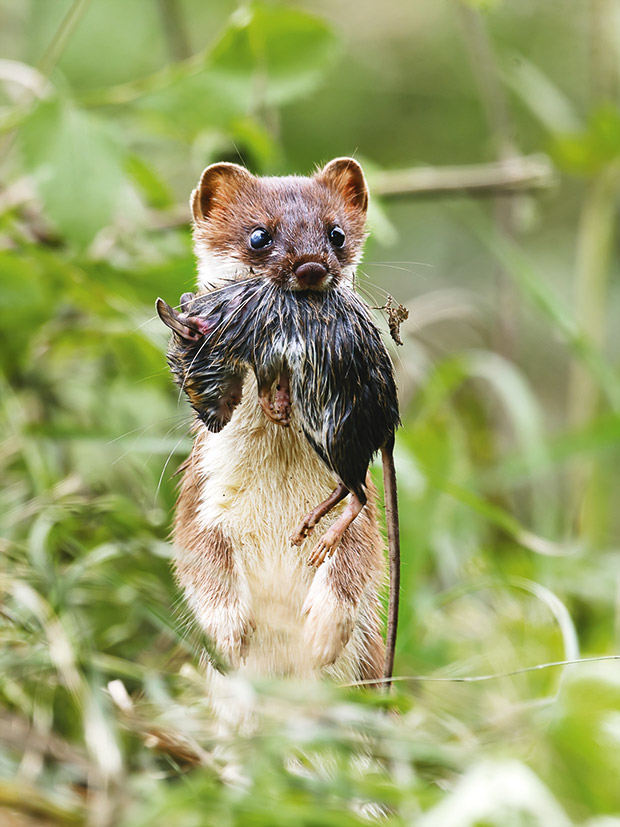 Weasels
Weight: 60-130g
Length: 20-25cm (adult, nose to tip of tail)
Main features: much rarer than ferrets and stoats. Roughly half the size of a stoat, short brown, tapering tail (about half the length of a stoat’s), no black or bushy tip.
Droppings: small (5mm), black, thin, twisted at the end.
Kill signs: bite to the back of the head or neck. 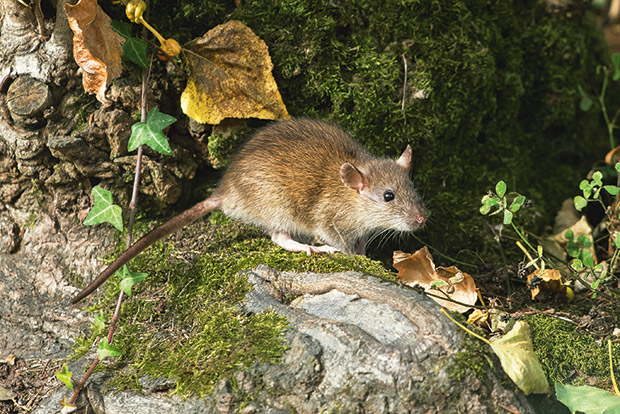 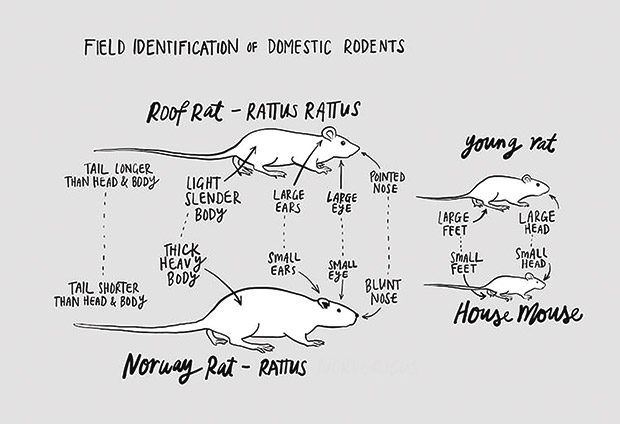 What rat do you have? One clue is in the tail length compared to the head and body.

The kill traps recommended by DoC and other pest groups are tested on their welfare performance. It requires 10/10 test animals to be rendered irreversibly unconscious within 3 minutes. All the ones recommended in DoC’s trapping guide (below) kill the animal instantly. 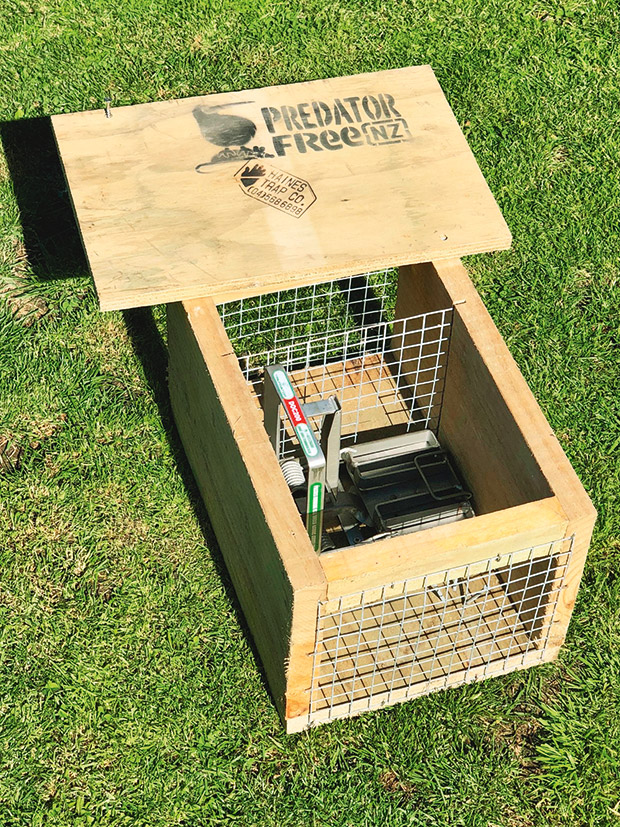 Tip: It’s important to identify what pest you’re dealing with before you buy a trap, to ensure you get the right one. Most people will be dealing most with rats and stoats, as ferrets and weasels are rarer. 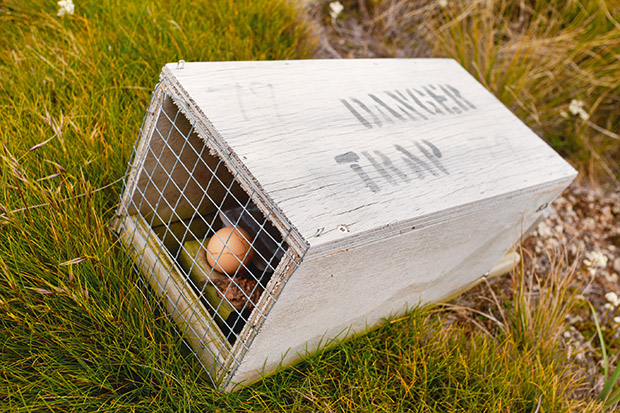 1. If you live in an area where there are a lot of non-target species, it may be better to use live capture traps, so you don’t accidentally kill pets or birds. Always set traps according to the manufacturer’s instructions.

2. Make sure there’s no other food available, such as open troughs of feed that rats can easily access.

More stories you might like:
How this Whenuapai firm is using dung beetles to improve soil quality on New Zealand farms

3. The smaller your site, the higher the reinvasion rate of a pest. You’ll need to be more intensive in your trapping methods than professional trappers working in the bush. If you have money to buy lots of traps and time to clear them, you can place them as close as 10m apart on boundaries.

4. Ideally, have traps in place permanently and check them regularly. Don’t be disappointed if your kill rates vary. You may catch more in certain months (eg, when food is scarce) and not others (eg, when natural food sources such as eggs, baby birds and fruit/nuts etc are prevalent).

5. If you have high numbers of rats, self-setting traps or bait stations can be more successful and less work than one-off kill traps. However, use bait cautiously if you have pets as they may scavenge carcasses.

6. Stoats (and other mustelids) commonly use ridges, the sides of waterways, tracks, and road edges, so these are the best spots for traps. The best bait is fresh or salted rabbit meat, eggs, and specialist stoat lures. Mustelids are also attracted by the odour of another mustelid. Some trappers drag the scent glands (around the base of the tail/genital region) along the ground and around a trap to entice others to investigate it.

7. It’s best to place tunnels (with traps inside) along a natural walkway. These are usually found along fence lines, stream banks, beside or through hedges, in the bush among tree roots, beside fallen logs, and in dry culverts. The area leading up to the trap should be clear of leaves and weeds.

8. Compost is an easy source of food for rodents, so use a rodent-proof bin to cut off this food supply.

9. Every trap counts. If you can encourage your neighbours to trap (and perhaps share the cost of traps, bait stations, bait etc), you can make an enormous difference to your region’s domestic and wild birdlife, native bush, and food production trees.

10. For rats, the best trap spacing is 25m apart in a grid pattern, with a good quality bait that is regularly refreshed, eg peanut butter, chocolate, specialist rat lure.

11. If you’re targeting stoats, using two DoC traps in a tunnel has been shown to have considerably higher catch rates than a single trap.

WHAT YOU CAN LEARN FROM A PEST-KILLING EXPERT Goodnature’s Robbie van Dam has learnt a lot about killing predators since helping to create the company’s self re-setting traps back in 2005. These are his tips:

1. Put your traps as far away from your coop as possible

It sounds counterintuitive, but the best strategy for controlling predators like rats and stoats is to trap or kill them before they get anywhere near your flock.

“Once (a pest) gets there, it’s really difficult to control it (as there’s always a food source). It’s best to control them as far from the coop as you possibly can.”

2. The best place is around your boundary.

“A network running around your boundary fence is great: it’s normally quite easy to access, and people tend to wander around boundaries relatively regularly.”

Robbie says he’s found a lot of landowners think once they have traps – of any kind – they’ll quickly catch pest animals.

“There’s absolutely no immediate and fail-safe way. Sometimes you might get a few animals straight away, sometimes it takes a bit longer. It’s a game of patience. Dead rats piled up under a Goodnature A24 trap. Research shows the lure’s scent on a dead animal’s breath encourages other rats to try it.

“You can have traps at 50m intervals and have one that catches six animals and one that’s caught nothing. Why on earth do they all end up (at that one spot)? There’s scientific evidence that once you’ve caught one (in a particular trap), you’re significantly more likely to catch a second and a third.”

4. The best lure you can use

Any attractive lure, such as peanut butter or chocolate for rats, or animal protein for stoats, will do the trick, but the key is it
must be fresh. Goodnature’s A24 trap can be set with either a rat or stoat lure and an automatic pump keeps it fresh, hands free, for months.

“Fresh peanut butter on a trap is really good for the first couple of days, but it declines very quickly. We know nobody has time to be constantly checking baits and traps.”

It’s also important to pre-feed your chosen lure to pest animals, so they get used to eating it and seek it out.