Amy Sammons and Kelly Austin spend most of their time crafting platters that look like works of art. They share their tips to creating the perfect party platter.

Imagine a platter 5m long that needs to feed up to 600 people. That’s the kind of challenge caterers Amy Sammons and Kelly Austin thrive on. The two friends run Picnic & Platter, based in Whitianga, creating everything from picnic platters for two people to enormous ‘grazing tables’ for parties and weddings around NZ.

The self-taught pair admit there’s an art to what they do, but there are basics anyone can use to create a pretty platter. 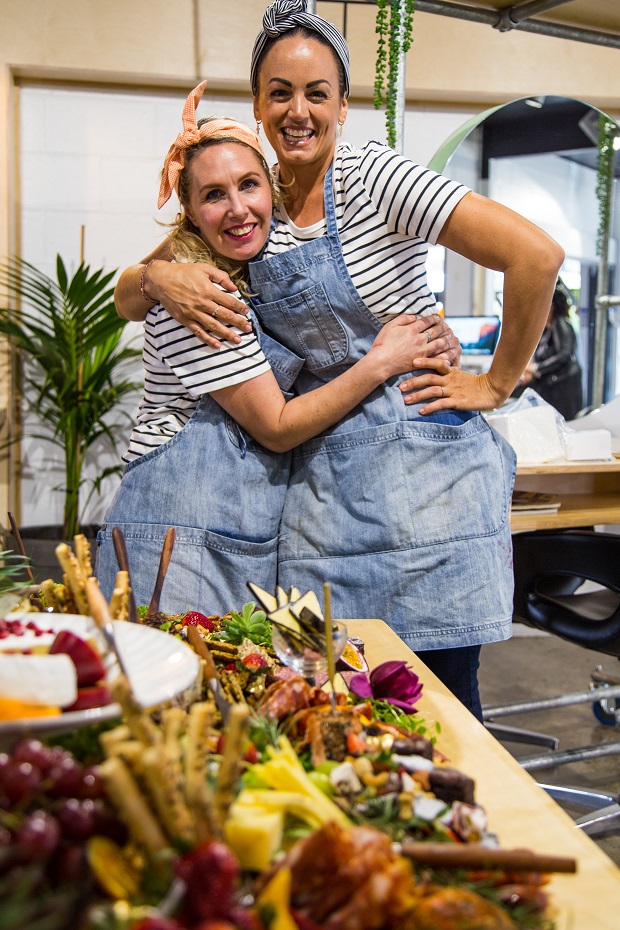 Amy Sammons (left) and Kelly Austin of Picnic and Platter.

1. CELEBRATE THE STAR OF THE SHOW
There’s no hesitation when you ask the Picnic & Platter team where they start.

The cheese is always ‘dressed’ for the occasion.

“I think it’s the number one thing you can do,” says Kelly. “If you’re making a platter for your friends and you want to make it a bit ‘spesh’, you need to dress the cheese.”

Their favourite ideas include:
• place a hunk of honeycomb on top of a blue
• scatter raspberries on top of a brie
• style with roses or use herb sprigs like rosemary or thyme

FAVOURITE CHEESE: KAPITI KIKORANGI BLUE
“It’s an awesome cheese, I think it’s the gateway blue,” says Amy. “It’s a really delicious blue cheese, it looks beautiful too, the stunning black on the outside, but it’s mild and creamy enough that people who don’t like blue cheese try it and go ‘oh my god, that’s really nice’.

AMY & KELLY’S TIPS
• You can often find 800g-1kg round ‘wheels’ of brie in the specialist cheese section of supermarkets or you can buy them online. Smother with runny honey, and sprinkle blueberries and slithered almonds over the top. 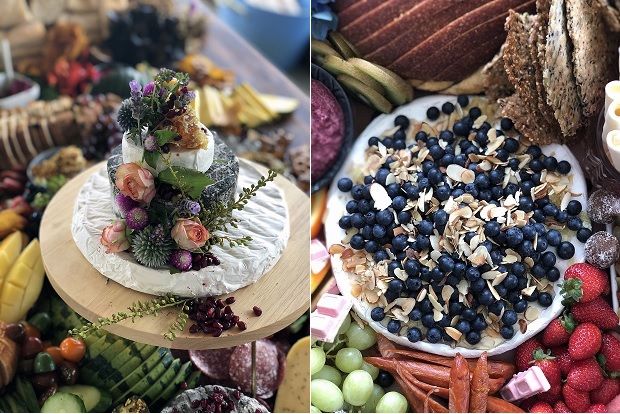 • Make a cheesecake, says Amy.
“For a wedding we did, we had a large wheel of brie, then a whole Kikorangi, then a small 125g brie, with honeycomb on the top, pomegranate seeds, and then flowers, lavender, roses, and clover.”

• If berries aren’t in season, dried fruits and nuts make great accompaniments.
“You can make towers of brie, like an 800g, then stack normal-sized (125g) brie on it, then little baby brie on top,” says Kelly. “Then have the dried fruits and nuts cascading off it, it adds that ‘I’m a special cheese’ feeling to it.”

• If a cheese is covered in wax, remove the wax before you place it on the platter.

2. 50 IS THE PERFECT NUMBER
If the platter is a before-dinner treat, Amy and Kelly have found 50g of cheese and 50g of sliced meat like salami or ham per person is about right. However, if the platter is the meal, be more generous.

“It would be our nightmare, to under-cater,” says Amy. “Never under-cater! It’s better to over-cater.”

Weight is a better estimate than slices, says Kelly.

3. BREAD & DIPS
Eight people will eat one loaf of bread and a sheet of home-made lavosh (also known as lavash), a Middle Eastern flatbread. Kelly says they include two dips and a chutney per loaf.

“I don’t think you can ever over-bread or over-cracker because even if you run out of cheese, there’s always going to be dips.”

“If you’ve not given them enough bread and crackers, but they’ve still got dips, it’s basically wasted. You can eat crackers or bread by itself, but it’s hard to eat dip by itself.”

AMY & KELLY’S TIPS
• The three base dips Amy and Kelly use are hummus, pesto, and chutney.
“It’s nice to get a chutney that’s complementary to your cheeses,” says Amy. “We often use an onion jam because it’s just so nice with a blue.”

• Don’t put dips or crackers on the platter in their original container. It looks messy, plus you can use bowls to add colour and character to the platter (see tip 6).

4. MAKE ALL THE FOODS EASY TO EAT
Kelly says they love to look at other people’s platters for inspiration, but one of their pet peeves is when someone includes food that guests can’t eat.

“When you look closer, a lot of the stuff goes to waste because you can’t eat it, like big whole fruits that aren’t cut.” 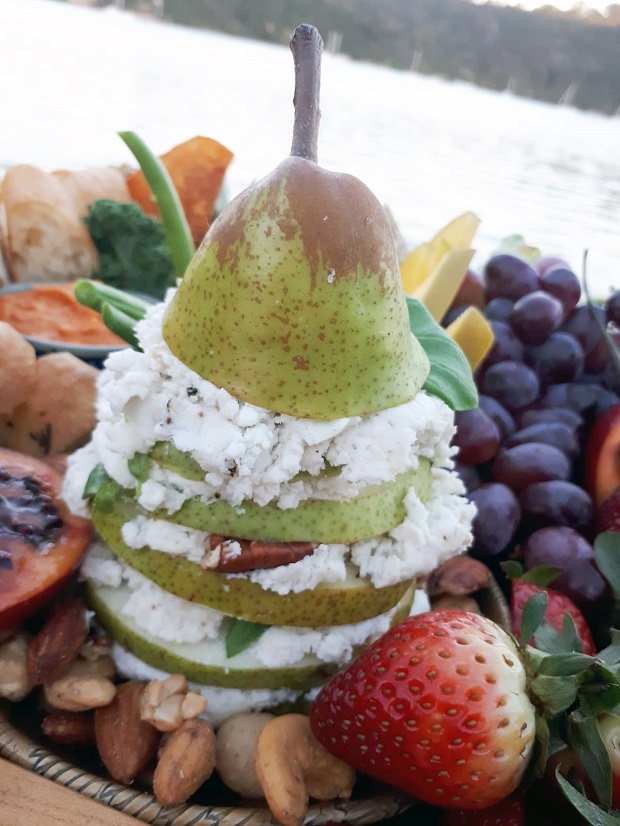 Cut pears into easy-to-eat slices. Each slice of this pear is covered with goat cheese and walnuts, then the pear has been ‘reconstructed’. Photo: Picnic & Platter

AMY & KELLY’S TIPS
• Pears are one food often included whole, but it’s easy to make it something people can easily eat. Cut the pear into thin slices so people can eat it with a slice of blue cheese and some walnuts.

• Cut the pear into slices, then reassemble it. Between each slice, add a soft goats’ cheese, honey, cracked pepper, basil, and walnuts.
“We do it so you can take one layer off at a time and it’s a mouthful, and it looks great,” says Amy. “It’s good for people with dietary requirements: if you’ve got someone gluten-free, they’re not missing out.”

• Make an avocado a user-friendly dish. Cut an avocado in half, drizzle it with olive oil and dukkha, or a little dehydrated sauerkraut, and season it with salt and pepper. Or fill up the hole left by the stone with balsamic vinegar and olive oil or dukkah, season with salt and pepper. Make sure the flesh is covered so it doesn’t turn brown. Serve with a knife so it’s easy for people to cut a sliver or pre-cut it so they can easily scrap out a serving with a cracker. 5. ADD FOODS THAT PLAY TO THE CROWD
When Amy and Kelly catered to an afternoon celebration of life, they were asked to create a grazing table for up to 600 people. The standard mix of cheese, meat, bread, crackers, and dips also included chocolate biscuits for people who weren’t that hungry but wanted something to have with a cup of tea. There were also slices of watermelon, strawberries, and lines of Whitaker’s pink-coloured chocolate as they knew children would be attending.

The same table included special requests from the family. There were purple serviettes, purple chips, purple dips and blueberries to honour the person’s favourite colour.

6. GET CREATIVE WITH CONTAINERS
If there’s one thing Amy and Kelly try to avoid, it’s white ramekins.

“If you want to do something special, go down to your local op shop,” says Amy. “Buy some really different old glass wear or some beautiful pottery.”

One of Amy’s favourite pieces for displaying cheese is not for cheese, and she uses it upside-down. “It’s actually a copper wire basket that I bought from the Warehouse. But when it goes up the other way (the base) is the perfect size for a wheel of brie, so we’ve been using it up the wrong way! One time we stuffed it with hydrangeas, another time we put fairy lights through it.”

Containers also give you another way to make your platter special.

“Make some levels in your platter,” says Amy. “Have a nice tall glass that has the olives in it, that way they’re up there and ready to eat, as opposed to having everything spread out flat.”

HOW TO ‘BUILD’ A PLATTER
Construction starts with the star: the cheese or cheeses.

“Some days we listen to the cheese… and it just tells us where to go,” laughs Amy. “I don’t think there is a formula, it’s always different. Sometimes we group them together on a wooden block, sometimes we spread them out down a platter.”

The grapes are usually second because they’re big and take up a lot of space. Next, are the dips. Pieces of bread and crackers often fill up gaps along the side of a platter or consider putting them in a basket beside the platter.

“It’s really easy to get stuck in the brown colours: you’ve got the bread, you’ve got the meat, and then if you’ve got red grapes, it can make it look quite dull. We try to add in colours. If we know we’ve got a lot of bread, we’ll buy green grapes to break it up a little bit.”

Amy thinks in terms of contrast. When fresh raspberries aren’t available, she uses freeze-dried ones and sprinkles them over a cheese for a splash of red on white. Activated charcoal wafer crackers are also a dramatic contrast with brie or camembert.

“We forage from gardens too, olive, thyme, rosemary, eucalyptus. Sometimes at a wedding, we talk to the florist and if they have leftover bits and pieces, we might use some of those.”

Another thing that makes their platters pretty is their abundance.

OTHER TIPS
• DON’T GO TOO SPICY
“You don’t want to give people a fright,” says Kelly. “And you don’t want them to spit anything out.”

• WORK WITH THE SEASONS
“You can work to the seasonal specials and it will still look good,” says Kelly. “You don’t have to buy a punnet of raspberries if they’re $10. Do something else: pick a flower and put it on top… dress your cheese with nuts if there are no fresh berries.”

• IMPROVISE
Kelly says one client wanted a platter where guests could make their own sandwiches. Rather than buying sliced ham, they bought a whole leg and turned it into the centrepiece.

Tini’s wedding graze for 100. Our graze was the only food so we incorporated a whole leg of ham and added some flowers to it to make it a bit extra 💐 #bedazzledham

The ham – which they ‘dressed’ with a bouquet of flowers sticking out the end – sat on a stand, with bread piled underneath so it didn’t take up room on the platter.

The concern was the lettuce would start to wilt during the party. “We wanted to make sure everything stayed fresh, so we put the lettuce in jars with water at the bottom.”