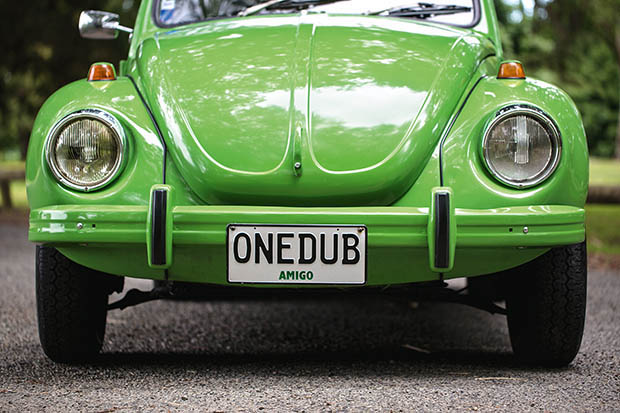 A not-so-common species of beetle has been adored, stored and restored.

Throughout the adventures and decades there has been a constant delight in her life – her 1972 1302 S Volkswagen Super Beetle, painted green to match the VW taxis that tickled Jo’s fancy in Mexico City, has been on the scene for 25 years and the two are tight.
As a teenager Jo longed to drive. She learned in a paddock at 14, attained her driver licence at 15 and had the keys to her first vehicle – a Fiat Bambina, paid for with hard-earned after-school employment – before she was 16. When Jo purchased her German-made “dub” in 1992 it was no casual acquisition of convenient wheels. “I’ve always appreciated a nice car with good handling that’s a little throaty.”
The Volkswagen – born out of Adolf Hitler’s desire for low-cost motoring for the masses and masterminded by Czech-born engineering genius Ferdinand Porsche – matched Jo’s needs. “Volkswagens symbolize good times, good fun and freedom. A girlfriend and I were flatting together when I first owned the Beetle. It elevated our status to the cool chicks in town.”

When first spied, Jo’s Super Beetle was sitting on the lot at a local Whanganui car yard. “I was excited, wanted it and decided instantly it was the car for me.”

But love at first sight looked shaky after a test drive. “A family friend and VW fanatic checked it over for me and his perfectly tuned ears detected a cracked head. I went back to the car salesman and said, ‘I want this car and if my friend can do the work on it I’ll buy it.’” 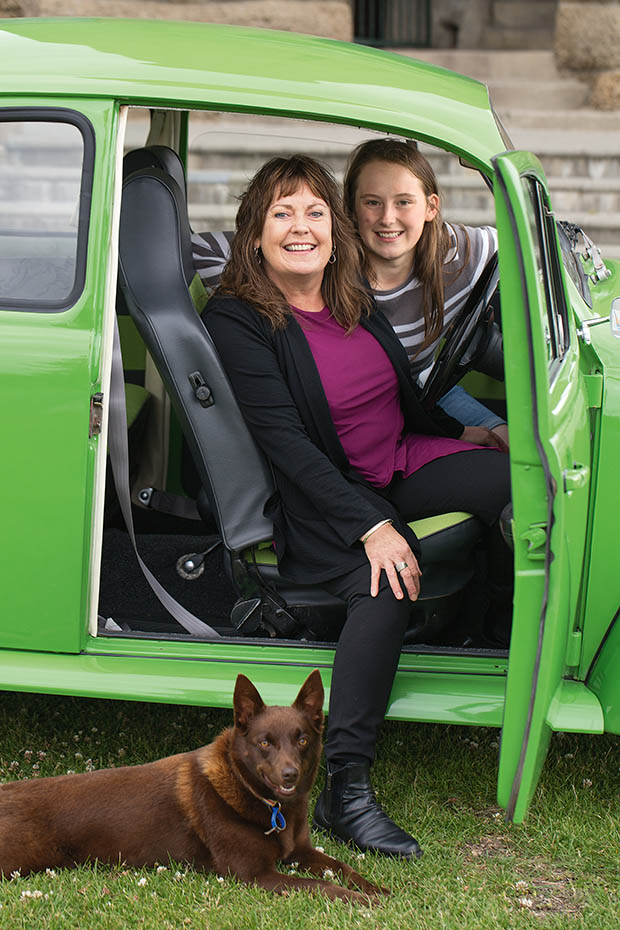 Jo Taylor and daughter Taylor Chadfield with their kelpie Roo.

Discussions ensued, repairs were made and $5000 bought Jo the car of her life. Manufactured during a short-lived production run (1972 to 1975) the Super Beetle was Volkswagen’s bid to freshen up its flagging 40-year-old brand.
Heavier and larger than a standard VW bug, it’s powered by a peppy 1600cc twin-port engine with extra room under the front bonnet (a spare tyre has been repositioned) and inside the cockpit. 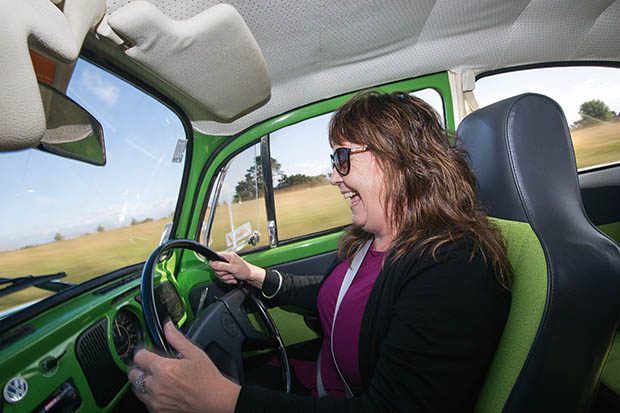 “It gets along the road really well. It’s been described as the most exciting, most powerful, most comfortable Beetle,” says Jo heading out the back of Whanganui’s Durie Hill and down into the picturesque Okoia Valley.
“I like the fact that it’s a tiny bit sporty and glamorous. It’s reasonably complex to drive. Being low ratio you have to work the clutch to keep the revs up. It sits nicely at 50 kilometres around town. It’s good on the hills and very happy at 100 on the open road. I’ve put big speakers in the back. Driving with a blast of the Black Seeds or Katchafire is so much fun.”
When Jo headed overseas in 1994 she couldn’t bear to part with her bug, so stored the car in Auckland at her sister’s garage for two years.

“When I got back we had a fiasco. My sister had tried to crash start it and when we tried to tow it, the rope broke and the VW ran over her lawnmower which was wrecked. But the dub didn’t have a scratch and off I drove to Whanganui.”

Two years on when Jo and her partner Dion set off traveling again, she stored the car in a hay shed at Upokongaro. “Until then it had been our car 24/7. We loved driving it to South Beach at the mouth of the Whanganui River or to Raglan with Dion’s surfboard on the top. But it was beginning to show some rust and deterioration. When we put it in the hay barn it went up on blocks and we flooded the engine with oil.” 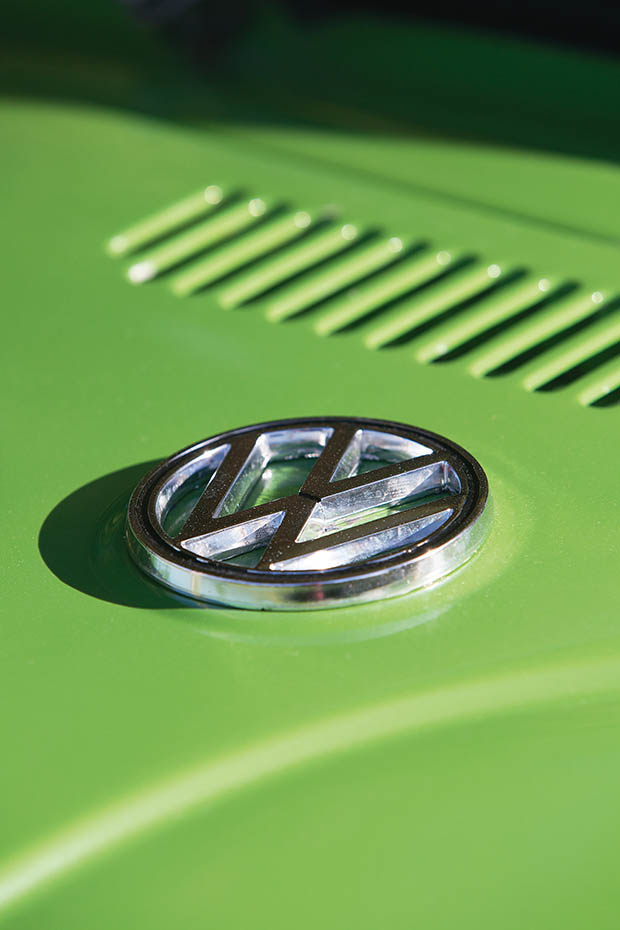 When the couple returned home several years later – with an extra passenger, their baby daughter Taylor, now 16 – they popped in a new battery, pumped up the tyres and Jo hopped in. “I drove it filled with white-tailed spiders, dust and cobwebs but with a grin from ear to ear.”
Once the family was settled, Jo set about reviving the car to its glory. Initially there was an overhaul of body work. A new roof was welded on, rust was taken out and it was painted. “It was a massive job and took a year.” Twelve months later it was the engine’s turn. “We could hear a flat spot when it was running and knew something was wrong.” The resulting invoice appendix was extensive: main bearings, cylinder head repair, crankshaft seal, oil pump, cam bearings, barrel and piston kit, push rod tubs.
The upholstery and interior were also stripped out and revamped. 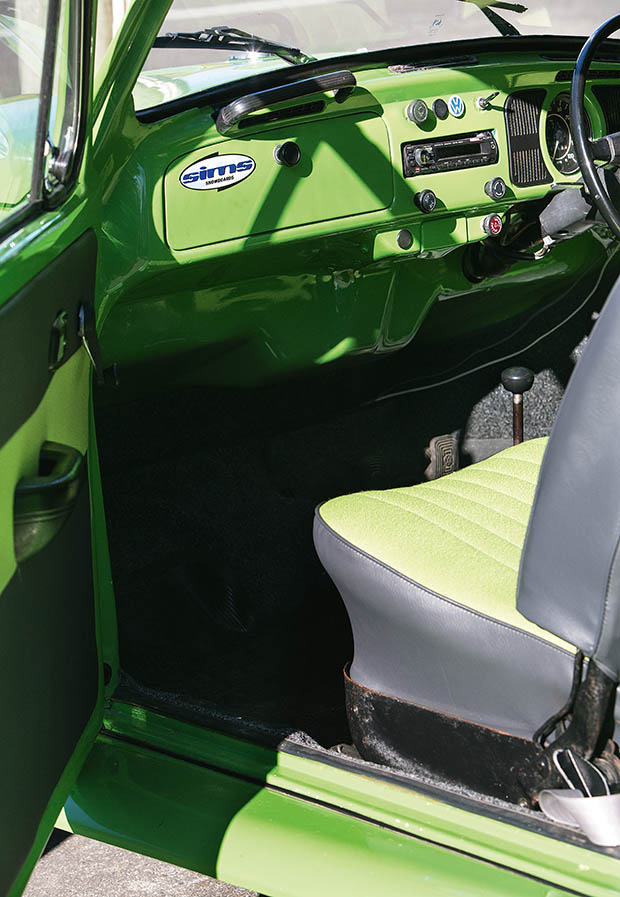 “I’m absolutely rapt with the result even though Dion does refer to it as my million dollar car,” says Jo.
Heading along Ikitara Road the dub’s 45-year-old air-cooled throb has lost none of its charm. “Over the years it’s been on road trips with our girls touch rugby team (The Handbags), had snowboards in it, mountain bikes on the back and surfboards on top. It’s had ribbons tied on its windscreen wipers by a stranger, the thumbs up from a policeman, so many smiles and waves, and it’s been a wedding car.” These days Jo says she watches the weather before choosing between her daily runabout, a modern Subaru or her German gem. “I’ve become a bit fussy.”
Daughter Taylor has recently passed her driver licence and Jo hopes one day to pass on her dub. “It’s pretty cool. It’s part of us as a family.”

When the dub does finally transfer from mother to daughter, Jo hopes Taylor will have as much fun and memorable experiences as she has had. In the meantime she still hugs herself when she recalls the crossroads moment when, with plane tickets in hand, her heart ruled her head and the decision was to rekindle rather than kiss goodbye.

“After the hay shed era it could so easily have been on the scrapheap but it’s risen again.” 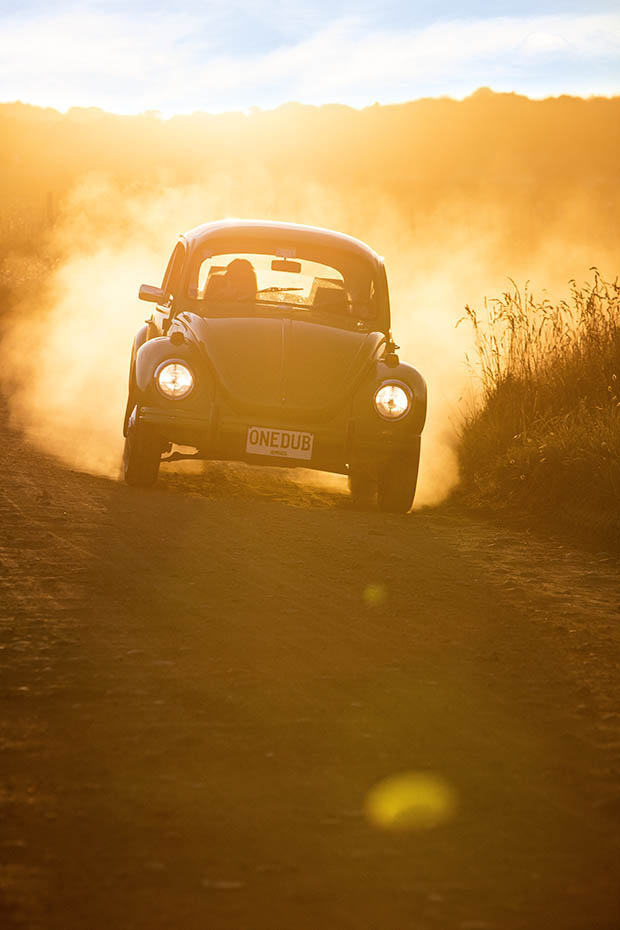