4 reasons to plant buckwheat in your garden 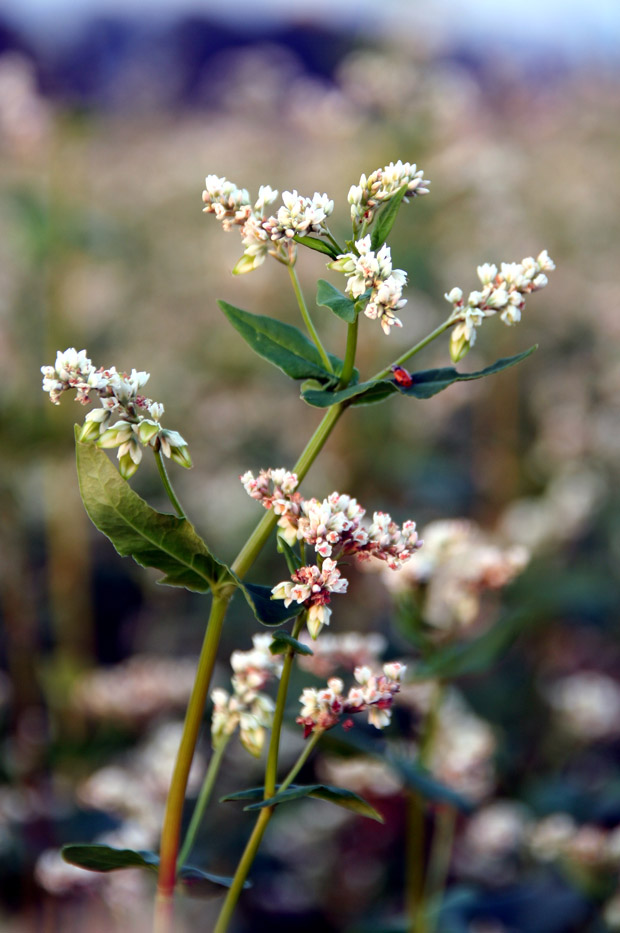 If you’re interested in grain-free eating, buckwheat is a great option – and you can grow it in your own garden.

People tend to think of buckwheat as a grain. It sort of looks like one and it is categorised as one from a culinary perspective.

But buckwheat isn’t a grain, a grass or related to wheat. Its closest relatives are sorrel and rhubarb. It has been cultivated for over 3000 years in mountainous regions like Tibet and northern China where wheat will not grow at high altitudes.

Buckwheat noodles are a major feature of Japanese (soba), Korean, Russian and northern European cultures. The groats (hulled seeds) are commonly made into porridge, eaten raw, or can be sprouted.

The current trend is to ‘activate’ or soak buckwheat before using it. Pancakes made from activated seeds have become my new favourite breakfast for their nutty, earthy taste. Whenever possible, I use organic groats.

Buckwheat pancakes and I go back a long way. I like to think the reason I love buckwheat so much is that I was conceived in Canada, home of buckwheat flapjacks (pancakes). Somehow, a snapshot of a whole stack of flapjacks with a knob of butter between each one, dripping in cascades of maple syrup, is an iconic Canadian image for me. I asked my dad if he remembers eating these when he lived in Canada in the 1960s, working in bush camps as a young man. He remembers lots of flapjacks and that every table had pepper, salt, and a squirt can of maple syrup.

Flapjacks are hefty, thick cakes made with baking powder or soda, creating hundreds of little air holes for the maple syrup to soak into.

However, the French side of Canada must have snuck into my culinary preference genes at a crucial moment because I don’t like thick pancakes. I much prefer crêpes, the thinner the better, with slightly crunchy sides.

That means pancake day at our house is a double pan affair. There’s me pouring in a minimum of batter and quickly tilting the pan to spread out the mix as thinly as possible. My other half Paul is Canadian to the core (by birth), cooking his much thicker, soak-up-the-syrup flapjacks.

I’ve included both recipes. The ‘two-ser’ one is from my Canadian brother-in-law Chris. The activated crêpe version is from my talented circus acrobat friend Damara, who lives at the Riverside Community in Motueka.

Chris’s mix is made from buckwheat flour and is not soaked overnight. Damara’s version is soaked. Soaked buckwheat groats are also known as ‘buckinis’.

4 REASONS TO PLANT BUCKWHEAT IN YOUR GARDEN

1. Buckwheat is a great cover crop. Its speedy germination rate makes it a good choice for smothering weeds or as a mid-season green manure crop.

2. Buckwheat is known as the ‘phosphorus pump’ of the garden because of its ability to absorb phosphorus and return it to the soil in a more useable form. When turned in or composted, it also adds organic matter and valuable soil nutrients.

3. Buckwheat has been trialled in New Zealand for a number of years as a pollen and nectar source to increase natural predator numbers to control crop pests. It has been planted between rows of grapes in vineyards to attract small native wasps (Dolichogenidea tasmanica) which predate the leaf roller caterpillar.

4. Buckwheat flowers also attract a number of other beneficial species including hoverflies, lacewings, and ladybirds. Pollinators are attracted to buckwheat, and bees create a strongly-flavoured, dark honey from it.

THE BENEFITS OF ACTIVATING BUCKWHEAT

The reason for soaking, or activating, the buckwheat, is to help break down the phytic acid that is present in all seeds, grains, nuts, and legumes. Phytic acid binds to the nutrients in these foods, making them less available to our digestive tract.

The content of phytic acid varies enormously between plants due to environmental factors and the type of seed, grain or nut. It performs an essential role in seed germination. When seed sprouts, phytase enzymes break down phytates, allowing the nutrients contained in the seed to become more available.

Soaking, sprouting, malting and fermenting seeds, grains, nuts and legumes increases this activity. It also decreases the amount of phytic acid, making it easier for our digestive system to access and digest nutrients.

1. Buckwheat provides a rich supply of flavonoids, particularly rutin, quercetin, lutein, and zeaxanthin (flavonoids are phytonutrients that protect against disease).

2. It is a good source of potassium, magnesium, and manganese.

3. It is also a great source of fibre and protein and contains all essential amino acids, including lysine which is good for people who suffer from cold sores.

4. Buckwheat is very filling and great for satisfying hunger because it is a carbohydrate that doesn’t produce the same insulin impact as grains.

5. Buckwheat is gluten-free and highly digestible and can be safely eaten by people who have coeliac disease or digestive disorders

More stories you might like:
How a cheap bundle of houseplants grew into an unfurling indoor plant obsession