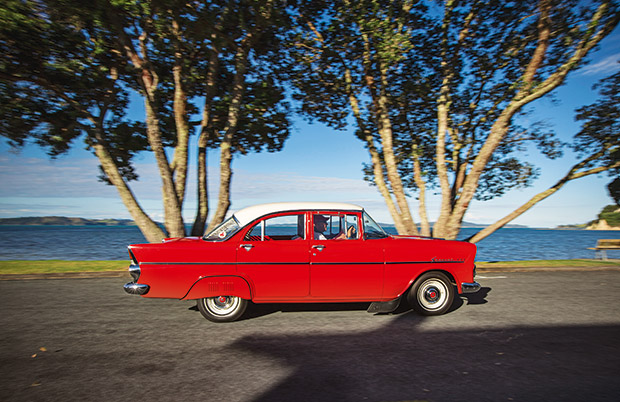 After six decades of service, this beloved survivor is hopefully spending the winter tucked up in a blanket in Central Otago.

Merv and Vicki File are almost getting used to having neighbours. In 2018, they moved to Snells Beach, northeast of Auckland, after 43 years of developing and enjoying a Kumeu lifestyle block, where neighbours were far and few between.

The large Kumeu property was bought as barren land with Merv’s brother and, for several decades, they were heavily involved with horses, from stabling to training and later breeding them. When Merv and Vicki’s elder son Troy was 18, Merv picked up a neighbour’s disused HD Holden for $200 as a project, not knowing where it would lead. 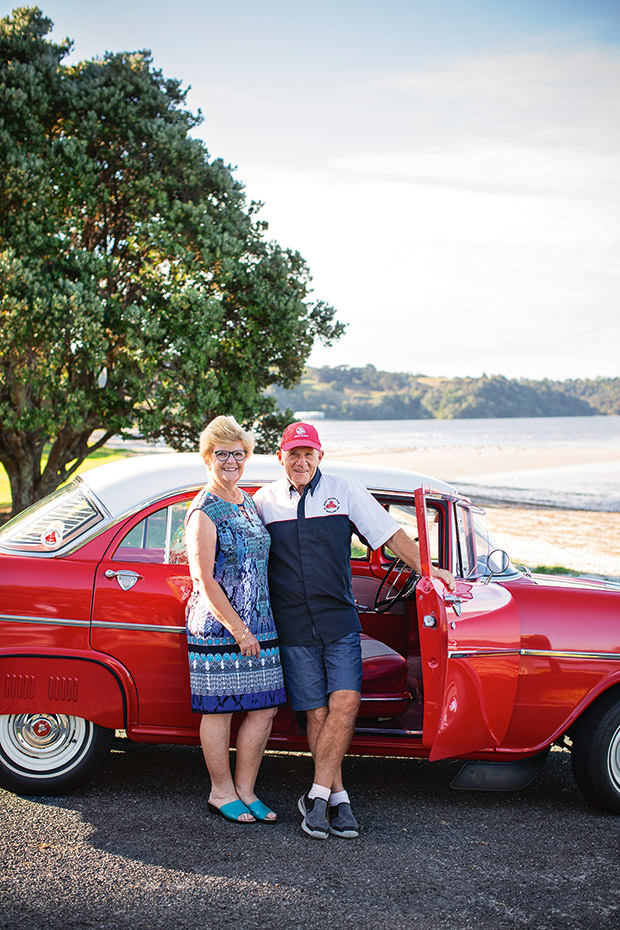 “Troy promptly set about restoring it,” Merv recalls, “and did a great job. He joined the Early Holden Car Club, and this became a joint interest, prompting Vicki and me to start attending club events.”

The stable complex the Files built later became a car storage facility, housing 19 early Holdens, including an EK Special, a clear favourite that Merv and Vicki felt privileged to purchase in 2005 when the opportunity arose.

Sixteen years later, the EK remains an unrestored survivor, one that certainly lives up to its “Special” nameplate, remarkable for its condition, originality, and provenance. “It’s a pampered car that has stood the test of time with careful, infrequent use,” explains Merv. “Remarkably, it’s traveled just over 51,000 miles. It’s always been garaged, and we’ve been very selective about where it goes and when it goes.”

So the decision to drive it 1600 kilometres to Tīmaru, for the Holden Nationals (a biannual event that attracted 140 display cars), was not taken lightly — nor was the decision to part with the vehicle after the March event. 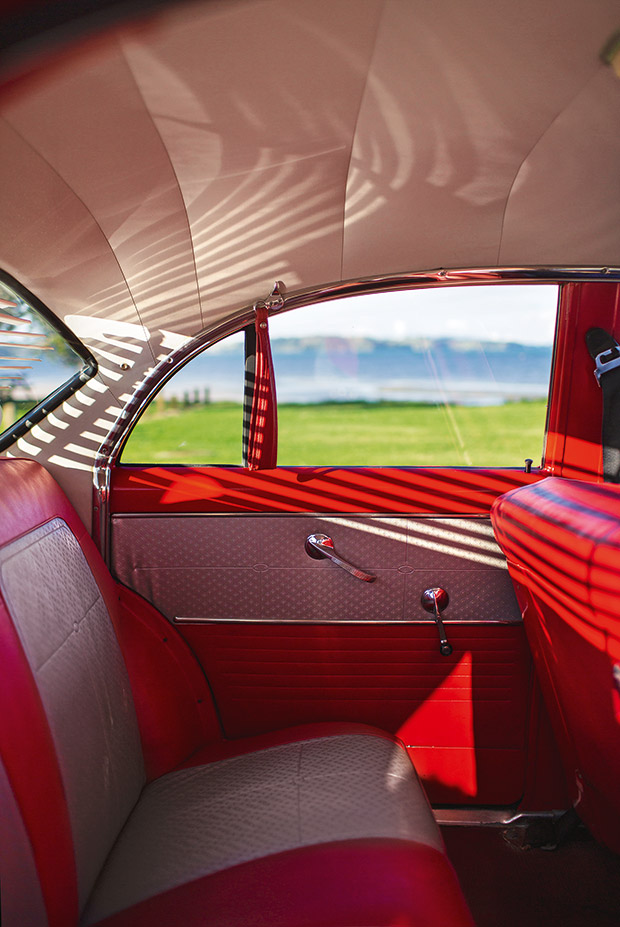 “It’s a bit premature,” Merv says, “but we chose to pass it on to the next generation while we were down south.  Troy works for a plumbing company in Queenstown, and his Irish wife Sarah teaches at Shotover Primary School, which our granddaughter Ciara (11) and grandson Ronan (8) attend.”

The Special would join a pair of HD Holden Premiers in their Shotover garage, including a station wagon Troy restored during a pandemic-disrupted 2020. Troy’s brother Lyndon and his wife Lauren live in Canada with their twins Hayden and Kaitlyn.

“If they were here,” Vicki concedes, “it would have been much more difficult deciding who to give the car to.”

The EK Holdens might be functional, Aussie-built workhorses at heart, but there’s an Americana influence in the Special that is celebrated. Lashings of chrome and ornate trim reflect the confidence of the 1950s. Merv refers to it as a “baby Chev” as it’s modeled on a 1956 Chevy.

It’s a practical classic, too, and as Merv points out, the EK Standard was a popular taxi back in the day, seating six at a pinch and blending in with the nation’s fleet of Hillmans, Vauxhalls, Humbers, Fords and Morrises.

But in its heyday, Merv admits, the car he now covets didn’t register with him. It was ordered new by Mrs Rose Heaton of St Heliers Bay, Auckland, who took delivery on 4 September 1961. Her colour choice of Grenadier Red topped with a Snowcrest White roof has always been a popular combination with the car’s many admirers. Upholstery for the front and rear bench seats is General Motors’ red-over-silver Elascofab.

At the time, the purchase price was 1266 pounds, with a minimum 449-pound deposit required in overseas funds. The car control ledger shows it arrived from Melbourne aboard the Wanganella and was the odd one out in a batch of similar Holdens. Most of them were entirely Snowcrest White. 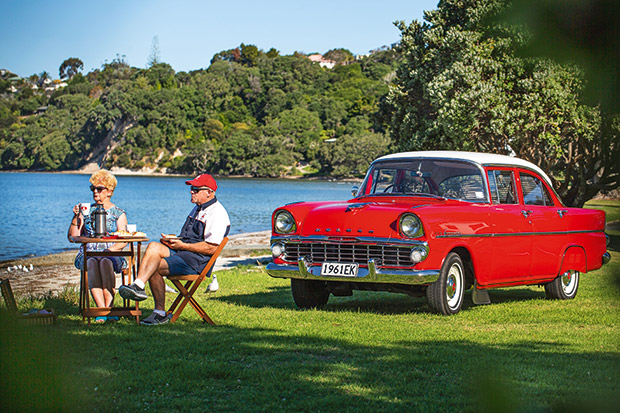 Custom-built for its first owner, the Holden saloon in Grenadier Red was the odd one out on a ship that sailed here from Melbourne in 1961 — most were pure white.

It’s unlikely the car had previously crossed Cook Strait until Merv and Vicki decided to get adventurous. They had it carefully inspected and fully serviced in Warkworth, a new warrant of fitness was issued, and the radial tyres — a concession to modern motoring — were inflated to 28psi. Merv and Vicki were slightly apprehensive about the length of the journey ahead but drove the entire route in convoy with another classic Holden or two.

“It was a fabulous experience,” Merv reports, “a very comfortable cruise that went without a hitch.” By maintaining a sensible pace, he found the car “got better and better as the miles rolled by”, attracting appreciative waves and toots on every leg.

“It just reveled in its work and proved a terrific tourer. The EK demands your full attention when driving, especially on the open road. You must concentrate 100 per cent. And while there’s no power steering, this model was the first Holden with the Hydra-Matic transmission, so it’s very smooth. You need a little bit of choke on start-up for the torquey [better driveability] motor, but apart from that, you have to be patient as she warms to the task.” 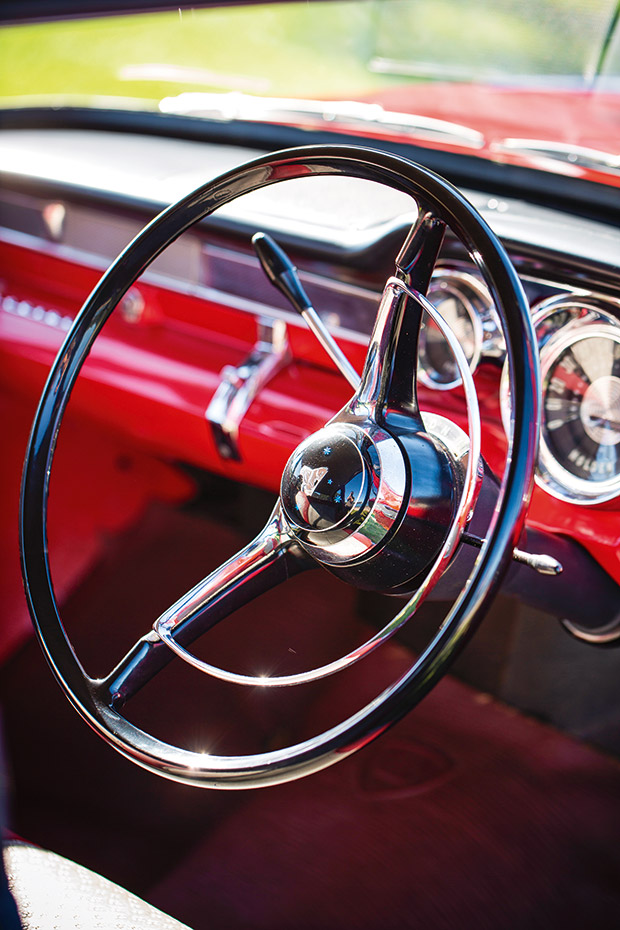 Conditions were favourable all the way to Tīmaru. “We had to deploy the intermittent wipers to clear a bit of drizzle in the Stokes Valley, and that was it.” The first of four overnight stops was at Taihape, by which point Merv and Vicki had every confidence in the car reaching its destination without incident.

“You’re always listening, observing and thinking ahead in an old car, and nightly fluid checks are routine, but she came through just fine.”

For the record, judges placed the car second in its category at the nationals, narrowly beaten by a nicely restored EK model. And by the time they finally reached Queenstown to be greeted by the car’s delighted new keepers, the Special had consumed 400 millilitres of oil by Merv’s reckoning, which isn’t bad considering it had covered more than the car’s average annual mileage in a few days.

Holden manufacturing ceased in 2017, but New Zealanders’ love of classic Holdens is undiminished. In the Files’ case, it is reflected in the enthusiasm of three generations. 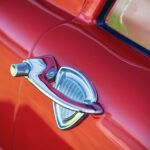 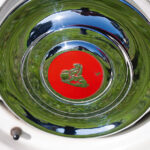 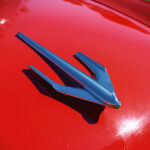 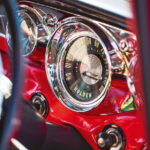 “Troy will now take the car to the next level,” Merv suggests, “doing what I can’t do — pulling out the motor, replacing gaskets as required, and tidying the engine bay. But he’ll endeavour to keep it as original as he can.”

The EK Special is also destined for more occasional family use, notably weekend outings and car club runs, albeit in a different Central Otago climate. But Merv has a hope: “With freezing temperatures around the corner, it should be tucked up with a heavy blanket to emerge in the spring when it turns 60.”