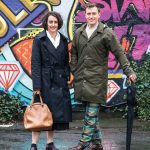 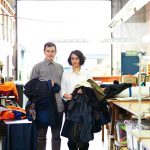 “When you walk through the centre of Wellington at 7.30am everyone is in a puffer or a jacket made by an outdoor company – both good for tramping but not great over suits mid-city,” says Nevada. 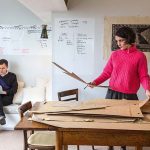 Nick and Nevada in work mode at their flat above Oriental Bay. “We’re proud to be developing a brand that holds social and environmental responsibility dear to its heart. We believe it has to be a given for our generation.” 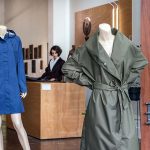 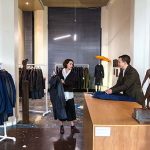 The couple are passionate Wellingtonians. There is a groundswell of young entrepreneurial people living here, a burgeoning IT industry and a great vibe. 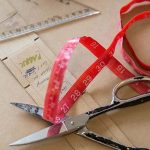 Working in the Okewa pop up store reinforced their core vision of growing a socially responsible brand, made locally. 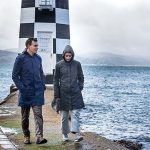 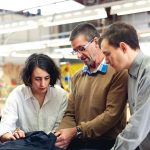 The rain fell down and a solution popped up – a young Wellington couple has designed a collection of classy raincoats that are making a splash.

On the seaward side of Te Papa where the winds are clobbering and the rain is horizontal, a girl from the Bay of Plenty (who never wore a raincoat) and a boy from Southland (who wore one every second day) realized they had a meritorious idea for a new range of smart waterproof coats for men and women.

“We’d poured over buckets of water and used hoses but when we trialled the coats in bad weather in the windiest spot on the Wellington waterfront we knew they could perform,” says Nevada Leckie, who developed the brand along with her husband, Nick.

Climatic conditions in the capital have been a catalyst in the tale of Nevada and Nick – both aged 27 – and their Okewa brand. Renting a one-bedroom flat in a villa above inner-city Oriental Bay, the car-less couple’s desire to arrive at work dry and looking decent propelled their design of an elegant, dependable rainproof coat oozing global style.
“I love beautiful tailored lines and I know puffer jackets are warm but they’re so ugly,” says Nevada. “When you walk through the centre of Wellington at 7.30am everyone is in a puffer or a jacket made by an outdoor company – both great for tramping but not great over suits mid-city.”

Armed with a combined artillery of skills and a substantial ethical spirit, Nick, a graduate architect, and Nevada, a graduate of Massey University’s Diploma in Fashion Design and Technology, a freelance pattern-maker and long-time disciple of her sewing machine, embarked on a two-year development process around the demands of their day jobs.“We followed our gut instinct because we saw a gap in the market. It seemed there were no [dedicated] raincoat labels coming from New Zealand, Australia or even Europe.”
During Māori Language Week in 2014 the name Okewa – meaning large grey rain cloud – plopped into their laps.

“It’s such a beautiful word in every way.” In her spare moments Nevada created calico prototypes and sewed them up at her kitchen table in Oriental Bay hoping they would translate into beautiful rainproof coats. The couple invested $15,000 of capital into the purchase of high-technology waterproof fabrics from two Bluesign-approved mills (a Swiss-based standard for sustainable textile production) – one in Japan, the other in Korea – both recognized for excellent workplace practices. They procured the services of a family-owned manufacturing operation in South Auckland and creative campaign strategist Anna Dean – publicist for the high-grossing Kiwi film What We Do in the Shadows – tweaked Okewa’s marketing strategy.

Nick drew up a business plan on magnetic white boards in their pint-sized sitting room and in mid 2014 they launched on Kickstarter – the global funding platform for creative projects.
“We had a launch party at a bar in Dixon Street where five friends wearing Okewa coats circled with iPads. It was an incredibly happy moment,” says Nevada.

The outcome was enhanced happiness for Okewa. Their Kickstarter debut landed 250 pre-orders – surprisingly over half from Europe and USA – and raised $50,000 for their first production run. There have been two further production runs, two new ranges and a pop-up store in the capital last October in collaboration with well-known designer jewellery company The Village Goldsmith. More than 100 Okewa coats walked out the door, including one on the shoulders of Kiwi comedian Jermaine Clement.

Nick and Nevada say the coal-face customer experience of the pop-up store reinforced their core vision of growing a socially responsible brand.
“People want reassurance we know the story of our own product. The tide is turning against fast fashion and the big labels because of worker exploitation. New Zealanders want a slower, more organic product – we want less but better quality and we want local. People now think hard and give great consideration before buying clothing. An Okewa coat is a decade-long investment,” says Nick.
Okewa coats retail for between $495 and $795 and the range includes five coat styles for women and three for men. Nick says using natural fibres is the couple’s preference but the challenge is to ensure a fabric can meet Okewa’s technical performance standards. 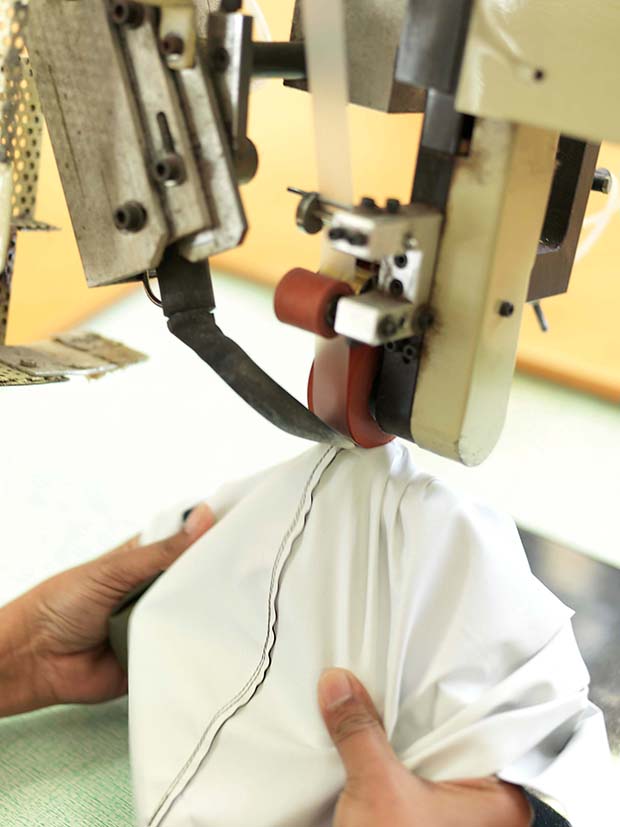 “We are starting to work with wool-blended and cotton waterproof textiles together with merino linings for colder climates, all with an eye to be using natural fibres as much as possible.” The future also beckons with some big-looking Okewa objectives. Currently Okewa is available on line or from the couple’s home studio but demand has fuelled consideration of stockists in Wellington, Auckland and further afield.

But the potential to dip their toes in the global marketplace will not change Okewa’s engine room in a villa high above the harbour where Nevada sketches, sews, orders buttons, linings and cord stoppers, packages coats for dispatch, liaises with her manufacturer, manages the website and keeps an eye on the weather as it sweeps across the bay.

The couple has now trimmed back to three days a week in their respective jobs to focus on Okewa – Nick with Bell Kelly Beaumont Team Architects and Nevada as the practice manager of a Pilates and yoga studio.

They recently had a dedicated strategy session to focus on Okewa’s big-picture vision.“We caught the train up to Plimmerton and had a weekend at a little place by the sea we found on Airbnb where we talked and dreamed. It was magical.”

More stories you might like:
A Behemoth tale: Meet the brewer behind the tongue-in-cheek craft beer and Auckland's upcoming brewery Churly's

ON FASHION, ARCHITECTURE AND SEWING MACHINES

Nick: “I wasn’t a Swanndri guy but I had awful street wear. After high school I had a year in France, which was a pivotal experience. It locked in architecture as the way ahead – I love the merger science and arts – and it did a lot for my personal style.”
Nevada: “I’ve always sewed my own clothes and some have been outrageous. Mum had a big fabric cupboard. I love the creativity of constructing garments and can get lost for hours. I started an English literature degree (which I’ve since finished) but realised I should study textile design when I was sewing instead of studying the Romantics.”
On love: He spied her across the dining hall at Weir House, Victoria University. She mended his jeans. They married, aged 22, in an avocado orchard near Tauranga – Nevada in a long, flowing Grecian-style dress she designed and made. “We wanted to be partners in life. It was great to commit and it’s been fantastic building a life together and bouncing ideas and ambitions,” says Nick.

BEST TIPS FOR STARTING A BUSINESS
➜ Be bold – ask for help. There’s a huge amount of goodwill out there. People are eager to help a young business.
➜ Take your personal passion and belief into the marketplace – people will want to buy into your story.
➜ Branding is essential – get it right before you open the door.
➜ There is a real need to nail social media; there’s no place for mediocrity. It has to be sharp and sassy.
➜ Prepare for total immersion – your idea will consume every moment of your life. You’ll be working seven days a week.
➜ Be ready to take your idea wherever it wants to go.
➜ Keep a tight rein on cost margins. “Our hardest lesson was making the mistake of packaging our coats in boxes that were far too expensive. Now we use lovely tissue, a logo sticker and a handwritten note – it’s even better.”