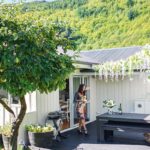 Pauline and Valentina eat outside at every opportunity. 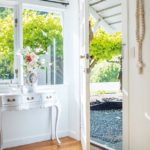 The sunlit entrance to Pauline’s Arrowtown cottage is blessed by an oversized rosary. 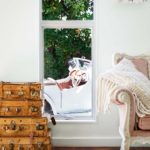 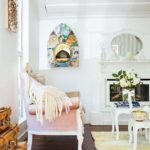 The sitting room is home to one of Pauline’s favourite artworks – the Arch by Marita Green, made from antique cake and cookie tins. 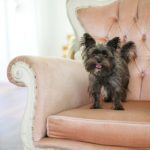 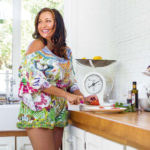 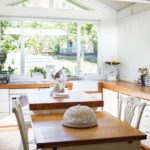 The kitchen was renovated over the course of last year. The finish on the wall is from re-surfaced antique tin tiles picked up from Dunedin’s demolition yards. 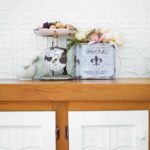 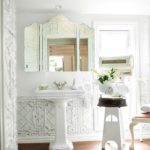 The bathroom’s antique tin tiles came from the ceiling of a theatre in Dunedin and Pauline is intrigued by the thought of who may have sat beneath them. 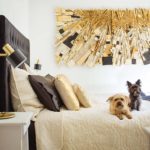 A Louise McRae work shares the room with Honey and Hugo. 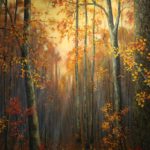 An artwork by Rachael Errington. 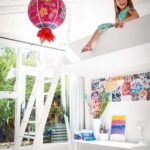 Valentina happily playing in her room. 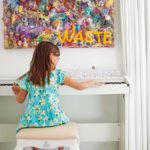 Valentina plays the piano in front of an artwork by John Shewry called Waste.

A Queenstown art gallery impresario trusts her gut to manifest a mantra for success.

Pauline Bianchi has just touched base with her life coach to reaffirm refrains for the art of life, something that is important to the gallery founder and mother of six-year-old Valentina.

“One of the first things I do upon waking is make a plan of how I’m going to manage motherhood for the day. Then I start talking to myself.” 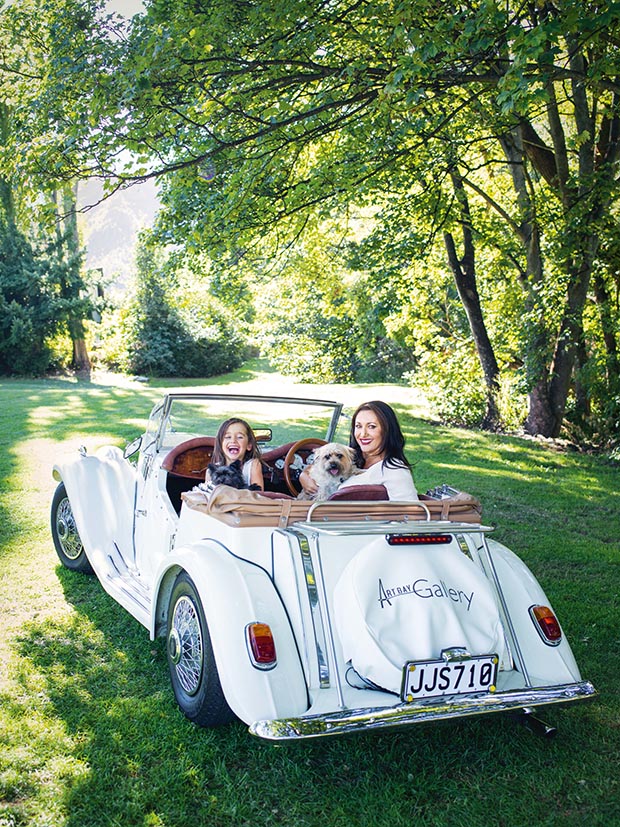 Expressing gratitude for her happiness – if not her life after a fall on black ice caused a traumatic brain injury from which she is still recovering – Pauline’s personal mantra focuses on being thankful for the chance to share adventures and magic times with the people she loves. Her professional one celebrates being able to work with passion, love and integrity.

Pauline, who is just about to celebrate her 13th year in the business, describes herself as quietly bolshy with an unconventional, holistic approach. She believes in and has a deep admiration for universal energy, which she sees as giving in order to receive. And in setting up the Artbay Gallery, not only in a traditionally male-dominated profession but also inside Queenstown’s 173-year-old masonic lodge (once practically the lighthouse of patriarchy in the province), she asked much of the universe. As she did of her architects, the Historic Places Trust and a feng shui expert in attempting to meet the requirement for the building to be entirely rebuilt inside so that paintings could be hung. 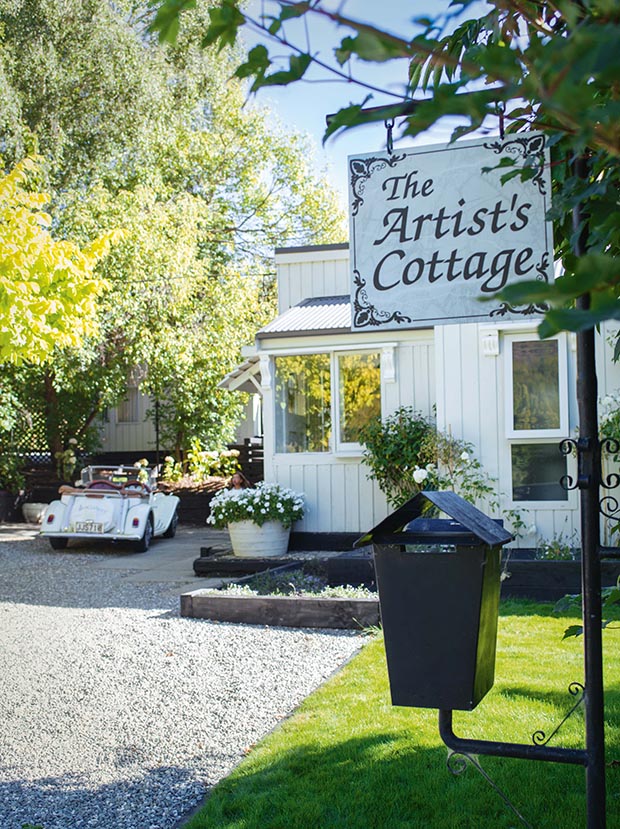 Others might have faltered but Pauline is ruled by her intuition, literally a gut feeling. She says this deep burning in her stomach has never steered her wrong in making the big decisions. Her occupancy of the former masonic lodge is one such example. She heard a whisper that the masons might be looking for a tenant, met with them and within an hour made an offer and a week later the tenancy deal was done.

More stories you might like:
Why this upcycling couple built their colourful, 100sqm eco home next to a train track

Today she runs two galleries, both in Queenstown, one housed in the oldest building in town, the other in the newest. By happenstance they are right across the road from each other. The galleries represent 50 award-winning artists who she says are selected for originality and diversity. 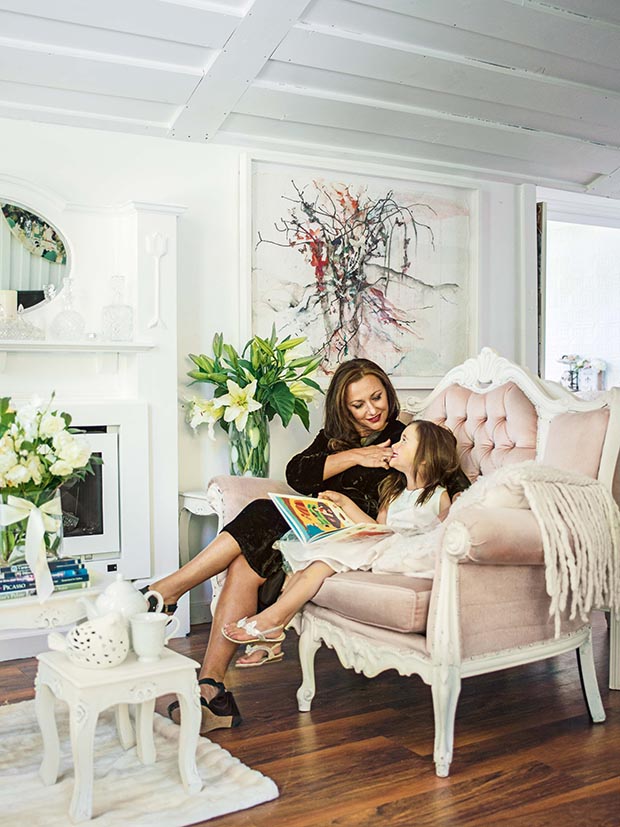 Pauline and Valentina in the sitting room, enjoying some quality time.

According to Pauline, galleries can be bare silent rooms where people walk around, hands clasped behind backs, looking serious. She tries to make Artbay different. “A good art space is big enough for visitors to gain perspective on the work, but appeals more if all the senses are taken into account – great music, aromatherapy, a documentary film, artwork that is actually touchable, the artist painting in the gallery… even taste. We offer Jaffas to everybody who enters, hold wine tastings, and open champagne to celebrate a purchase.

“My purpose is to bring the art world into people’s homes and hearts. Art and elitism needn’t go hand in hand – there’s no need for stark, uninviting galleries. Great art creates great thought and great conversation. Art can take people into another world, a kaleidoscope of memories and the future.” 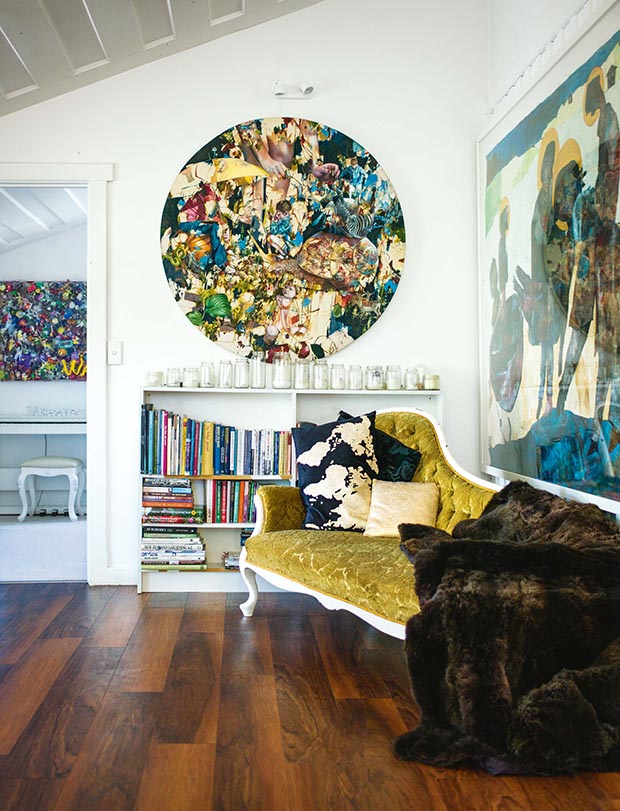 Pauline says people shouldn’t worry about thinking they don’t know much about art.

“It has to resonate with them, evoke, inspire, arouse emotions in a moment. Having an art collection grown over a lifetime is a wonderful vehicle for expressing your personality. Ten, 20, 30 years later, the art on your walls will be a scrapbook of your life and the places you’ve been.” 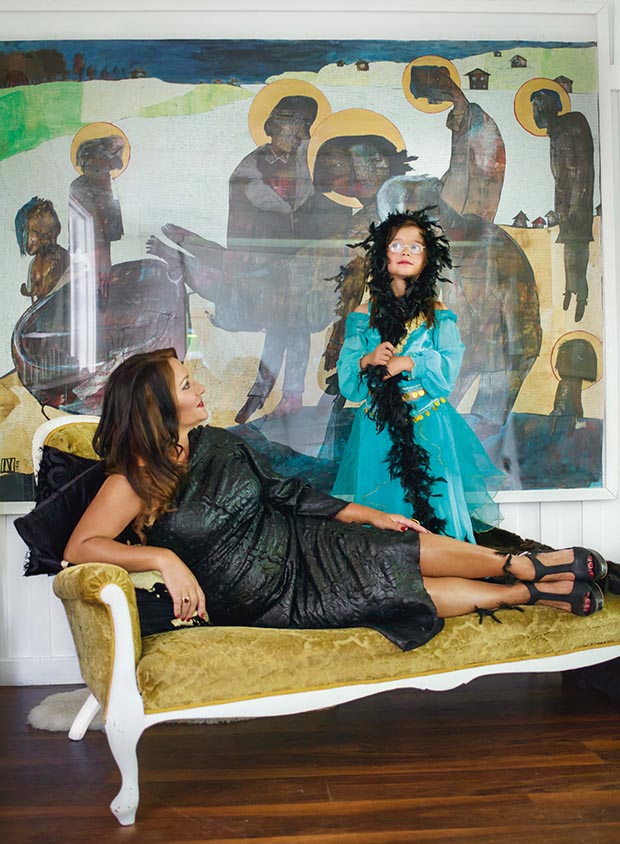 Pauline and Valentina on the chaise lounge, another Trade Me purchase. Behind them is Pauline’s
favourite Ilya Volykhine painting.

She has also invented an app that allows people to see a painting “on their wall”. Visitors to the gallery bring an image of their home space, select the artwork they like and by using the app can view it in place.

Pauline says the app has been instrumental in her making sales to people who live overseas.

“We get orders from Russia or Canada, very often because they’ve been in the gallery during the tourism season. Global delivery makes original, authenticated New Zealand art a wonderful souvenir of their travels.” 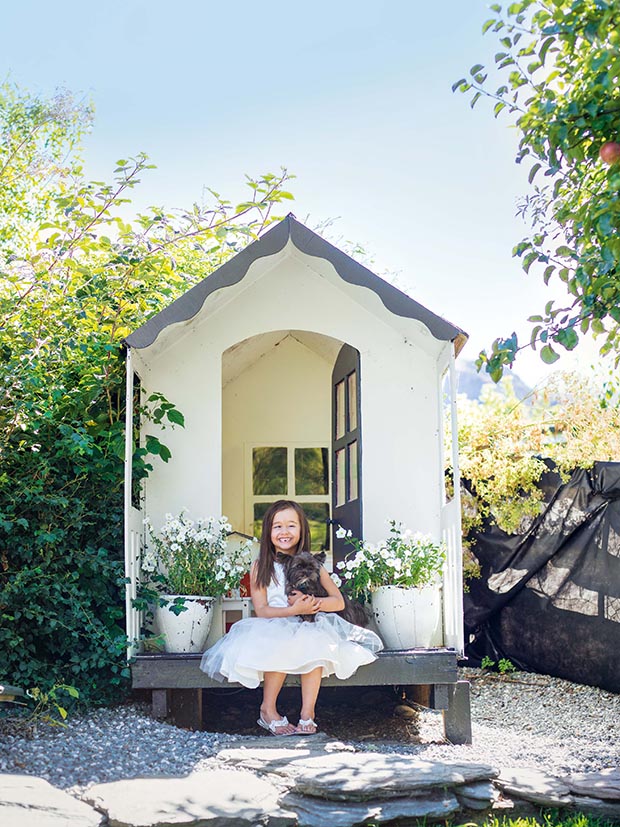 Valentina on the step of her play house with the flowers she has grown and Hugo, the silky maltese.

She says New Zealand art seems to be powerfully attractive to tourists.

“The artists channel the essence of the country, its uniqueness, nature, history, and Māoridom … art infused with its own integrity. Being around it, with new pieces coming in every day or every second day is utterly thrilling.” 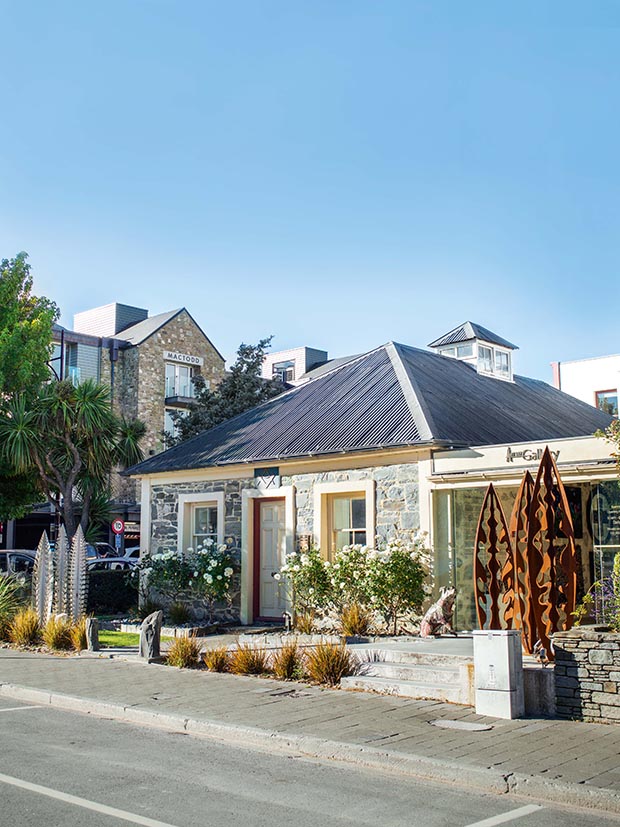 Artbay Gallery, Pauline’s main gallery, where a permanent collection of 50 artists is housed.

Despite the covetousness that can arise as the bubble wrap is removed from a delivery, Pauline likes to keep life simple. Perhaps this is linked to her ongoing recovery from that slip on icy steps that led to the brain injury. It has been a long road back from those early days when the initial exhaustion of the first three months was just shocking.

“I’d get up, give my daughter breakfast, have a 15-minute window where I could read an email and then be so tired I’d have to go back to bed.” A transcendental meditation course helped, but two years into what is generally a five-year ordeal, the fatigue and insomnia remain flattening. Hence the latest burning thing in her stomach: a call to renovate the architecture of her life saw Pauline buy a bach in the seaside community of Karitane. “My life now has ocean and mountains and allows for the simple pleasures of nature by the coast, growing my own greens, and just being. That makes me happy.” 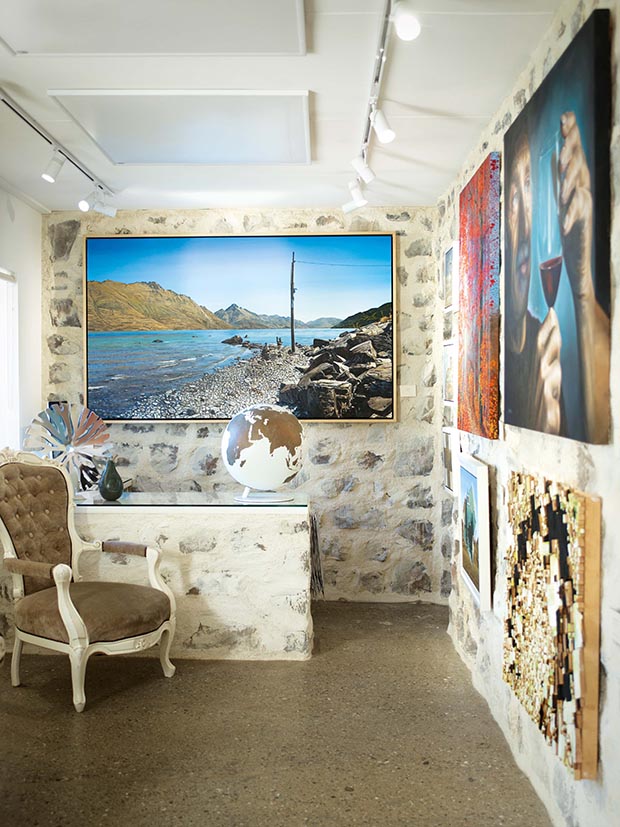 The front room in the main gallery features a Sam Foley oil and handmade globe by Luke Calder.

And should her happiness need a reset? “I make time for a special moment every New Year’s Eve. I take myself off somewhere alone for a few hours with a bottle of Veuve Clicquot and make a list of my goals for the next year. Later that night, the fireworks go off and so too do all my dreams and aspirations for the year.

“Everything is out there, you just have to wait for the universe to bring it.” 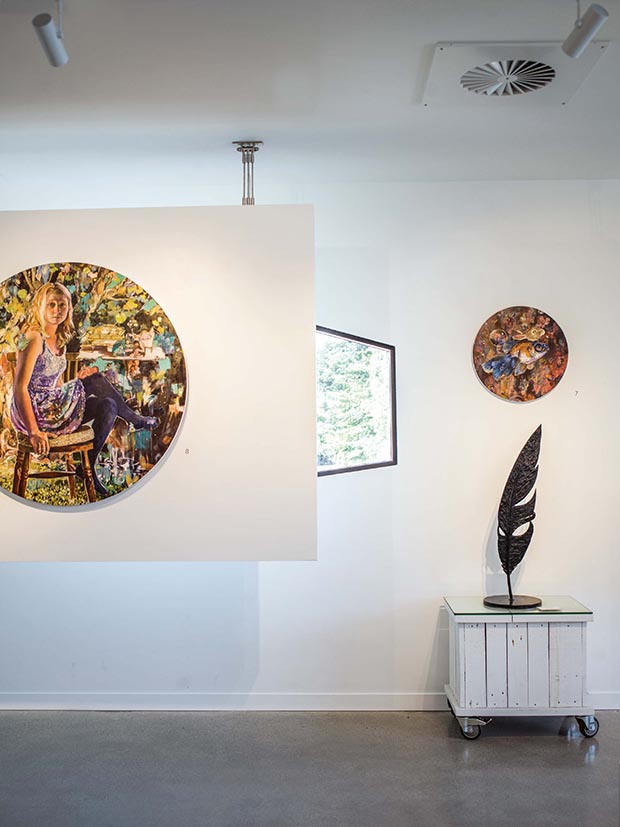 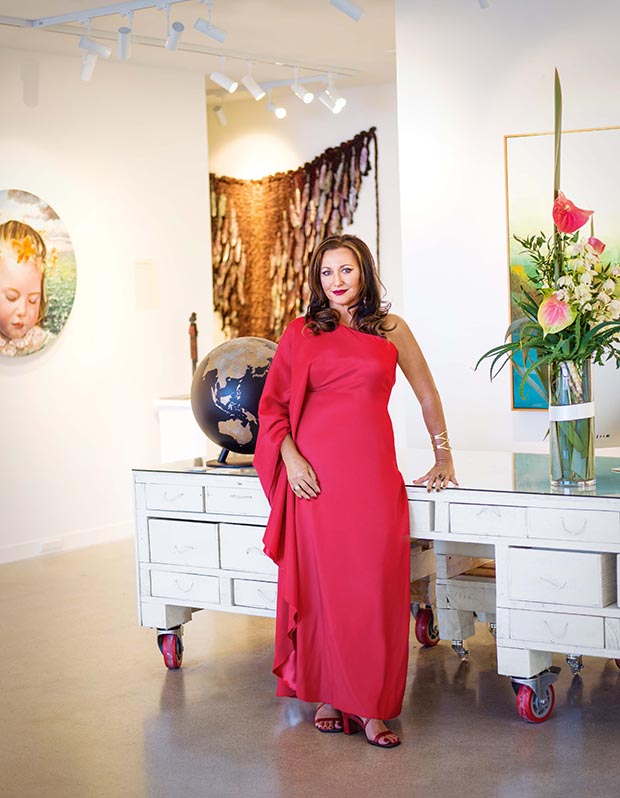 “My approach to business is holistic. This may sound unconventional, but I have a belief and deep admiration and respect for universal energy. If you are giving, kind and loving, then this is what you will receive in return in all areas of your life: your customers, staff, family and friends. I live by my two mantras, one for business and one personal. I say these every morning and night – and feel them with conviction. All of this is supported by what I call a ‘reality board’, images of what I see and feel. It’s the last thing I look at before the light goes out every night. I started out with little 13 years ago, but I have a belief and faith that if I can see it, it can be done.  It’s this belief that’s created a life that feels meaningful.” 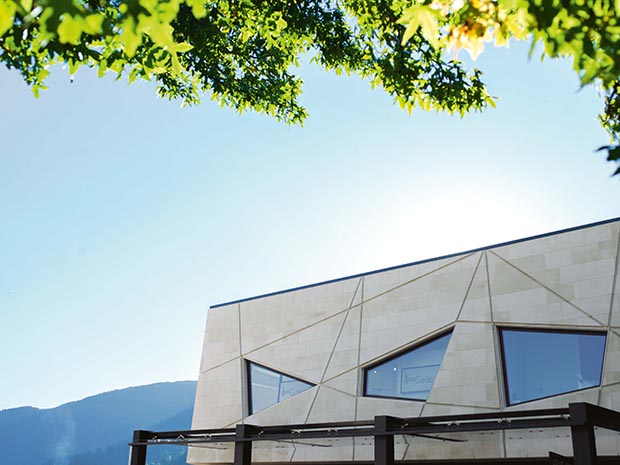 The new Artbay Gallery, Queenstown’s newest building, is right across the road from the main gallery.