A comprehensive guide to growing, using and cooking with daylilies 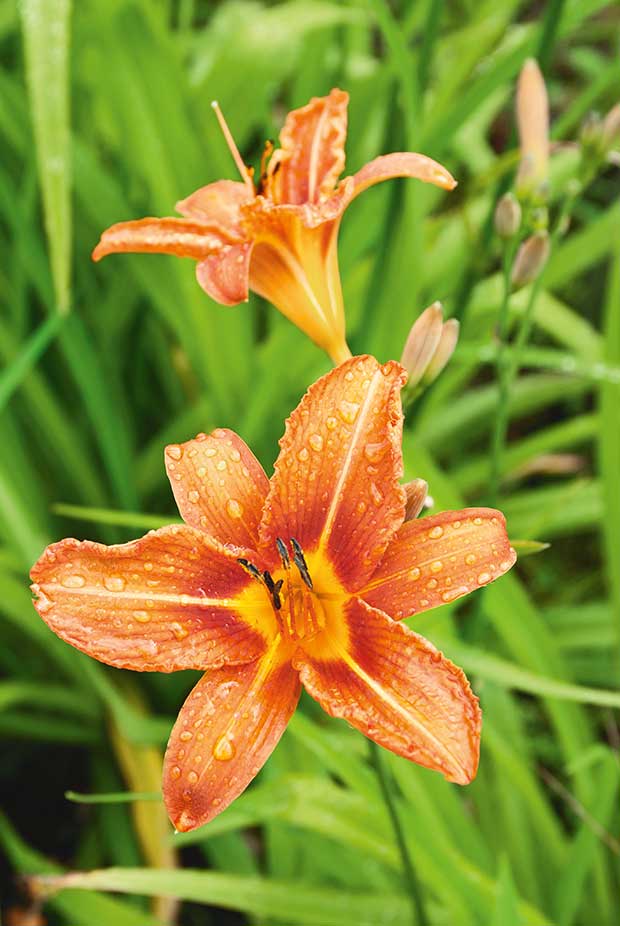 If you love daylilies, you’ll be delighted to know they’re a delicious option in the kitchen too.

The daylilies in my garden were on notice of imminent removal when I discovered they were edible.

My twitch-ridden plants are about as far away from the kitchen as they could be. That they are edible was the last thing I would have imagined.

I do enjoy their early summer show. They assert their presence with showy, trumpet-shaped blooms in glorious, bold colours. Orange, bronze, yellow and mahogany-red. They remind me of lions and tigers.  But eating them had never crossed my mind.

However, in the Far East the daylily (Hemerocallis sp.) is a delicacy, more often grown for its food and medicinal values than its exotic display. All parts of the plant can be eaten, from young leaves to the white-fleshed rhizomes.  Most highly prized are the young flower buds and blossoms, which have a sweet, flowery taste and a sticky, jelly-like texture. They also contain good amounts of protein and Vitamin A.

In Asian markets, the slender, golden-caramel coloured flower buds are sold dried or fresh as gum jum or golden needles. Their earthy, sweet flavour complements steamed or stir-fried dishes, hot and sour soups, daylily soup, and mooshoo pork.  The roots are eaten too, lightly cooked or raw. They have a crisp, sweetish, nutty taste, rather like salsify. Even if eating them does not appeal, there are plenty of other reasons to grow these versatile perennials. 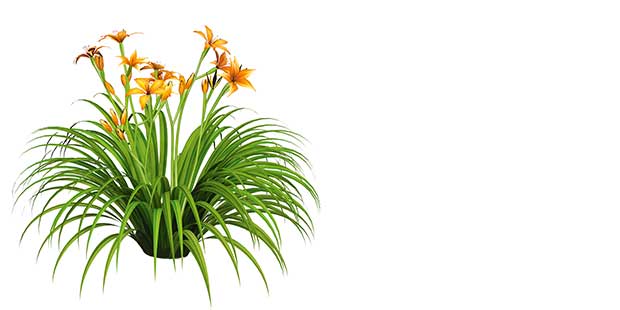 THEY PUT ON A BEAUTIFUL SHOW

Hemerocallis comes from the Greek words ‘hemera’ (day) and ‘kalos’ (beauty). The exceptionally showy flowers and the plant’s hardiness have made these natives of Asia popular around the world.

As the name suggests, most flowers open for a single day. Some varieties last two to three days, and a few open in the evening. A well-tended clump may produce as many as 400 flowers over 40 days. The trumpet-shaped flowers have six large petals, six long stamens, and a central style. Each flower stalk bears 6-8 flowers.

They are an excellent substitute for lilies. As a cut flower they will not last as long but they make up for it by their adaptability – surviving and thriving where lilies won’t – in drought, cold, and clay, you name it. They flower well in sun or shade. They look great along the sides of paths, in light woodland, and on banks.

My primitive, impoverished collection is a microscopic selection of what is available. But daylilies are a prized garden perennial, and popularity is demonstrated in the effort expended on breeding. A whopping 80,000 registered cultivars have been developed from the 19 recognised species, with hundreds being added yearly. (Warning – not all of them will taste good!).

Hybridisation has vastly extended the colour palette from the yellow-orange-pale pink of the genus to reds, purples, lavenders, greens, near-black, near-white. There’s no true blue (yet), in spite of efforts.

Desirable breeding traits in the flowers include the large flower size, ruffled edges, and contrasting ‘eyes’ in the centre. There is even an illusion of glitter called ‘diamond dust’. Romantic names have been rhapsodised, which confusingly often fail to include their species parentage. Those that have gained The Royal Horticultural Society’s Award of Garden Merit include Beauty to Behold, Mahogany Magic, Fooled Me, Moonlit Masquerade, and Cat Dancer.

The result is that there is a daylily for almost any garden, from short to tall, with single, ruffled and double flowers, and flowering times from early to late summer.  Hemerocallis fulva – probably what’s in my garden – is a common species, typically in shades of orange, sometimes coloured with bronze, yellow or red. It is also often known as Tawny Daylily, Tiger Lily, Roadside Lily and Ditch Lily. Less auspiciously, it was named as the Outhouse Lily because people would plant it near outdoor toilets.  They are on planting lists for gray water wetlands, an attractive proposition for septic tank fields.

Despite persistent neglect, my daylilies have never missed a beat. Apparently they prefer wetter soils, but mine survive hot summers, just out of reach of the sprinklers. They seem impervious to pests. The only problem I’ve had is invasions of twitch and I can hardly blame them for that.

It seems I may have to rethink my plan to toss my daylilies and find a more kitchen-accessible spot to grow them. With a little more TLC we could be enjoying better and bigger flowers and harvesting some of the excess for the cook to experiment with.

WARNING: YOU WANT DAYLILIES, NOT LILIES.

Daylilies look a lot like lilies but they’re not true lilies. Worse, true lilies are poisonous, so you don’t want to confuse them: 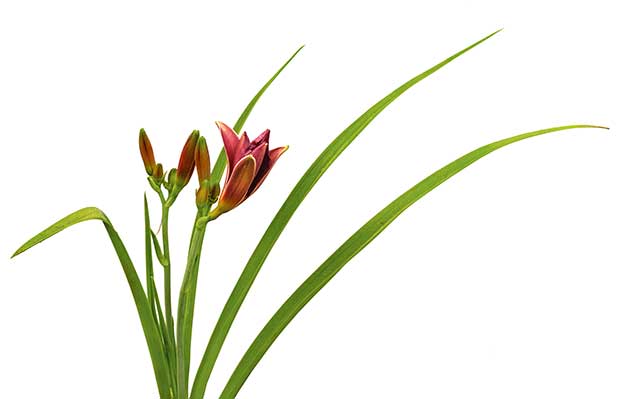 • grow from clumps of long, edible white-fleshed rhizomes;
• have long, strap-shaped foliage with pointed tips, arching from a central crown at soil height;
• flowers are made up of two layers of petals (technically the top layer are petals, the bottom layer are sepals) and only last one day. • have one central, unbranched stem from a bulb;
• leaves spiral off the stem and up around it;
• flowers are at the top of the stem;
• each flower has six petals, and open in sequence from the bottom bud to the top;
• each flower lasts about a week.

4 IMPORTANT THINGS TO KNOW ABOUT DAYLILIES 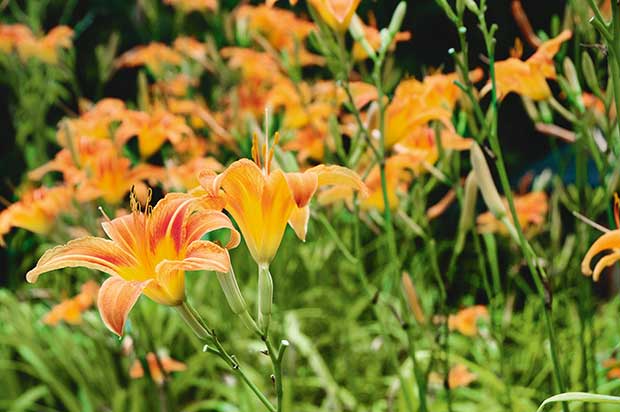 A very small number of people are allergic to H. fulva, usually when its raw, giving them stomach upsets and diarrhoea. It’s best to start with small amounts, cooked, to see how you react. Eating excess amounts of flowers and leaves may sometimes cause diarrhoea.

The raw leaves, eaten in large quantities, are said to be hallucinogenic, though this has not been proven by research.

Daylilies (Hemerocallis sp.) and true lilies (Lilium sp.) can be toxic to cats, causing stomach pain, renal failure and death if untreated. As little as two leaves or part of a single flower have resulted in deaths. The whole plant – petals, stamen, leaves, and pollen – are toxic.  We have two eight year old cats who have lived alongside our daylilies their whole lives and we’ve never had a problem, but there are cats that will eat them. The best treatment is to remove plant material from the stomach and treat with aggressive fluid therapy within 24 hours.
Sources: A retrospective study of daylily toxicosis in cats (2003); Lily toxicity in the cat (2010).

HOW TO GROW DAYLILIES Daylilies are extremely adaptable to temperature, growing anywhere from cold, hard winters through to the tropics. Some hybrid varieties bred in different climates may be less adaptable. In cold areas, a winter mulch helps protect rhizomes (and keeps weeds down), while in hot areas, a little shade is beneficial. 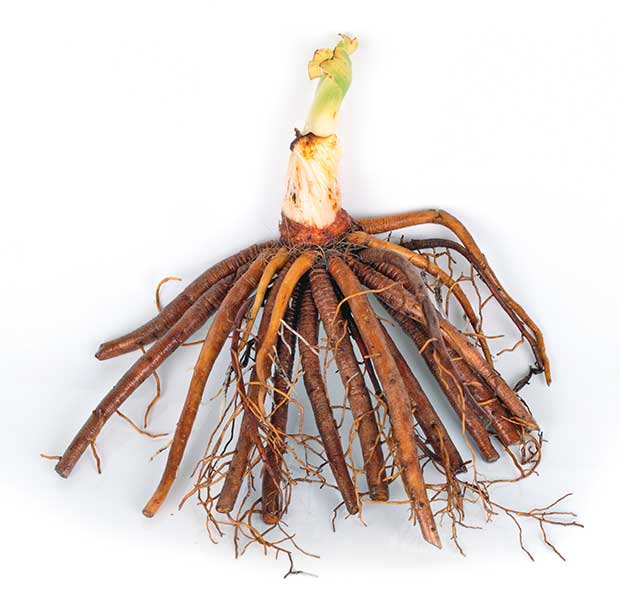 They grow best with regular moisture and an occasional topdressing with blood and bone. Rhizomes vary in vigour. Some form tight clumps, others spread outward. If they spread, divide them every three or so years to encourage more flowering. Plant divided portions in enriched soil just below soil level, in a hole twice the size of rhizomes. Bare-rooted divisions will last a remarkable length of time tossed in the garden shed before replanting!

HOW TO USE DAYLILIES IN YOUR KITCHEN 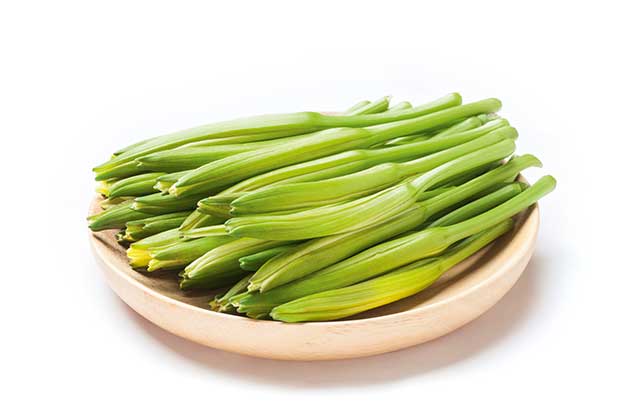 Have you got the right lily?
First, make sure you have identified your plants! Daylilies look similar in appearance to lilies, which are poisonous.

Do a taste test
There is very little research on the edibility of the thousands of varieties available. Taste reports from a USDA trial on a range of cultivars showed not all daylilies were equally delicious. Descriptions ranged from ‘light, mild, sweet, sightly peach-flavoured’ and ‘salad-like, peppery, earthy’ to ‘bitter, with a bad off-flavour like dirty lettuce’. Taste was related to cultivar more than flower colour. Before eating any daylily, a taste test is highly recommended. Try it in very small amounts, sticking with the roots, flowers and flower buds. 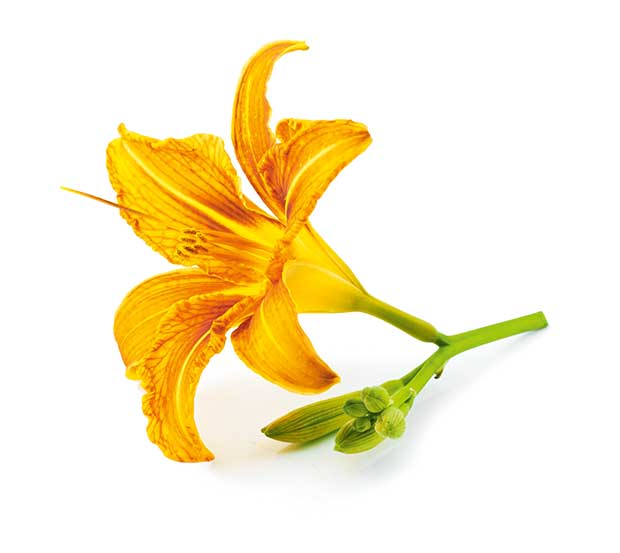 • Fresh flowers make a beautiful edible garnish, and whole flowers make a stunning container for dips, cheese or grain salads.
• Petals have a crisp texture and make great crudités for dipping. They can also be scattered whole, chopped onto salads, or incorporated into herb butter, soups and egg dishes.
• Whole flowers can be battered and sautéed in oil, or filled with cheese or rice, then dipped in batter and sautéed.
• Dip flowers in batter and cook as for tempura.
• Young buds can be added raw to salads, or pickled like kimchi. 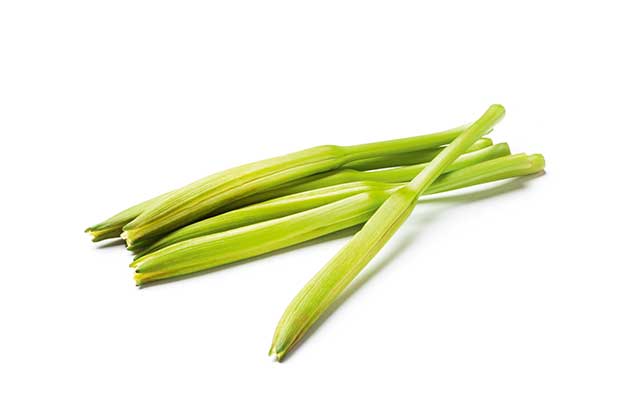 • Small tender roots can be eaten fresh in salads.
• For larger rhizomes, boil for about 10 minutes, then eat like a vegetable.
• Wash thoroughly and slice rhizomes and either:
– stir-fry with other veges;
– add to soups and stews;
– mash with black pepper and a little cream or yoghurt, and tasty cheese, then form into fritters and lightly fry. 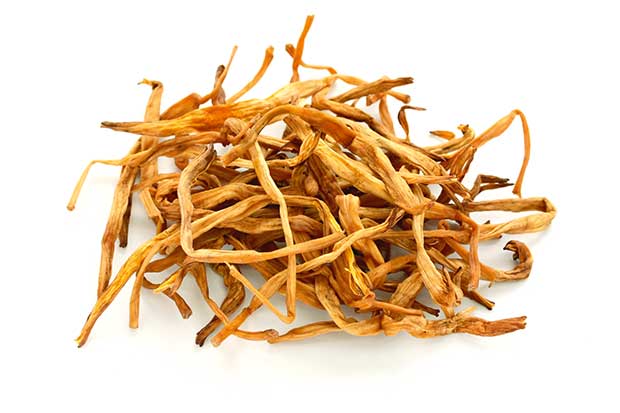 Suss out an Asian food store and you should be able to find golden needles in clear plastic packs. Choose buds that are a pale caramel colour and pliable. Store in a sealed container away from light as they darken with age.

To use:
• Soak in warm to hot water for about 15 minutes until soft. Remove any hard stems and use whole or shredded.
• Steam with strips of skinned, boneless chicken thigh fillet, fresh or rehydrated mushrooms, a little soy, ginger and Shao Hsing wine. Serve with rice.

How to harvest your own
• Harvest daily – as their name suggests, they usually only last a day. Buds can be harvested until the day before they open.
• To use immediately, swish in water to remove bugs. Remove pistils and stamens and place face-down on a tray or plate lined with a paper towel, so they drain and stay open until ready for use. They will last a day in the fridge.
• To dry for later use, place on baking sheets in an oven with a pilot light on or the oven light turned on until they are free from moisture. Store in labeled glass jars, out of direct sunlight, until next season.