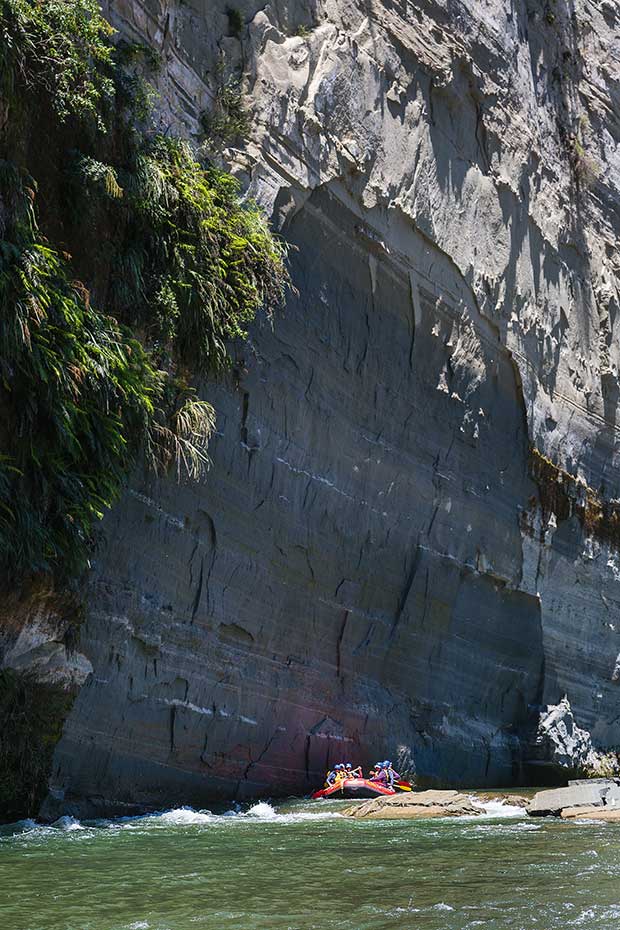 Characters, curiosities and intrepid opportunity lie around every corner of one of New Zealand’s longest rivers.

Peter Mcintyre, famous World War II artist, captured the spirit of the Rangitikei valley where he spent so much time in watercolour landscapes and words. He wrote: “The river is so deep between high papa cliffs that at the bottom where the river runs it is merely twilight even on a sunny day.”

Travelers in the central North Island may admire the white mudstone cliffs (papa) that rise alongside the Rangitikei River and are a feature of State Highway 1, but the upper reaches of this historic waterway are inaccessible to most. 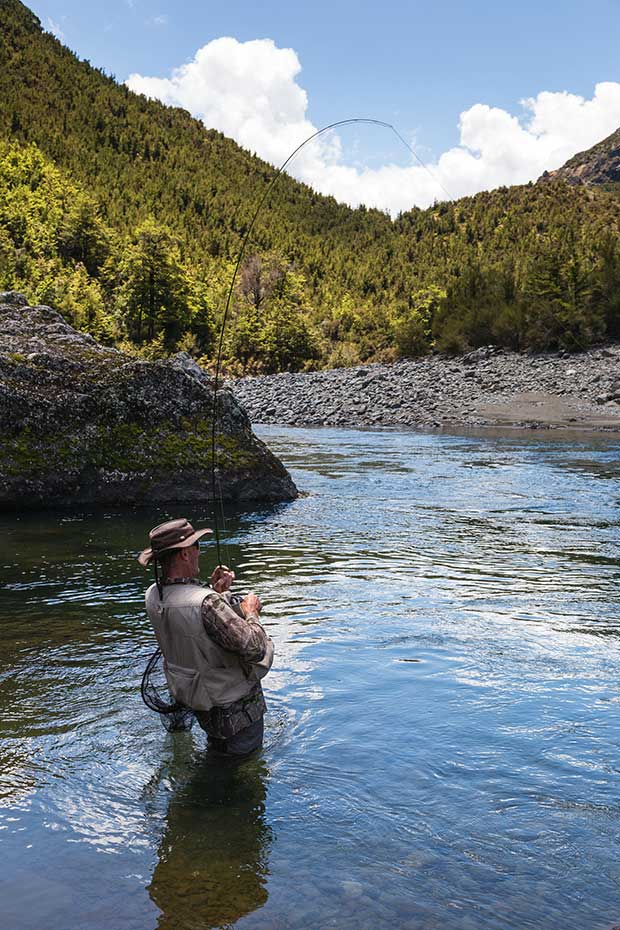 Fishing guide John Gordon tests the waters. “There is no sediment in the upper reaches of the river,” he says; at Rathmoy Lodge.

Born in tussock lands southeast of Taupō in the Kaimanawas, the river runs 185 kilometres to the sea, flowing from the central plateau to reach the Tasman at Tangimoana, near Bulls. The Upper Rangitikei region was most likely first populated at Mōkai Pātea by forbearers of Ngāti Te Whiti who roamed the foothills and forests for food and had a number of walking tracks over the Ruahine Range.

One of these was the route of the missionary and botanist, William Colenso, who provided the first written record of the area; few people today know where these tracks were. 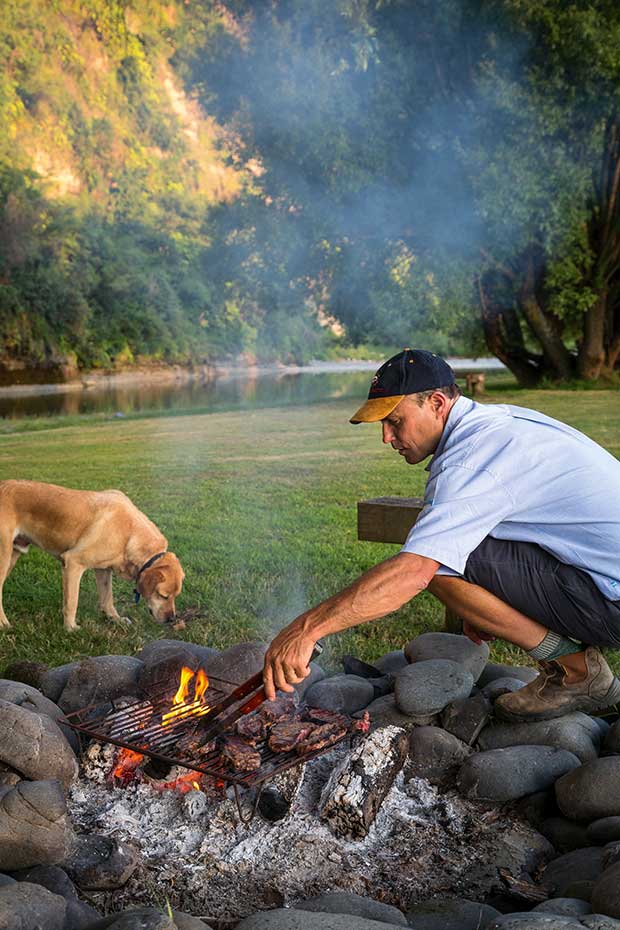 Mark Grace tends the coals of his campfire barbecue as golden labrador, Max, waits for a morsel.

A determined tramper might reach the rugged and remote upper region in three or four days, but the alternative is to take a helicopter and fly northward 30 kilometres in a direct line upstream.

It can be a scary ride, zig-zagging the tortuous bends of the winter-raging river but ultimately landing where the water has become a comparative trickle. Here an expert in quiet pools can land three trout in 25 fishing minutes. A zigzag track up the hill opposite The Lodge at River Valley is a good place for a morning walk. Campers reach this by pulling themselves across the river in a cage suspended by wire ropes – a lot of fun but don’t look down.

A short distance from Gravity Canyon in the middle river – a place known for its giant swing, bungy and extreme flying fox above a 100-metre, sheer-sided gorge – is Tarata Fishaway Lodge. Set in a grove of native trees are two chalets, each with panoramic views of the waters below.

It’s a popular destination for fisher folk and those seeking the peace and quiet to absorb the timeless spirituality of the river. 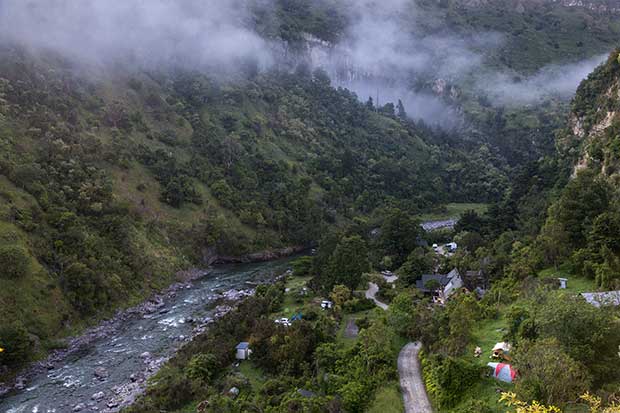 Morning mist wreaths the hills far above the River Valley Lodge. This is a remote place where forest remnants and rushing water make for an unforgettable adventure for the young and the not so young.

River Valley, an adventure lodge 30 kilometres east of Taihape, is a hideaway that’s surprisingly busy with young and old voyagers who come from around the world to raft grades from calm to extreme.

The spectacular reaches downstream can be explored for many hours as the river negotiates several easy rapids past patches of virgin forest – white pines, totara, giant tree ferns and old kanuka. 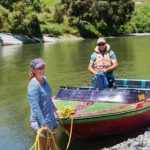 Watched by Alex Dalgety, daughter George moors the jetboat on a shingle bank below Mangaweka. It’s been a 35-kilometre trip upstream from Ohingaiti to see the cannonball concretions. 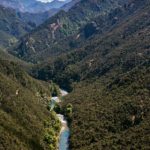 The upper reaches of the river pass through rugged country – Waiouru military land occupies the right bank while the far corner of Ngamatea Station is on the left bank. 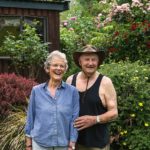 Robyn and Brian Sage, founders of River Valley Lodge, retired many years ago. They live in a house perched on the edge of a ‘rim rock’, 200m above the river.

Native orchids and seldom-seen native oxalises cling to rocks within a paddle splash as waterfalls drop down perpendicular cliffs clad in moss and ferns.

The river gorge is so deep and so isolated that there are few glimpses of the surrounding countryside. Some cliff faces are curiously marked by time and the ravages of wind; lines of ‘rim rocks’ denoting ancient sea shores stud the entire district. 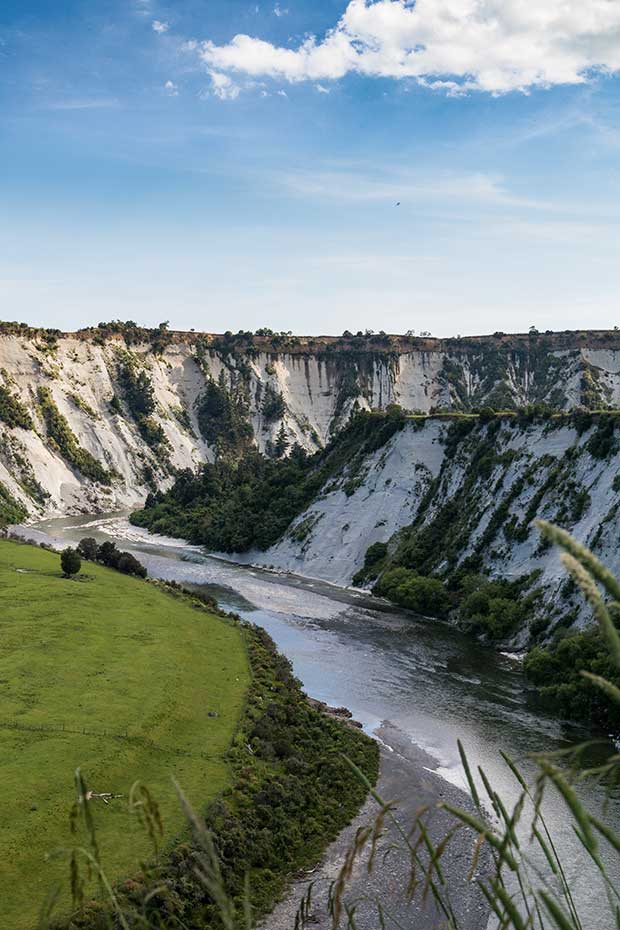 The upper reaches of the Rangitikei River run between vertical fern-clad cliffs which give way lower down to white mudstone (known as papa) – the outstanding feature of the river.

Southwards, just past the railway hamlet of Ohingaiti, the region’s golf course, Rangitira, set in picturesque countryside, has sweeping views of the river. An electric cable car, the only one in the country, connects the course’s three terraces. 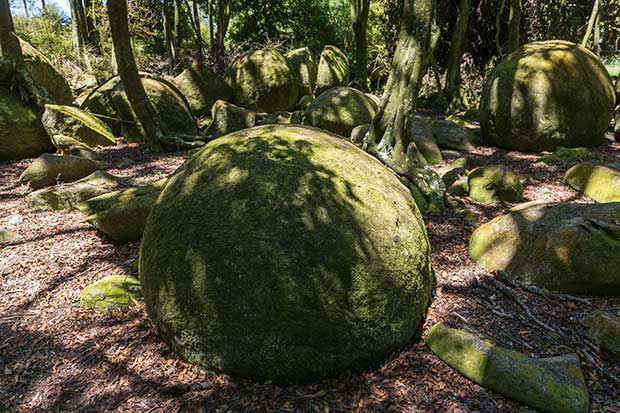 The Whitecliffs Boulders are a natural wonder said to be millions of years old. The moss-covered cylindrical boulders of mud stone are clustered in a native woodland, a magical, intriguing place. Although on private land, access is obtained for a small fee at the carpark off Otara Road, Ohingaiti.

Nearby, the Whitecliffs Boulders are a little-known natural phenomenon. They can be reached by walking in off Otara Road, a kilometre north of Ohingaiti, or taking a jet boat ride upstream.

This can be an exciting experience as some boats need as little as 10cm of water to operate; they skim over shallow stretches of gravel and duck alarmingly close to the cliffs. The boulders are a short stroll across a paddock – they’re an enthralling sight, evoking wonder at their ancient origins.

Countless cylindrical forms (some small, some gigantic) nestle among native trees. Some are split in half, some covered in moss and lichen, while others are grasped and enclosed by tree roots. Known as cannonball concretions, they are believed to be between two and three million years old. Nicola Megaw (right) manages the horse trekking part of the River Valley operation. “I’m so fortunate to be able to do this getting up very early to start the day,” she says. Her horse ‘Brave’, which she rides with no bits and no shoes, was rescued from the Kaimanawa mob that range the North Island hinterland. Autumn Lawlor rides ‘Te One,’ also a Kaimanawa horse. They guide parties on rides out over the farm, which international visitors love.

There are many private fishing cabins as well as commercial lodges along the river and further downstream the rugged land gives way to sheep and beef farming. 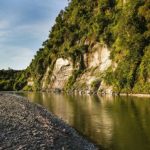 Mudstone cliffs can be unstable and slips do occur such as this one at a quiet pool near Mangaweka. 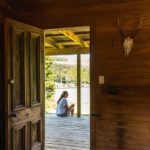 visitor Georgie Dalgety sits on the verandah of Derek and Margie Mickleson’s private fishing cabin south of Utiku. Built for a pioneering family, the cabin still has many old-time features. 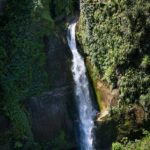 downstream many waterfalls cascade down papa cliffs clad in moss and fern. Some are comparatively gentle but others crash down from 300 metres and the water is ice cold. 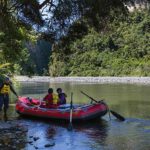 Rob Henry secures the raft on a placid riverbend and waits for his passengers to climb ashore – there is a rapid downstream and Rob thinks his older passengers are best to walk it.

More stories you might like:
From Frodo's chainmail to Kaynemaile architectural solar screens: How Kayne Horsham became Lord of the Rings

At Utiku, there is a cabin that was built 100 years ago by pioneers cutting the bush. This little building on the riverbank retains many of its original features – doors, windows and an unusual coved timber ceiling – that recall the long history of settlement.

Further south, Rathmoy Lodge, just north of the township of Hunterville, is one of three lodges on the middle section of the river and offers good pheasant shooting. 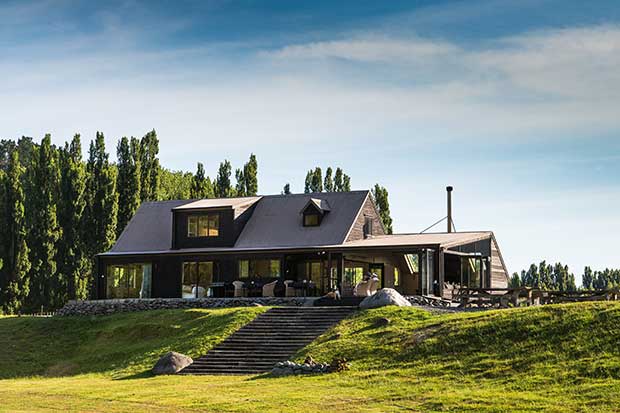 Rathmoy Lodge, alongside the river on a sheep and cattle farm, is owned by Mark and Andrea Grace. It offers accommodation, pheasant shooting and is a wedding venue.

It’s just opposite the Vinegar Hill Reserve, known among the gay community since the 1970s for its New Year festivities when a new ‘Queen of Vinegar Hill’ is crowned annually. With spectacular white cliffs, deep canyons and multitudes of cannonball concretions, the river appeals both to the thrill-seeking and more contemplative visitor. From source to mouth, it’s an adventure like few others. When a golf course spans three levels descending down to a river, as at Rangitira, just south of Ohingaiti, an electric cable car is the answer – it’s the only one of its kind in the country.

MORE THAN A DROP TO DRINK

The Rangitikei River has sustained settlement for a long time. 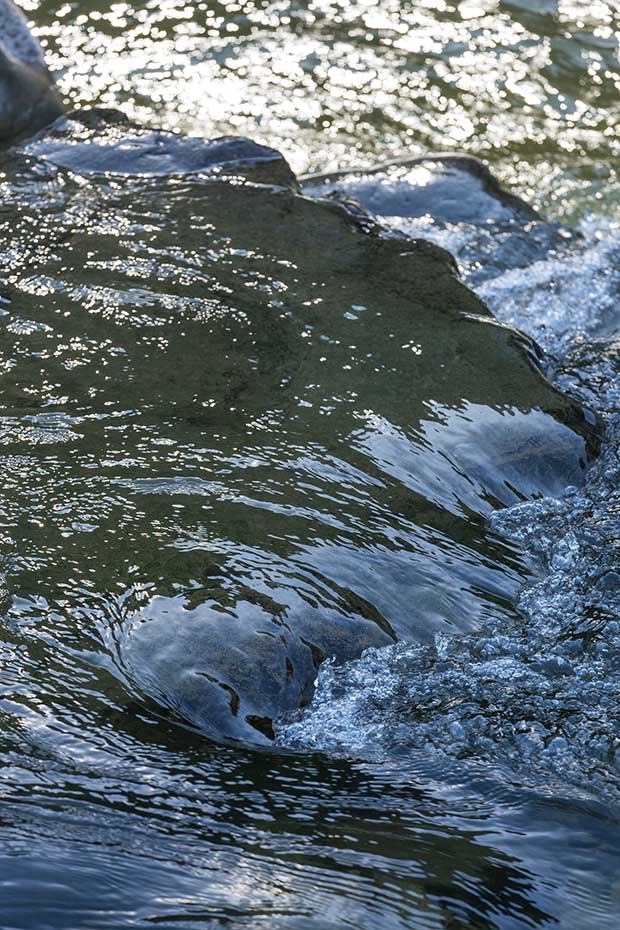 A privately organized irrigation supply near Hunterville, using river water, was completed in 1984. This scheme is now run by the Rangitikei Council and testing is done on a weekly basis.

Computerized and reliable, using pumps and gravity, it feeds approximately 12,000ha of the central Rangitikei area cheaply and efficiently. If you drink tea or coffee, or water straight from the tap, in this region on State Highway 1 you are drinking river water. Hunterville’s supply is treated. 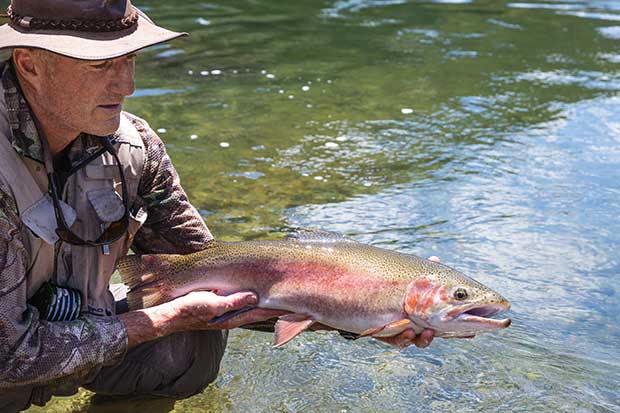 The upper reaches of the Rangitikei River are catch-and-release territory.

Throwing back a 3.2kg rainbow trout (or as fisher folk say, “it’s a seven pounder”), fishing guide John Gordon explains: “I’ve caught that one before.

For many people that would be the catch of a lifetime; there aren’t too many places you could walk a few steps and catch a trout. But that epitomizes this river.”

A PERSONAL GUIDE TO THE RANGITIKEI Mist settles into the chasm at River Valley.