Why action-packed Rotorua should be your next family holiday Checking out the canopy walk in the Redwoods forest from swing bridges suspended in the trees is a magical experience.

There are few places one can land a plane on a lake, creep through treetop canopies, dangle feet in geothermal waters and explore the pockmarked landscape left by an enormous explosion. Welcome to Rotorua.

I’ll admit my heart was pumping when she posed the question, “Are you a courageous man?” I was perched on the edge of a platform 22 metres in the air, wondering how far I’d go to prove my mettle to my two daredevil daughters standing alongside me. “Yeah, I reckon so.”

Dead-keen to demonstrate my nerve, I did as advised – spread my arms wide and dropped backwards. The adrenaline was spectacular as a zipline whirled me, at break-every-bone-in-my-body speed, through stands of ancient native forest. Canopy Tours is a 1.2km flying-fox adventure on the outskirts of Rotorua; measured by fear factor, it was, by a significant margin, the highlight of three crazy days my teenage daughters and I spent in the sulphur city.

With six ziplines and swing bridges, it was thrilling rather than scary, and with conservation lessons tossed in, educational too. The guided odyssey through the trees took three hours; even so, the girls wanted to press ‘repeat’ as soon as they’d finished.

Rotorua has many faces. It can be a sedate, touristy trip through geysers, mud baths and hot pools – and a beguiling introduction to Maori history. While we dipped our toes in that, my daughters needed a thrill to be entertained. Mountain biking in The Redwoods forest can ignite competition even between family members.

And I followed in their fearless footsteps.

So show me the plastic sled with a steering handle that doubles as the brake, and let me careen down the side of Mt Ngongotaha. My sister lives in Rotorua and when we visit, it’s ‘game on’ at the luge. There’s no better feeling for a man past his athletic prime than the joy of beating his kids, nephews and nieces down the track.

When you’re bunted sideways by an 11-year-old with a smile as wide as the mountain yelling, “See you at the bottom old man”, the competitive juices kick in.

At the mountain bike park in The Redwoods Whakarewarewa Forest, there are trails for all abilities but introducing the girls to the sport gave me the perfect excuse to opt for the beginners’ paths. Ride the rapids or hop in a kayak for a glowworm experience with River Rats.

Over on the city side of The Redwoods, giant wooden lanterns by designer David Trubridge hang in the branches above a series of swing bridges in a tree-top walkway.

In the daytime, this gentle adventure appealed to the girls – the oldest explored her passion for photography while the youngest delighted in making the bridges bounce. At night, with the lanterns aglow, the tree-scape turns into a magical wonderland.

The next morning, war broke out and I was the enemy. 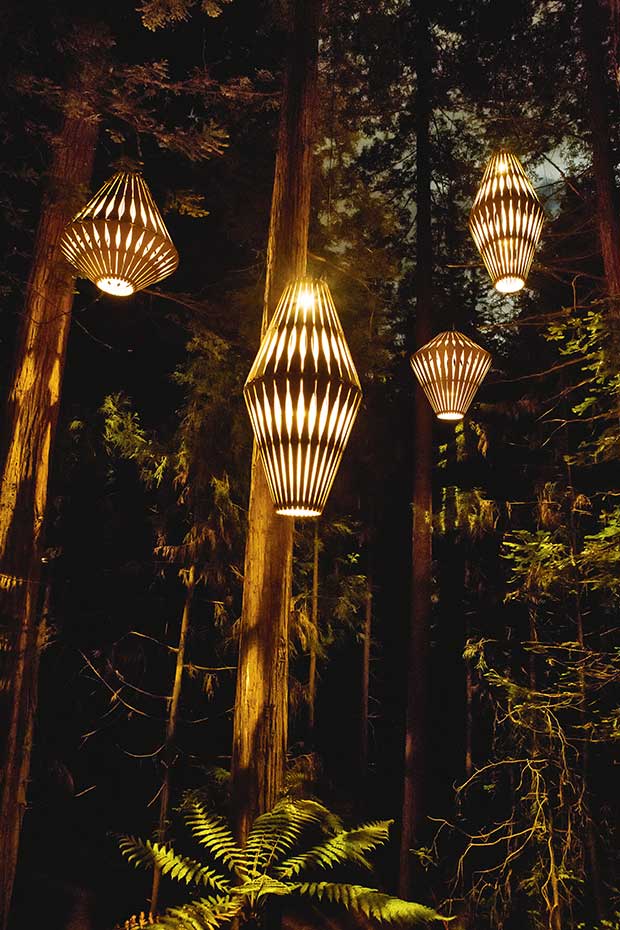 I received a glare from my eldest that would boil mud as I climbed on board a scenic flight – there was no room for them in the tiny aircraft, so I waved goodbye as the Volcanic Air seaplane disappeared into the drifting clouds above the lake.

George, a pilot with a wolfish grin, pointed the floatplane towards Orakei Korako on the banks of the Waikato, a secluded geothermal valley of bubbling mud, gurgling geysers and silica terraces. 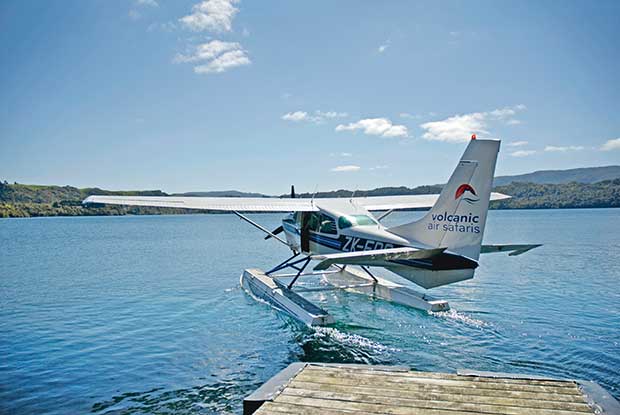 Afterwards, a relaxing soak and massage at the Polynesian Spa was way too short (for me anyway) and it wasn’t long before this all-action family were piling into the ute for a trip to the River Rats base.

Instead of white water rafting, we went kayaking. Or at least, most of us did. My youngest, who paddled tandem with our guide Justin, used it as an opportunity to hold forth with teenage tales as we made our way to the Manupirua hot springs on the other side of Lake Rotoiti.

Even though my kayak was too short (a fact I stoically didn’t mention), I won the race over the last stretch – but only just. The eldest was plotting a rematch. 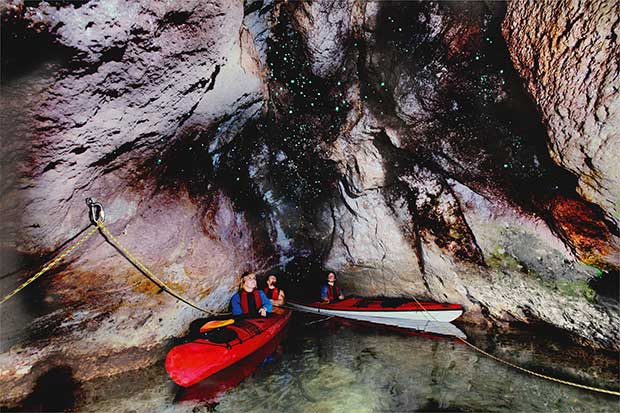 Dunking your body into three small pools, each at a different temperature but all too hot to endure for long, then cooling off in the lake, really works up an appetite.

Justin cooked a classic Kiwi barbecue dinner of bangers, steak and salads, followed by cheesecake and then it was time to paddle off to see the glowworms.

No sitting and staring in silent awe here: to the delight of the girls Justin advised as much noise as possible inside the cave since glowworms respond to vibrations.

I left them to explore while I sat in my kayak out on the lake, watching the water become ripple free as night slowly took hold. Kids are a brutally honest barometer. And so it was when we arrived at Hells Gate. “Is this another steam park?” the youngest asked, rolling her eyes.

There’s no escaping Rotorua’s unique geothermal character, but you can overdose on it. To my surprise, their enthusiasm returned. After we wandered through the hot, steamy park, they plunged into the therapeutic mud pool with glee.

The eldest happily smeared grey sludge all over her face and I knew it was only a matter of time until they turned their muddy attention to me. They got their sweet revenge at last. Looking back, I hadn’t been a complete weakling.

On the final high platform at Canopy Tours, I received our guide’s firm instruction with bemusement: I had to do the last zipline hanging upside down. So I did. Throwing myself off the edge, I stared down at the punga as I flew across the valley, legs flailing skywards like Santa wedged in a chimney.

Fire: The Waimangu Volcanic Valley, the youngest geothermal area in the world, is the burial ground of the famous pink and white terraces, and a geothermal wonderland. Take a lake cruise and imagine what lies beneath, or wander one of the many trails through the scenic bush.

Earth: Soak in the elements (literally) at the Polynesian Spa. A Rotorua ritual for over 130 years, one must stop in to pay their respects to the geothermal gods by relaxing in one of the 26 pools fed by two mineral rich springs.

Water: For a spot of pure indulgence, board Tiua, a 53-foot French built catamaran that now calls Lake Rotoiti home. What better way to see the lake than on a waterview beanbag, wine in hand and cheese platter on deck? Charter by the hour, or choose one of the cruise options.

Air: Unsure about the pungent aroma that drifts through the region like a unique perfume? Rise above it by climbing to new heights with Canopy Tours, or taking to the sky in a seaplane.

From Auckland, there are two routes that are, pretty much, the same in terms of travel time. We went via SH1 and stopped for coffee in Tirau. On the way home, we went through Matamata and stopped there for a break. Either way it’s about three hours from Auckland.

Sudima Hotel is a comfortable travelers’ hotel. No frills, but we didn’t care as we were hardly there. Good breakfast and, importantly, first-class coffee!

Terrace Kitchen is superb and  a stone’s throw from Eat Street which caters to almost every taste. Pop into Lady Jane’s Ice Cream Parlour – an iconic parlour with 40 flavours on offer. Lime Café does great coffee, whilst Fat Dog  Café & Bar is a good place for breakfast.