A sweet life in Greytown: The couple behind Mela Juice share the science of blending apples for their newest cider brand 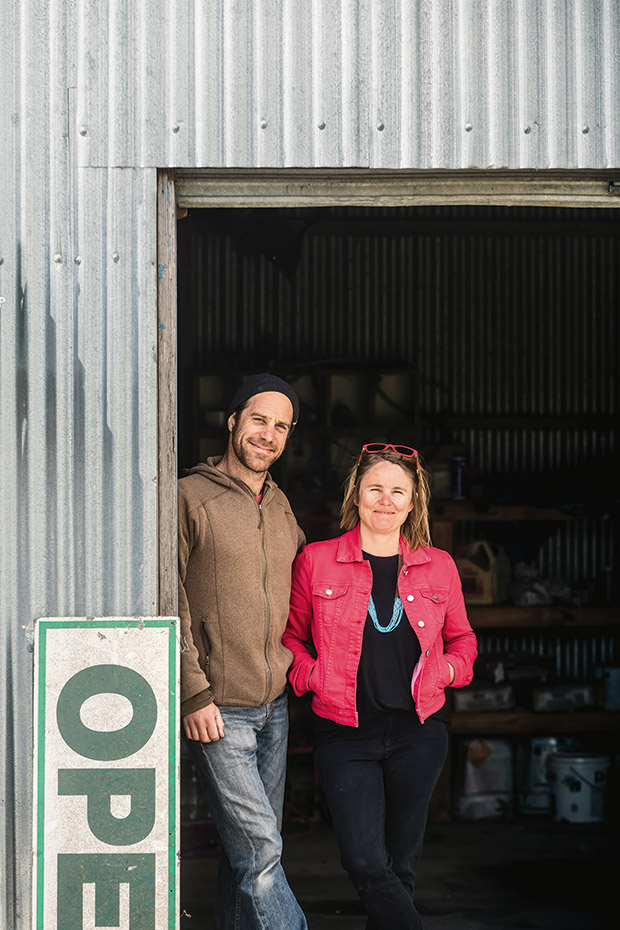 Brian Belluomini and Sarah Wright in the doorway of their press, where Mela juices and Forecast Cider are produced.

Mela has been keeping New Zealanders sweet since 2004. Now a second generation of makers is forecasting great things for the Wairarapa brand’s cider and single-variety apple juices.

It’s a little bit funny and entirely appropriate when food producers geek out about their products. Ask Sarah Wright and Brian Belluomini from Mela about their cider, and they extol the virtues of various apples and yeasts.

Who knew there were so many varieties of cider apples (hundreds)? And how many strains of yeast? Thousands, probably…

“With our apple cider, I like to do a yeast mix-up. You’re not supposed to do that, but I do. I have a few things going on in there — wine yeasts, mostly. Yeast is a whole other animal in its own right. I’m just trying stuff. I’m not super-nerdy about it,” says Brian, sounding for all the world like he is. Sarah and son Nathan in one of their supplier’s orchards. Forecast Cider was named so Sarah and Brian could “have fun” with quirky weather names, for example, ‘Fine about the Ranges’ and ‘Gusty in Exposed Places’.

“For our Forecast Fine About the Ranges cider, we usually use sweet coppin, kingston black, and mettais varieties to give us that blend.” (Other apples sometimes used include yarlington mill, slack-ma-girdle, russet and stoke red.)

It’s the mélange they arrived at after much experimentation with cider-apple varieties, including testing random donated fruit. “We had lots of people giving us crazy apple varieties they’d harvested from the side of the road, got from friends or from jumping over fences,” says Brian.

“I was hanging out with a local cider-maker, picking his brain and experimenting with small batches. People were enjoying it, so a 20-litre batch turned into a slightly larger batch, and then we decided to jump into cider on a boutique commercial scale.” Thus, Forecast Cider entered the market in 2015, made in a 2500-litre tank not being used for Mela apple juice, Sarah and Brian’s main libation line. “We make cider the traditional, bottle-fermented way, and we had all the bits we needed to make it. It was a no-brainer,” says Brian.

The Mela brand — mela means “apple” in Italian — has been around since 2004, when Sarah’s dad, Andrew Wright (one of the founders of Lighthouse Gin, who featured in NZ Life & Leisure in September/October 2010) started pressing and bottling juice in Carterton, and making apple cider vinegar. As an example of high irony or unfortunate timing, Andrew decided to start juicing apples not long after he’d pulled his own orchards out.

“The bottom had fallen out of the apple market hard, and orchards weren’t making any money,” says Sarah. The artwork on the Mela bottles was inspired by the popular children’s book, The Very Hungry Caterpillar. “We wanted something that was approachable to families and kids, as that’s our target market,” says Brian.

In 2011, Sarah moved back from San Francisco, after working at Dolby, bringing her American musician and “jack of all trades” husband, and young son Nathan. Nathan, now nine years old, has since been joined by his younger brother, Desmond – “Diz” to his family – who’s eight.

“Staying in Carterton wasn’t exactly the plan. But it was summer, and the place grew on us,” says Brian.

Brian started working at Mela with Andrew, and Sarah joined a few years later after having Desmond. Andrew has since stepped away from the business, leaving Sarah and Brian in charge. Since then, they’ve started making cider, moved their smaller “café” bottles of apple juice from plastic to glass, and launched a rebrand of much of their 100 per cent single-variety apple juices.

As different apple varieties come on at different times, Mela’s juices were generally single variety anyway, but that wasn’t made clear on the labeling. Thus, sometimes the juice would be sweet and sometimes sour, causing consumer confusion. “Some people really like sour drinks, while some like them sweet. To appeal to wider tastes, we decided to make our single presses a point of difference. People love our Granny Smith Apple Juice. It’s one of our best-sellers,” says Brian.

Mela single-press juices are now available in four varieties — braeburn, pacific rose, royal gala and granny smith — with three blends including orange, pear, and blackcurrant.
The company currently presses 120,000 litres of juice a year, with a top capacity of 6000 litres a week. 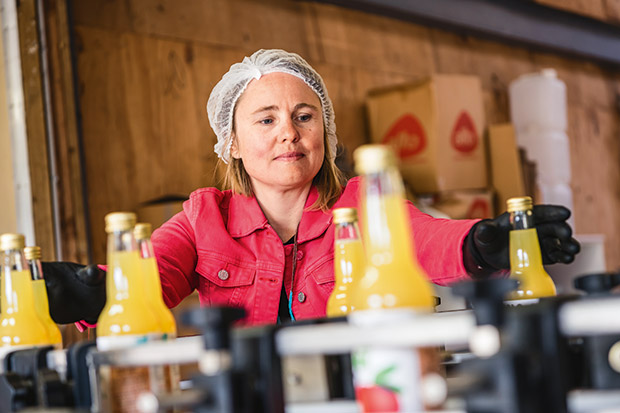 The decision to highlight the single presses necessitated a refresh of the Mela brand, which, Sarah says, was getting a bit lost on shop shelves. “Other juice producers had stepped it up a notch during that time, so we had to, too.”

That led the pair into a whole new experience in branding and marketing, and they happily credit their Masterton-based designer for making the process “less painful” than it could have been. There was still pain, however, involving a soft launch at the 2015 Toast Marlborough festival. “The labels showed up at the 11th hour, incorrectly printed. There was some drama, but we got through,” says Brian. Sarah and Brian would love to offer all their juices in glass bottles, but about 70 per cent are still sold in larger PET plastic bottles. However, the pair make sustainability efforts in other ways, sourcing as many apples as possible from Greytown (the rest from Hawke’s Bay), buying their bottles from New Zealand, and having their apple pulp go to a local farmer to feed to cows and fertilize fields. They also recycle as much as possible.

“We have one standard-sized skip outside, and it only gets removed twice a year,” says Brian.

It was such practices that won them mentoring through the Wellington Good Food Boost, run by the Sustainable Business network. “That’s been great,” says Sarah.

“We wanted to know what the next step is, given that our main limitation is apple supply. Do we develop a new juice? Or do we go crazy on the contract bottling, which would mean buying more equipment?” The contract bottling is a useful fill-in for them when apples aren’t available. Currently contracts include a juice made from noni, a Polynesian fruit that’s fermented, pressed and is popular as a health drink in Asia. They’re keen to grow the contract bottling side of their business, even if the runs are small.

“We think we’re the only bottler in the North Island that will do small runs,” says Brian. “If someone is experimenting, trying to bring a product to market, even if they show up with 100 litres, we’ll bottle it. That side of getting into the beverage market is a challenge, and we like helping other businesses get off the ground.”

As for themselves, challenges they’ve had a few, but they can laugh now.

“With our cider, we haven’t had a batch turn to vinegar, or a tank blow up — even a single bottle. But we did have a batch where the lids weren’t tight enough, meaning
we had to hand-tighten 7000 cider bottles,” says Brian. 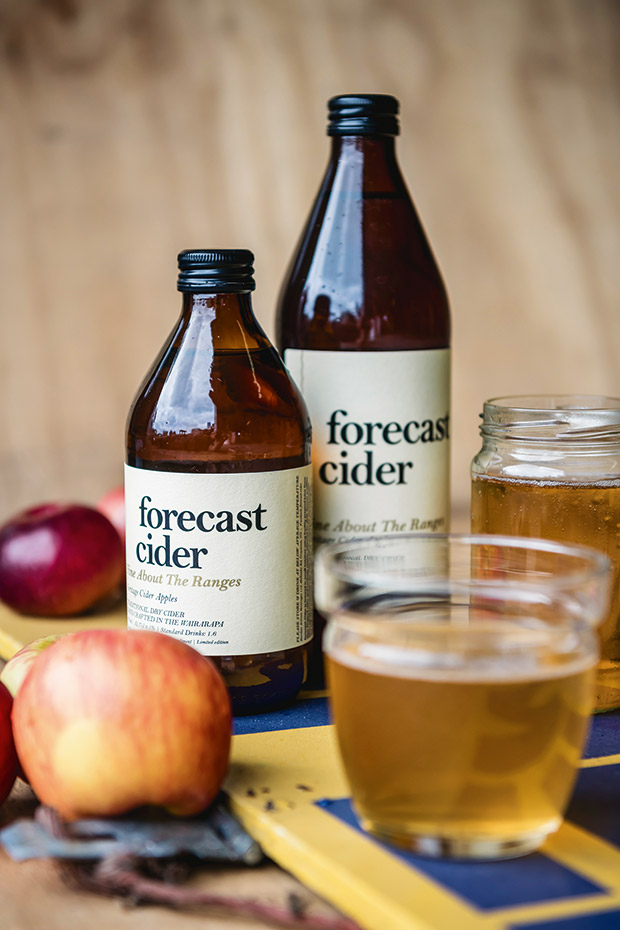 Sarah groans. “Not to mention the labels that had the previous year’s alcohol value on them, which was different. We had to go through the entire batch and write in the new value with a pen,” she says.

Add in days that require being out in the cold and wet, and the juice business doesn’t always look so sweet. “But when we are outside on lovely days, it’s really nice,” says Sarah.

“It’s also nice when people tell you Mela is the only juice they let their family drink.” mela.co.nz

THIS SUMMER, WE’LL BE…

Listening to: Demand for the Spotify controls is high in this household, with everyone having their own definite tastes. The Black Pumas are on high rotate, with Brian (who’s in a band called Coral and the Refers) listening to Tyler Childers, Danny Brown, and the Car Seat Headrests. Sarah likes Steve Gunn, Purple Mountain and Stevie Wonder, while Nathan (who plays guitar in his own band) and Desmond like ACDC, the Fearless Flyers and the White Stripes.

Eating: “Assuming we’re away camping beside a beach, I’d like to say fresh fish,” says Brian. “But my luck with catching fish isn’t great…” “And assuming Brian can catch fish, I’d like to say homemade sushi because I’m into healthy Japanese home cooking, which I’ve been learning from a Japanese friend. So, no, probably no sushi…” says Sarah.

Drinking: “I’m pretty flexible on that one,” says Brian. “Horchata, a Mexican rice cinnamon drink, is a nice summer beverage . You blend up rice with a few cinnamon sticks, leave it with water overnight, then add sugar, and pour it over ice with some milk.” “You could make it vegan, by using almond milk, or alcoholic by adding tequila or vodka — a cinnamon white russian,” says Sarah, who will also be drinking switchel (see page 132).

Playing: “We like to play Farkle, which is a dice game derivative of a drinking game, but we play it with the kids,” says Brian. “I generally avoid games with the kids if I can, but I’ll play Farkle,” says Sarah.