If it weren’t for chocolate and coffee, Angela Clifford and her family would be mostly self-sufficient food-wise from their bountiful organic block.

One step out their front door and you enter the heart of The Food Farm’s huge permaculture garden, bursting with annual and perennial vegetables, fruit, and flowers.

“Part of permaculture is that the places you need to visit most often are closest to your house,” says Angela Clifford, who created the garden from nothing with her husband Nick Gill. “That garden is 400m² and then we’ve got bigger veggie beds out the back door, probably another 800m².”

November is a busy time on this block. Angela and Nick must hold their nerve through September and October, resisting the strong temptation to plant out the hundreds of vegetable seedlings they’ve been carefully tending in their greenhouse. 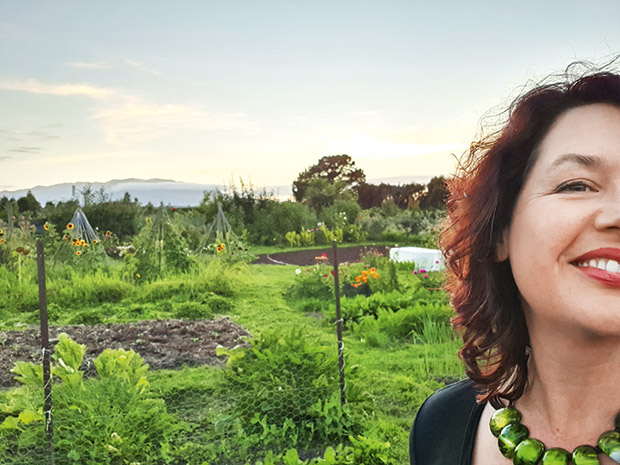 Angela Clifford at The Food Farm in Amberley.

“We get spring frosts – really late spring frosts – so you learn not to plant until you can have success. Plant too early and you have a higher chance of an adverse weather event.”

Strangely, despite planting in mid-November, they still harvest close to the same time as gardeners in warm climates who get to plant out weeks earlier. “We’ve noticed the plants catch up anyway, so a lot of our activity in spring is about getting garden beds ready.” The family uses a purpose-built hut inspired by pātaka kai (storehouse, pantry) to store maize, potatoes, and pumpkins over winter. It’s protected from the southerly rain by shelter trees, which also keep it cool. The slats allow airflow from the north and east.

This year, after 17 years of successfully feeding their family, occasionally supplying the local farmers’ market, and running a subscription box servicing their community for a time, they’re making a significant management change to the garden.

“We’re going fully no-dig now, and we’re lifting our beds up a little bit,” says Angela. “Not raised beds in the sense of wooden planks around them but having the soil sitting higher because we’ve noticed that they’re just too low and getting flooded.”

That’s a curious problem to have on an essentially flat piece of land, where they often spend summertime in drought. “Yes, we thought drought would be the biggest issue when we moved here and it has been, but as the climate changes, we have times when we get a lot more rain in one event, so the solution is raising the beds higher.”

That means a layer of mulch with compost on top – their own and bought-in mushroom compost, as it’s such a big job.

“They’re about 100-150mm above ground level now. Too high and we’d spend all summer trying to keep them watered, and we’re not fans of wooden-edged beds because they’re much harder to work and you end up with pests living in the edges.”

FROM VALLEY TO VALLEY

NZ-born Angela met Australian Nick Gill while working in the wine industry in the Barossa Valley, north of Adelaide. The couple dug up the lawn of their rentals to grow food, then created a huge vegetable garden around their first house.

They did a course at The Food Forest with one of permaculture’s legendary co-creators, David Holmgren, and it was that philosophy that brought them to the Waipara Valley. 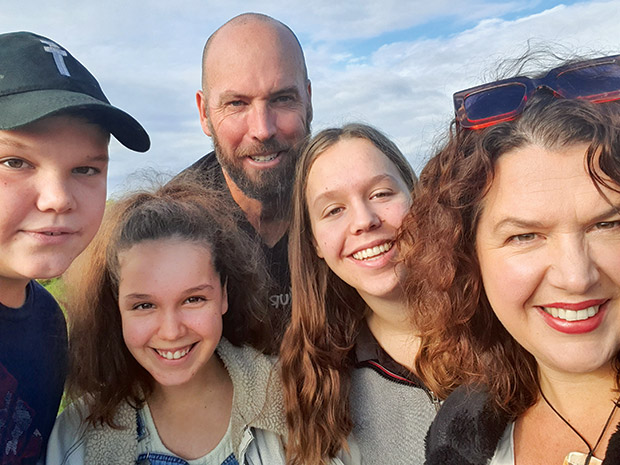 “It gave us an understanding of key things like water and soil. When we put South Australia up against New Zealand 17 years ago, even then climate modelling was showing New Zealand was streets ahead.”

They bought a block that was completely bare save for one old pine tree. The first thing they did was build a house designed around permaculture principles.

“There was so much beyond our budget at that stage, but we did things like passive solar design, the widths of the soffits (to maximise sun in winter, and shade in summer), the position of the house, a concrete floor to create thermal mass. We’ve got a grapevine that sits along the west side of the house that creates a shelter over a terrace. It lets in the sun in winter and creates an incredibly cool green room that protects the temperature in the rest of the house in summer.”

They also used their permaculture eye to look at their block and decide what to plant. “What (permaculture) teaches you is to look and ask what are the weak points of this property? Here, it’s quite clearly the infamous North Canterbury nor-wester. It’s this amazing wind that hits the Southern Alps, drops all the rain on the West Coast side, then barrels down over us as this hot, foehn wind.” “Borlotti bean season! I love these bejewelled treasures,” says Angela. “Each pod is like opening a present.”

The couple spent every last cent and called in every favour from friends and family to plant a selection of shelter trees. Veronese poplar (Populus euramericana) were underplanted with natives on the north-western side. A mix of eucalyptus varieties borders the southern boundary, a nod to Nick’s homeland. To the west are more eucalyptus, and one of Angela’s favourite trees.

“Tagasaste, or tree lucerne (Chamaecytisus proliferus var palmensis), it’s an awesome tree. They’re a bit susceptible to frost in the first year, but if you can get them past that, then they’re away and they’re great. We have bees and it’s a massively important tree for us because it’s flowering in late winter when literally nothing else on the property is
– it hums with bees from our hives.”

Meet the four sisters of the Chaos Garden. That’s the nickname of the Food Farm’s polyculture paddock, where a tangled mix of plants creates a mutually beneficial, close-to-natural ecosystem. • the maize is a climbing frame for the beans;
• the beans fix nitrogen in the soil;
• the pumpkins shade out weeds and help prevent soil from drying out;
• the sunflowers help support the beans, attract pollinators, and distract birds.

It was an interesting experiment, says Angela, but even more fascinating were the ‘volunteer plants’ that joined in the chaos.

“We had tomatoes, we had epazote (Dysphania ambrosioides) popping up, which is a Mexican herb. Now, we have a tiny amount of epazote on the property. But it’s miles away (from this spot), yet it found its way into the system that it naturally belonged in. If you look at Mexican cuisine, you find there’s a huge amount of recipes that have maize, pumpkins, tomatoes, and epazote in them. “It was a real lesson for us about creating the right ecosystem and diversity, and I think we’ll be doing more of that because diverse systems are incredibly resilient.”

WHY ANIMALS ARE JUST AS IMPORTANT AS PLANTS

One of the most important principles in permaculture is that everything should have more than one ‘job’. That includes their Wiltshire sheep, cattle, pigs, laying hens, meat chickens, and beehives.

More stories you might like:
How to grow flowers all year: Blueskin Nurseries' Sally Brown shares her secrets to a year-round cutting garden “Animals are a massively important part of our system. I know it’s possible to run a permaculture system without them, but it would be so much harder.

“By far the most useful are our milking cows because they convert grass to protein (milk) – almost everything else has to be fed protein to create protein. So we take their milk and feed it to our sows and also to other animals. We use their manure a lot, particularly in biodynamic preparations and compost. They’re incredibly valuable animals in terms of soil growing and feeding us.”

The animals are strategically placed around the block. Cacao lives close to the milking shed. There are large enclosures nearby for the egg hens and meat birds. 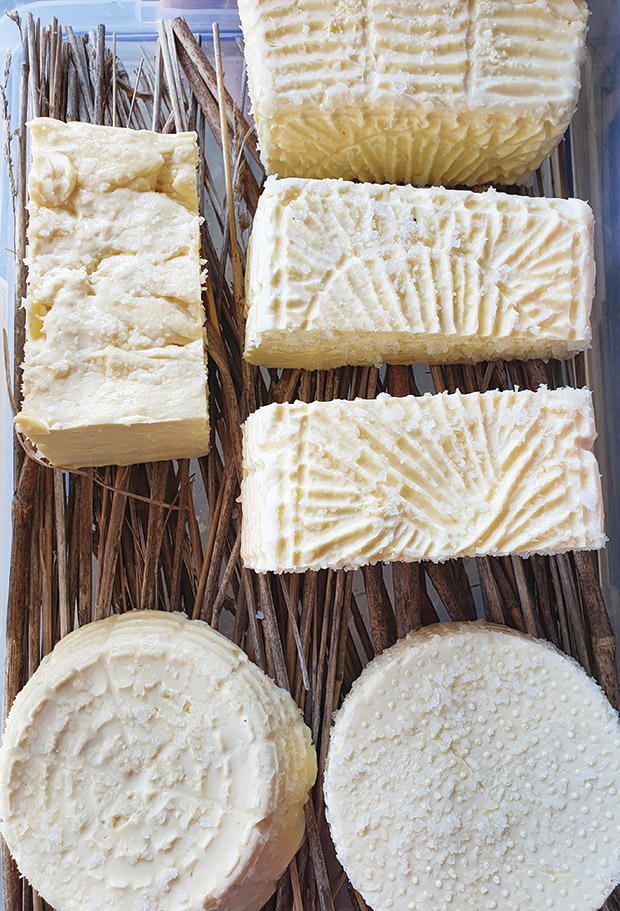 One of Angela’s favourite times of day is when she milks her Jersey house cow, Cacao. She milks in the afternoon, taking a bucket a day, and processes it into cheese, butter, yoghurt, and crème fraiche. “There’s huge variability (in flavours) depending on the weather and what Cacao has been eating, but it’s all delicious and a true reflection of the takiwā or terroir of The Food Farm.”

The ducks live by a pond, while another is fenced off to allow other birds and wildlife to live in peace. The pigs are on lighter, warmer ground at the back of the farm.

The couple breeds a Hampshire boar (good for its big butt for ham) with a Wessex saddleback sow, renowned for its long loin. The pigs get all the excess from the gardens and orchard, which adds to the final flavour. All the animals are eaten at some point, apart from surplus weaner piglets which they sell to other block owners. “We do all the processing – there isn’t an animal that goes off this farm in a truck. That’s a really important part of our philosophy. We want to be able raise our own meat and process it ourselves.”

Each winter, the couple hosts ‘pig weekend’, processing their homekill meat using charcutier techniques from all over the world. “We also process some summer pigs too, and they’re turned into more standard cuts, mince, hams, that kind of thing.”

Something kept nibbling on the maize crop, and Angela finally found the culprit. He’s one of the ducks that wander the farm doing (mostly) important work. “They’re epic slug and snail finders. Over winter and spring, they free range and it’s amazing to watch them first thing in the morning. They come running into the garden like little hoovers.”

Angela says she prefers Pekins as they don’t fly, are very laid back, and have nice meat, although theirs are a bit of a pick-n-mix.

“Over the years, other breeds have been bred into them, so it’s an interesting colour mix now. We had a couple of wild mallards that came in a few years ago, so you can see some are a mallard combo, and we have some Orpingtons, a light brown duck.”

6 THINGS TO KNOW ABOUT A POLYCULTURE GARDEN

• also known as intercropping;
• crops which when planted together improve yields due to complementary use of resources;
• lower fertiliser requirement;
• greater resistance to insect pests;
• better for soil quality compared to a monoculture (single crop);
• always something to harvest if one crop in the mix fails.