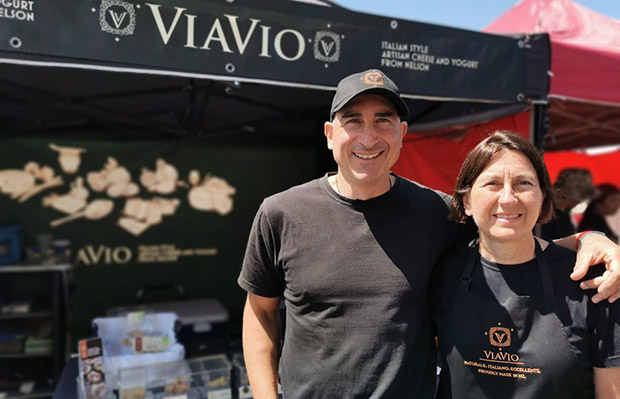 An Italian couple recreates favourite cheeses from home. Their creamy mascarpone, a favourite at the 2021 Outstanding NZ Food Producer Awards, named them the winner of the Dairy category.

Love tiramisu but can’t find the high-quality key ingredient needed to make it? That was the starting point for the latest-award winning product from Nelson-based cheesemaker, ViaVio. (The name of the small artisanal company combines the last three letters of the owners’ first names, Flavia Spena and Flavio Donati.)

Their mascarpone, which impressed the judges with its creamy texture and rich buttery flavour, is made traditionally by pouring cream into a cheesecloth-lined colander and leaving it to strain slowly for a day while chilling. One judge described it as “outstanding”. ViaVio uses pasteurized cream for the mascarpone, but most of its cheeses are from locally sourced A2 milk (except for the pecorino, made from sheep’s milk). They use natural Italian cultures and add no preservatives, colours or sugar.

A decade ago, life was vastly different for the couple. Based in Rome, Flavia worked as the CFO for Bulgari, the luxury Italian brand. Flavio played rugby for the Italian national team, and during the off-season, he would play in New Zealand. They loved Aotearoa and decided to settle here. In their busy professional lives, they saw little of each other; now, they spend most of their time together. (ViaVio also won gold medals at this year’s awards for its pecorino cheese and A2 natural yoghurt.)