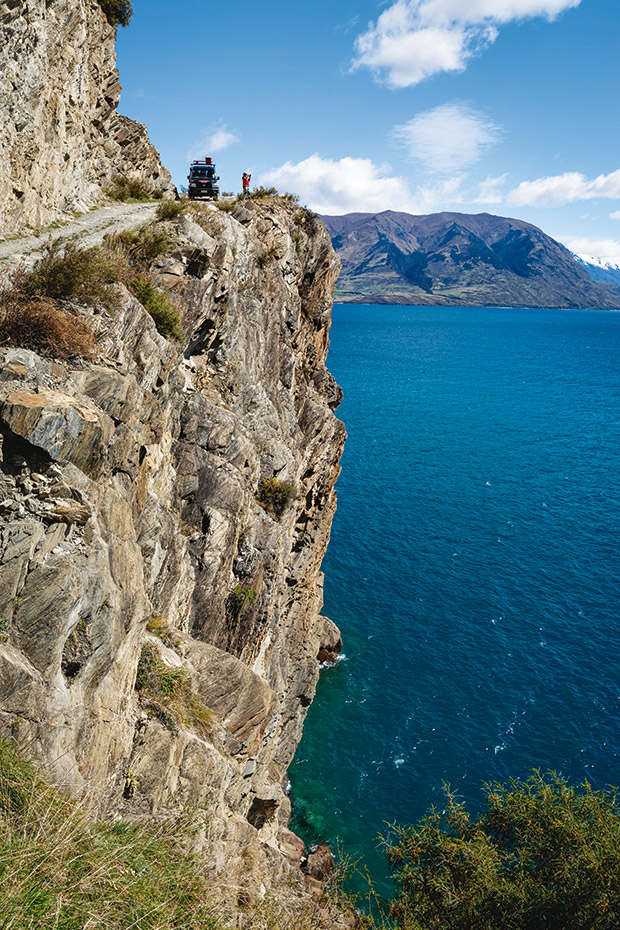 Rats, stoats, kea — and vistas few get to see — Mark Orbell takes visitors to his favourite part of the country, showing off Wānaka’s wildlife, including some he hopes to find neither alive nor kicking.

Peering through the driver’s window, Mark Orbell squints towards a rectangular wooden trap, lying a couple of metres from a rutted farm track. “Oh, there’s something in there. It looks good.”

He throws the truck into park, pulls on the handbrake, jumps out, grabs a small plastic box and walks to the trap. Halfway there, he stops, interrupted by the call of an unseen kea. Maybe even two kea — it’s hard to tell.

“Ha, what timing. I haven’t heard kea here for several years, and they used to be everywhere. Kea are rare, but people don’t realize as they see them begging around huts. Finding kea here now is a direct result of the trapping programme we’re part of.” He kneels beside the wooden rectangular box, gets a screwdriver from the plastic box and starts removing screws.

He slides the lid, revealing the catch. “Two stoats. Two!” He’s delighted. With effort, he eases each trap from the carcasses and, using a gloved hand, gingerly lifts out a couple of stoats. Their bodies are ridged from the weight of the trap as if they’ve been pressed against a griddle. 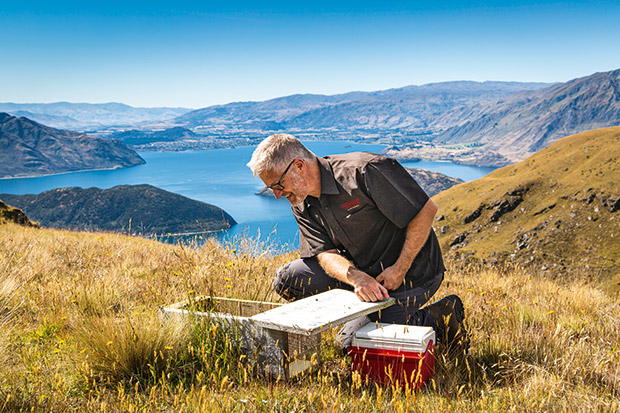 Marks Ridgeline Adventures has exclusive access to West Wānaka Station, where he or one of his drivers check and rebait 32 stoat traps as they navigate the backblocks of one of the oldest stations in the area. Mark calls this trap his “penthouse trap”, as it’s at the high point of his tour with the lake’s best views, looking towards the Upper Clutha Valley.

Having tossed the corpses into a copse of spikey matagouri — “all the better to attract more pests” — and recorded his catch in a notebook, Mark jumps back in the truck. “Right, let’s go. I’ve reserved a window seat in the best café in the world.”

And we’re off again on a rock-and-roll ride up the steep, narrow farm track on West Wānaka Station, cutting through matagouri bushes a few hundred years old, skirting red deer does whose fawns blend into the sheltering bracken.

Dealing with animals, dead or alive, isn’t Mark’s job. It’s not even the main reason he’s here, although conservation is his kaupapa. He’s lived in Wānaka for the past two decades and has been showing visitors lesser-known landscapes in the area for the past 10 years, proving there’s far more to the area’s sights than Roy’s Peak and the Wānaka tree.

Mark’s been a guide all his adult life. He studied tourism, then spent six summers guiding on the Routeburn Track, after which he took bus, hiking and camping tours. Mark loved “sharing stuff” with visitors, so he set up his own business, Ridgeline Adventures. 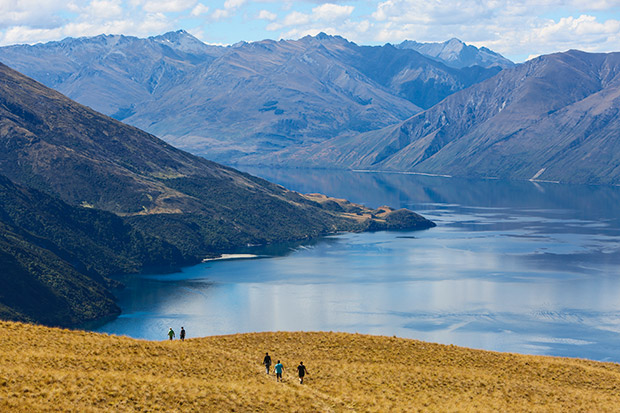 After international travel ceased with Covid-19, Ridgeline Adventures rejigged its safaris, offering supported walks, so hike-happy Kiwis can get out and enjoy the landscape up close.

For eight of these years, he has offered a 4WD safari to West Wānaka Station, established back in the 1850s. At the entrance to the Mātukituki Valley, between Lake Wānaka and Mount Aspiring National Park, its slopes are what skiers see when they look across the river when navigating the precipitous road leading to and from Treble Cone’s skifield.

“We’re super privileged to be the only company out here on West Wānaka Station. When you see the views, you appreciate what that means.”

Indeed, the vista from Mark’s “best café in the world” is a stunner. At the crest of a grassy rise, and just before an unnerving drop, he kills the engine and jumps out to check his “penthouse trap”. It’s empty, but the view from it is so full as to be overwhelming.

It’s the ultimate reverse shot of Wānaka, looking south-east over Mou Tapu and Ruby Island and the jetboat-streaked lake waters to the town and down the Upper Clutha Valley. Then, up the lake, there’s Mou Waho, with its bird sanctuary and own small island lake. Mark checks and rebaits the traps as he guides and says he’s thankful to the Longview Environmental Trust and the Wānaka Rotary Club for helping out with traps and bait.

“How lucky are we to be among the handful of people who can see this?” he asks, having set up the “café”, with fresh coffee and fruit cake, on the Land Cruiser’s cooling bonnet. “You know, 90 per cent of local people have never seen this. They might look up here from their houses and think they don’t need come up here, but when I do get some here, they’re like, ‘Whoa, this is epic. Why haven’t I been earlier?’”

Until now, the vast majority of Mark’s clients have been international tourists. But when the borders closed thanks to Covid-19, the brakes went on Ridgeline’s safaris. “We were going into winter anyway, so we had breathing space to think about how we could survive,” says Mark. “I realized it’s not about what we had, it’s about what we have, and we still have this amazing country.”

More stories you might like:
Far North Queensland: A roadtrip from Cairns to the tropical marvels of Daintree Rainforest

With lockdown lifted, like multitudes of other businesses, Mark has been revamping his company’s offering — as well as “mowing lawns, fixing irrigation and maybe doing a farm trip every few days”. He aims to attract New Zealanders who feel they have a country connection, so wouldn’t gain much from a 4WD trip into the backblocks.

Mark’s confident they would. “Kiwis like walking, and we have these amazing tracks. So, now we’re taking people hiking up here and supporting them with our vehicle. We can have lunch all sorted when they get to the top. And people who couldn’t make the walk can still experience all this. Mātukituki Charitable Trust volunteer takes in the view of the West Mātukituki Valley from the Cascade Saddle after clearing a trapline. The trust now has a new trapline across the saddle connecting to a Dart Valley trapping programme.

“How often do we get the chance to come to a place like this and listen to the silence, sense the solitude? Here, we can hear all the insects and birds. We can hear water running in a creek a kilometre away. It’s as much about what you hear as what you see. And what you won’t see is other people.”

That’s a point. The drive to West Wānaka Station passes Roy’s Peak — a must-walk to feed one’s social media. Even with the borders shut, the car park is overflowing, and an ant-like column of walkers plod skywards to queue for their photograph on the 1500-metre peak. Sure, there’s a view, but no silence and certainly no solitude.

There’s also no feel-good factor. “If we weren’t bringing out clients, we wouldn’t be trapping,” says Mark, because, as he and his guides convey visitors up and over West Wānaka Station, they check and rebait the 32 traps they manage as part of a network of 2000 traps around the Mātukituki Valley.

“We collected 14 stoats last year, which isn’t a lot, so we’re either missing heaps or stoat numbers are going down,” says Mark, hoping the kea calls indicate the latter. 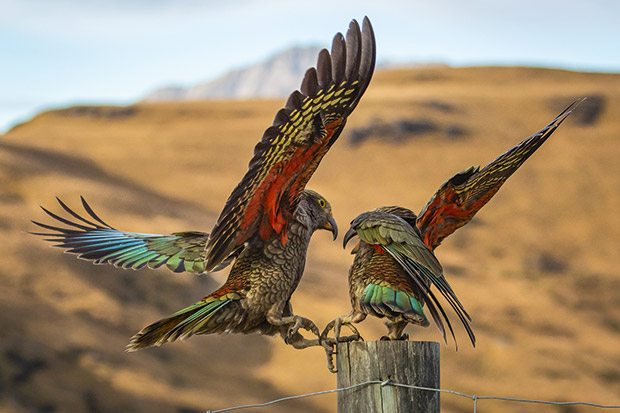 “West Wānaka Station is right at the entrance to the Mātukituki, so I like to think of the work we do as the first line of defence, stopping stoats, rats and cats moving further into the valley.

“Checking traps as we bring through visitors gives us a chance to talk about the threat to our native birds and the need to protect them.

“Some people are a bit squeamish, but when we explain we do this so they can walk through the Mātukituki Valley and have birds picking at the bugs around their toes or hear the kea flying over, it makes sense.”

Even before he started trapping, Mark put aside a portion of Ridgeline’s takings to buy native trees from Te Kākano Aotearoa Trust, a community-based native plant nursery. He and volunteers plant each year at the Mount Aspiring viewpoint by Glendhu Bay, and nine years on from the first plantings, the natives are taking over from the lakeside poplars and willows.

For Mark, none of this is greenwashing. It’s who he is, as someone who’s always loved the outdoors and whose last name sparks recognition in conservation circles. “Geoffrey Orbell rediscovered the takahē. He’s my grandfather’s cousin, and I got to spend some time with him when I was younger. He was definitely a man of the hills.” 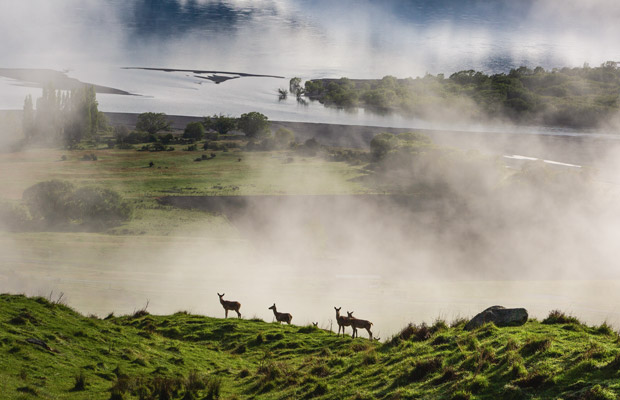 Mark jokes that the “big three” on his safaris are cows, sheep and deer — like the red deer here — but finding a dead stoat in one of his traps is undoubtedly one of the most anticipated animal sightings.

While Mark was a Routeburn Track guide, he took Geoffrey back into the Routeburn, to where he used to mine for pounamu in the 1940s. “He was in his mid-80s so couldn’t walk far, but he could still make out the trail he had bulldozed through the trees to get the pounamu out. It was such a great time.

“He talked a lot about what’s now called Takahē Valley, about things he found there. I was lucky enough to go into the valley when DOC ran a summer programme there years ago, but I didn’t see takahē.”

Visitors won’t see takahē on Mark’s safaris either, but they will see country that few can enjoy — without having to share an Instagram shot and while enjoying fruit cake from the best seat in the house. And they just might spot a very dead stoat.

Pests in the Mātukituki Valley have 2000 chances of meeting their maker, courtesy of that number of traps set out around the picturesque, braided river valley.

The Mātukituki Charitable Trust manages 850 of those traps, set in the West Mātukituki, with various community groups operating the others. The traps, for stoats, weasels, ferrets and rats, are set alongside tracks along the valley floor and mountainsides (pests are lazy and like to follow walking tracks), which are regularly checked and rebaited with fresh eggs and rabbit meat. 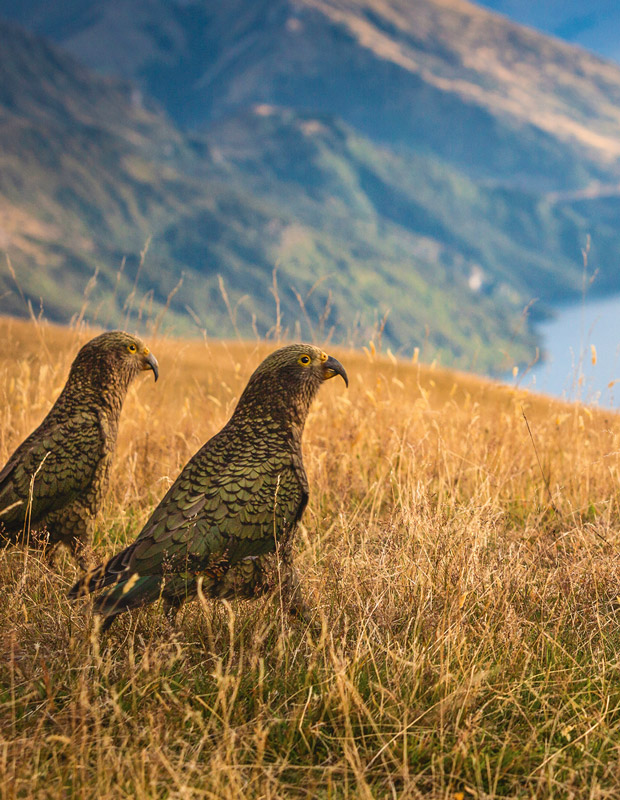 Mātukituki Charitable Trust’s work, and that of other trapping groups, is credited with an increase in bird sightings in the Mātukituki Valley, including the “nationally endangered” kea. Mark now sees kea regularly on his safaris on West Wānaka Station after having not spotted or heard any for some years.

“Having that many traps is about maximizing a pest’s chances of coming into contact with one,” says Mātukituki Charitable Trust trustee, Geoff Marks.

“About 80 per cent of pests will sniff around and not enter, so we create many opportunities for 20 per cent to go in. It’s instant death.”
Luckily there’s a stream of volunteers willing to walk the 20 kilometres, checking the traps.