Actress finds her happily ever after in Rakaia Gorge 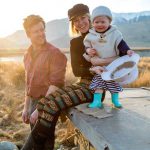 The Dunbars wear a lot of hats: Willa holds dad’s beekeeping pith helmet (Tom often goes without hat or veil as his bees aren’t very stingy and he is very staunch) while Amelia sports one from her extensive collection. “I have a bit of a hat obsession.” 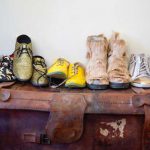 Living in the hills, “we do a lot of things in the backpack”, says Amelia; while Amelia paints in an old pair of dairy farmer’s overalls, outside artist’s hours she’s all about shoes, as long as they’re a little over the top. 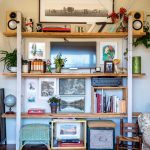 The bookshelf in the living room is made from an old ladder and wood Amelia found in the yard. 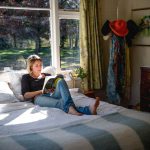 “the sunny bedroom was nice when I was pregnant and sleepy,” she says. “I don’t get a lot of hang-out time now.” 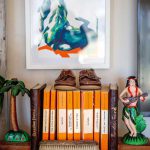 A print of a painting by Amelia called A Tail of Friendship are a pair of teeny-weeny shoes worn by all three Guild siblings. The silver clothes brush was given to Amelia by her godmother. 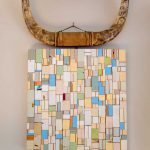 Above a work made from pieces of Christchurch’s broken homes by artist Kara Burrowes are scrimshawed bullock horns depicting the Maori Wars. 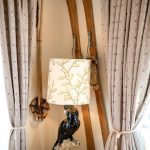 the cockatoo lamp was a gift from a friend who said, “if you can fix the tail, you can have it’. The old wooden skis were a wedding present. “Extraordinary to think you could get down the mountain on them”; the luscious cow painting is by Amelia. 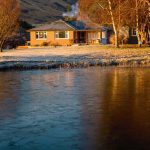 The frozen pond in front of the house waits for spring to wake it.

A storybook house in the towering mountains offers an adorable princess, talking animals, a modest prince and a very funny mummy. She’s a comedy writer, he’s a beekeeper- meet the Dunbars. 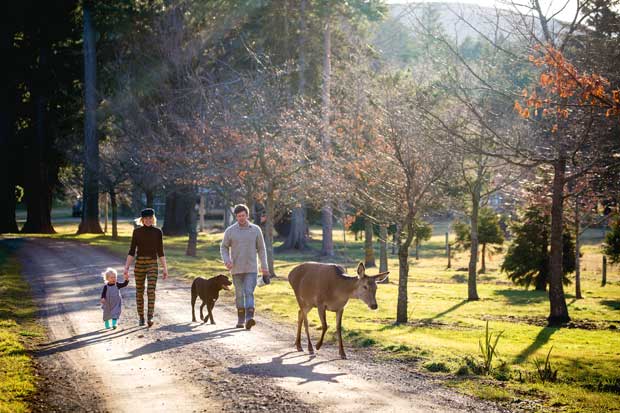 It might be spring in the lowlands but winter is not yet finished in the Rakaia Gorge at the foot of the Big Ben Range. The road climbs and winds between tussocks, poking out of the snow like upside-down foxtails, and occasional cows wander like slightly dim castle guards in huge black overcoats. At 500 metres above sea level, where the road ends, is High Peak Station and the home of Tom and Amelia Dunbar and their eight-month-old daughter Willa.

It seems an isolated place, a gingerbread cottage only a yodel away from a stand of enchanted pines. With towering mountains, woods both deep and dark, and the kind of snow hapless orphans always tend to get lost in, it’s easy to imagine fairy-tale characters like Hansel and Gretel or Badjelly’s Rose and Tim making someone a lovely dinner. The fact is, the whole isolated-high-country-farmer business is complete rubbish (people who live here would actually quite like to be lonely for a bit) and there’s no such thing as witches. Fairy tales, however… they are completely true.
So… once upon a time there was a country-born actress living in Auckland. The fact that she kept moving further and further into its outer suburbs – Titirangi, Muriwai – suggested she didn’t really care for the hustle and bustle of the big city. Luckily ever since boarding school Amelia had been spending her weekends and holidays much closer to home, skiing at Mt Olympus at the southern end of the Craigieburn Range, which is where she met Tom six years ago. “We’re a statistic,” she says. “That mountain has seen a lot of romances.” Romance or no, there hasn’t been much faffing about: in short shrift Tom and Amelia got married, renovated their 1950s brick house and had baby Willa. More than enough to be getting on with, one might think, but then a lovely serendipitous thing happened. Amelia and her writing and performing partner Emma Newborn decided to come up with a talking-animals comedy, a 10-minute piece that would, after some research, eventually become a full-length show. The Bitches’ Box has since been performed more than 200 times, taken on a tour of the nation’s woolsheds and to Edinburgh, where a Times critic called it “the most unexpectedly funny riot of the festival”. The review made Amelia burst into tears. “I was feeling a bit sick at the time.” It’s a proud, if queasy,
career highlight.

Then, overcoming artists’ insecurity and difficult-second-album syndrome, Emma and Amelia wrote a follow-up in early 2016. Sons of a Bitch features two goby terriers who meet some weird town dogs, including a minxy poodle dominatrix who loves a shock collar, a larger-than-life foodie Labrador and a pair of cunning shih tzus. An evening of theatre, comedy and music (singer Mel Parsons joined Amelia and Emma on tour), Sons of a Bitch set tails wagging during a sold-out run of the South Island in April. Back at the station, Tom is a beekeeper who makes honey while the sun shines and when it shines on snow, he acts as a one-stop shop for ski guests. He picks them up, feeds them and helps them navigate the rather intimidating roads and old-school runs (Mount Olympus still uses nut-cracker rope tows, the kind that used to be run by tractors at the bottom). 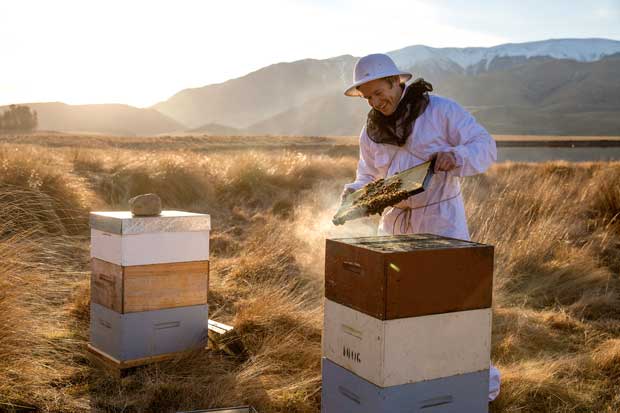 Laconic and super-modest, a mountaineer and high-altitude extreme skier with a world record (which he is very shy about), Tom has a knocked-the-bastard-off Ed Hillary dry wit and an amazing head of matinee-idol hair, which Willa has inherited. That, and his fearlessness. “She’s a climber and takes after her dad all right. I’m a little bit worried,” says Amelia. Tom also harvests three kinds of honey – beech honeydew (from the black beech, only found in the upper South Island, perfect with cheese), manuka and high-country clover. The Dunbars hunt their own meat. “I think if you’re going to eat meat you should be prepared to hunt it yourself. Give the animal the respect it deserves,” says Amelia.

Not for the pot is Mimi the pet deer, who grew up with the family dog Prince Wiremu and has a ridiculous bond with him. “We tried to put her back in with the deer and she freaked out.” With a goat called Gravy taking up the rear, Mimi likes to lead the strange parade of family walks, Willa in a backpack. (This isn’t buggy country, people.) Like Willa, Amelia was born and raised at High Peak. Her two elder brothers, once the meanest of mean (as brothers always are during their snotty years), are now the best-est of best friends. “We all live back here now – mum and dad too. It’s a bit of a commune.” Amelia’s elder brother Simon Guild runs the game estate and partners the snow-tourism business with Tom. Middle child Hamish Guild farms sheep, beef and deer. Amelia is used to the blistering nor’wester that hurtles over the plains and rips through the gorge, battering aptly named Windwhistle (the closest settlement nearby) before tickling the Alps. Tom, on the other hand, is probably New Zealand’s most land-locked mad-keen surfer, chasing waves when he can at Banks Peninsula or Kaikoura. “Which is why he has hives up there,” explains Amelia. “No, no, it’s just the best manuka,” protests Tom, although he has rigged up a board rack under his honey truck. There’s a certain sticky synchronicity at play, as Amelia under the nom de plume Amelia Guild is also an artist who uses surfboard resin in her work. It’s an extremely tricky process involving a hairdryer and a great deal of patience.

Amelia’s 10-square-metre studio looks out onto the cow paddock. “No wonder I paint what I paint.” Cows feature so regularly in her work, it’s become a thing. Their bovine beauty is depicted in bright swathes of unexpected colour, challenging the perception of a rural palette. Some have a magic-eye quality, leading her to joke: “Oh yeah, that’s a cow. Who painted it? Amelia? How many cows can you paint in a lifetime? I’ll let you know.” Unfortunately her studio isn’t completely level, a fact learnt the hard way when the resin on a commissioned piece left for 20 hours to set, ran glacially down one side like a runaway marble traveling a sloping floor to the outside. There, downpipes are chuckling with a sudden thaw and the sun is warming cow’s brows. The snow over the duck pond is melting and under there somewhere must be a happily ever after. ameliaguild.com 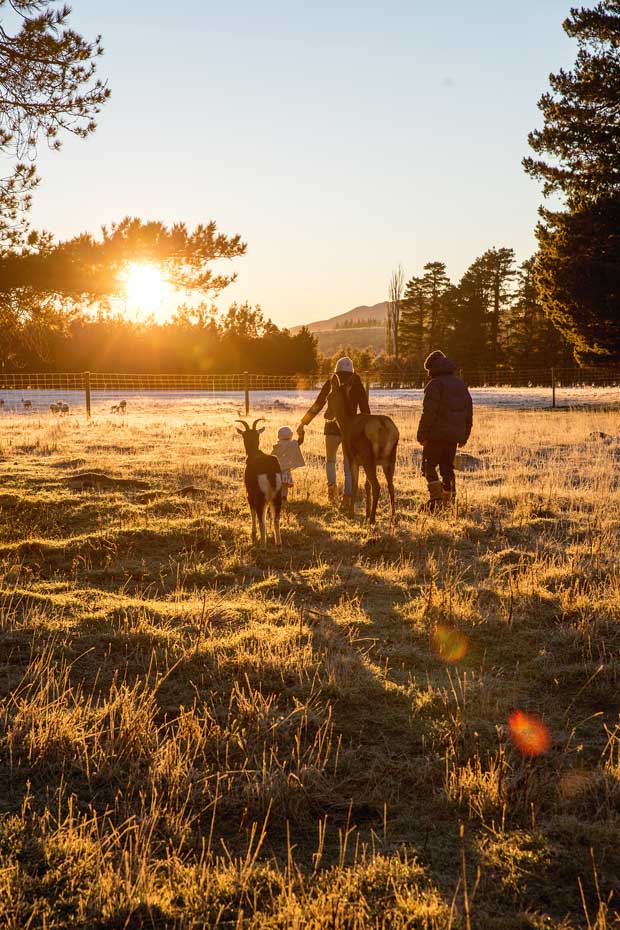 Just how do you write, perform and organize a regional tour of a sell-out show from a small brick house half way up a mountain? “After having Willa I felt really inspired and creative,” says Amelia. “With support I headed to Auckland to work with Emma, who also came down here, and after a month we had a show, refined on the road. Mel [singer Mel Parsons] was already a successful touring artist so we invited her to join us on our first tour of The Bitches’ Box in 2012. The whole thing is very collaborative. We all produce the show. I do the venue bookings and run a big fundraising BBQ before the tour. Mel does press and ticketing. Emma does the licensing. It’s a case of female partnerships working really well. Best thing? We’re in charge.” 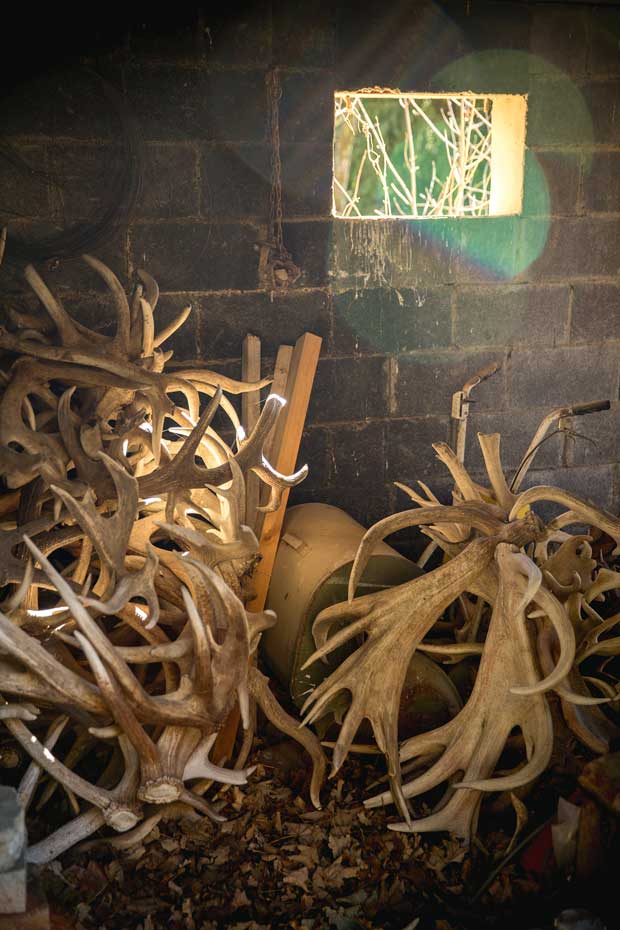 Antlers, antlers, antlers everywhere. Antlers in the garden, piled on a table, acting as hat racks. Deer cast their antlers every year. One minute they’re all “look at me, baby”, next there’s nothing but two pathetic wee nubs on the top of their heads. Don’t worry, they start growing back straight away – deer antler is the fastest-growing mammalian tissue, managing a couple of centimetres a day, which is why it has such extraordinary health properties and deer velvet is harvested and ground down as a tonic. “We all take
it,” says Amelia.