Are quail the new chooks? Why you should consider Japanese quail for your block 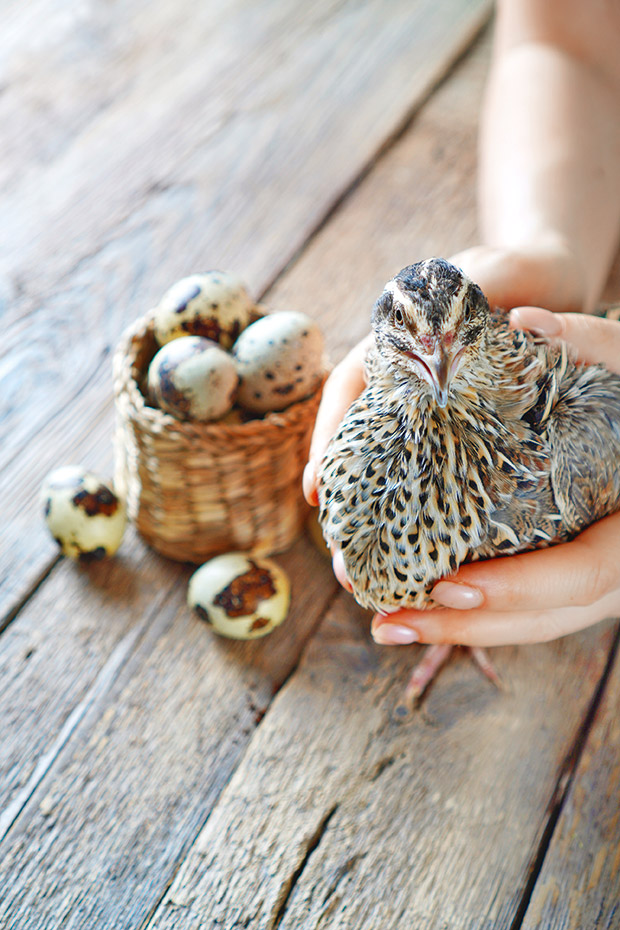 These tiny birds are the easiest and most efficient producers of eggs and meat you can raise.

Even when I’m old and in a retirement village, I’ll have a covey of quails hidden in a corner somewhere. Japanese quail are tiny, a puffball of feathers with head and legs. But they produce way above their weight, laying 300 eggs per year. If they don’t (or are males and can’t), they take just 5 minutes to butcher and taste delicious.

I think quail are like miniature chickens, but better. They’re more productive and the easiest of all poultry in terms of care and housing. Most importantly, they taste better, although you do need a bird (or two) per person per meal. Six birds are ample for two adults.

I use three quail eggs to replace a chicken egg, but the increased nutrients and novelty outweighs any inconvenience. I love tiny breakfast sausages accompanied by tiny fried eggs or bite-size Scotch eggs. My favourite ‘bring a plate’ dish to events is devilled quail eggs: tasty, simple to eat, impressive, and almost no effort. In the wild, quail have quite a short life span, just 2-3 years, but most never reach old age. Predators love them, and their only recourse is to run and hide. To sustain their numbers, they breed and reach maturity quite quickly, growing from a bumblebee-sized chick to an edible bird in just 4-5 weeks.

The hens start laying aged just 6-10 weeks. However, they rarely go broody as they’ve been domesticated for so long, they’ve lost the instinct. That’s good if you want eggs, but not so good if you want to breed them. For that, you’ll need an incubator.

WHERE TO FIND QUAIL

Hatching eggs are often for sale on Trade Me, and you can find live birds for $5-$15 each (depending on their age). There are also farmers around NZ who sell eggs at farmers’ markets.

Quail are easy to care for, which is why I’m such a fan. My six birds live in a round cage 1.5m across (pictured on page 53). I’ve seen pictures of them kept in raised cages in apartments.

The cage fits my 1.5m-wide circular raised vegetable beds. I rotate the quail around the unused beds over winter. It’s close to the back door, warmer, and easy to provide extra light (which keeps them laying).

In summer, when I want the gardens to grow vegetables, I have the cage sitting under the shade of the orchard trees and move it each day. Quail don’t scratch up the ground like chickens and don’t eat a lot of greens.

More stories you might like:
How to control and prevent pests in the garden the natural way 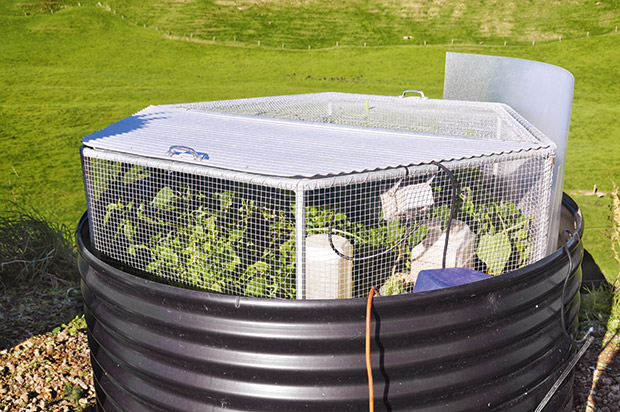 They love hunting for worms and bugs, enjoy the security of grass clumps (or overgrown lettuce) to hide under, and produce a lot of fertiliser (poo). Commercially, the minimum space requirement for quails is 145cm² (12cm x 12cm) when they’re on a barn floor and 125cm² in cages, but this is a tiny space. My cage is 1.7m² – if my garden beds were bigger, I would prefer to give them more space.

The cage is big enough for one male (I don’t add other males or they’d fight) and up to five females. I collect the eggs through a hatch in the top. The only problem with my cage is it’s 30cm high, which I now know is too low. When frightened, quail fly vertically and can injure themselves, hitting their heads on the roof.

A run needs big plants so birds can hide under them and shelter. I’ve found little houses or warm snug, nesting boxes are simply ignored. Quails naturally run and hide and don’t like a space with no exit as a predator could trap them in it.

Their natural diet is mostly seeds and insects, and you can buy specialist gamebird feeds suitable for quail. Newly hatched chicks eat around 10g a day, rising to 50g per day for a mature adult laying hen. You can then change over to layer or meatbird crumbles mixed with blood and bone or meat and bone at the same ratio for adults.

My feeding regime was:

•anything they could forage;
•small bird seeds (which resulted in millet growing through the vegetable beds);
•high protein meatbird crumble, put through the blender, mixed with meat and bone meal;
•finely ground dry eggshells for extra calcium, about a teaspoon a day, dolloped on the ground (no more, or I found they would overdose on it).

I had a cuttlefish bone on the side of their cage for calcium and to keep their beaks trimmed, but they didn’t use it much.

I provide feed ad lib in an old cat biscuit dispenser. The birds scratched the food out and pooed in it until I wired mesh over the tray so they could only peck at it. It works if it stays dry.

Chicks need a plastic tray covered in mesh. Plastic milk containers can be easily turned into feeders and customised for birds of different ages. You can get great instructions and measurements from www.backyardfarmer.co.nz. As with chickens, waterers for newly hatched chicks need to be very low-sided, flat, and filled with stones so the tiny chicks can’t drown. As they get bigger, cover waterers with mesh to prevent them from splashing it out or messing in it.

Quails are one of the simplest and easiest birds to raise.

My only issue has been overgrown beaks in a couple of birds. When it started affecting their ability to eat, I trimmed them with side-cutters (or you could use nail clippers). You can have behavioural problems due to overcrowding and/or a lack of hiding places, with birds aggressively feather-pecking each other. 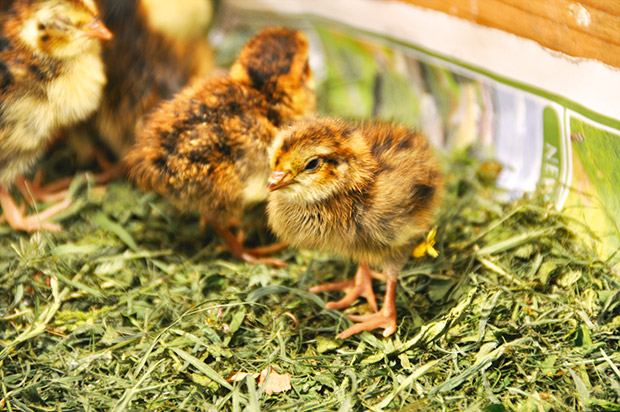 Mature males fight if they’re in a confined space or if there are females around. However, you can run male-only colonies quite successfully, which is good if you want them for meat. Beware of predators. One night a stoat or ferret dug a tunnel under the side of my cage and killed all my birds.

Quail hens pick a spot and usually return to lay in it each day. If you want to encourage that, always leave one egg for them to find when they return. Mine shunned all my attempts to provide any sort of nesting box but seemed to appreciate a bit of straw.

Although they mostly laid their eggs by mid-morning, they could and did lay anywhere, anytime. Hens in peak condition frequently laid more than one egg per day as production can be as fast as 18-20 hours (vs 24-26 for a chicken). A quail will lay 250-320 eggs per year, weighing 6-16g (the average is 10g). Japanese quail don’t go broody. They stop laying once daylight falls below 16 hours. You can extend their laying season by rigging up a low-wattage lightbulb on a timer.

Quail eggs can be incubated in any egg incubator, set at 37.5 °C with high humidity (70%). Eggs hatch at 17-18 days into teeny, tiny 6-7g balls of fluff. Brood the chicks at 38°C for the first few days, then gradually reduce it to ambient temperature over 2-3 weeks.

SORTING THE BOYS FROM THE GIRLS

Japanese quail come in a range of colours. ‘Wild’ or pharaoh is common. The male’s chest feathers are a plain reddish colour versus the female’s dark mottled spots speckled over a light cream background. You’ll be able to distinguish their colouring, and their sex when they’re about four weeks old.

More stories you might like:
How to best feed your chickens (it's time to put down the treats)

Adult female birds are also larger than the males, by about 30-40g or so. You can also sex them at maturity, aged about 8-10 weeks, which is handy if you have the white ones (as there’s no distinguishing feathers). 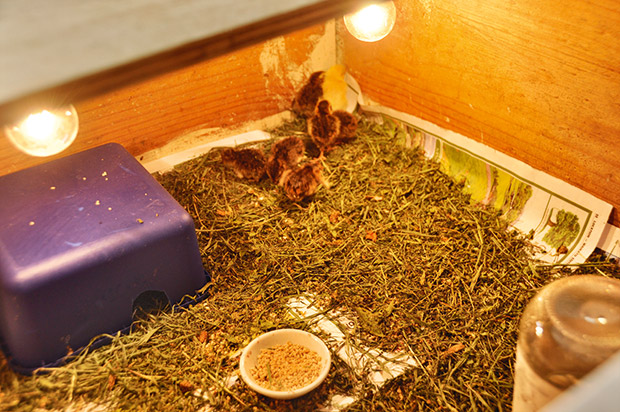 Hold the bird upside down in one hand and look at the vent. Males have a bulb under their tail feather, just above the vent. Very gently push this or squeeze the vent – a male will produce a distinctive white foam.

9 REASONS WHY JAPANESE QUAIL ARE BETTER THAN CHICKENS

1. Need less space, so their housing is smaller and cheaper.

2. Don’t scratch up the garden and eat your vegetables.

3. Can be bred cost-effectively and quickly.

4. Hardy and resistant to pests and disease.

7. Easy to process – you can dress a bird over the laundry sink in five minutes.

8. To eat is simply delicious.

Quails have been domesticated for centuries worldwide. Today, they’re bred in large numbers for egg and meat production. The highest producing country is China, where over a billion birds are raised for meat each year, with another 350 million layer birds.

Spain and France produce hundreds of millions of meat birds, and they’re also bred in large numbers in Italy and the US. Japan breeds six million quail each year for eggs.

Crested Californian quail were introduced to Nelson in 1865. They flourished and were exported to England (canned or frozen). Numbers decreased after the release of stoats and weasels, but they’re still the most common of introduced game birds and can be hunted in most regions of NZ from May-August. NZ’s native quail were very similar to Australia’s brown quail and were widespread around NZ. It was the first bird species known to have become extinct following European colonisation, according to nzbirdsonline.org.nz. Heavy trapping for food meant they had disappeared by 1875.

A beginner’s guide to Japanese Quails