This isolated, retro Waiheke holiday house is like stepping into the 1950s Captured while still in its full mid-century glory, a holiday house on Waiheke Island rejoiced in its original retro attire.

This story was originally published in the Jan/Feb 2013 issue of NZ Life & Leisure.

One day in April 1959 “about 80 friends”, according to The Manukau Progress (“the paper loyal to your district”), boarded a charter launch for Waiheke Island. They were the excited guests of Mr and Mrs D McCallum of Captain Springs Road and were going to the house-warming of the McCallums’ newly finished holiday residence. The new house commanded the ridgeline between Deadmans Bay and Awaawaroa Bay, not the easiest site on which to build, but the house was perfectly positioned and designed to absorb the best of the sun and the views.

The guests were besotted and promptly named it The Dream House.

If they were to return today, they would be thrilled to find it resplendent in its isolated, art-deco glory, barely changed from their first visit. When a house looks the same after half a century, the designer/builder, Mr McCallum, clearly got it right. The retro integrity begs the visitor to enter and admire. Oh my, it’s like revisiting the home of a best childhood friend. Oh my, remember that wallpaper? The same beaten-metallic-style Formica as the bathrooms at boarding school and, oh I don’t believe it, a Reverbiogram radiogram with a drop-down shelf that reveals the turntable. Do kids today even know what an LP is?

And so it happens with every visitor. Margot Robinson, one of the daughters of current owner Clare Hattaway, smiles.

“People always comment on the era,” she says. “They find it fascinating to think that there’s a still a place that’s original and not pretentious: just a great, relaxing place.” The spacious kitchen is a further tribute to retro, including pull-out breadboards and spice cabinet. A Shacklock coal range and what Margot Robinson (daughter of the owner) believes is an electric sterilizer for dishes are never used but retain the character.

Margot and her sister Diane Hill spent most of their childhood holidays on Waiheke Island, on land farmed by their father Keith Hattaway at Little Muddy Bay and Cows Bay, from the 1960s to the 1980s. He also farmed at Whitford; Margot remembers barging cattle and sheep across the Tāmaki Strait between farms.

Sometimes she brought her horse, Goldie, across on the ferry. “I had to hold onto him the whole way. The ferries had open railings then.” 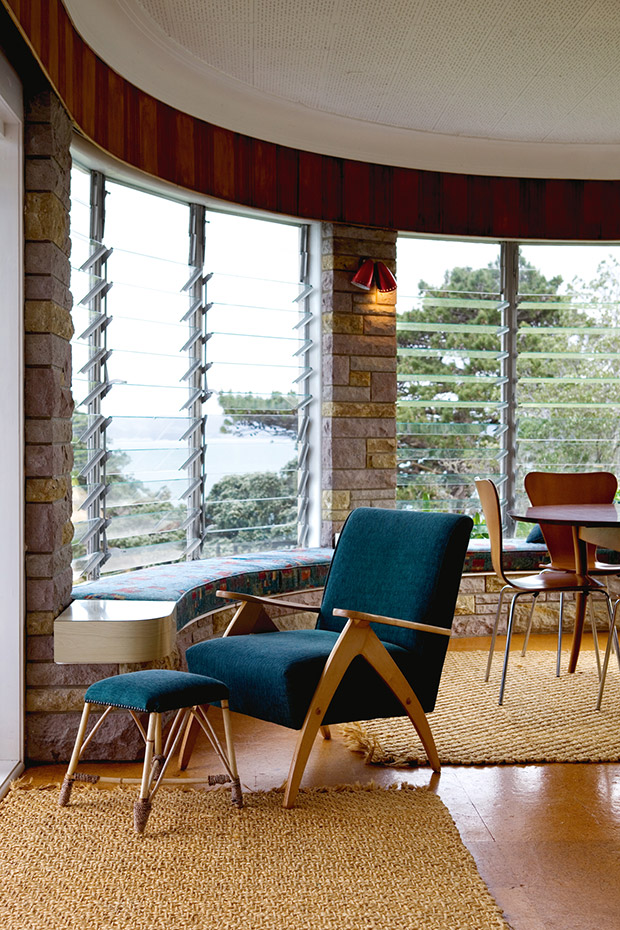 Light pours in from the sitting-room’s large semicircle of windows. A mighty pōhutukawa provides the Christmas decoration. “It’s a big room but it sort of encases you,” Diane says. “If you sit at the dining-table in that curve, it actually echoes.”

After Keith sold the farms, Clare bought the Awaawaroa property to retain the family’s links with the island. The sale included furniture, ornaments, paintings, duck-patterned crockery and the radiogram and LPs.

Clare and Keith often flew in by helicopter, landing either north or south of the house, depending on the wind. The more usual access is by gravel road, about 20 minutes from the ferry at Matiatia. As it had been for the McCallums, the house became the Hattaways’ social centre on Waiheke.

More stories you might like:
Take a tour of New Plymouth philanthropists Bryce and Delwyn Barnett's Lake Taupō bach

Friends anchored their boats in either bay and came for lunch or dinner. What was on the menu? “Seafood,” Margot says. “Mussel fritters – there is a spot we were told to keep very quiet about – snapper kokoda, oysters. We’d put out the flounder net for breakfast.” 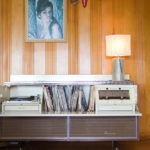 The twin wall lamps and paintings, including a familiar print of a Caribbean beauty, came with the house – another version decorates the main foyer. On many a New Year’s Eve the house has rocked to 1960s’ and ’70s’ LPs played on the radiogram. 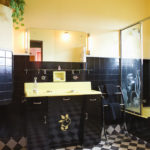 The black-and-white tiles flow through the bathroom, toilet and kitchen. The bathroom of black and chartreuse is retro on adrenalin, if not providing the most soothing soak in the tub. 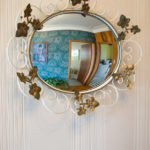 Whether they sat inside or outside, friends could be guaranteed sun and views. If it was windy they could choose whichever beach was sheltered. On New Year’s Eve the house rocked to the music on the LPs. There are still faded boxed sets of Nana Mouskouri and Abba.

After Keith died in 1988, Clare brought friends over, a tradition that stopped only three years ago when she suffered a stroke.

“I used to ring them up and ask: ‘How are the Golden Girls getting on?’” Margot says. “They’d say, ‘Oh, we’re just having lunch’ or ‘We’re getting dressed for happy hour’. If I came down with them, I’d serve the hors d’oeuvres and top up their Pimms. In the main bedroom a panelled interior wall curves around the bed and the dressing-table matches cabinets in the sitting-room – all were custom made when the house was built. There is also a double guest room with views over Awaawaroa Bay and a twin room, providing beds for eight.

“On Saturdays, they’d go up to the market at Ostend and buy their fresh vegetables for the weekend. It really was Mum’s sanctuary.”

Many houses of the era were built to face the road but Mr McCallum designed his to straddle the ridgeline, which means the pathway leads first to the tradesman’s entrance, then to the main entrance overlooking Awaawaroa Bay.

There is a strong sense that the house evolved in his mind for years because it works so well. Diane agrees. “I understand [from the farmer who sold him the land] that he had a model made out of matchboxes that he kept playing with. 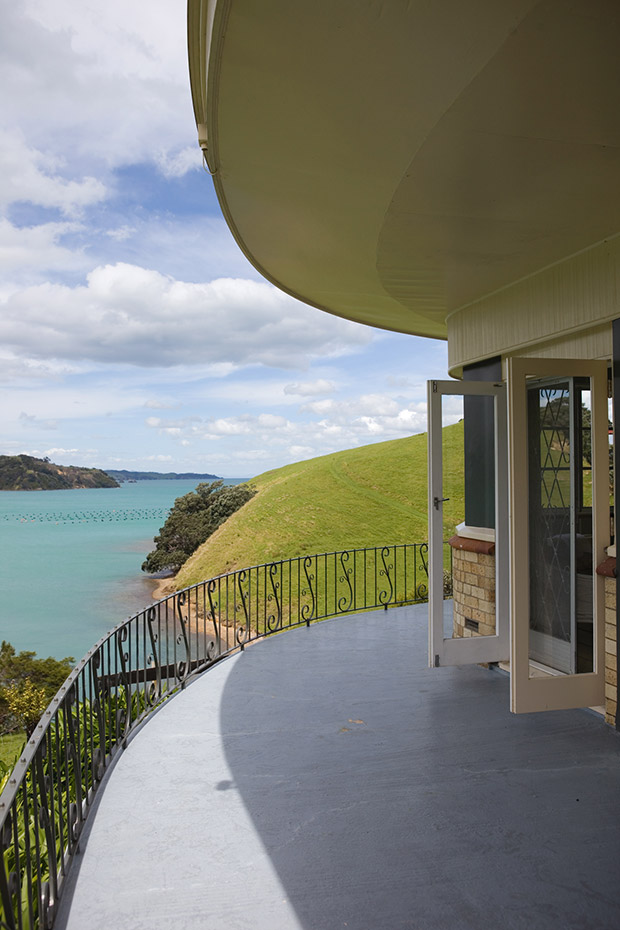 “Then he went ahead and built it,” she says. Diane, with black Labrador Magic, and Margot, with cocker spaniels Jack and Sophie, and their families use the house regularly, entertaining friends, walking the surrounding farmland and swimming and picnicking on the beach.

Guests at the housewarming in 1959 enjoyed these same activities, as recorded in the The Manukau Progress: “but I am sorry to say that they caught only one fish, and that was a tiddler. Most of the ladies went for a tramp over the hills (go on, did they find one? – Ed). Some of the fortunate ones gathered mushrooms.” 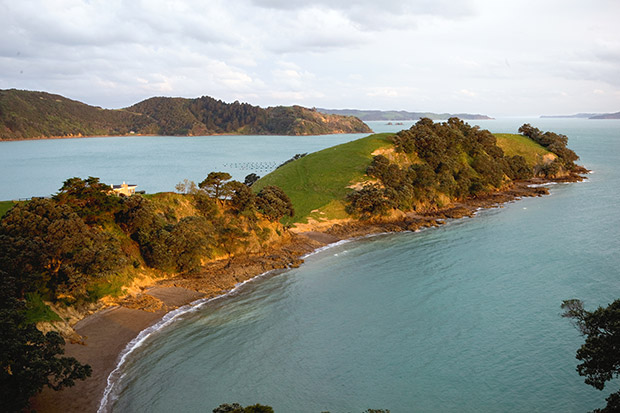 The peninsula separates Deadmans Bay and Awaawaroa Bay – visitors swim and picnic at whichever side is most sheltered.

“This story makes me smile as it reminds me of the flash, new houses of my childhood era with their revolutionary floor-to-ceiling windows and interior feature walls of exposed Summerhill stone.

“I think it is just as gorgeous now as it was then. The house with all the original furniture was subsequently sold and kept “as is”. It is currently for sale again.”

Kiwiana in a Fibrolite bach: Explore mid-century décor, homewares and art preserved in The Butterfly House